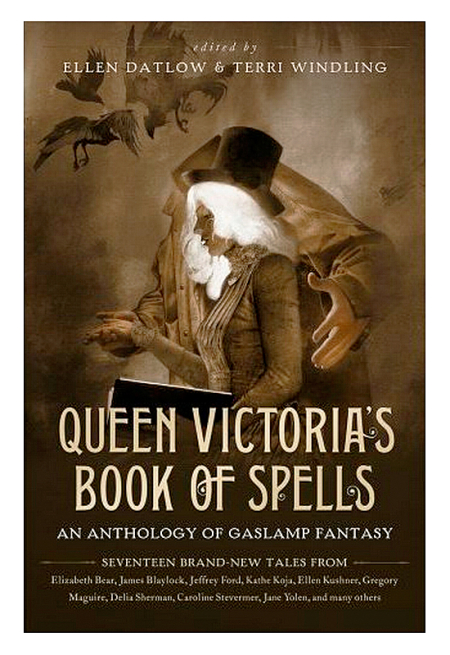 Queen Victoria's Book of Spells presents eighteen new tales of Gaslight Fantasy: a genre of stories set in magical versions of 19th century England. Gaslight tales can properly take place at any time during the 1800s -- from the Regency years early in the century to Queen Victoria's long reign (1837-1901), occasionally straying into the Edwardian era (but ending abruptly with World War I).

Steampunk fiction (which blends 19th century fantasy settings with science fiction elements) receives a great deal of popular attention, yet it is only one form of the diverse range of fiction that falls under the Gaslight Fantasy label -- alongside historical fantasy (without Steampunk trappings), dark fantasy with a gothic bent, romantic tales, detective tales, magical tales set in English boarding schools, and Fantasy of Manners: a brand of fiction that owes more to Jane Austen, William Thackeray, and Anthony Trollope than to C.S. Lewis and J.R.R. Tolkien.

Since good Steampunk anthologies already exist, our purpose in creating Queen Victoria's Book of Spells was to explore and to celebrate the broader genre of Gaslight Fantasy. Some of the writers herein were inspired by classic 19th century texts, others by historical personages (including Queen Victoria herself, in youth and in old age), or by diverse aspects of 19th culture ranging from theatre, science, and politics to Pre-Raphaelite art,  spiritualism, and Victorian fairy lore.

"The collected stories may owe more to Austen and Thackeray than to Tolkien, as the editors point out, but they also owe a great deal more to Dunsany and the Rossettis and Andrew Lang than to Jules Verne. The fantasies in Queen Victoria's Book of Spells are, fundamentally, backwards-looking. Windling's thoughtful and thorough Introduction examines this: what makes the nineteenth century rife with so much potential for fantasy fiction, she observes, is that Victorian England (and America) was itself utterly consumed with the fantastic. The anthology's eighteen stories in this way share a metafictional theme: they draw their inspiration from fairy tales, Arthurian legend, spiritualism, not just the nineteenth century but the fantasies of the nineteenth century. If the Victorians were obsessed with myth, then twenty-first century speculative fiction's obsession with the Victorians takes on a curious, recursive turn; what is it about this period, asks Windling, that we keep going back to? ... Windling and Datlow's Victorian Age is worth spending a few hours in, and perhaps a few more hours thinking about."  - Gabriel Murray, Strange Horizons