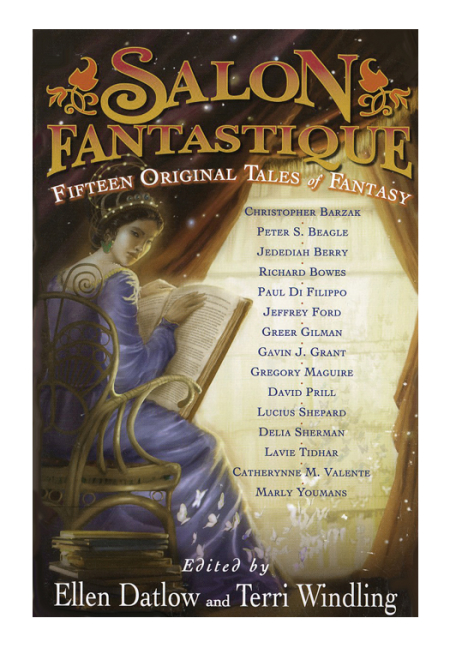 After producing numerous anthologies grouped around central themes, Ellen and I longed to edit a book with no thematic restrictions at all -- simply a collection of stories showcasing the best new writing in our field. Thunder Mouth Press gave us the opportunity to do so.

For many months the book had no name...until we lit on Salon Fantastique. I've long been interested in the literary and political salons of 17th century France, where writers, artists, philosophers, and political figures gathered together in private living rooms (salons), finding creative stimulation in an atmosphere far removed from the strict protocols of the French court. In the salons, men and women could mingle more freely, progressive (even radical) ideas could be aired, and rigid lines of class, rank, and wealth could be crossed in the service of art. Literary salons played an important part in the flowering of French arts and letters from the 17th century onward, just as political salons were instrumental in fomenting the movement that became the French Revolution.

In the history of magical literature, the French salons also played an important role -- for it was in the Paris salons at the very end of the 17th century that Madame D'Aulnoy, Charles Perrault, and others created a vogue for stories in rooted in the folk tradition, coining the name we still use for this genre today: fairy tales (conte de fées).

As Ellen Datlow and I worked on our new anthology, we realized that we were attempting to evoke a liberating creative spirit similar to those of the early French salons by inviting a variety of writers to gather together in the book's pages: exchanging tales, exchanging ideas in literary form. We're pleased that the book includes new writers alongside those with well-known names, and that 11 of the book's 15 writers had never appeared in one of our anthologies before -- since the best salons have always been open to new talent and fresh ideas.

"The newest anthology from Ellen Datlow and Terri Windling could well be their best so far...It's late in 2006, and Salon Fantastique looks very much like clinching the title of Anthology of the Year." - Nick Gevers, Locus Magazine