A video for a rainy Saturday in Devon. . . 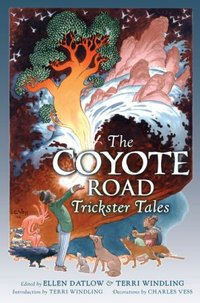 The list of finalists for the 2008 World Fantasy Awards (for works published in 2007) has just been announced.

The Coyote Road, a mythic fiction anthology for young adult readers which I edited with Ellen Datlow, is a finalist in the Best Anthology catagory; and Kij Johnson's brilliant story for the book, "The Evolution of  Trickster Stories Among the Dogs of North Park After the Change," is up for Best Short Story. (You can read it on the web here.)

Also, in the "Special Award" catagory, Midori Snyder and I have been nominated for our work on the Endicott Studio/Journal of Mythic Arts website. We're delighted, of course.

I also wanted to mention that the Endicott Studio has a little news blog now. Much smaller (and thus less time-consuming) than the old Journal of Mythic Arts blog. You'll find it here.

"in the "Special Award" catagory, Midori Snyder and I have been nominated for our work on the Endicott Studio/Journal of Mythic Arts website."

FANTASTIC! That's wonderful news! Do you think you'll make it to the WFC this year?

That's wonderful. I'm glad you were nominated. You both certainly deserve it.

Wonderful! And Congrats to you all!!! I'll be crossing fingers and toes! :)

Amal: No, I won't be a WFC. It's just too far to go, and it's very busy autumn for me (for reasons you well know!)