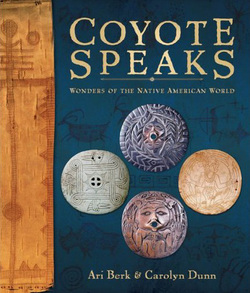 Coyote Speaks, the new book by Endicott Studio regulars Ari Berk and Carolyn Dunn, is finally out! Aimed at young readers, this handsome volume provides a terrific introduction to Native American myth, ritual, and symbolism, in all its rich diversity. Profusely illustrated with paintings, carvings and photographs (including one from another Endicott pal, Stu Jenks), it's a book I'll definitely be giving out to the young folks on my Christmas list this year (paired, perhaps, with my own Coyote Road).  And speaking of coyotes, Carolyn's 2002 poetry collection Outfoxing Coyote is also a gem.

Carolyn, by the way, has two mythic poems in the current issue of The Journal of Mythic Arts.  And Ari has been named the new editor of the Folkroots column in Realms of Fantasy Magazine -- which is a position I recently stepped down from, after 14 years in the job. I'm delighted that Ari is taking it on -- Folkroots couldn't be it in better hands.

My highly intelligent response to this was "Ohhhhh, wow!"