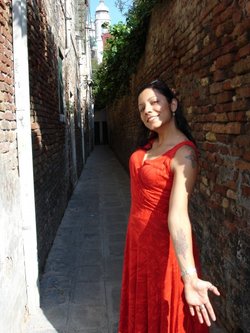 I've never had children myself, but there's also never been a lack of young people in my life -- including one soon-to-be Step-daughter, two God-children (acquired in the usual way: their parents asked me to take that role), and one "Fairy God-daughter" (so-called because we adopted each other as family). I've known my Fairy God-daughter, Guarina Lopez, since she was a whip-smart, book-loving teenager who never went anywhere without her camera in tow. She grew up, became a professional photographer, and has just debuted a stunning new website of her art: Guarina Lopez Photography.

Guarina specializes in portraits of adults and children that range from gorgeous to hilarious -- in fact, some of you might know her work already through her portrait of writer Justine Larbalestier. In addition to portraits, the new site also features a wonderful feminist exploration of women's bodies and concepts of beauty, and arresting pictures of places and spaces from Roosevelt Island to the flea markets of Paris.

"I began photographing when I was 13," Guarina says, "after seeing a book of works at the local library by the photographer Diane Arbus. My inspiration came from the homeless people that I saw on the street and the vagrant group of parentless kids I came to hang out with. In my younger years I had always been interested in the curiosities of the human body and found solace in the 1932 film 'Freaks,' as well as books about medical deformities. What it all comes down to is the human condition. I will forever be interested in the spirit of those deemed less fortunate and the forgotten. I don't think I ever felt a sadness for their differences but instead a beauty, a kind of admiration for the ones that are too easily overlooked or looked upon indifferently. I suppose I still think I can garner wisdom from these forgotten people; that perhaps I can learn to see the world as they do."

Wow, great work. Particularly love the ones of kids.

Her photography is absolutely amazing. So sensuous and soft. I absolutely love it, especially her portraits. I love it when a photographer's work shows just how beautiful every human being is. Fantastic! And of course how could I not love anyone who is a fan of Freaks?!?!