Gavin Grant has announced (on the lcrw blog)  that The Year's Best Fantasy & Horror anthology series has come to an end after two decades of publication. Volume 21, published earlier this year, is to be the last. 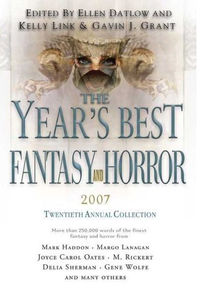 I suppose I ought to say something profound about the series, or about the general state of the fantasy field in this time of economic turmoil . . . but to be honest, I feel too sad right now. It seemed to me that these books were doing good work, performing an important service for the field, and as an editor, a writer, and (most importantly) as a reader, I feel deeply sad that the series is ending.

There are other "Year's Best" volumes, yes, but nothing else like the St. Martin's volumes -- where the series creator/packager Jim Frenkel had the bold and (at the time) outlandish idea to create an annual that would look at the broadest possible spectrum of fantastic literature -- drawing a line all the way from horror and dark fantasy to genre fantasy, to children's fantasy, and further still to magical works in mainstream fiction and poetry. He, and we, took a lot of flack for this inclusiveness in the early years (and, in some quarters, still do); but I remain convinced that it serves our field to bring such works together as part of a broad-ranging conversation, and as an examination of the many faces of nonrealist writing today. 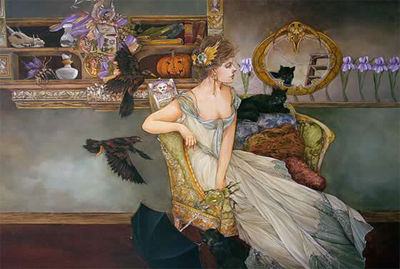 I've nothing against the other, more narrowly focused "Year's Best" books out there (the specialty volumes that focus exclusively on horror or on genre fantasy, for example), and I have nothing but respect for their smart, hard-working editors. These books have different strengths and a different kind of value; and indeed, I read them with pleasure. But it would be a pity if such books were perceived as the only way to publish or to read modern fantasy. In this regard, I believe that the broader focus of YBF&H provided a real service -- not only to readers, but also to the next generation of writers in our field.

Well, as a note from a friend reminded me, 21 years is a pretty darn good run. That's something to be proud of.

It's Jim Frenkel who deserves the credit for producing two decades of YBF&H. The anthology was his idea and his baby from the start. It was Jim who picked the editorial team. Ellen and I knew each other socially, but had never worked together before. Our long, on-going editorial partnership was born in that moment, and for that I'll always be especially grateful to Jim (who had to talk me in to the project, as I recall. I was wary, for it sounded like a helluva lot of work. And indeed it was!)

Tom Canty was part of the series from the beginning, his beautiful art gracing the cover each year, starting way back with volume one in 1988. You have to be as old as we are to remember how radical Tom's delicate, Pre-Raphaelite-inspired art looked on genre covers back then, when muscle-bound, half-naked swordsmen were still the norm. I remember sitting in an East Village cafe while Tom drew ideas on a paper tablecloth. "I don't want to illustrate the stories," he said. "Telling the stories is the writers' job. I want to create a mood, a 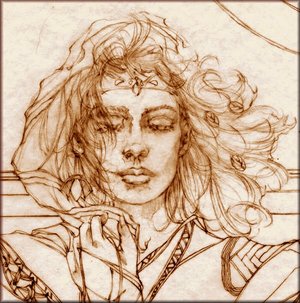 mystery, a magical, iconic figure who catches the eye of readers and says: 'Pick up this book. There are wonders inside....' "   Lordy, looking back, I can't help but be struck by how very young we all were. Young and fiesty and full of ideas and notions that we wanted to explore. Had we know that the series would go on to last for 21 years, we would have been amazed.

In 2003, after 16 fascinating (and occasionally exasperating!) years co-editing the series, I decided to step down. I'd been aiming to last until volume 20 (a nice round number), but a combination of health problems, time constraints, and international postage costs (now that I was spending so much time in England) was taking its toll. It was a hard decision, and I was thus grateful to Jim, Ellen, and St. Martin's Press for allowing me to pick my successor -- and more grateful still when Gavin Grant and Kelly Link agreed to take and share the job. I knew the original vision for YBF&H would carry on and that the volumes would be better than ever -- as they have been. If anything, Kelly and Gavin exceeded my already high expectations. Their books have been smart, fresh, surprising, and full of treasures.

The one bit of good news today is that Ellen, my dear and indefatiguable friend, will be carrying on the Year's Best tradition by editing a series of Year's Best Horror books for Nightshade Press. (You can read more about it on her LJ blog.) And Best American Fantasy, the excellent new series produced by Jeff & Ann VanderMeer and Matt Cheney (Prime Books), appears to be soldiering on. Their second volume is late but still forthcoming; and a third, guest edited by Kevin Brockmeier, has been announced. It looks more and more like small presses may be the salvation of literary fantasy.

I'll raise a glass to Ellen tomorrow, for I'm truly happy that a part of YBF&H will live on in the Nightshade series. Today, however, for me, is a time to grieve for what we're losing.

Jim, Ellen, Kelly, Gavin, Tom, and everyone else who has been associated with YBF&H over the years (Gordon van Gelder, Jim Mintz, Ed Bryant, Charles Vess, Charles de Lint, Joan Vinge, Richard & Mardelle Kunz, Bill Murphy, and too many other people to list but you know who you are): Thank you for all your hard work. If we broadened the idea of what fantasy is, and can be, even by a little, then it was worth it. I'm grateful to you.

If anyone wants to leave a comment related to this post, you're welcome to -- but I suggest that if you post (or cross-post) your comments over on Gavin's blog, they will be part of a wider conversation.... 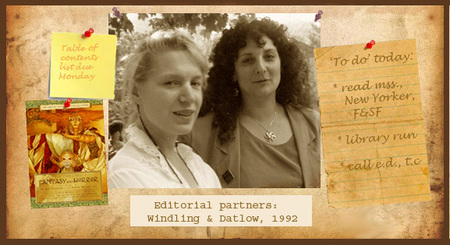 (Not quite the beginning, as we'd already produced the first four volumes by 1992, but close!)

Or maybe we can leave a comment in both places. It was a great run!

I came over here from Ellen's LJ, and I just wanted to say thank you for all your work and devotion. I think every fan of the YBFH anthologies feels a sense of loss. It almost seems impossible that this anthology series--one that has lasted so long and brought together so many in the specfic community--can be gone.

The pictures you posted are lovely, and I enjoyed reading about how it all started with volume one. It's good to know that such enthusiasm can last a long time.

As I expressed to Ellen a day or two ago, your YBFH anthologies were extremely influential to me as I was just gearing up my professional career. Your choices, and your comments about what made the work of value to you and why were invaluable in helping me learn about my own tastes in literature. I'm grateful for the work you did then, and now.

Needless to say, the YBFH were instrumental in showing me not only how fantasy and horror stories are told, but how varied the voices and styles can be. I'm glad you still work with Ellen to produce some terrific YA and middle-grade anthologies (which are read by YA and middle-grade at heart readers).

Don't wanna be part of a large conversation. Wanna sulk. I can't believe this. Those volumes have always been there, in my memory. I am so grateful for what you guys did.

Thank you so much for everything you've done. You've inspired me in so many ways.

I'm teary-eyed and mourning the passing of this wonderful series....

I am so heartbroken to hear this! I’ve looked forward to the collection every year and am still in search of earlier volumes. The books are always a delight to read, a true YEAR’S BEST! All the editors have done an excellent job of finding brilliant pieces from the genre. It’s such sad news that the series will no longer be continued. However, I hope that some incarnation of it does come up in the near future!

Thank you, Terri, for your great contribution to the genre, and your priceless gift to us readers.

I too, am saddened that the series is over. I can remember pouring over volumes during my summer free time growing up. I have so many fond memories from the YBF&H.

I am so sad to hear this news... I have looked forward to these volumes each year - and I feel a great sense of loss. It was an exceptional series. Thank you to all involved for your very hard work. And thank you for introducing me to writers that were new to me long ago, and are favorites now. To all of you - thank you. You have helped me both wake up and dream at the same time for many, many years.

For years, I have based the majority of my reading on your outstanding essays in YBFH -- the stories themselves lasted me less than a week! I'm so grieved the series is ending, but the copies on my shelf are substantial treasures that I'll have always. Thank you, Terri.

I have to thank you for your wonderful work as well as the other editors. The cover art did help draw me in as young teen thing loving Pre-Raphaelite art. Once I read my first volume I was hooked. I loved the variety of stories. They expanded my tastes and expectations of what fantasy could be. The selections introduced me to authors I'm not sure I would have discovered otherwise.

My first task on moving to any town was to scour the library for volumes I hadn't read.

Thank you for adding richness, depth and variety to not only my reading but also to my inner imagination. We all owe such a debt of gratitude to this series as readers and writers.

I can't help but grieve over this series disappearing. Now I'll have to hunt down used copies to hoard and store for myself and my friends.

Thank you for all you've done for fantasy literature and art, and all you continue to do. Your work has expanded my vision of the fantastic, and of the way art and life support each other. Somehow you've always managed to describe and define genre in a way that widens its scope, rather than walling it in.

Because of that, you've given audiences and creators the freedom that art needs to grow and change, and to change others. Thank you for decades of good work, and here's to many decades more!

Very sorry to hear of the demise of this series. It shaped the fantasy genre as we know it today. My thanks to Ms. Windling and all involved.