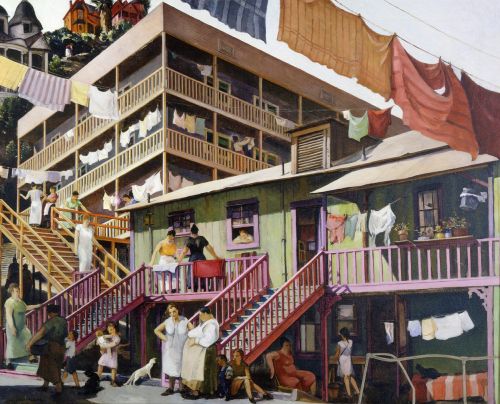 Last night, during a kitchen table discussion about the strange economic times we're living in,  I told my husband and a friend about the Public Works of Art Project created in 1933/34 as part of the New Deal, which kept writers, painters, photographers and others employed during some of the worst years of the Great Depression. (The PWAP itself only ran for seven months, but it spawned a host of other arts programs, such as the Federal Arts Project, that ran up to the early 1940s.) This is an aspect of American history unknown to many folks over here in England...and perhaps to some Americans as well. As Elizabeth Broun writes: "A glance back to the 1930s shows that many New Deal programs were innovative, even radical, in treating artists, writers, and playwrights as workers deserving of support. This was new in America, where artists since colonial times had been considered marginal “extras” in our society. John Singleton Copley (1738--1815) complained that he was regarded as 'no better than a cobbler.' Thomas Eakins (1844--1916) lamented that 'My honours are misunderstanding, persecution, and neglect, enhanced because unsought.' John Sloan (1871--1951) famously said, 'The artist in America is regarded as the unwanted cockroach in the kitchen of a frontier society.' All that changed in the mid-1930s, as New Deal programs were created for unemployed artists eligible for government relief. Artists, newly defined by their government as workers, produced an unprecedented number of artworks, literary works, and theatrical performances, launching careers for many who became famous in later years. President Roosevelt is said to have declared, 'One hundred years from now my administration will be known for its art, not for its relief.' "

You can read Broun's full article in the March issue of History Now. (The  entire issue of this online quarterly journal is devoted to the Great Depression, and makes for fascinating reading.)

As it happens, there's a very timely show of art works from the PWAP at the Smithsonian in Washington DC right now, where it will run until next year and then travel to other museums around the country. You can see a terrific slideshow of the art from the exhibition on the American Art Online website. The paintings from the show that I've posted above are by Millard Sheets, Earl Richardson, and Ilya Bolotowsky.

Such an amazing program and so many important projects funded by the WPA. I work at an archive and we have a wonderful set of books compiled by WPA workers at the main branch of the public library that feature bios and information on local artists, authors and prominent women in the area. I can only imagine that a great deal of this information would have been lost over the years if it had not been preserved in this series.

It's the work of artists that keeps me going when times are grim. Art stitches our work into meaning.