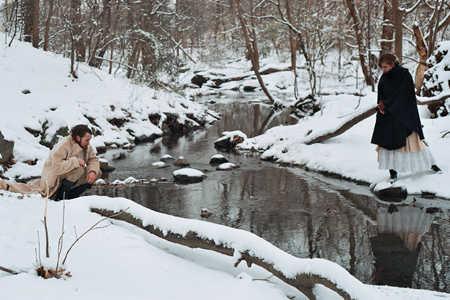 Lisa Stock's short film "Brother and Sister" is set in a magical, snow-covered landscape that is perfect for a dark Solstice Eve. Inspired by a poem of mine, which in turn was inspired by a fairy tale from the Brothers Grimm, the film stars Seth Harris and Michelle Santagate, with gorgeous music by Priscilla Hernandez. Shot in New York City last winter, the completed film can now be viewed online.

Lisa recommends starting with the "Brother & Sister: Behind the Scenes" clip, and then moving on to the film itself. Both can be found on the Vimeo site.

My heartfelt thanks go to Lisa and the InByThe Eye crew for turning a few simple words on a page into a dreamlike, haunting, and myth-shadowed vision on film. I feel honored indeed.

Gorgeous! Perfect for the winter's solstice!
The poem is so magical and earthy too <3

A classic. Thank you, Terri!