The best of my birthday presents...
Print Sale - update 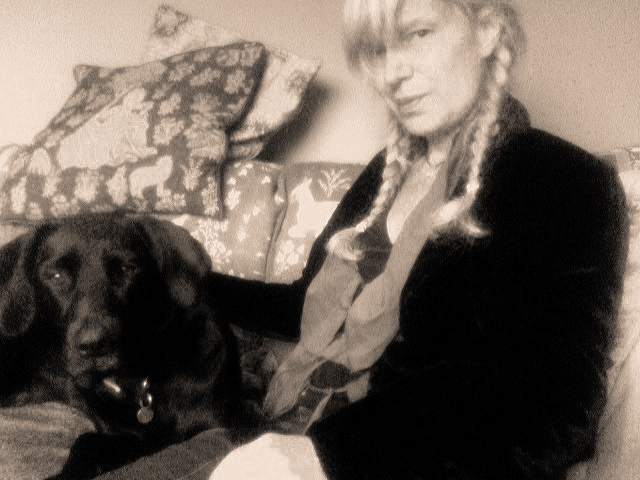 Being down with flu gave me a lot of time to post here (my brain being useless for anything more taxing), but it hasn't been very good for my work. So I'm going on a short hiatus after today's post in order to catch up again, and while our French visitors are in town.

It's my birthday, by the way, and as of 2:05 this morning (the time of my birth in the middle of a snow storm on the Fort Dix army base in New Jersey) I'm 52 years old. I decided to say that because there's such pressure in our culture for women...well, for everybody...to stay perpetually young. And that's never going to change if we (women especially) don't embrace, enjoy, and take pride in each and every age that we pass through.* I'm not young, I'm half a century old, and grateful to have made it this far. And I have this to say to the young women coming on behind me: 52 feels pretty damn good!

One final thing before I go: Theodora Goss (author of In the Forest of Forgetting) has a nice post up on her blog today called "My Writing Life." Her evocation of a writing day that involves moving between several different commitments and projects, rather than working on a single manuscript at a time, definitely rings true for me.

Now I'm off. Tilly and I (and the bunny girl cast of thousands) will be back some time next week, so cheers 'til then.

*On the subject of aging with spirit, wit, and grace, I'm reminded of the "then and now" page that was put together for the Endicott Studio's 20th anniversary a few years ago.

Very HAPPIEST wishes to you! I have never commented here before-- but read regularly and am so grateful to all the inspiration you provide here so I feel compelled to peek my nose out of my warren and wish you a wonderful birthday. I wish that your day (and every day that follows) is filled with much love, light and laughter.

As another 52 year old, I can say that it is a great year. Each year holds new meaning but as I get older I seem to enjoy life even more.
Happy Birthday!

Wishing you a wonderful birthday!! Sending you lots of good thoughts for a lovely weekend. (I'm 37, by the way, and am excited to hear that I have lots to look forward to during the next 15 years. :))

You look beautiful, strong, and lively. Could there be anything better?

May you have a wonderful year, full of many good surprises and few bad ones.

Wishing you a very Happy Birthday!
And I hope you enjoy a good and productive catching-up period.

A very Happy Birthday to you, Terri! May the day and the coming year bring you much joy.

A happy, happy birthday to you, and many more!

Belated birthday but heartfelt wishes for a beautiful and magical year:)

Happy Birthday :) I hope you had a nice party with cake and friends and more cake.
Even though I'm not yet halfway where you are, 52 doesn't sound old to me. When I look at myself.. I live in a flat share for which my parents pay the rent, we are not allowed to have pets (not that I could afford one) and vacation? What's that? You own a house, have a nice husband and a really cool Tilly, travel to the US several times a year, make money with work you love and hey, there are lots of people younger than you that look older. I guess it's that thing about curiosity and joy keeping us young and beautiful at heart. But what do I know? I'm not even half as ol.. ehm, wise as you ;)

This is a little belated but just wanted to say Happy Birthday, hope you had a fantastic day. You're right about women being expected not to admit their age, it was wonderful to read you say 'I'm 52 years old' (and that 52 feels pretty damn good!). Thank you for always being such an inspiration. Claire (29)

Belated Happy Birthday Terri! It is so true that women are pressured to stay young and beautiful by our society.Being beautiful is so much more than botox and plastic surgery ! I am 63 and feel probably more lively and interested in things than I was years ago however I have a younger husband and to be honest although I know that youth and good looks are not the most important thing I still want to be attractive to him and find the whole aging process quite frightening when I am low .You are so right to draw attention to this subject Women need to help eachother with this one. You are great,wise and an inspiration so be happy .Beauty seems tobmean so much more to me as time passes ,I mean nature ,art,good writing aand good people.Well I opened up on that one !! All the best to you and your family.

Happy birthday and wonderful winter holidays to you!

My Friend, there is not a December third that dawns I do not think of you and the golden place we created in the storms of time.

Thank you for holding my little hand, and for allowing me to hold yours.

I will always love you.

Oh, I hope you had a beautiful birthday, and I wish you a brilliant upcoming year. You are very nearly birthday twins with my sister (she is 2 December) - it seems a time for wonderful women to be born.