Today, a Motown classic: "I Heard it Through the Grapevine" -- a tune that takes on new meaning (in a tongue-in-cheek way) during a week in which phone hacking has been dominating the headlines here in Britain. ("Bet you're wondering how I knew," say lyrics, which is a question being asked in many quarters of the UK government, press, and police right now....) Not to make light of the scandal, which is appalling -- but there's a point when things are just so astonishingly awful that you've got to reach for humor to keep your spirits up.

Written by Normal Whitfield & Barrett Strong, the song has been recorded by a remarkable number of bands and singers including Smokey Robinson and the Miracles (1966), Gladys Knight and the Pips (1967), Marvin Gaye (1968), and Creedence Clearwater Revival (1970)...as well as Stevie Wonder, Tina Turner, Elton John, The Slits, The Kaiser Chiefs, and even Fairport Convention.

Above: Gladys Knight and the Pips, on the "Soul Train" television show (US) in 1970.  (I remember seeing this as a kid, and practicing those Pips dance moves with my three adored aunts: Cindy, Sally, & Sue.)

Below: Amy Winehouse and Paul Weller on The Jools Holland Show (UK) in 2008.

Amy Winehouse was born in North London in 1983, recorded her first album (Frank) in 2003 -- and (as most people have heard by now) died this past Saturday, age 27. Rest in peace, dear lady, and thank you for the extraordinary music that you left behind. 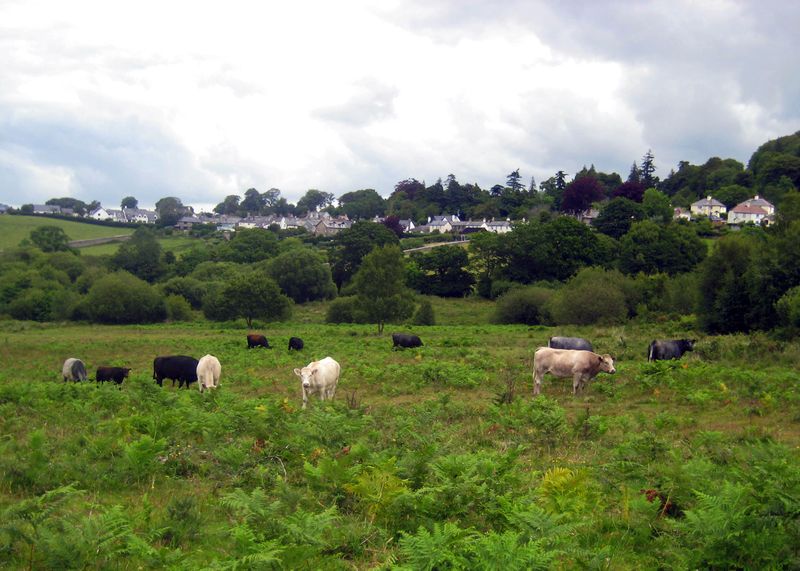 Bullocks on the Village Commons (click for larger version)

* The fabulous summer edition of Goblin Fruit is live and waiting to be devoured. There's a weekend's worth of great reading right here...but if you want more:

* Erzebet YellowBoy discusses the process of becoming an artist, with the help of cartoonist Jellyvampire, at I Saw an Angel.

* Howard and Rex have posted more comic pages at John Barleycorn...going into the world of the "mundus" this time. (I've just been into their studio next door to see them, and they look great. The pages, I mean. Howard and Rex, that's another matter....)

* There's a fascinating article on ancient beers in The Smithsonian, one on the artist Lee Krasner in Tablet, and a good article on Virginia Woolf's later essays in The London Sunday Times.

* Today's art recommendations: First, check out the magical portfolio of English illustrator Brett Ryder (via Phantasmaphile). Second, oh how I love Rabbit in Front of a Mirror by the German painter Michael Sowa. (For more his work, go here.) Third, have a look at the "leafcuts" of Spanish artist Lorenzo Duran at Naturayarte (via Ruthie Reddon). And fourth, for you New Yorkers: "Horus' Daughter," an exhibition at "Cinders Gallery" in Brooklyn, looks mythic and interesting. Could be fabulous, could be dreadful, hard to tell.

* Today's fiction recommendations: First, "Demons, Your Body, and You" by Genevieve Valentine, in the YA Fiction issue of the Subterranean Press online magazine, edited by Gwenda Bond. Second, "The Wolves of Brooklyn" by Catherynne M. Valente in Fantasy magazine; plus, an interview with the author here.

* Today's poetry recommendation: "A New Kind of Map" by Christina Cairns at A Mermaid in the Attic. And be sure to follow the links back to the posts by Rima Staines and The Dark Mountain Manifesto that inspired the poem.

Beings of light and clay... 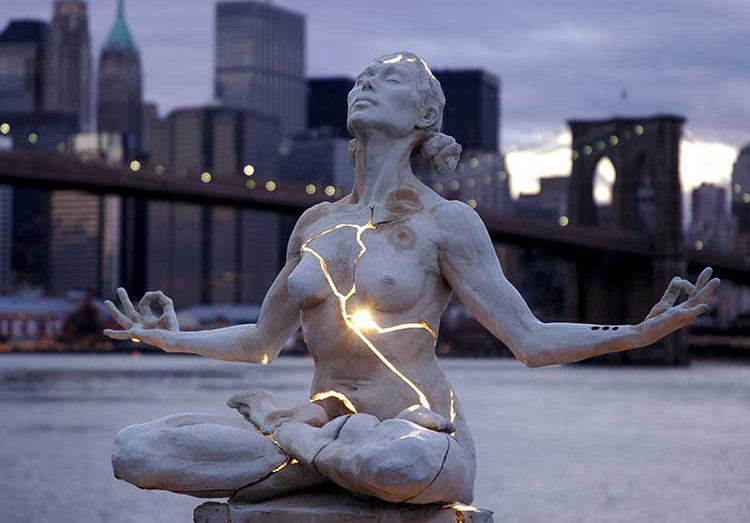 Speaking of light (as I was a couple of days ago), I absolutely adore the beautiful and deeply philosophical sculpture above: Expansion by Paige Bradley.

"From the moment we are born," says Bradley, "the world tends to have a container already built for us to fit inside: A social security number, a gender, a race, a profession or an I.Q. I ponder if we are more defined by the container we are in, rather than what we are inside. Would we recognize ourselves if we could expand beyond our bodies? Would we still be able to exist if we were authentically 'un-contained'?"

A related piece, Alapadma, is below. "I want to advocate healing and empowerment for people around the world," says the artist. "I want my art to be a forceful voice to help those who suffer from illness, repression or exploitation. My sculptures express a depth and variety of the physical, emotional and spiritual that we search for as a human race. Simultaneously, I want to provoke us to feel painful truths we keep bottled up inside. I want us to remember we are all the same. And, it is this understanding that can heal us all." 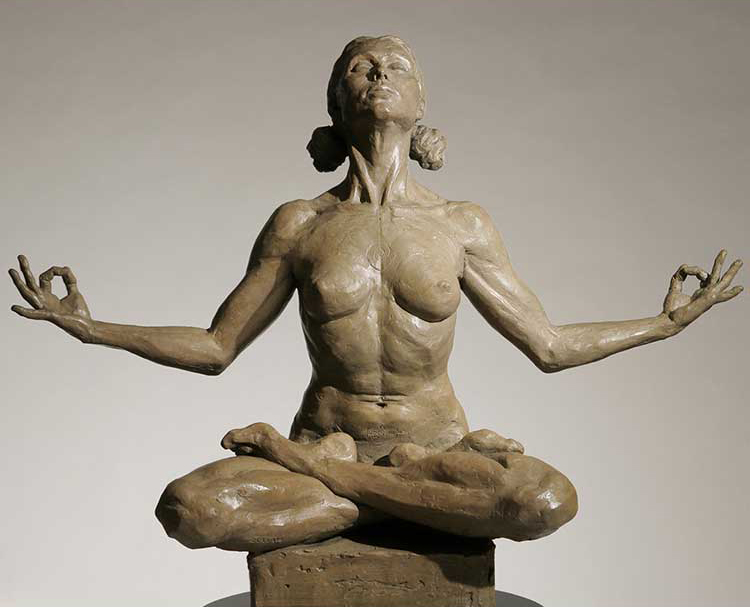 Bradley was born in Carmel, California; studied at Pepperdine University and the Pennsylvania Academy of Arts; and now lives and works in London. "My recent work has become a symbol of struggle -- both being contained and liberating ourselves from self-inflicted boundaries. Fears of ostracism, avoiding distinction and hiding from greatness are all thoughts that come to mind.These fears create sculptures wrapped in extraordinary tension. The figures struggle to unveil themselves in order to become understood and known. These bound figures give me a sense of unrest as if too much life is jammed into too restrictive of space. I feel as if I am trying to live my truth free and unveiled in a society that would rather keep us contained." 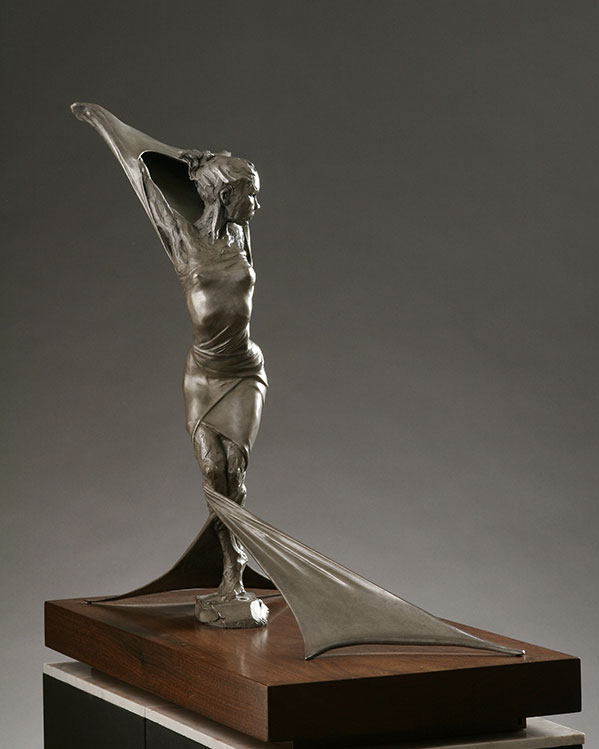 "Here is my submission for On Your Desk. It's put up with a touch of sadness because we've just moved out of our Edwardian home of 13 years, in Eastleigh, Hampshire (UK). I am a graphic designer and stalled artist, but because of illness I'm not working at the moment -- hence the decision to sell up and downsize to a smaller rented house.

"The picture over the fireplace is by Ed Org, who is a favourite artist of mine. The fairy in the globe was bought by my wife, as a Valentine's Day present, to watch over me." 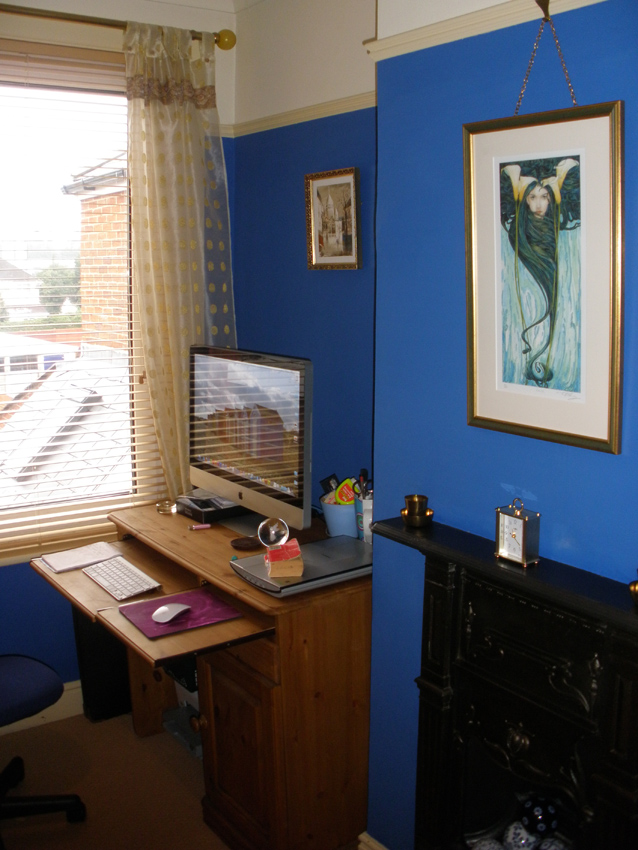 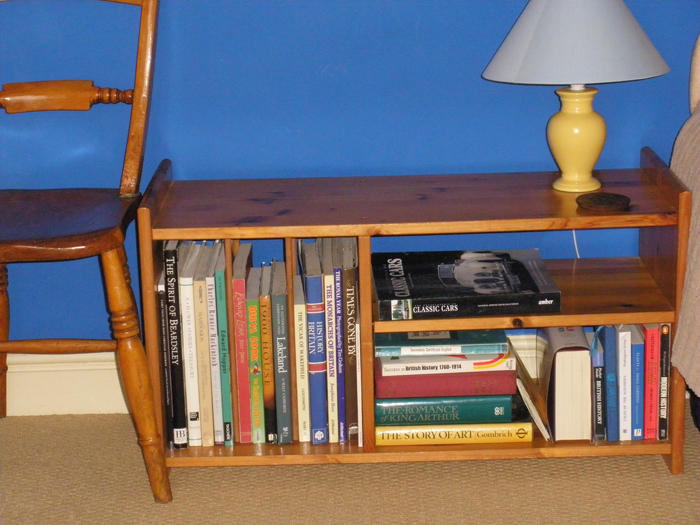 "The next three photos are from our new house, located on the outskirts of a attractive market town not far from Winchester.  It's amazing how having your favourite things around you can transform a characterless 1980's box into a home.

"As you can see, it's a lot greener here and I have my morning coffee looking at a grand old Oak tree which fills me with joy. Hopefully this will give me the peace and inspiration to get the pens and paint out again." 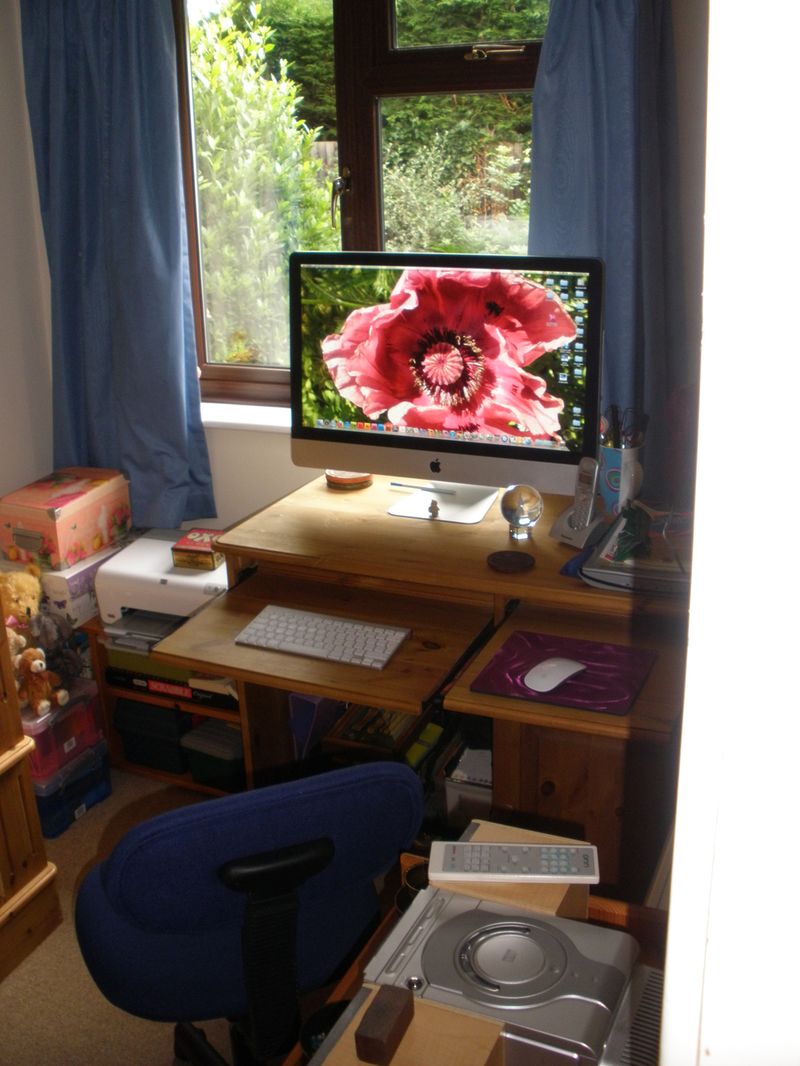 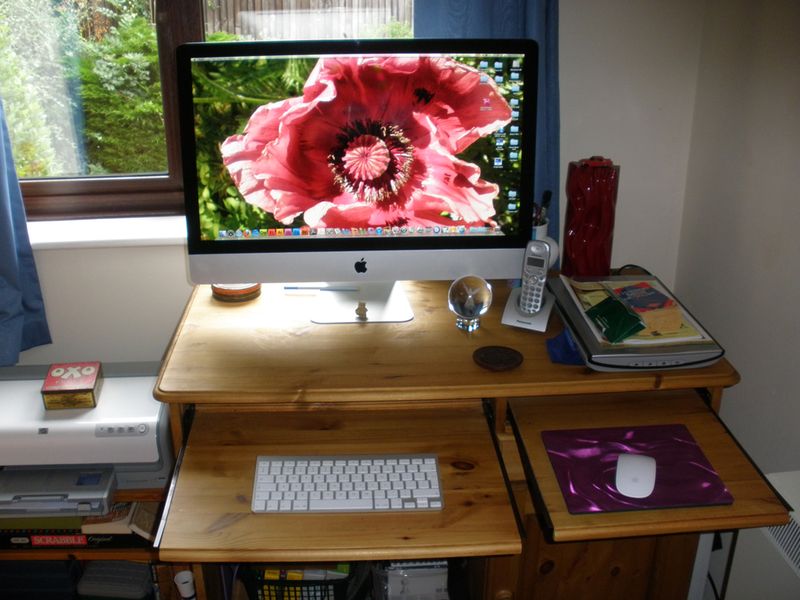 Thank you for contributing to this series, Brian. I'm sure everyone here will join me in the wish that your new home be filled with health, joy, and abundant creativity!

All readers of this blog are welcome to contribute to the "On Your Desk" series. You'll find more information (and the address where you should send your photo) in the first post of the series, and you can view the full series here. 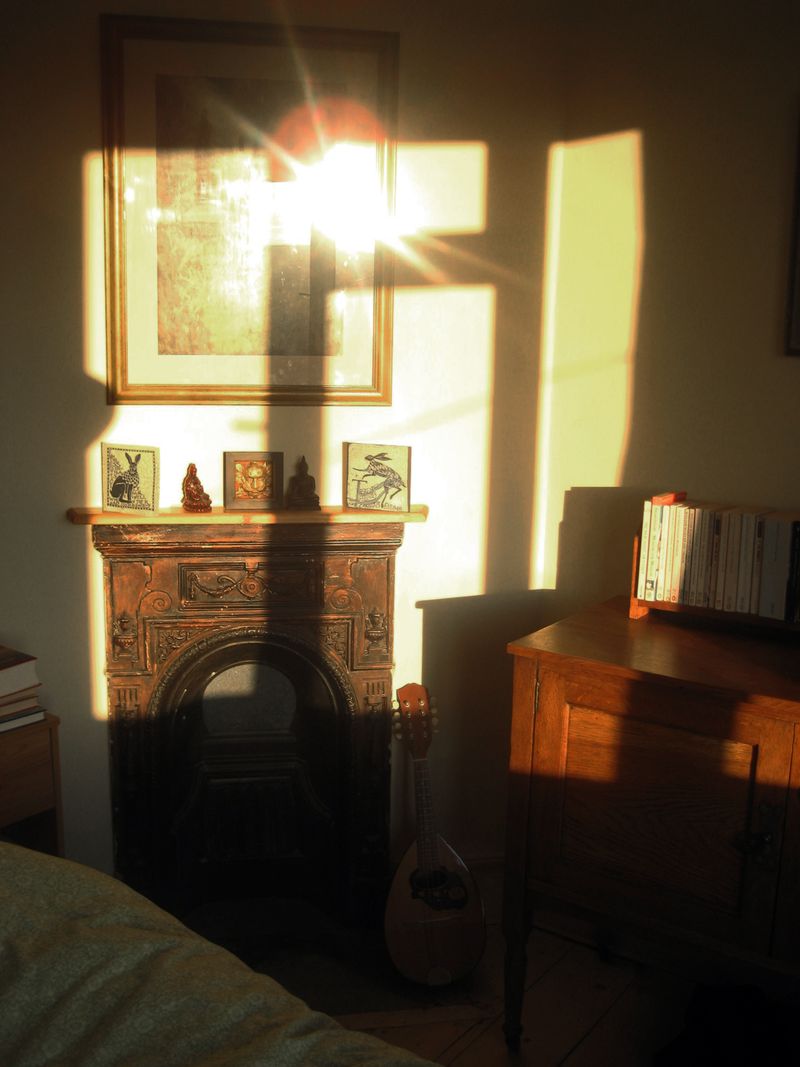 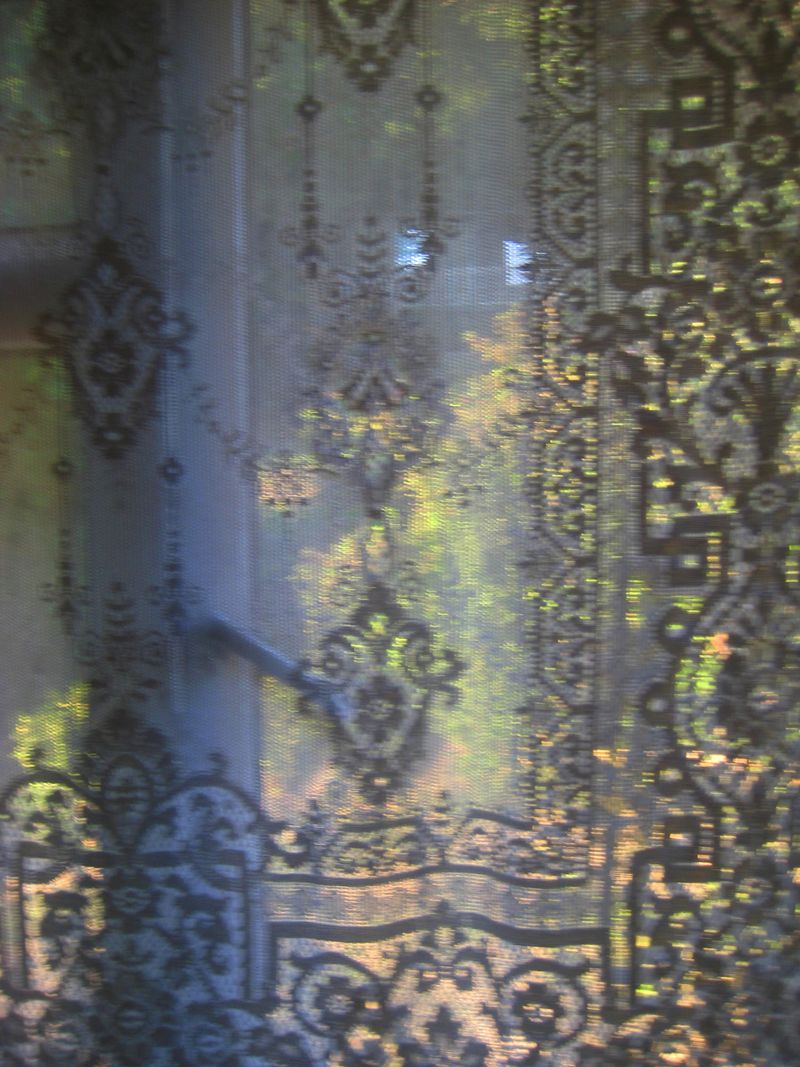 "From within or from behind," wrote Ralph Waldo Emerson, "a light shines through us upon things, and makes us aware that we are nothing, but the light is all." 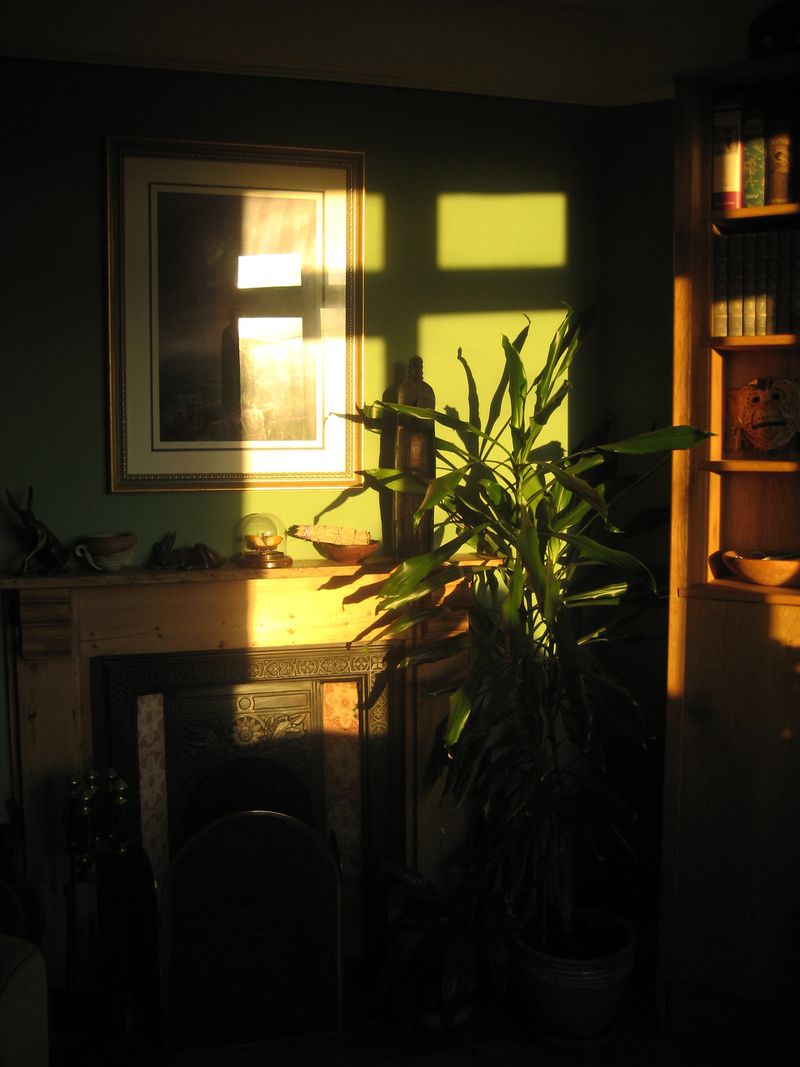 Diane Frolov and Andrew Schneider have noted: "Ever since we crawled out of that primordial slime, that's been our unifying cry, 'More light.' Sunlight. Torchlight. Candlelight. Neon, incandescent lights that banish the darkness from our caves to illuminate our roads, the insides of our refrigerators. Big floods for the night games at Soldier's Field. Tiny flashlights for those books we read under the covers when we're supposed to be asleep. Light is more than watts and footcandles. Light is metaphor. Light is knowledge, light is life, light is light." 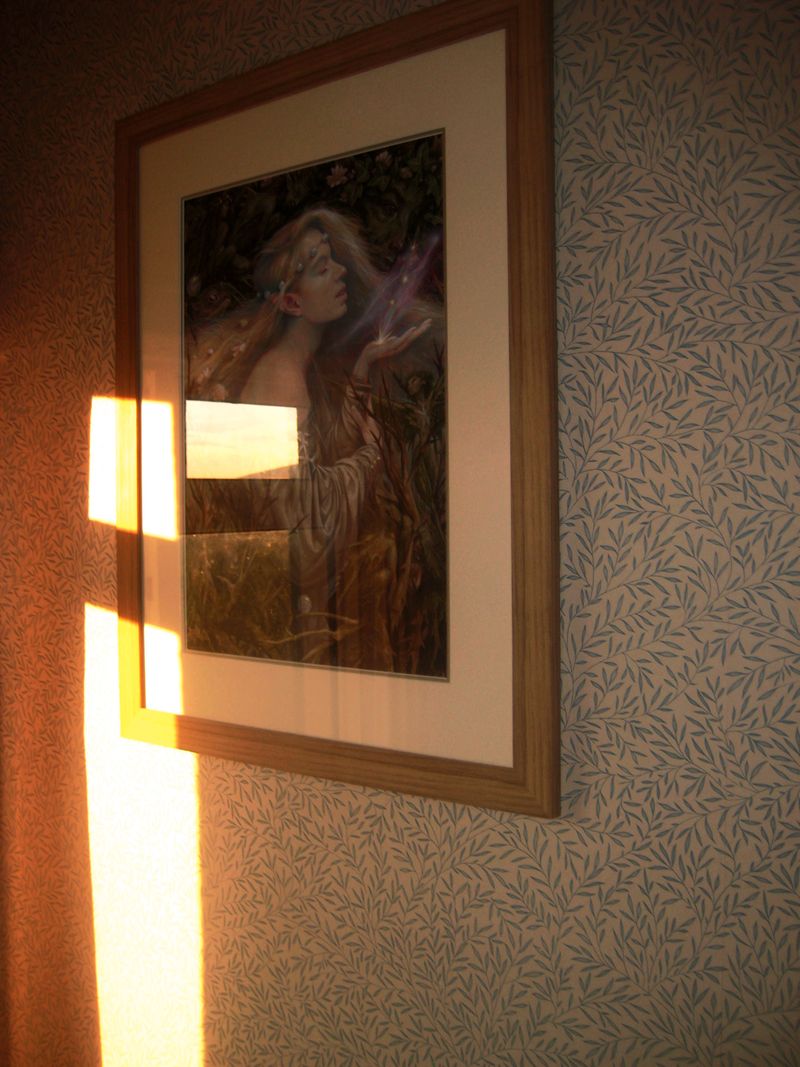 The French painter Yoann Lossel said a lovely thing in a recent discussion on the John Barleycorn blog.  "Oil painting," he said,  "nourishes itself on light,  and on time -- both the time that passes, and the time you put into it. In this way, it nourishes the artist in turn."

I haven't been painting recently. Both light and time have been in short supply. But I'm laying out the brushes, sorting through colors, and waiting for a break in the clouds. 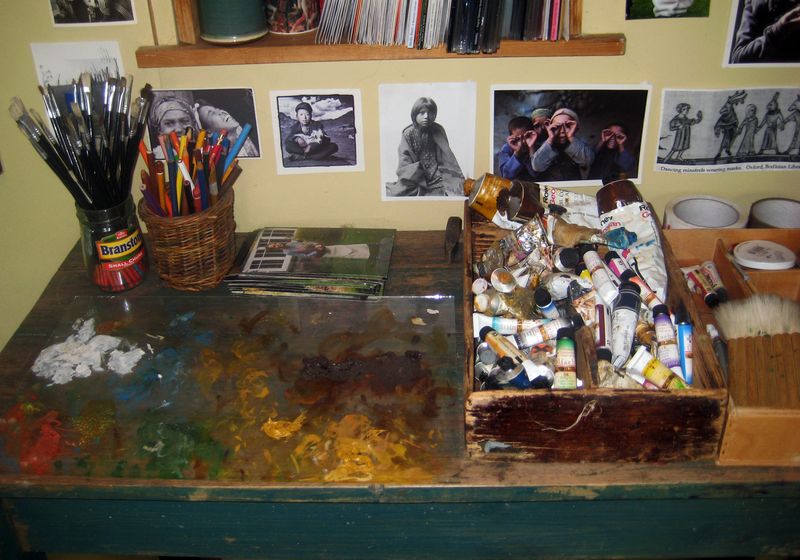 in On the creative process | Permalink | Comments (11)