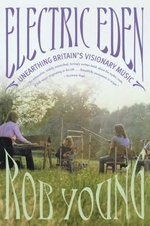 I've been listening to Liege & Lief and a number of other classic British folk albums recently, while reading Rob Young's new book, Electric Eden: Unearthing Britain's Visionary Music. This fat, fascinating volume documents the history of British folk in the 20th century, including a large section devoted to the influential bands of the '60s/'70s -- Fairport Convention, Pentangle, Steeleye Span, The Albion Country Band, The Incredible String Band, etc. etc. -- with information ranging from insights of music scholarship and historical context to pure gossip about who was sleeping with/living with/working with/feuding with whom. Young sometimes rambles a bit in his narrative, but this comes out of an endearing enthusiasm for his subject. I've been thoroughly engrossed by Electric Eden and recommend it highly to all who are interested in the British folk music scene.

Below is a video filmed back in the day: Pentangle performing "Hunting Song" on the BBC, circa 1970, with vocals by Jacqui McShee and Bert Jansch. The second guitarist (who was Jansch's flat-mate during those years) is the legendary John Renbourn.

And here's Steeleye Span perfoming "Lark in the Morning" in 1971. The band members back then were Martin Carthy, Tim Hart, Ashley Hutchings, Maddy Prior, and Peter Knight.

The gorgeously atmospheric video above is the new trailer for Kathrine Langrish's novel Dark Angels (published in the US as The Shadow Hunt): an historical faery fantasy set in the hills of medieval Wales. I absolutely adore this YA novel, and want it to be far better known that it currently is outside the UK -- so please check out the trailer, which will surely whet your appetitie for the book if you haven't read it already. (I think the US cover makes the novel look like it might be just for kids, without adult appeal too -- and this is certainly not the case!!!!) Also, Kath is currently running a contest to give away three signed copies of the book. You'll find the details over on her blog, Seven Miles of Steel Thistles. Please spread the word!

This other week's magpie gleanings:

* Robert Parry discusses Stunner: The Rise and Fall of Fanny Cornforth, a new biography of Dante Gabriel Rossetti's model and mistress, by Kristy Stonell Walker. (I gather the book is self-published and may not be entirely professionally produced, but it looks interesting nonetheless.)

* Art recommendation: Don't miss David Wyatt's "Comfort in Quilting,"   which is a thoroughly enchanting picture of a mutual friend here in the village, posed with her dog Ozzie (a great pal of Tilly's), against a background of William Morris fabrics and wallpaper. The painting is part of David's "Local Characters" series, and like all the others in the series, it's simply gorgeous. Also, check out the "Craftydermer" exhibition profiled in The Guardian. ("Mr. Fox" by Emma Cocker is particularly charming.)

* Video recommendation this week (in addition to the trailer above): a timelapse film of an acorn turning into an oak tree on the New Scientist site. The magic of nature indeed.

* And a few last bits & pieces:  Howard & Rex send a postcard from their holiday travels on John Barleycorn. There's a really lovely review of the French edition of my novel The Wood Wife,  by Clémence Fournerie, at the Fees Divers site (for those of you who read French). And I've recently been introduced to The Black Letters, a terrific literary blog "celebrating all aspects of bibliophilia, with a slant towards speculative fiction," written by "ravening bibliophiles" Kakaner and Emera. I particularly love the Booklish: Bibliophile's Kitchen posts, where you can find such delicacies as Jonathan Strange and Mr. Norrell Black Forest Raven Cake and Matilda Honey Oatmeal Scones. (via Ellen Kushner) 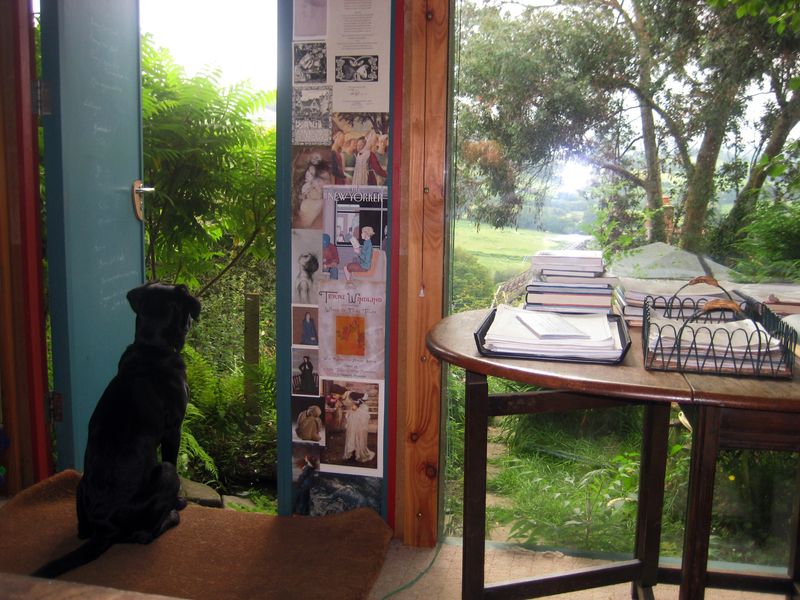 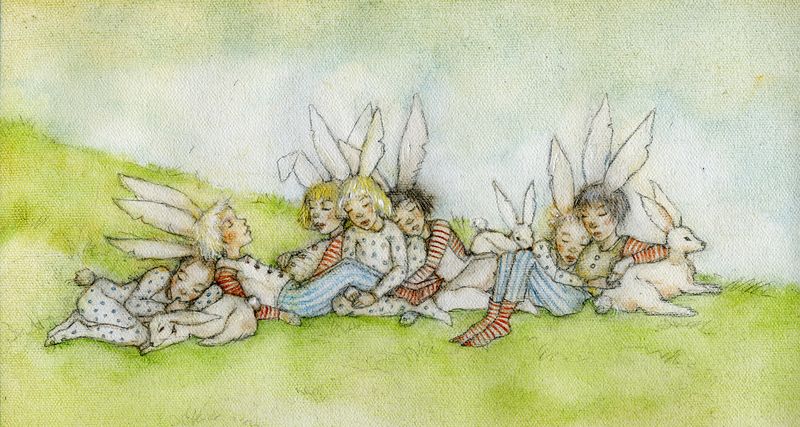 The Dog's Tales: a series of posts in which Tilly has her say....

Big drama while walking in a field close to our house this morning: I caught a young rabbit...to my own surprise, I admit. I run to love and chase but I've never before actually caught anything. My Person was alerted by the bunny's loud squeals and said, "Tilly! Drop it! Drop at once!" So I did. Honest. And no harm was done. The silly little critter had had a bad scare, but it scampered away and it seemed alright.

I, however, was marched home in disgrace, which didn't seem fair to me at all. I can't help it -- I was born on a working farm, and I come from long lines of hunting dogs. The desire to chase is bred deep in my bones. Living here in farm country, however, I've learned that I mustn't chase sheep, or cows, or bullocks on the Commons, or the wild ponies that come down from the moor.

"And not bunnies either," my Person now tells me.  "Not when you're living with a bunny-girl painter like me." All these human rules are confusing sometimes, so she's made me this helpful chart:

On daring to be foolish, once again 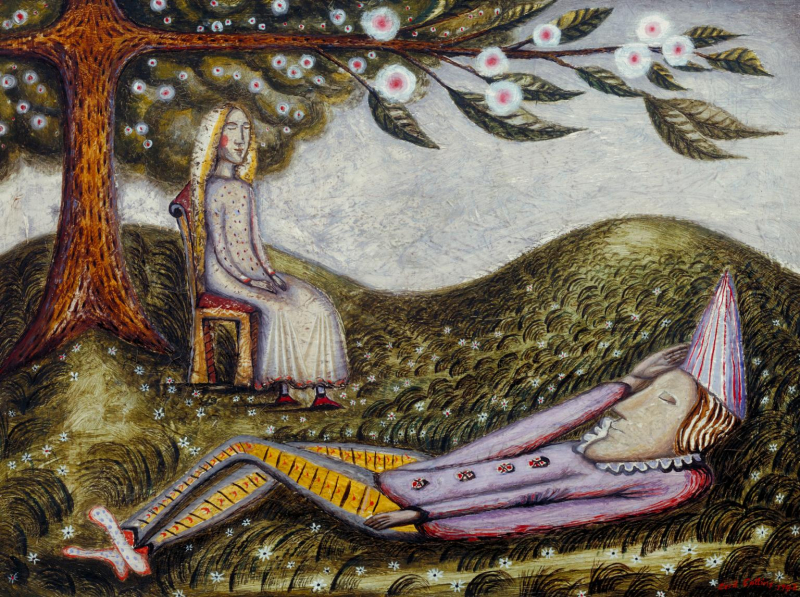 Here's a passage I love: it's Allen Ginsberg talking about the writing of poetry (although it applies to any creative endeavor), expressing some of the same things that I was trying to get at in my earlier post, Dare to be Foolish: 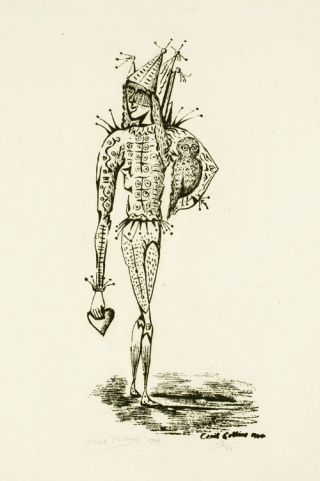 The parts of your work that embarrass you the most, says Ginberg, "are usually the most interesting poetically, are usually the most naked of all, the rawest, the goofiest, the strangest and most eccentric and, at the same time, most representative, most universal....That was something I learned from Kerouac, which was that spontaneous writing can be embarrassing....The cure for that is to write things down which you will not publish and you won't show people. To write secretly...so you can actually be free to say anything you want.

"It means abandoning being a poet, abandoning your careerism, abandoning even the idea of writing any poetry, really abandoning, giving up as hopeless -- abandoning the possibility of really expressing yourself to the nations of the world. Abandoning the idea of being a prophet with honor and dignity, and abandoning the glory of poetry and just settling down in the much of your own mind....You really have to make a resolution just to write for yourself...in the sense of not writing to impress yourself, but just writing what your self is saying."

Now this is, in a sense, the opposite advice from the Henry James quote I posted earlier this week, which seems to suggest that artists consider whether the work they're doing is worth doing before they embark upon it. Ginsberg, by contrast, advises working from the gut, the core, the raw and messy interior, without worrying too much about whether the world will value (or even needs to see) what it is we create. I tend to think that both pieces of advice are valid, and necessary to the creative process. The key, I suppose, is knowing which one to apply at what time, and for which project, and for which stage of a particular project.

When I'm writing, for example, I find that first drafts are my time for Ginsbergian flow, letting things emerge from the depth without censor (a freedom I achieve only by adhering to a strict rule of keeping my early drafts private). It's only in later drafts -- when I'm approaching my work more as an editor than an author -- that I can evaluate the text in the Jamesian way. And I've learned, over the years, not to let the Jamesian editor/critic into process too early, for then I am liable to be so self-conscious that I end up writing painfully s-l-o-w-ly...or writing nothing at all. I long ago discovered that I need to allow that first draft to be just as red, wrinkled, and bawling as a new born babe--a creature of beauty only to me, its mother--for that seems to be how my stories are born. The first draft is always and only for myself. It's the last draft that's for the readers. The art above is The Sleeping Fool, The Fool, and The Secret by the English surrealist painter and printmaker Cecil Collins (1908-1989).

in Foolery, On the creative process, On writing | Permalink | Comments (4) 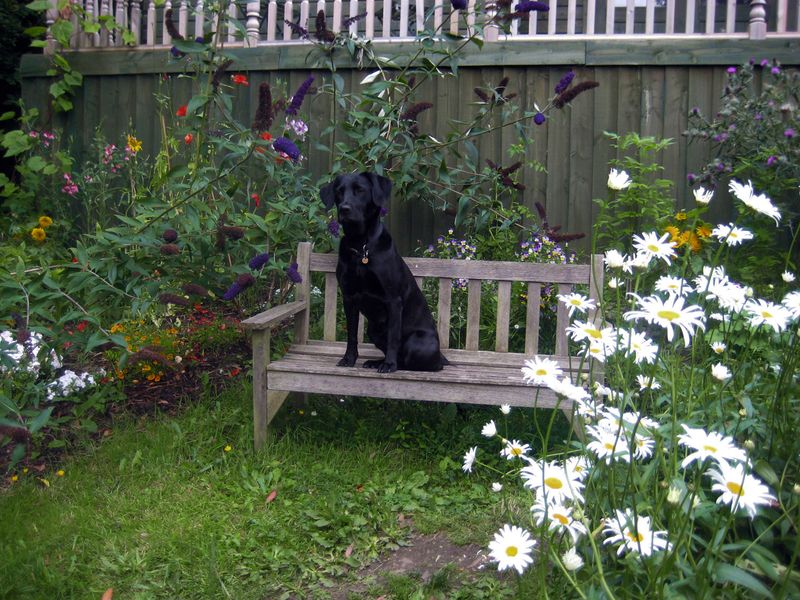 As Tilly perches among the flowers on a lazy summer afternoon, I'm reminded of what this spot looked like when we first moved into Bumblehill: a sad patch of land at the back of the yard by the border of the woods. First we built the two-room cabin that is used as Howard's office now.... 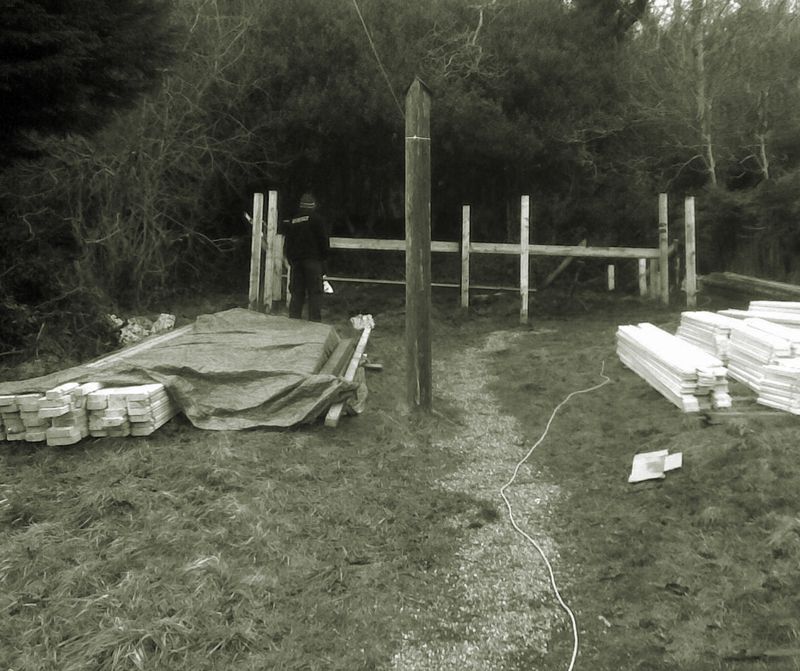 ...and then Howard put on his gardening cap and got to work on the land itself... 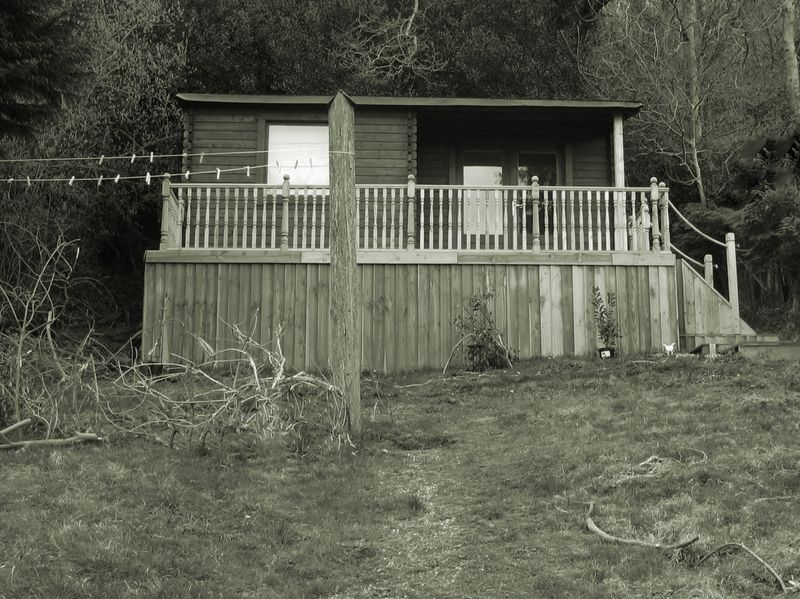 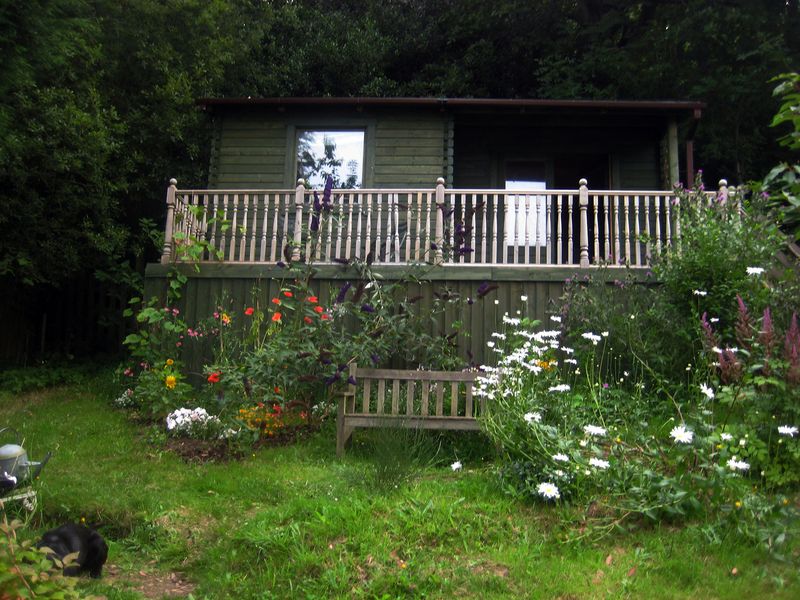 ...full of birds and bees and butterflies... 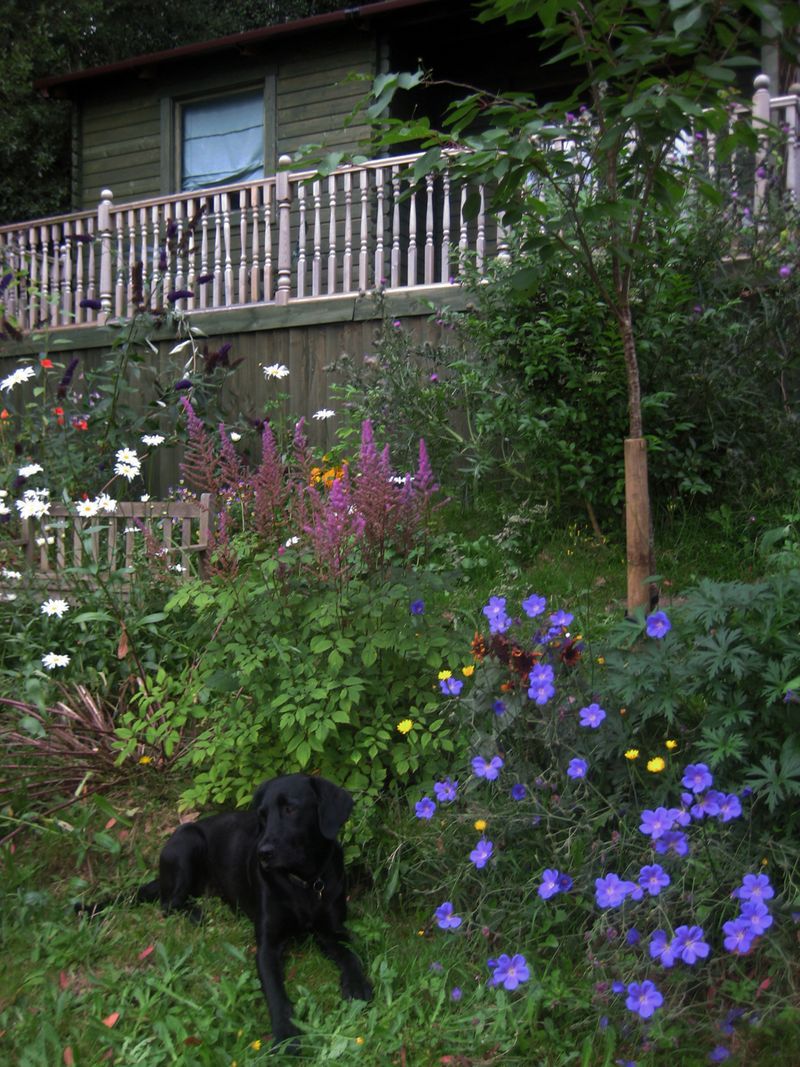 ...and one little black dog. Who believes, of course, that he did it all just for her. 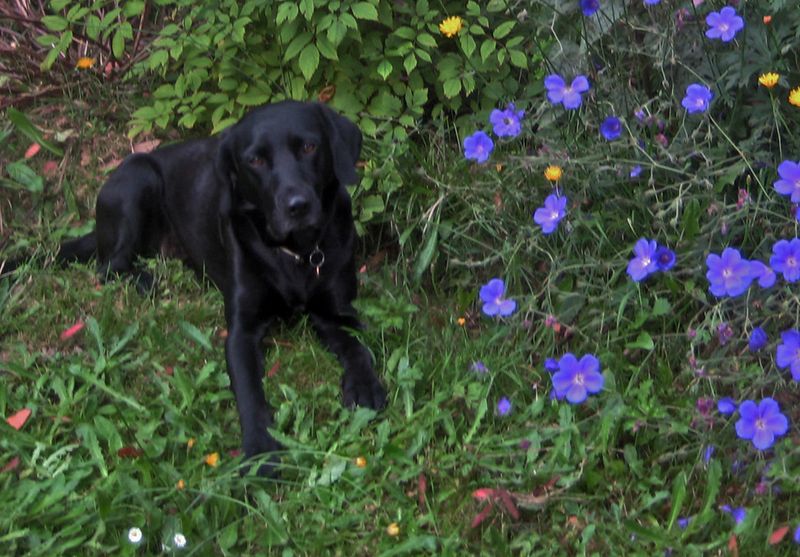