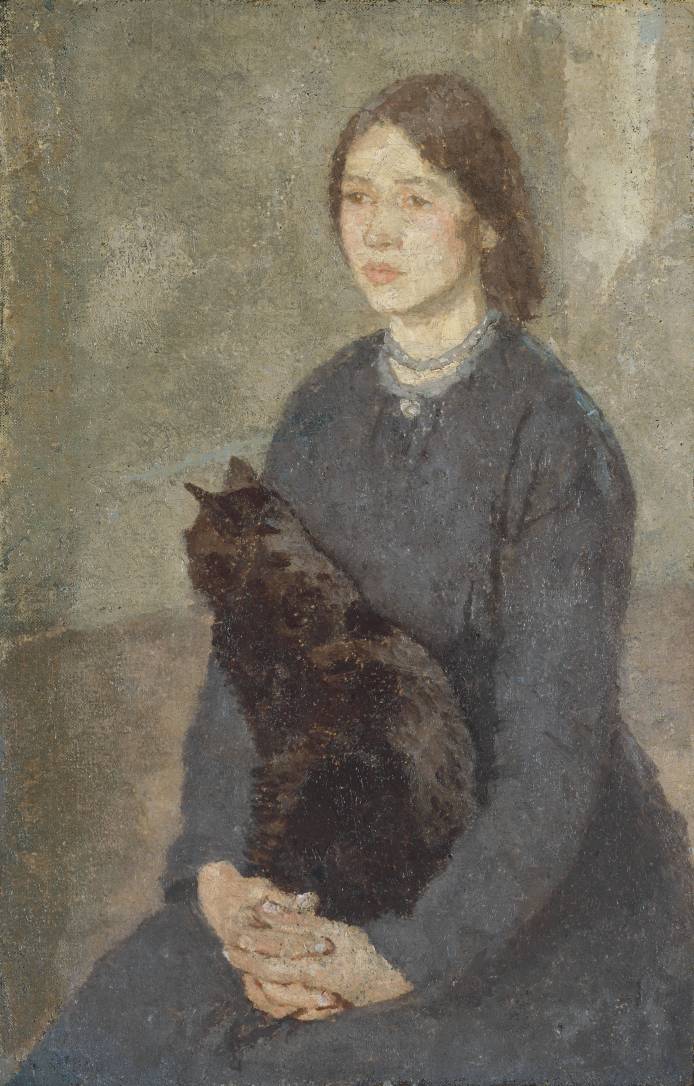 I love the Welsh artist Gwen John (1876-1939) both for her beautiful, tranquil, masterful paintings, and for her passionate, ferociously independent spirit. Her younger brother, Augustus John, grew up to be the most celebrated English artist of his day, and yet he famously stated: "Fifty years after my death I shall be remembered as Gwen John’s brother." Remarkably, time has proved him right. 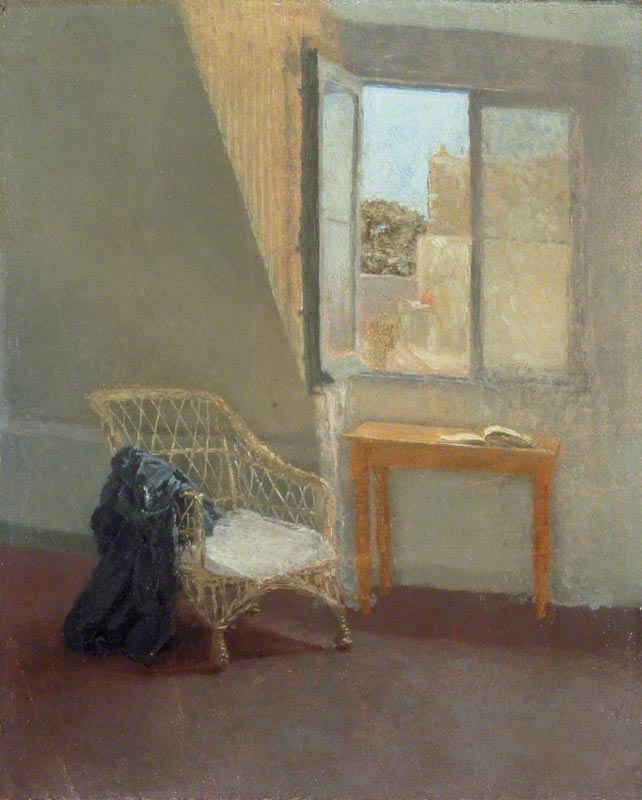 Gwen studied at the Slade School of Art in London in the waning years of the 19th century, then carved out a bohemian life at the fringes of the art world in Paris (from roughly 1898 to 1910), where she studied with 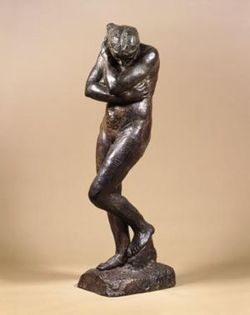 Whistler, modelled for Rodin (who was also her lover), and was a close friend of Rilke's. Living in a series of spare little rooms, she supported herself by modelling while quietly creating luminous paintings of great technical brilliance, exploring the tonal qualities of color in an almost scientific fashion. Obsessed with Rodin, and focused on her work, she exasperated her family and friends by her eccentric manner of living -- spending money on paints and treats for her cat while living on nuts and fruits herself. On hot summer nights, Gwen liked to sneak into the Luxembourg Gardens and sleep among the trees with her beloved cat, Tiger. (Almost one hundred years later, I love walking through the same gardens and imagining the young artist there.) 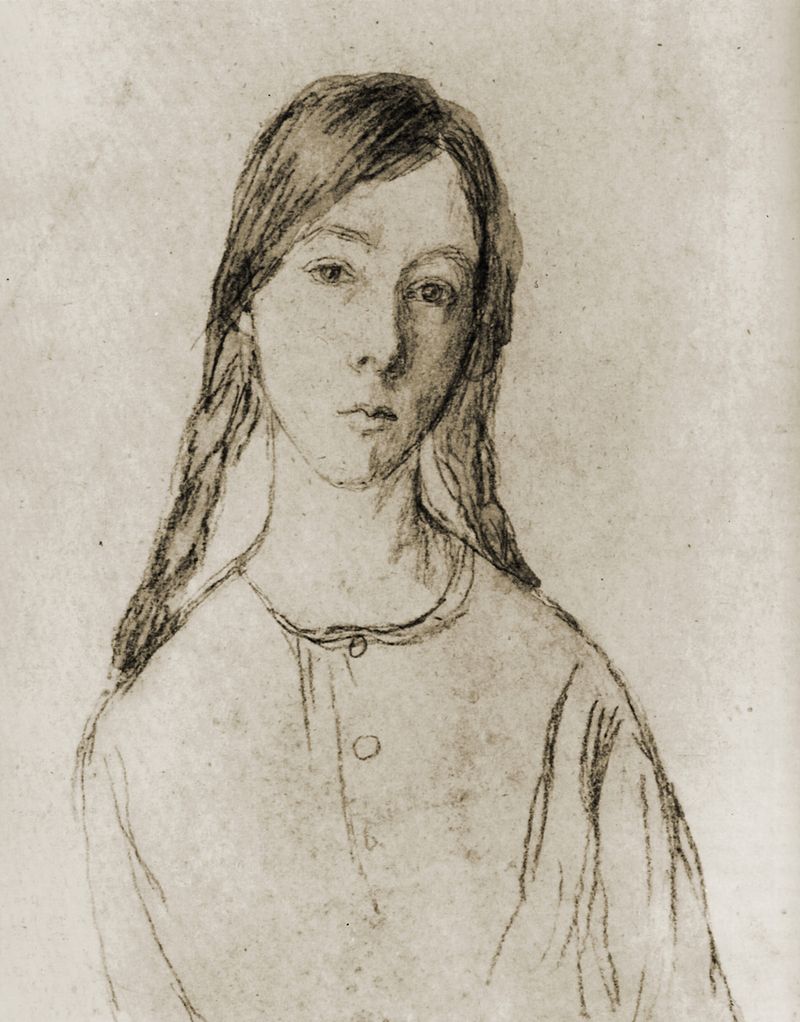 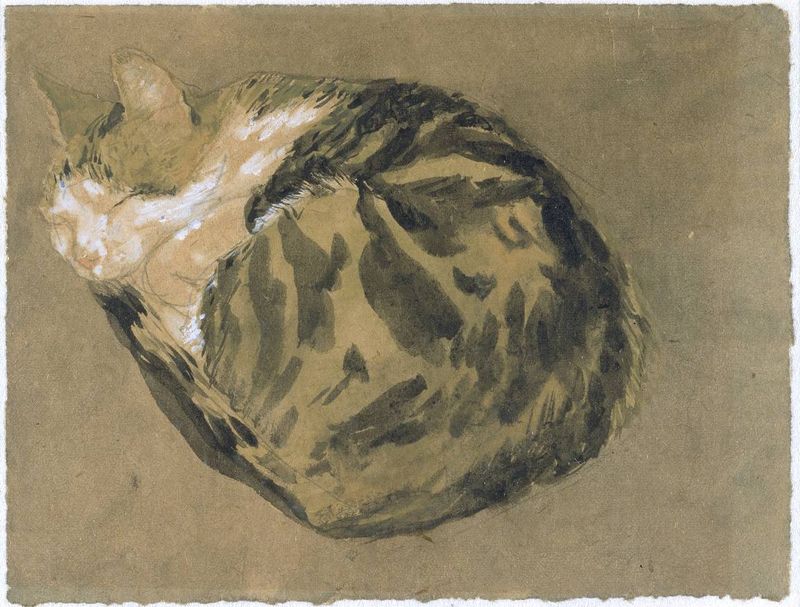 In 1910, Gwen moved to a tumbledown house on the outskirts of Paris, converted to Catholicism, and lived an increasingly reclusive life with her paints and cats, often disappearing into "retraits" in which she would see no one at all, devoting herself to her art. Her usual painting subjects were women, children, cats and corners of the various rooms she lived in -- but always Gwen's true subject was color and light, and the interplay between them. 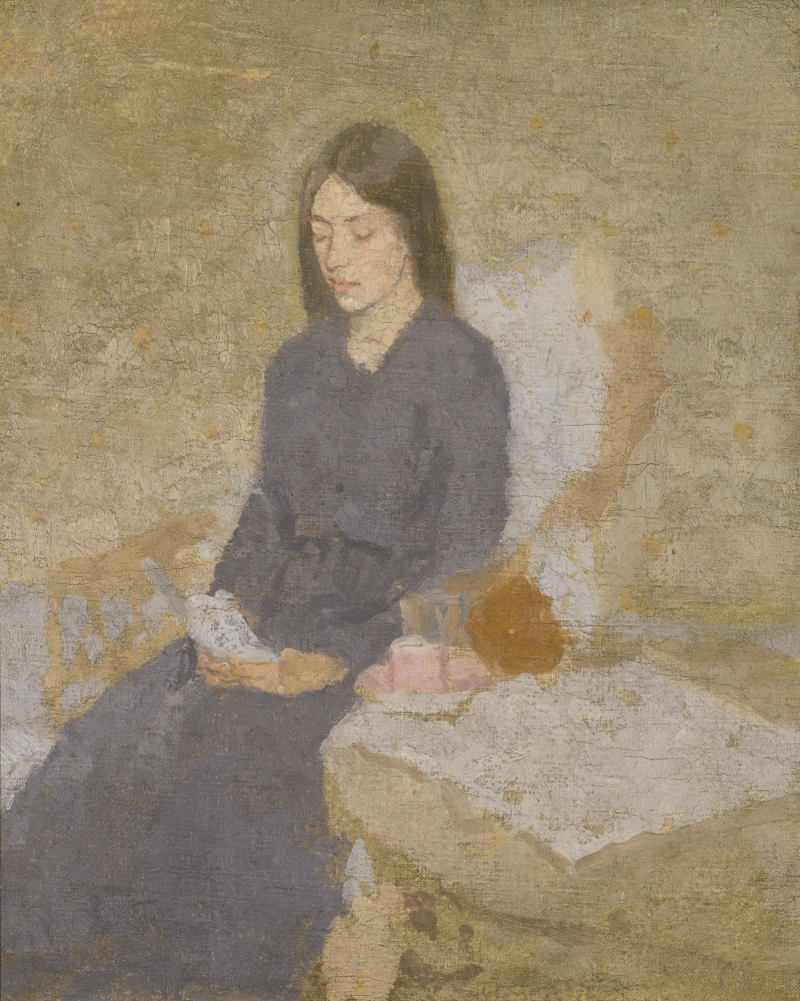 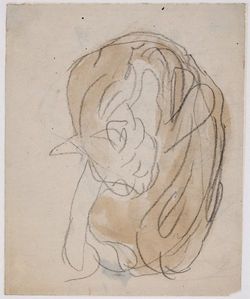 "She painted. She had a little success. She died. I should hate her story but it seems to me exemplary.  She made exactly enough space in her life to set her easel down. The push for honesty in her work is amazing; the way she painted the light hitting the side of a brown teapot, or the slope of a mansard roof. I look at her sad, frank-eyed portraits of herself and of other women, and think if that is what the truth looks like, then she was painting a losing game.

"But she did not compromise. She worked with her elbows stuck out, jabbing them both in the eye: on one side her brother Augustus, with his lifestyle and his fame and his sentimental line, and on the other, Auguste [Rodin], the genius, his lecherous old hands coaxing flesh from stone.

"She stood in the middle, looking straight at her subject: Gwen." 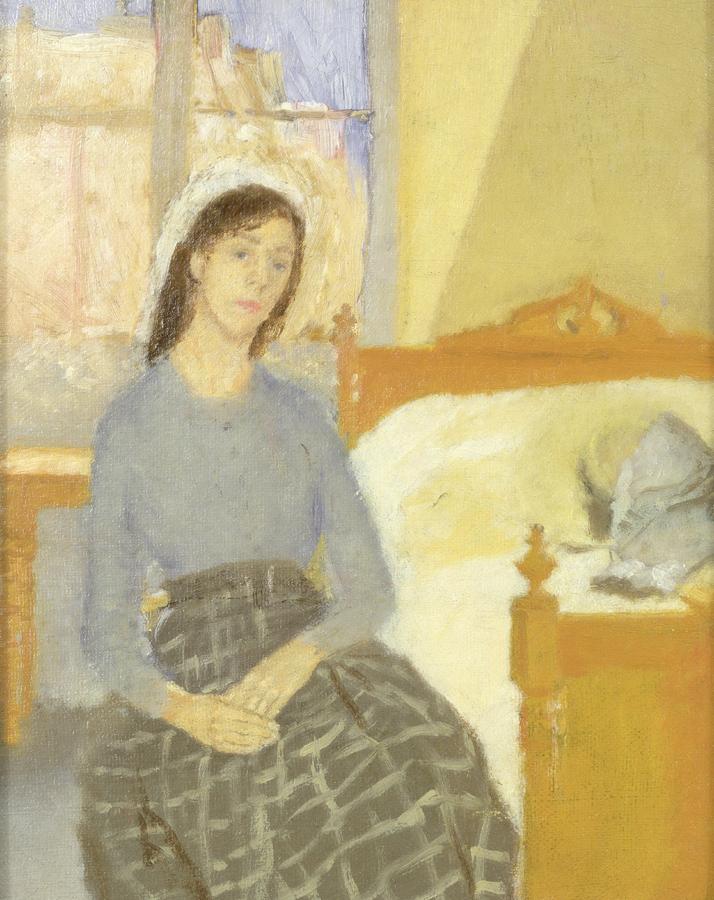 I recommend reading Enright's short article ("My hero: Gwen John"), and having a look at Gwen's paintings in the Tate Britain collection. There are two excellent biographies of the artist: Gwen John, A Life by Sue Roe, and  Gwen John by Susan Chitty. I also recommend  Gwen John and Augustus John from the Tate's exhibition of the two artists' work in 2004/2005. And, for something a little different, The Blue Flower: Poems from the Life and Art of Gwen John by English poet Elizabeth Burns. 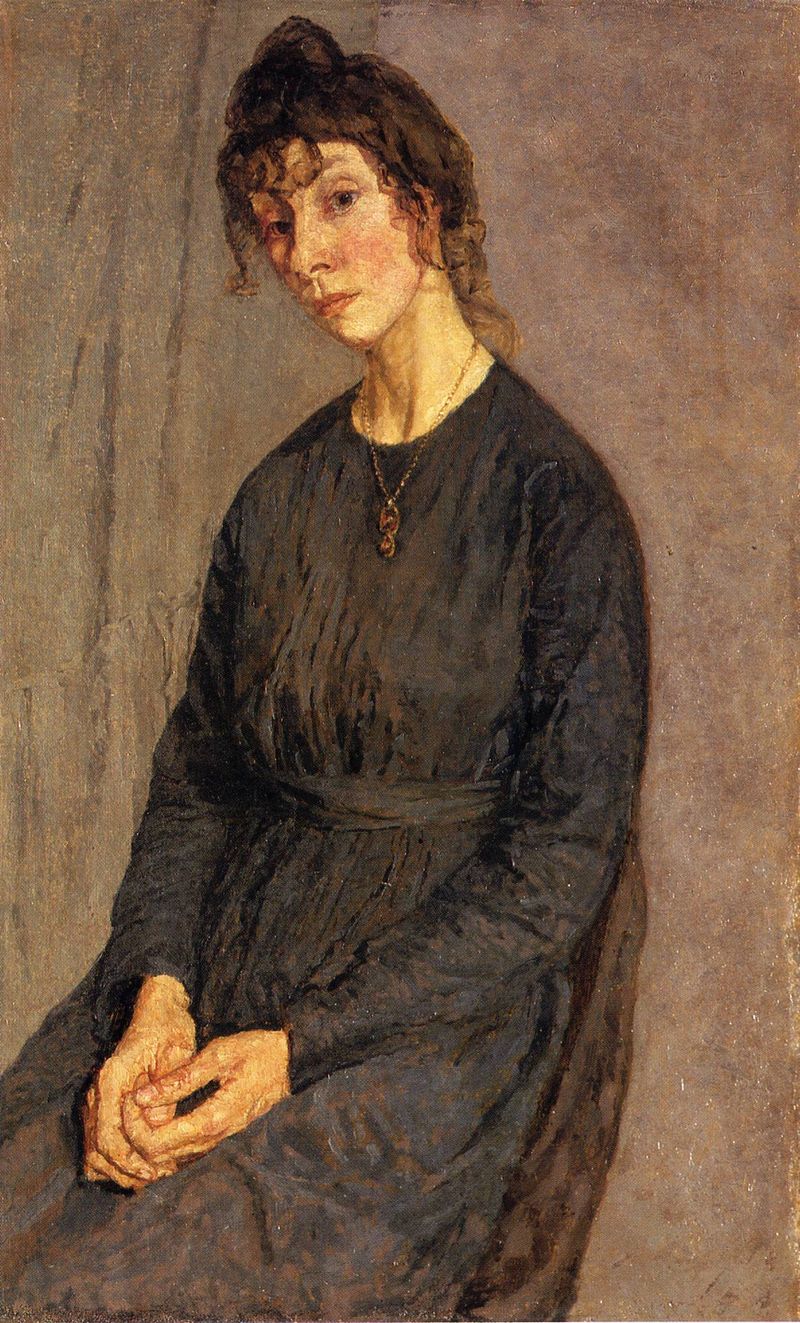 The painting  at the top of this post is one of Gwen's best known, "Young Woman Holding a Black Cat," followed by "A Corner of the Artist's Room." (This refers to an attic room at 87 rue du Cherche-Midi in Paris, where the painter lived between 1907 and 1909.) The following paintings and sketches are:  "Self-portrait sketch," " The Cat,"  "The Convalescent," "Cat sketch," "The Artist in Her Room in Paris,"  and "Portrait of Chloe Boughton-Leigh" (a friend of Gwen's in Paris). The sculpture is "Eve" by Auguste Rodin, one of the pieces Gwen modelled for.

Ah, i'm off to Paris in a couple of weeks for a spot of drawing and the Edvard Munch exhibition, now i've got another artists to read up on before I go too...not sure i'm going to attempt sleeping out of doors at this time of year though! Lovely paintings, happy way to start the morning thankyou :)

This is so interesting. I love the first painting, it seems to tell such a story. And I love the second, it is beautiful and eloquent. Both seem to have a slight sadness to them that I also read in the artist's story, although I could be wrong.

Hi Terri, thanks for posting about Gwen John, "Keeping the World Away" by Margaret Forster is an interesting novel based on the painting at the top of your post "A Corner of the Artist's Room" and being an artist and being a woman, I discovered it here-
http://www.yorkshiresfavourites.org/paintings/a-corner-of-the-artist-039-s-room-in-paris.html

In some ways it was a sad life, hemmed in by the many restrictions placed upon women of her time and class (for all that she kicked constantly against those restrictions) -- but the portrait many people have of Gwen, as a loner and recluse, was true only of her later years. In her youth in London and Paris she had many friends, adventures, love affairs, and great camaraderie with other young women artists. There were aspects of her life that would give us pause today (her unhealthily obsessive relationship with Rodin, for starters), but for her time I think she was amazingly courageous, and absolutely dedicated to her art. (And her cats!)

Thanks for the book recommendation (I'll check it out) and the link. It's interesting to learn that the painting was presented to the museum by Dorelia John, who played a fascinating role in Gwen's life as well as her brother's. Michael Holroyd wrote an absolutely riveting biography of Augustus John (and the extended John circle) which I highly recommend -- especially the later revised edition, published after new family papers came to light.

Great post Terri about one of my favourite painters. I think Gwen is far and away a better painter than her brother (I prefer his drawings to his paintings). And it seems to me that her life was lived much like her painting style - gentle and focusing on small corners and solitude. I suppose we can't help but live our lives in the style of our art if it is so much a part of us.
I saw The Convalescent in Cambridge a while ago - and it was wonderful to appreciate it in the flesh.
There's a soft quality to many painters' work which you and I both are drawn to - the work of Jeanie Tomanek and Catherine Hyde also have this evocative softness. I wonder what it calls to in us? For me particularly - it is quite different from my own work where the edges are finely picked out.

Beautiful work, I especially love the first painting. I'm thinking about Rima's comment, and I'm the same...the work of other artists that calls to me most is often work that is, as Rima says, soft, without sharply defined edges, and very different to my own. If I was painting a scene like the first one, it would be all clearly defined edges, and scrupulously straight lines for the window and table. For me it is the capture of light that entrances me, the way an artist can place a few blobs of light and dark paint and magically a face, or chair, or window is conjured, half shadowed and half in the sun and so real and yet so obviously created with paint. I love it so much because it's something I can't do myself, so it really does seem a kind of magic. Gwen's work is that kind.

I love her work and your post.She was a very strange woman in many ways. I have read biographies of her and Augustus and it was interesting comparing them.

Ha, i've just been looking through a few of Gwen John's paintings online and realised that i've had a postcard of one of her paintings up on my wall for years! Definitely going to do a little more reading about her now!

Terri, do you happen to know the German painter Paula Modersohn-Becker? (http://en.wikipedia.org/wiki/Paula_Modersohn-Becker) I wonder whether she ever met Gwen John, because they happened to be in Paris at around the same time, and they both knew Rilke. Paula M.-B.'s story is very interesting indeed; I have just read a wonderful biography about her, which sheds much light on her struggle between what society prescribed as a woman's lifestyle and her own individual choices.

Both Gwen John and Paula Modersohn-Becker seem to have painted sujets which, at their time, were largely neglected: women, children, self-portrait, still life, interieurs.

Gosh, I really wonder whether they have met. I hope they did. And now I want to read more about Gwen John - thank you for pointing her out to us!