Crossing over
Holding the World in Balance 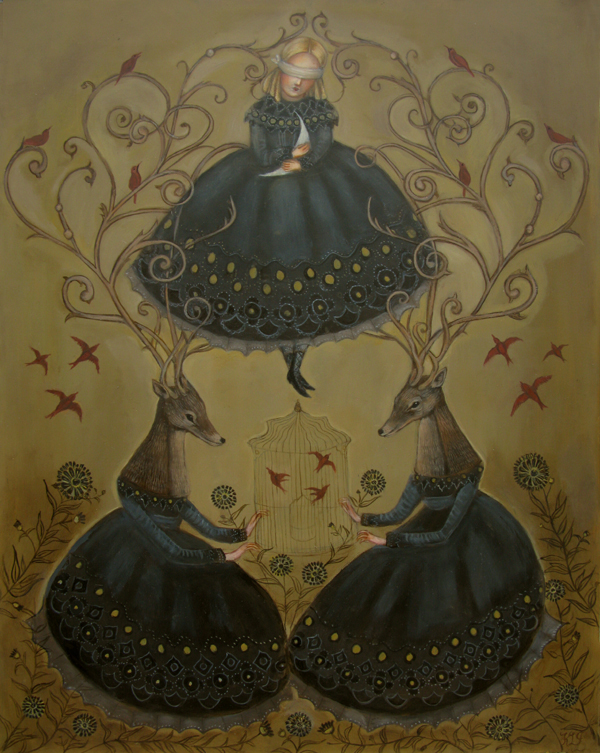 From the Introduction to The Beastly Bride: Tales of the Animal People, a YA anthology I edited with Ellen Datlow:

"Contemporary writers use animal-transformation themes to explore issues of gender, sexuality, race, culture, and the process of transformation...just as storytellers have done, all over the world, for many centuries past. One distinct change marks modern retellings, however, reflecting our changed relationship to animals and nature. In a society in which most of us will never encounter true danger in the woods, the big white bear who comes knocking at the door [in fairy tales] is not such a frightening prospective husband now; instead, he's exotic, almost appealing. 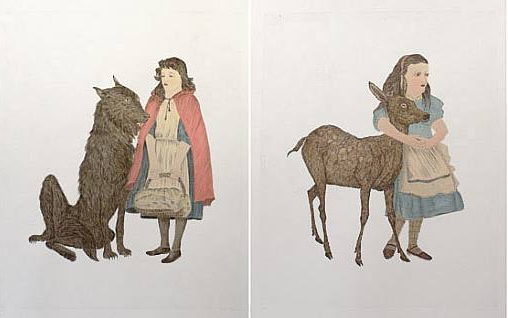 "Whereas once wilderness was threatening to civilization, now it's been tamed and cultivated; the dangers of the animal world have a nostalgic quality, removed as they are from our daily existence. This removal gives "the wild" a different kind of power; it's something we long for rather than fear. The shape-shifter, the were-creature, the stag-headed god from the heart of the woods--they come from a place we'd almost forgotten: the untracked forests of the past; the primeval forests of the mythic imagination; the forests of our childhood fantasies: untouched, unspoiled, limitless. 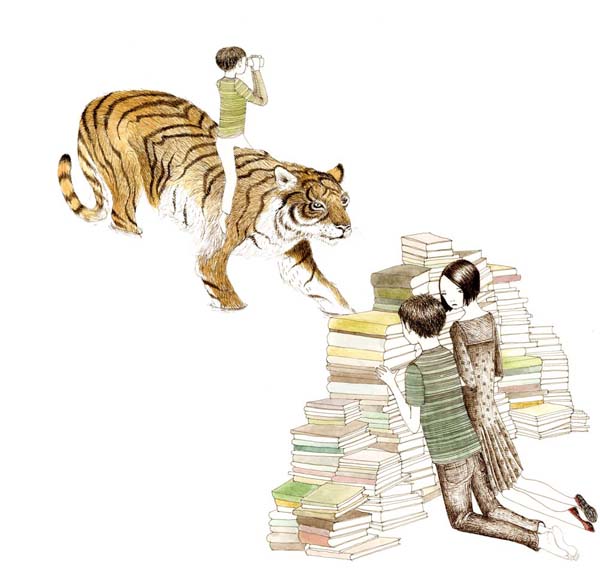 "Likewise, tales of Animal Brides and Bridegrooms are steeped in an ancient magic and yet powerfully relevant to our lives today. They remind us of the wild within us...and also within our lovers and spouses, the part of them we can never quite know. They represent the Others who live beside us--cat and mouse and coyote and owl--and the Others who live only in the dreams and nightmares of our imaginations. For thousands of years, their tales have emerged from the place where we draw the boundary lines between animals and human beings, the natural world and civilization, women and men, magic and illustion, fiction and the lives we live." 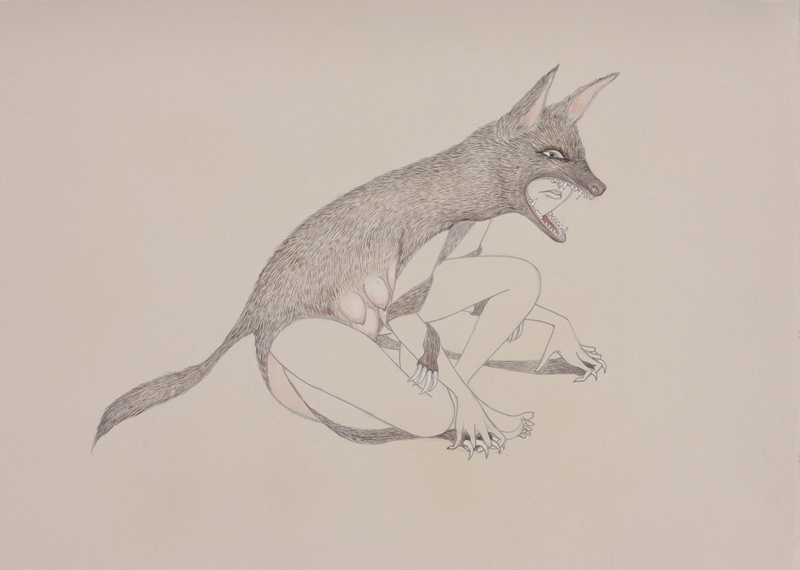 Images above: "Perched" by Kelly Louise Judd (Kansas City), two prints by Kiki Smith (New York), "Book and Tiger" by Julie Morstad (Vancouver), and "Bitch" by Kay Fu (Brooklyn). Please follow the links to see more of their work. Further reading: "Into the Woods: On British Forests, Myth and Now" by Ruth Padel.

My dress is as white as my hopes, my fear,
I dare not look into the mirror.
The wedding contract has been signed.
Father left me soon after delivery,
afraid of the outcome, taking with him
a single rose from the garden.
We are cocooned in the silence of the house,
Beast in his room, I in mine.
Invisible, the servants await the consummation.
Now a single sound shatters the still,
the padding of paws on the parquet floor.
I drop my bouquet onto the bed,
red petals against the linen.
He comes, mane combed, fangs gleaming.
I step into my hide, my claws, my seeming.

I came to say the pictures were lovely, and I found poetry in the combox, and now I am utterly enspelled by all the beauty.

ditto I say in a lazy way..but seriously, this post is just so fine. i've been thinking a good deal lately about how we romanticize our relationship with animals. How the hard facts of animal existence actually connect us in primal ways despite our veneer of civil discourse. Fantasy lends itself to explicating that likeness in the most extraordinary ways, of making it nonthreatening while still telling raw truths (like those grim Grimms did).

I have shivers...beautiful all around. I have to say this again since Terri has a review up on The Tiger's Wife by Tea Obreht. I lost a goodly amount of sleep finishing the book from front to back one night. I await another from her greedily. Oh that tiger....shiver.

Jane, I hope your gorgeous poems that you've been sharing will be collected into a published volume someday. If they were illustrated by Terri, what a magical book it would be.

I am fascinated by the reading and comments about shape-shifting,animals and Nature.The people of my community in the Black Hills,do not view Nature as 'other' and our life with the four-leggeds, winged ones and fish is still sacred. The white Europeon analysis and relegation of shape-shifting to mere mythology is always entertaining.

Thanks, not sure they will be all in one volume anywhere, but am working on a book of poems about being a writer and if it sells anywhere, those particular poems will be in it. Am also doing a series of broadsides, limited editions, to be announced on FB and elsewhere. But that's a way off.

Ah, but Europe has it's own rich history of shape-shifting tales and ceremonies, and in the diverse European indigenous traditions myths are not "untruths" but sacred teaching stories. What I find interesting, and heartening, is the commonality of such stories around the world.

Thanks for your kind words about my art.

Did you see the terrific little autobiographical piece she did for The New Yorker a while back?

Oh Terri thank you for the link...that just melts my heart as I too wore coke bottle glasses from 3rd grade on...now i like her even more.

Your art and writing has always been very special to me. I've read The Woodwife many times. When asked about a favorite book, it is always my first answer.
My grandfather was known to be a shape-shifter. He would appear as a buffalo, wolf or mountain lion. Not in costume, but as the animal. They still talk of his appearances. The tradition still continues,not just in myth and story but as a living truth. However, There are very few who live in such a way as can accomplish the shift in consciousness anymore. Mitakuye Oyasin

I'm sure it will sell. Loved "Take Joy". Poems about being a writer would be fantastic.

I'll buy that book, especially with the poems. I looked at your blog and love the wisdom,
both practical (rejection and beyond) and your inspiring dedication to fairy tales and the
magical.

In northern Europe, too, the tradition continues (among the Sami, for example), and in Siberia...among pockets of people still living in the old ways, though this, sadly, grows fewer and fewer. And when I lived in Tucson, a Yoeme friend talked about this in his family as a living, not a mythic, tradition. Your grandfather sounds like a remarkable man. I really appreciate your words about The Wood Wife; they warmed my heart on a cold, rainy Devon morning. Mitakuye Oyasin.

Ferocious moon teeth bared
Lips pulled back
All cloud gums and ivory
Sun frosted
I cower before you
Offer my heart to you
Beating blue
Beating for you
I feel it.
Feel rhythm
Moon rhythm
Moon beating for me
Moon beaming for me
And it begins to rise.
From the jowls of my kidneys
Curling up my spine
Til I am dancing
Your dance
Moon rabbit
Velvet ears of comfrey
I dance you
With wide ecstatic eyes

i wrote this ages ago...your post reminded me of it. power of shifting. xxxx

Your books feed me.

That's one of the nicest compliments I've ever gotten. Thank you.