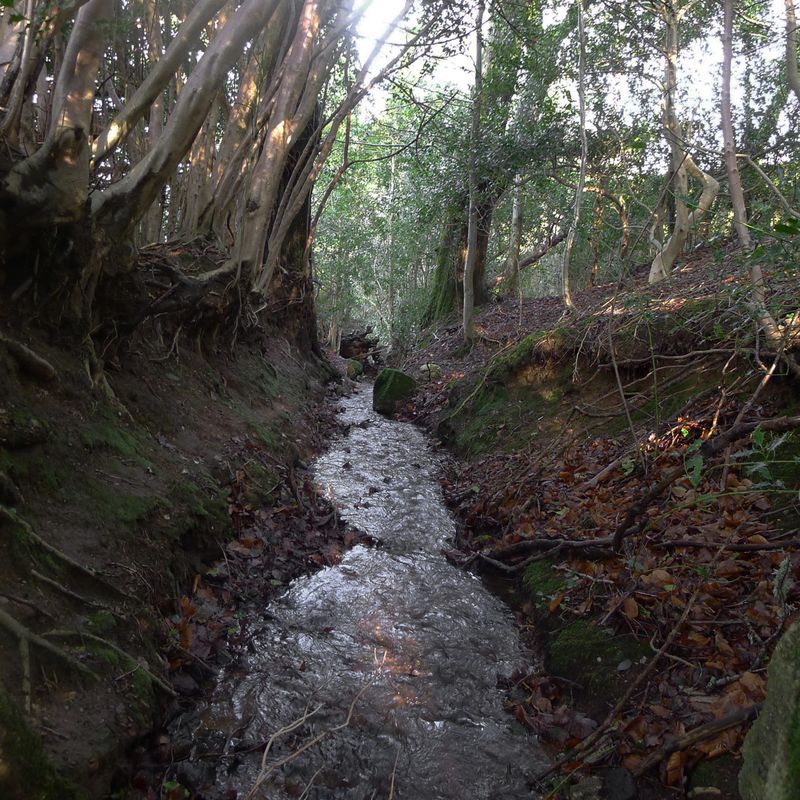 “Every work of art is one half of a secret handshake, a challenge that seeks the password, a heliograph flashed from a tower window, an act of hopeless optimism in the service of bottomless longing. Every great record or novel or comic book convenes the first meeting of a fan club whose membership stands forever at one but which maintains chapters in every city -- in every cranium -- in the world. Art, like fandom, asserts the possibility of fellowship in a world built entirely from the materials of solitude. The novelist, the cartoonist, the songwriter, knows the gesture is doomed from the beginning but makes it anyway, flashes his or her bit of mirror, not on the chance that the signal will be seen or understood but as if such a chance existed.” ― Michael Chabon 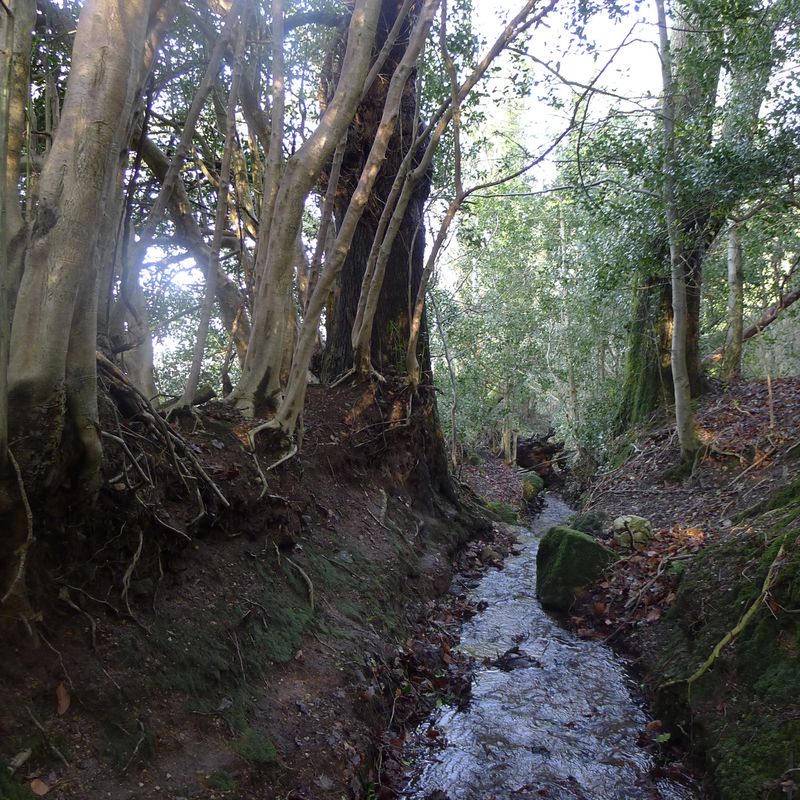 “A book is more than a verbal structure or series of verbal structures; it is the dialogue it establishes with its reader and the intonation it imposes upon his voice and the changing and durable images it leaves in his memory. A book is not an isolated being: it is a relationship, an axis of innumerable relationships.” ― Jorge Luis Borges 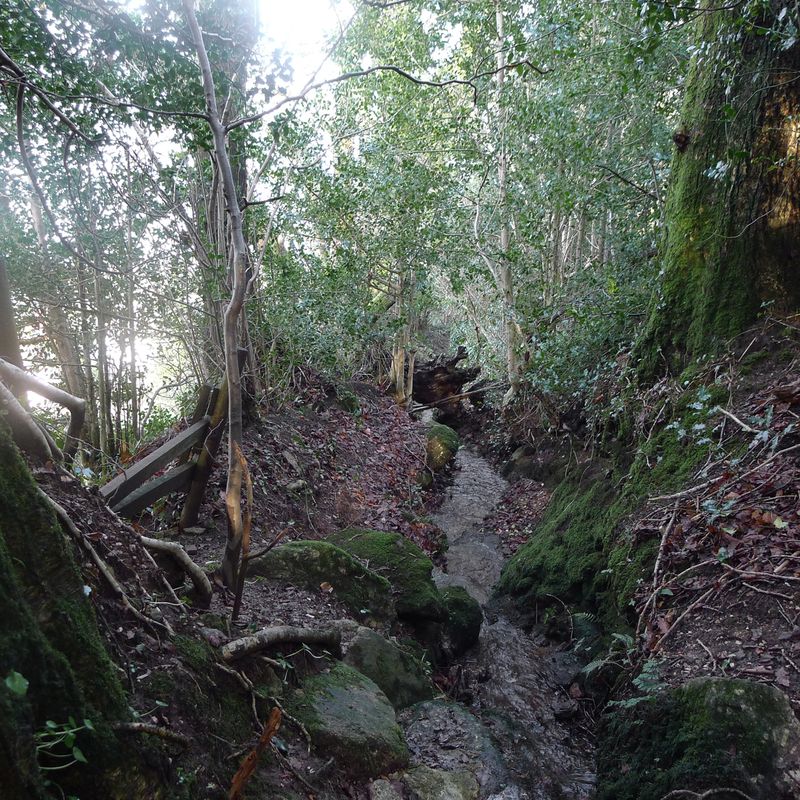 “I think every work of art is an act of faith, or we wouldn't bother to do it. It is a message in a bottle, a shout in the dark. It's saying, 'I'm here and I believe that you are somewhere and that you will answer if necessary across time, not necessarily in my lifetime.' ” - Jeanette Winterson 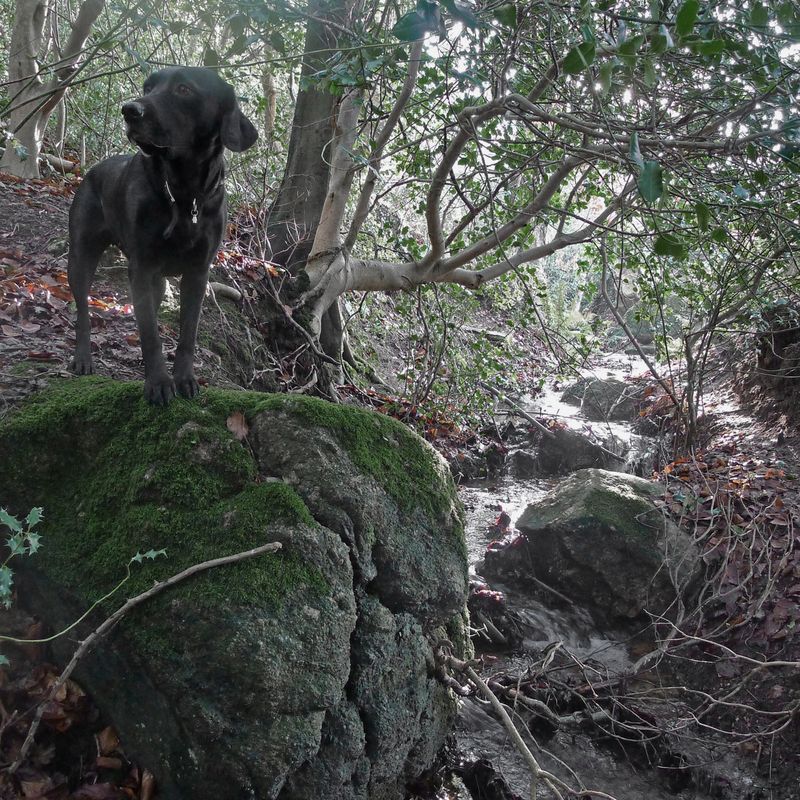 "Art is an effort to create, beside the real world, a more human world." - André Maurois 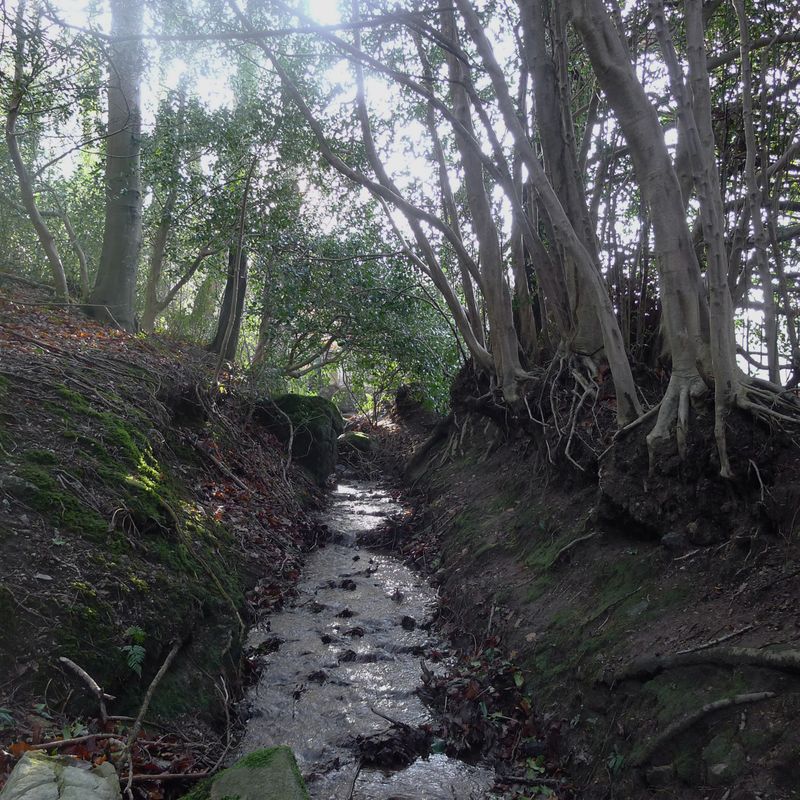 Images above: The stream that runs behind my studio, photographed yesterday. Holly, ivy, and moss keep the woodland green throughout the winter months. Last week's snow has vanished completely.

Shaping stories, and being shaped by them in turn 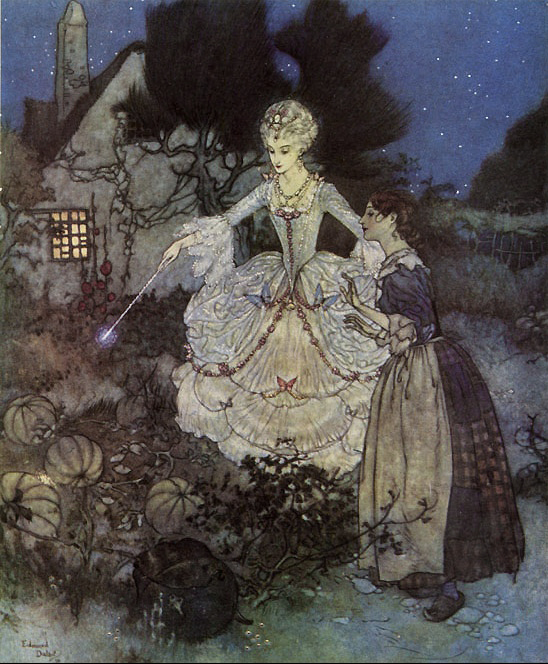 “The store of fairy tales, that blue chamber where stories lie waiting to be rediscovered, holds out the promise of just those creative enchantments, not only for its own characters caught in its own plotlines; it offers magical metamorphoses to the one who opens the door, who passes on what was found there, and to those who hear what the storyteller brings. The faculty of wonder, like curiosity can make things happen; it is time for wishful thinking to have its due.” - Marina Warner (from The Beast to the Blonde: On Fairy Tales and Their Tellers)

“Someone needs to tell those tales. When the battles are fought and won and lost, when the pirates find their treasures and the dragons eat their foes for breakfast with a nice cup of Lapsang souchong, someone needs to tell their bits of overlapping narrative. There's magic in that. It's in the listener, and for each and every ear it will be different, and it will affect them in ways they can never predict. From the mundane to the profound. You may tell a tale that takes up residence in someone's soul, becomes their blood and self and purpose. That tale will move them and drive them and who knows what they might do because of it, because of your words. That is your role, your gift. Your sister may be able to see the future, but you yourself can shape it, boy. Do not forget that... there are many kinds of magic, after all.”  - Erin Morgenstern (from The Night Circus) 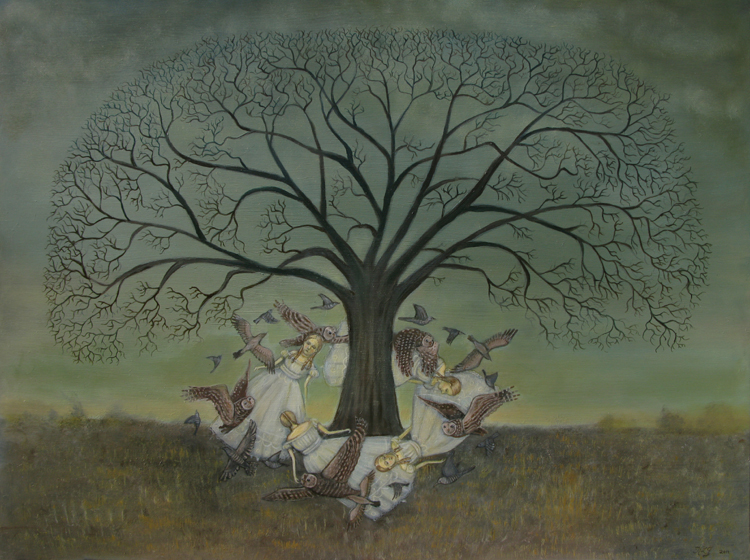 “We who make stories know that we tell lies for a living. But they are good lies that say true things, and we owe it to our readers to build them as best we can. Because somewhere out there is someone who needs that story. Someone who will grow up with a different landscape, who without that story will be a different person. And who with that story may have hope, or wisdom, or kindness, or comfort. And that is why we write.” - Neil Gaiman (from The Graveyard Book)

“People think that stories are shaped by people. In fact, it's the other way around.”  - Terry Pratchett (from Witches Abroad) 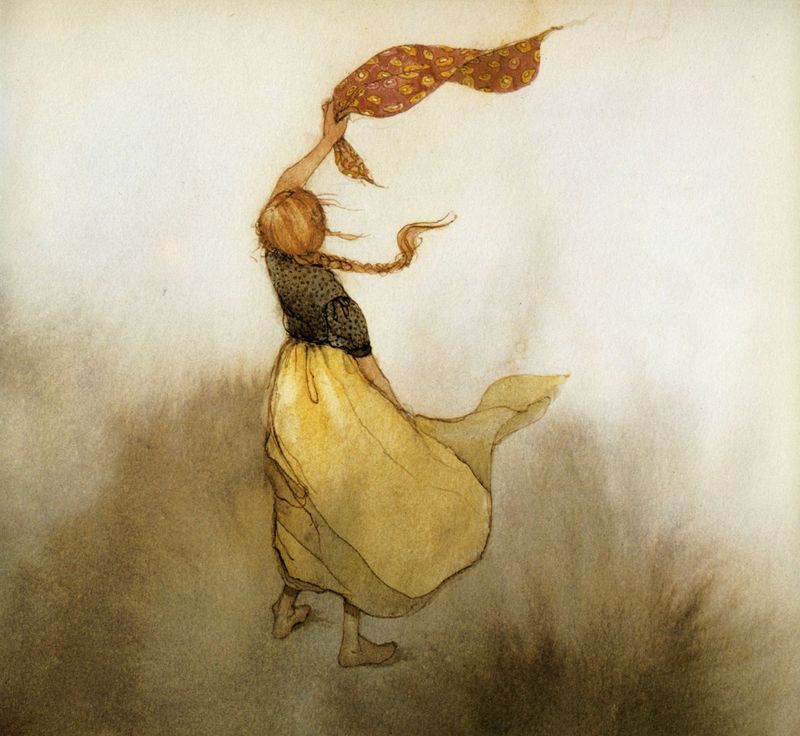 Art above: "Cinderella" by Edmund Dulac (1882-1953), "Snow White" by Angela Barrett, "Round the Oak Tree" by Kelly Louise Judd, and "Thumbelina" by Lisbeth Zwerger. 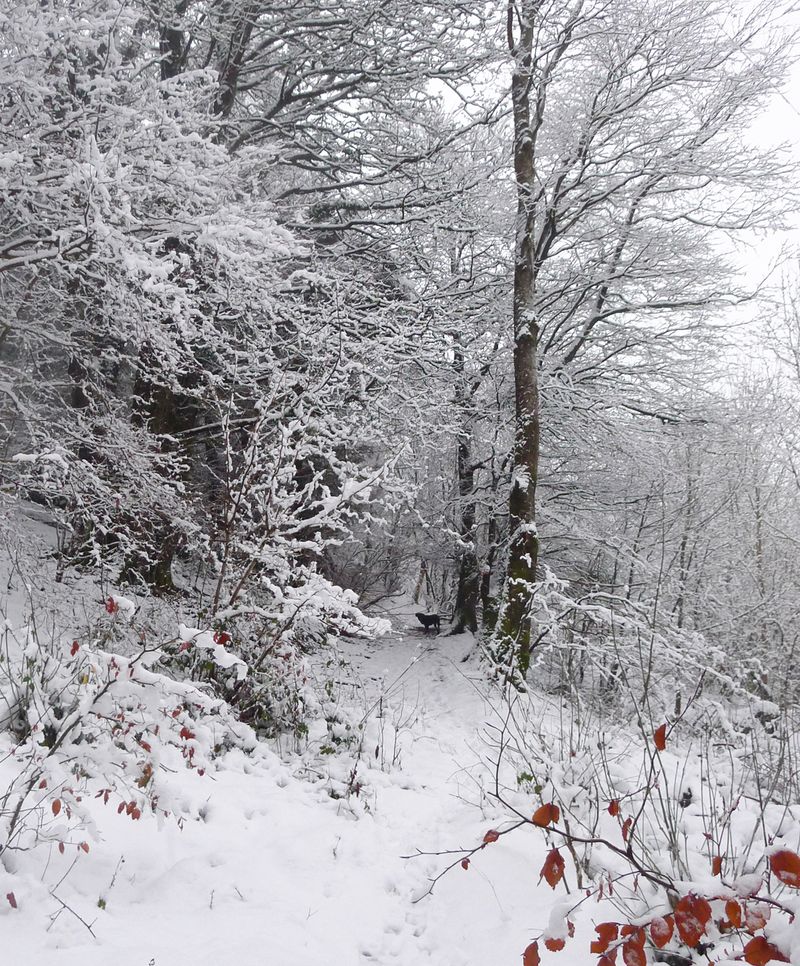 A few last snow pictures for you, for in fact the snow is already gone -- it  vanished as suddenly as it came. We went to sleep one night to icy white slopes and woke to find green grass hills again, snowmelt flooding the rivers and streams. Not a patch of snow or ice was left. Things can change so quickly.

This time last year, I was traveling through a deep, dark forest that seemed to have no end; now the road winds in new directions and I'm grateful for all that's changed since then: for the ways that bodies and psyches heal; for creative hands and resilient spirits; for the blessings of family, community, and the quiet miracle of daily living.

Today's quotes go out to any of you who are walking through your own dark woods right now. May there be trees to befriend you, and foxes to guide you, and stories to light the way.

"Stories are medicine. I have been taken with stories since I heard my first. They have such power; they do not require that we do, be, act, anything — we need only listen." 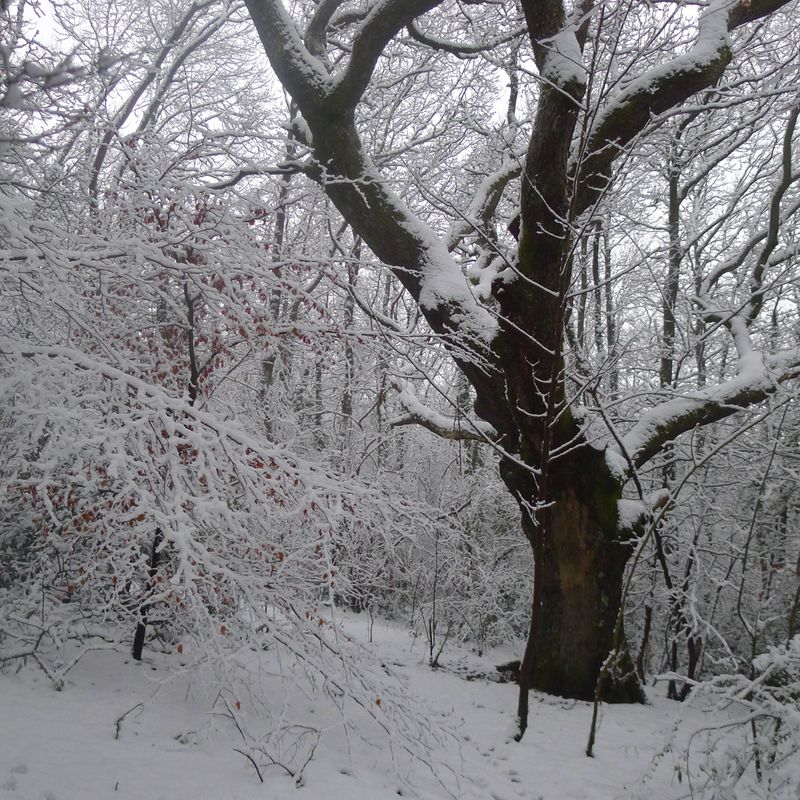 "I had lines inside me, a string of guiding lights. I had language. Fiction and poetry are doses, medicines. What they heal is the rupture reality makes on the imagination. I had been damaged, and a very important part of me had been destroyed -- that was my reality, the facts of my life. But on the other side of the facts was who I could be, how I could feel. And as long as I had words for that, images for that, stories for that, then I wasn't lost." 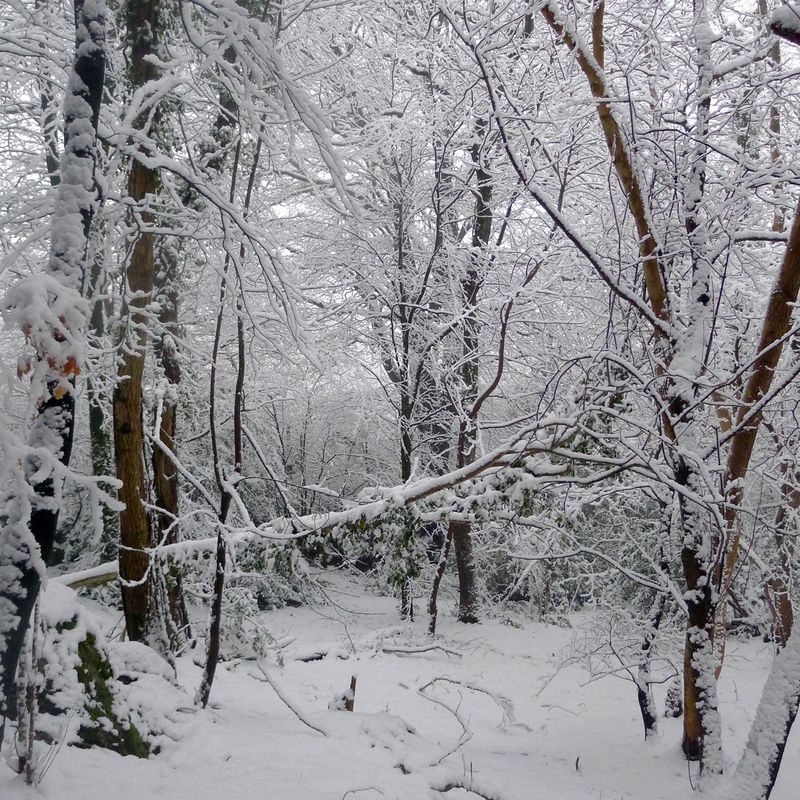 "There are certain children who are told they are too sensitive, and there are certain adults who believe sensitivity is a problem that can be fixed in the way that crooked teeth can be fixed and made straight. And when these two come together you get a fairytale, a kind of story with hopelessness in it. I believe there is something in these old stories that does what singing does to words. They have transformational capabilities, in the way melody can transform mood. They can't transform your actual situation, but they can transform your experience of it. We don't create a fantasy world to escape reality, we create it to be able to stay. I believe we have always done this, used images to stand and understand what otherwise would be intolerable." 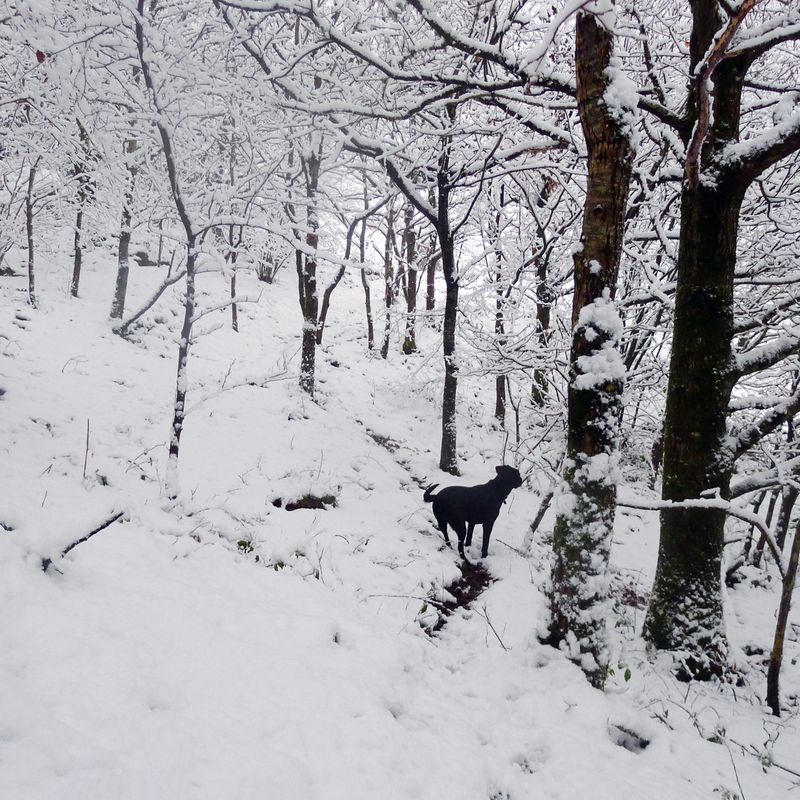 “When you enter the woods of a fairy tale and it is night, the trees tower on either side of the path. They loom large because everything in the world of fairy tales is blown out of proportion. If the owl shouts, the otherwise deathly silence magnifies its call. The tasks you are given to do (by the witch, by the stepmother, by the wise old woman) are insurmountable - pull a single hair from the crescent moon bear's throat; separate a bowl's worth of poppy seeds from a pile of dirt. The forest seems endless. But when you do reach the daylight, triumphantly carrying the particular hair or having outwitted the wolf; when the owl is once again a shy bird and the trees only a lush canopy filtering the sun, the world is forever changed for your having seen it otherwise. From now on, when you come upon darkness, you'll know it has dimension. You'll know how closely poppy seeds and dirt resemble each other. The forest will be just another story that has absorbed you, taken you through its paces, and cast you out again to your home with its rattling windows...." 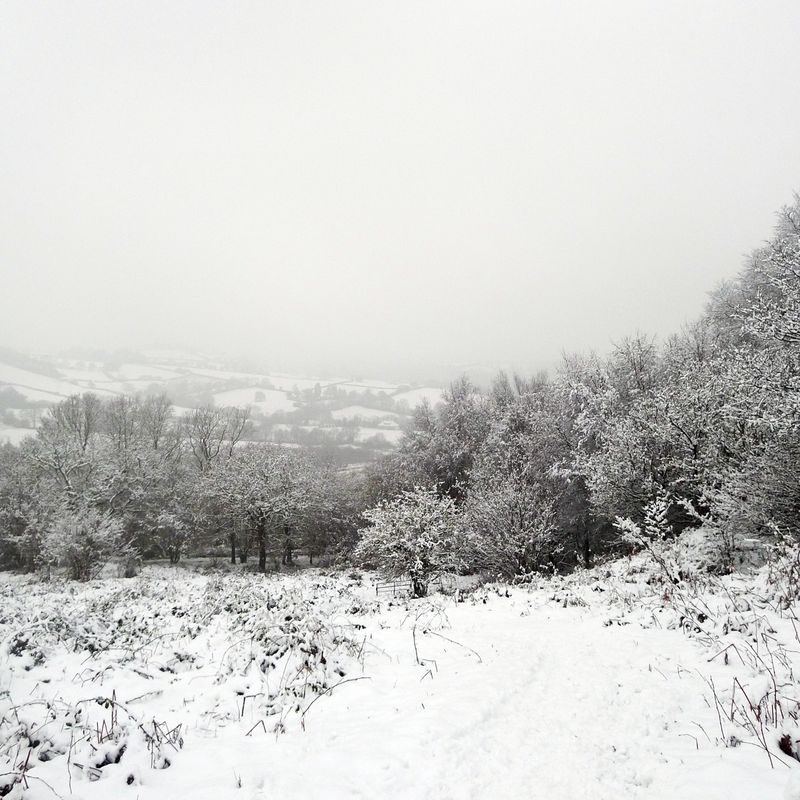 "Where you come from does matter -- but not nearly as much as where you are headed." 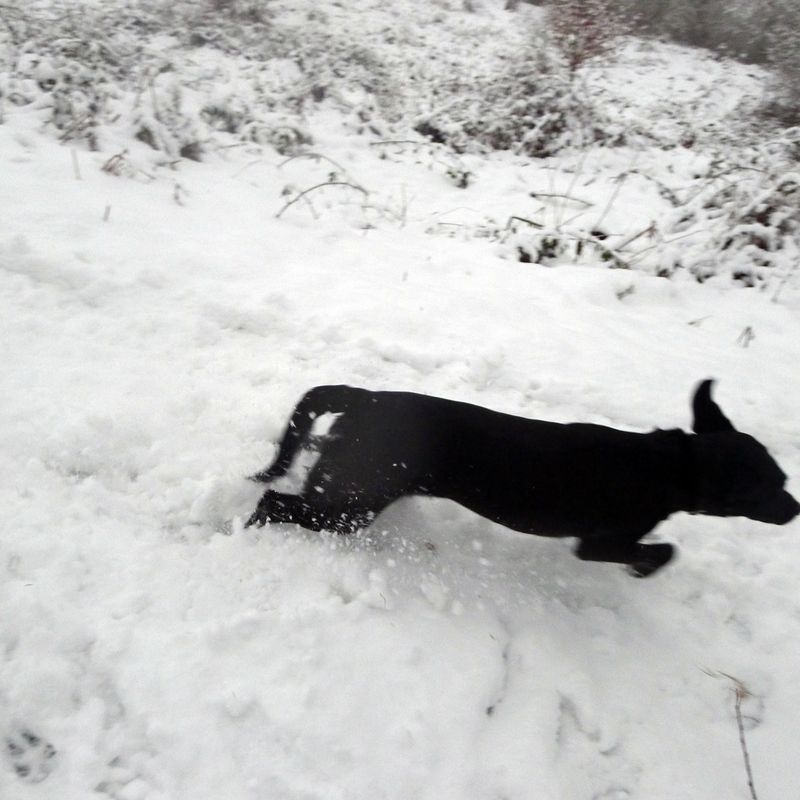 Today, four wintry songs from four countries for you...

Above: "Goodbye England (Covered in Snow)" from the English singer/songwriter Laura Marling. Marling, who first started making a name for herself in the London folk scene when she was just 16, turns 23 on Friday. (Happy birthday!) For more Laura Marling, I recommend a video recently recorded in a back alley in Melbourne, Australia: "Don't Ask Me Why/ Salinas."

Below: "January Hymm" by the American alt-folk band The Decemberists (Portland, Oregon), fronted by singer/songwriter Colin Meloy. The song is from their 2011 album The King is Dead.

"The Winter Hours" by The Deep Dark Woods, from Saskatoon, Canada. The song is from their third album, Winter Hours (2009).

"Árvas" by the Sami singer/songwriter Sofia Jannok, from Gällivare, Sweden, whose music is influenced by the Sami yoik tradition.

And now I want to throw this open to you:

What are your favorite songs of the season...? 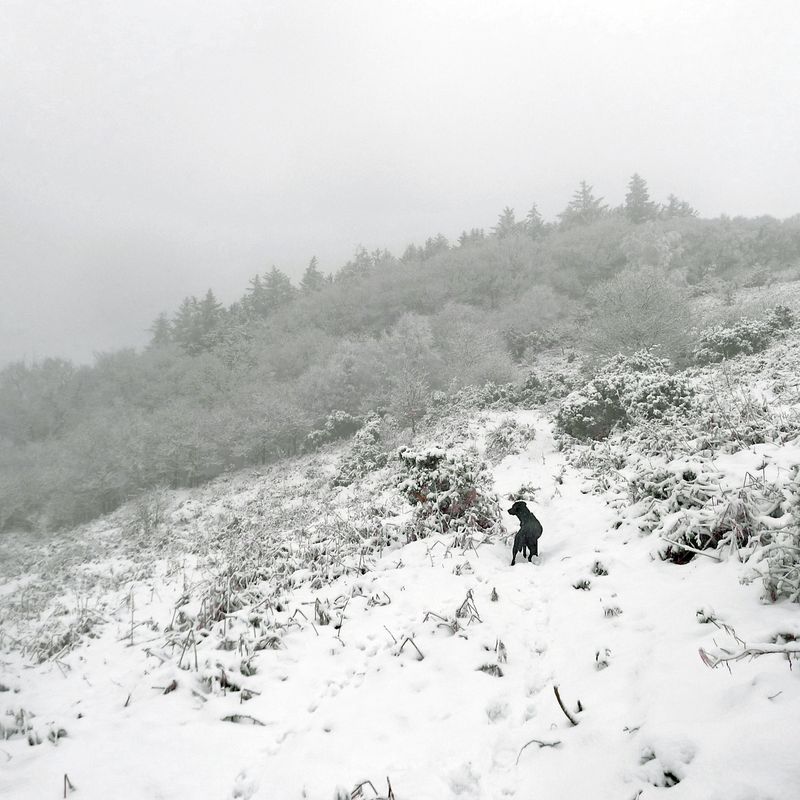 “When words become unclear, I shall focus with photographs. When images become inadequate, I shall be content with silence.”  - Ansel Adams 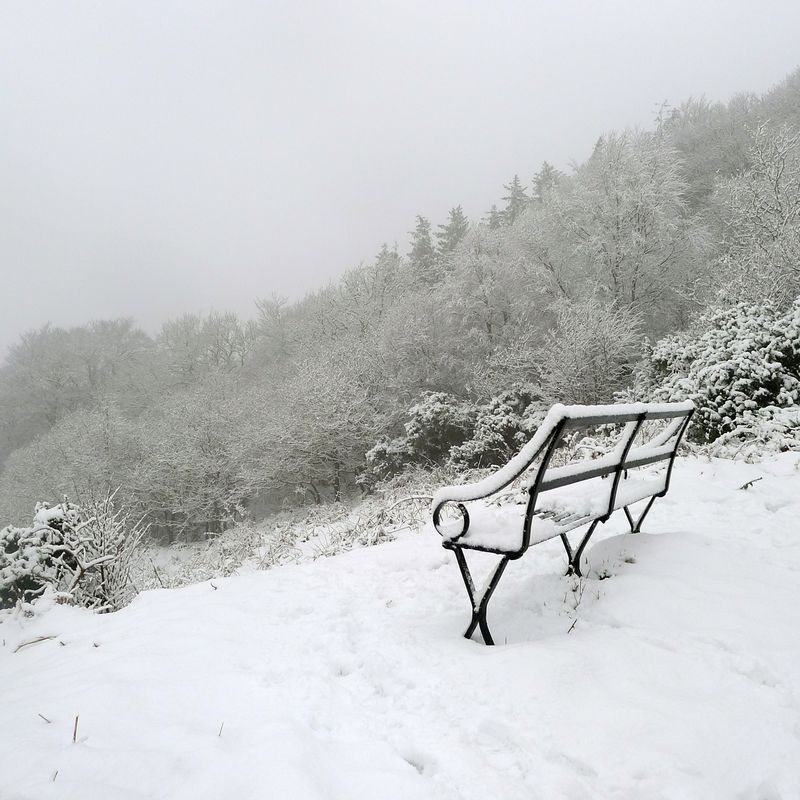 It's not really silent when Tilly and I climb our hill in the early morning, of course. There is bird song (cacophanous at this hour), the roar of water in the stream below, the breathing of the wind, and the rustle of a little black dog prowling through the bracken. Yet the sense of silence is a strong one nonetheless, created by the absence of human voices and manmade sounds; a silence that is becoming all too rare these days, and yet remains so necessary. As food fuels the body, silence fuels the spirit and imagination. Or so it is for me.

I cherish (and protect) the early morning silence that fills my studio too, although that isn't a true silence either. There's the humming of the heater, the scritching of a pen on paper, the tap-tap-tap of computer keys, the whisper of book pages turning. What I experience as silence is better described as solitude, and yet even that word is not a perfect fit, for my solitude contains multitudes: not only Tilly, snoring beside me, but also the characters conjured as I write, standing here as real as life; and bunny girls leaping and dancing on the walls; and the voices in everything I read, belonging to people both real and imaginary, fully present here either way.

Sara Maitland asks, "Is reading silent in any sensible understanding of that word? Does it deepen the silence around us or break it up? When we read are we listening to the author, conversing with the author, or are we looking more directly into the author’s mind, seeing the author’s thoughts, rather than hearing her voice? How might one define silence in relation to the written, as opposed to the spoken, word?"

And these are good questions. What do you think? 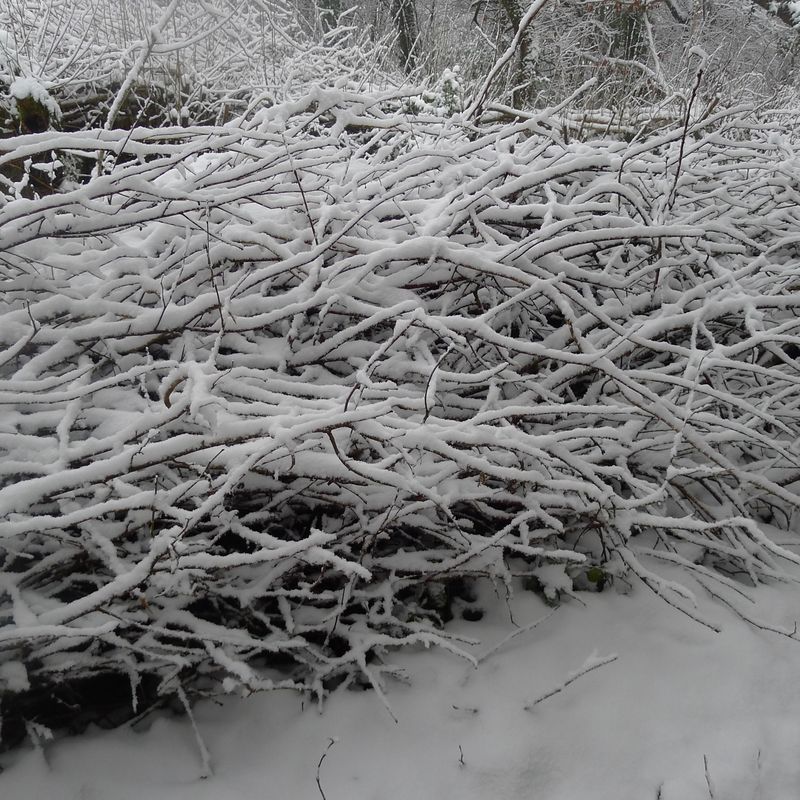 The Sara Maitland quote is from  A Book of Silence. Her new book, Gossip from the Forest, is wonderful too. For a list of thirteen books on "women and silence," go here.

in In praise of slowness, Silence, Winter | Permalink | Comments (16)