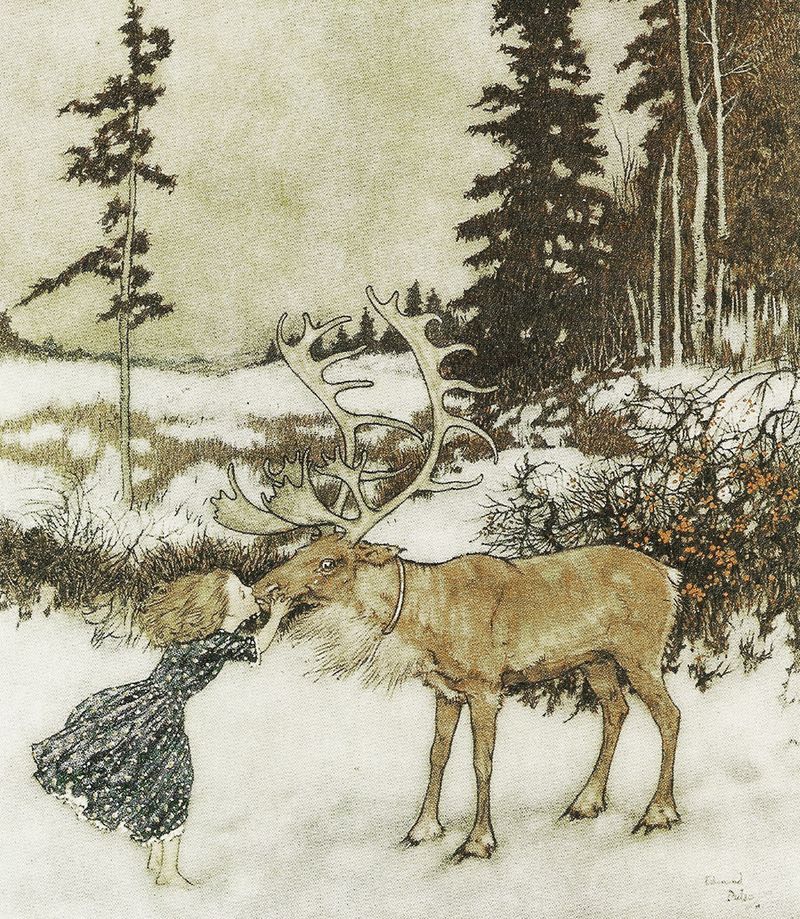 “Maybe it's wrong when we remember breakthroughs to our own being as something that occurs in discrete, extraordinary moments. Maybe falling in love, the piercing knowledge that we ourselves will someday die, and the love of snow are in reality not some sudden events; maybe they were always present. Maybe they never completely vanish, either.”  - Peter Høeg (from Smilla's Sense of Snow). 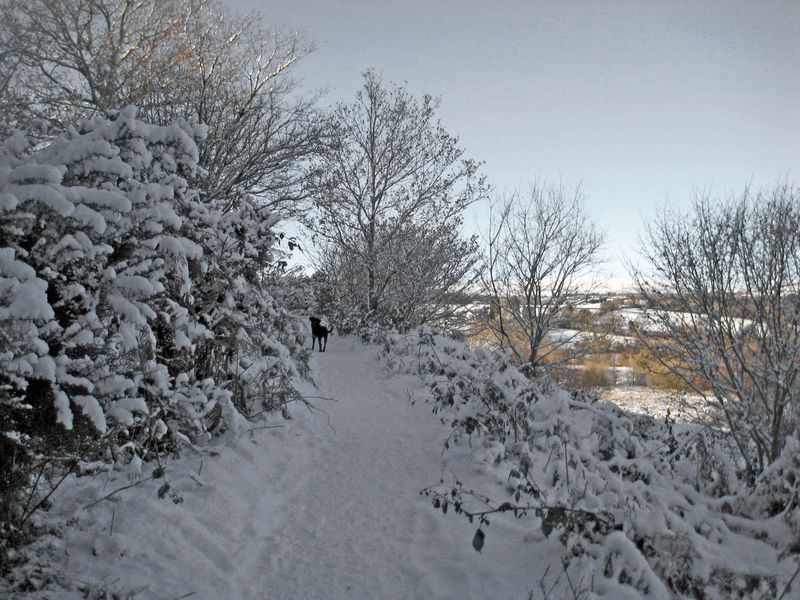 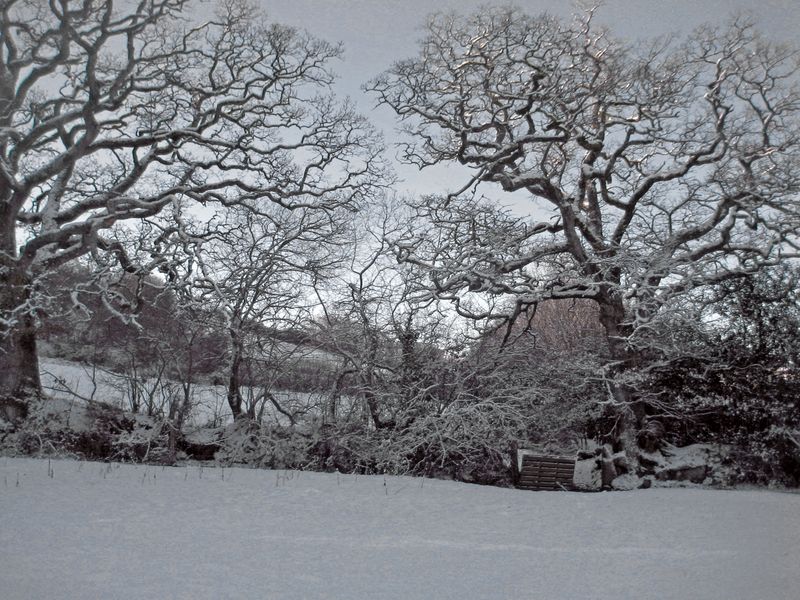 I am a book of snow,
a spacious hand, an open meadow,
a circle that waits,
I belong to the earth and its winter.
- Pablo Neruda (from Winter Garden) 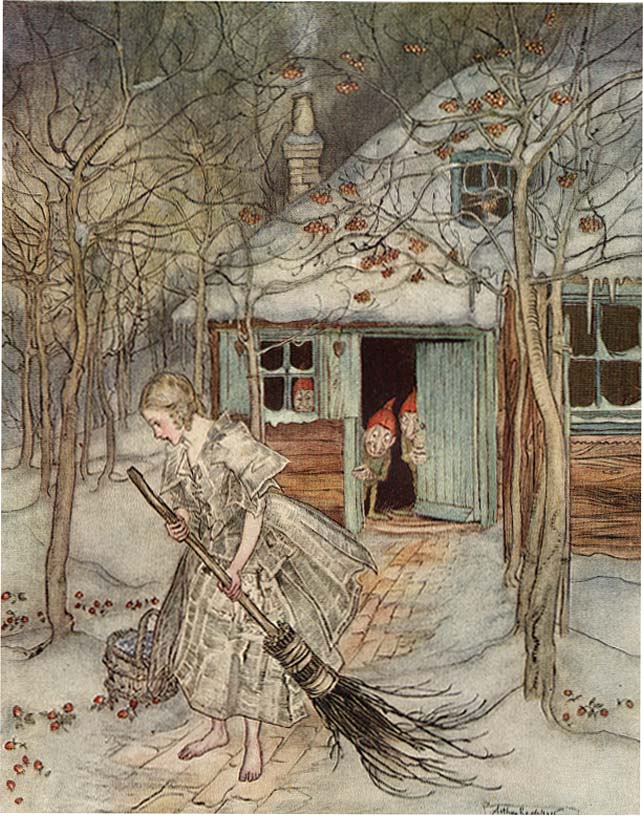 Images above: "Gerda" (from Hans Christian Andersen's The Snow Queen) by Edmund Dulac;  snow on the village Commons; and "Strawberries in the Snow" (from the Grimms' fairy tale Little Brother & Little Sister) by Arthur Rackham. 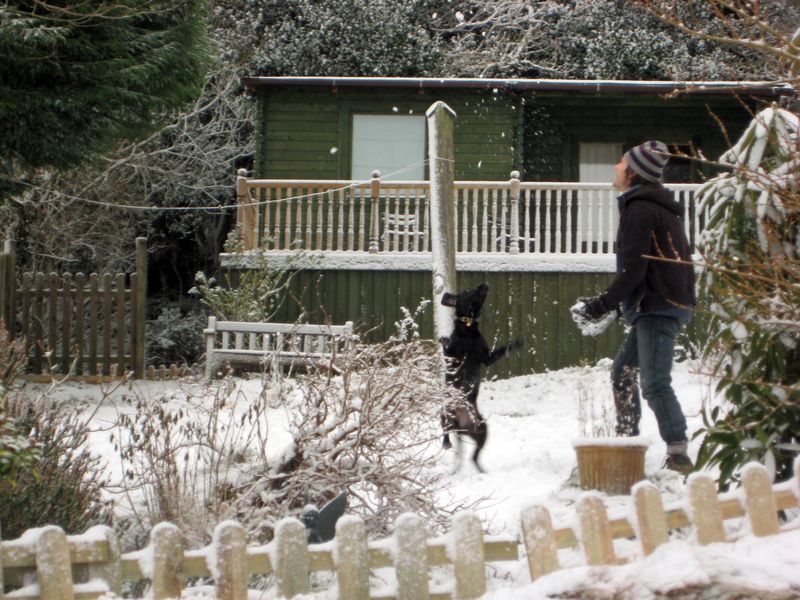 It's the first big snow of the season here on Dartmoor -- a magical, wonderful thing to wake up to. The hills are covered, the trees are sheathed in white, and as I write this, it's still coming down. This post is late because I spent the whole morning out in the woods and up on the hill with Tilly: an utterly enchanting Snow Queen's Realm. But alas, the pictures here aren't of that journey, and here's the reason why:

First Tilly and I walked in the woods (a snow white, holly green fairyland), then we made our way out to the open hill, where snow was falling thick and fast. I'd had the idea of taking photographs on the very spots where I'd shot yesterday's pictures -- which would, I thought, be a lovely way to show the landscape's overnight transformation. This, however, required a long, steep hike, made treacherous by thick, unbroken snow. Tilly was dashing about in mad delight, but I struggled and several times almost gave up -- slipping and sliding, huffing and puffing, tripping over brambles and battered by the wind. I made it to the higher path at last, pulled out my camera, and.... 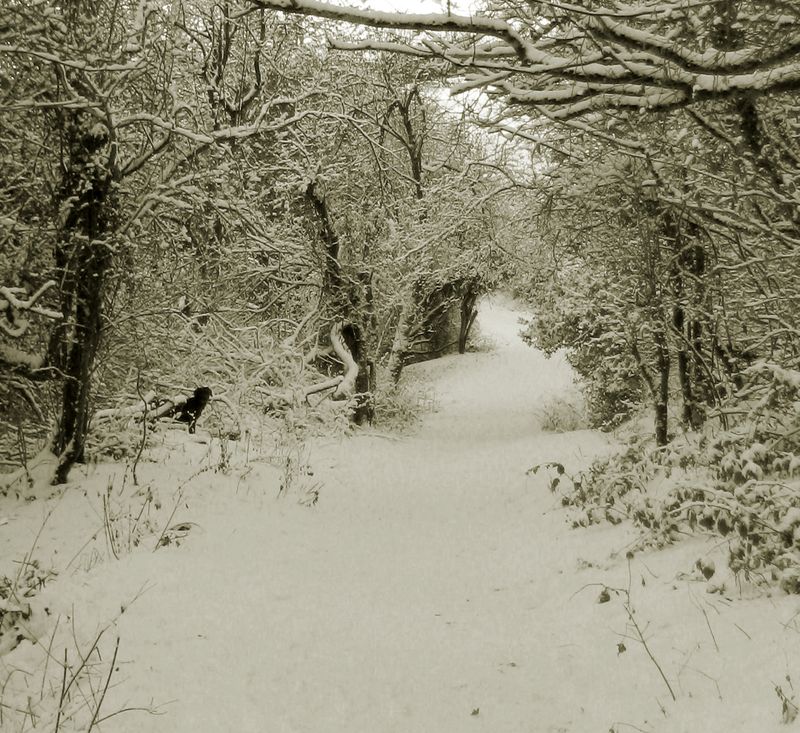 I adore my new camera, but it does have one flaw: the little mechanism that opens the battery compartment is not particularly secure. Somewhere in the woods or on the hill the little bugger had slid open once again, and the battery had dropped out. (Or else those pesky snow faeries had snatched it away, the little tricksters!)

I retraced by steps twice (so that's three journeys up and down a steep, snowy slope), but the battery was nowhere to be found, buried somewhere in a blanket of white. Tilly, meanwhile, thought this was a terrific game, going up and down and up and down again, and she was having a splendid time, surfing through the drifts like a little black snow seal.

After the third climb, I admitted defeat. The battery was good and truly lost (and that darn little thing alone was worth what my entire old camera had cost).  But clever me, I'd recently purchased a back-up battery, which was sitting back in the studio. So I slipped and slid down the hill once again (Tilly running in excited circles around me), made it through the woods and over the stream and back to the studio at last...and only then discovered that the camera company had sent me the wrong one. 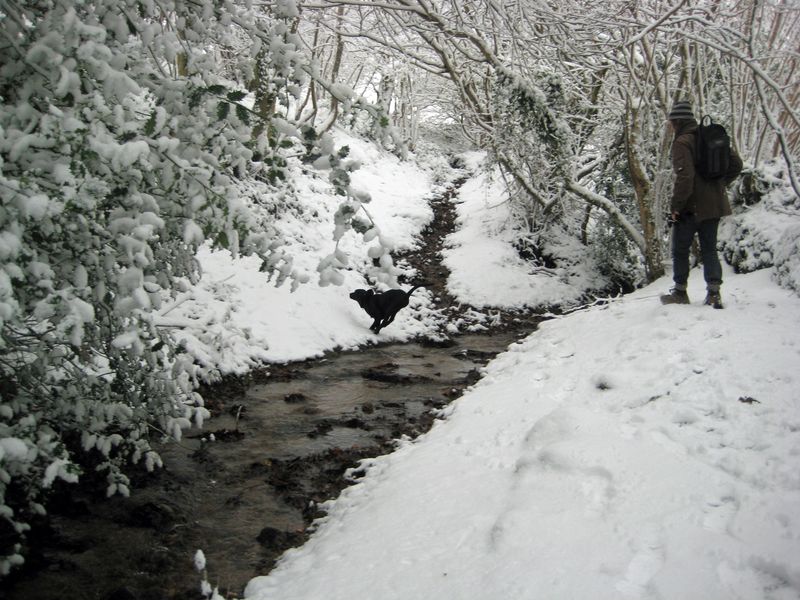 So the pictures above aren't from today at all, they're from a similar storm two years ago. I'll venture out into the snow again, no doubt, with the little old point-and-click camera that I'd been using up until last month (when Ellen & Delia gave me the fancy new one for my birthday, bless them, as their very sweet way of supporting this blog). And I've just ordered a new new battery...

...which, of course, won't be delivered until the very storm I want to photograph has passed and the roads are passable again.

The video above (which some of you will have seen) was shot in January 2010, when Tilly was six months old. It's footage from a camera little better than a cell phone so it's not exactly a work of art, but it captures Tilly's very first experience of snow. There are no special effects, the film hasn't been speeded up in any way, that's really how quickly and madly she jumps and dashes about when she's excited. (Prime example: the "Snow Dance" photo above.)

She's still like that, still a puppy when it comes to snow. And she's a happy girl today.

in Life in a Devon village | Permalink | Comments (17) 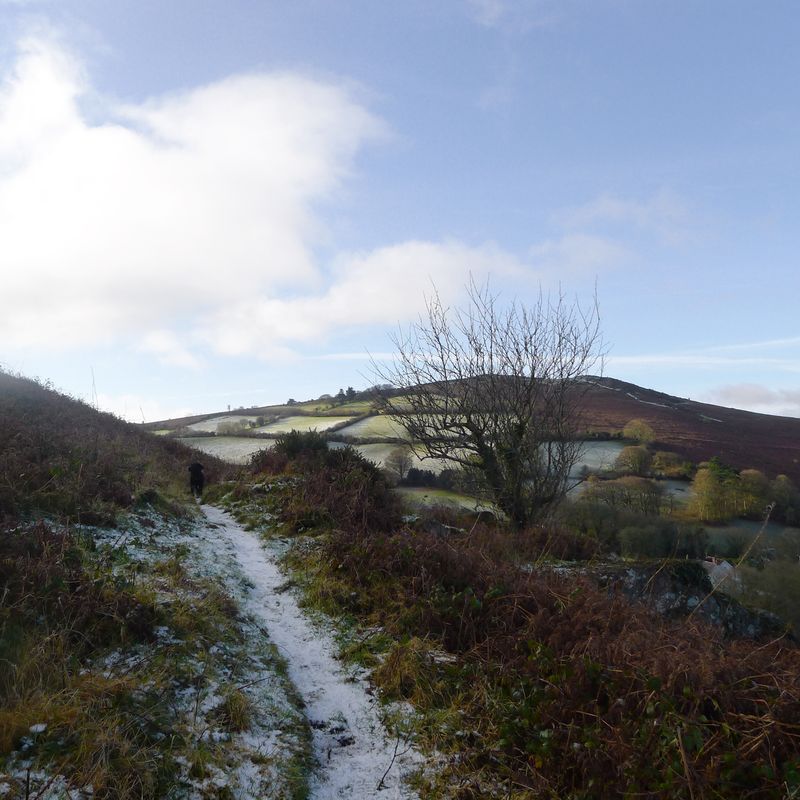 "As a child, I read because books–violent and not, blasphemous and not, terrifying and not–were the most loving and trustworthy things in my life. I read widely, and loved plenty of the classics so, yes, I recognized the domestic terrors faced by Louisa May Alcott’s March sisters. But I became the kid chased by werewolves, vampires, and evil clowns in Stephen King’s books. I read books about monsters and monstrous things, often written with monstrous language, because they taught me how to battle the real monsters in my life.

"And now I write books for teenagers because I vividly remember what it felt like to be a teen facing everyday and epic dangers. I don’t write to protect them. It’s far too late for that. I write to give them weapons–in the form of words and ideas-that will help them fight their monsters. I write in blood because I remember what it felt like to bleed.”  ― Sherman Alexie “I write to give myself strength. I write to be the characters that I am not. I write to explore all the things I'm afraid of. ”  - Joss Whedon 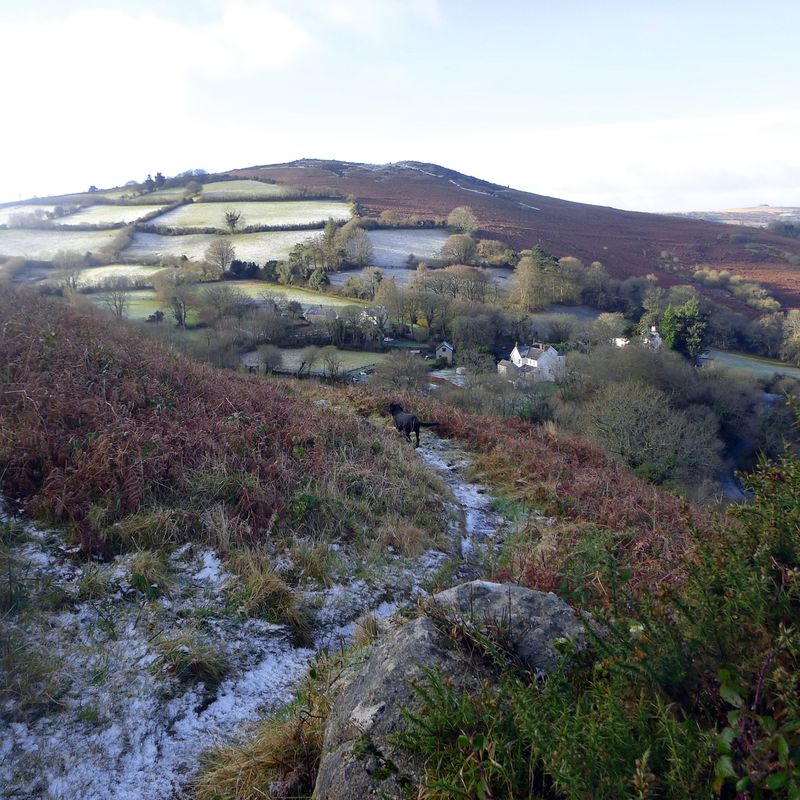 “To be an artist means never to avert one's eyes.”  ― Akira Kurosawa 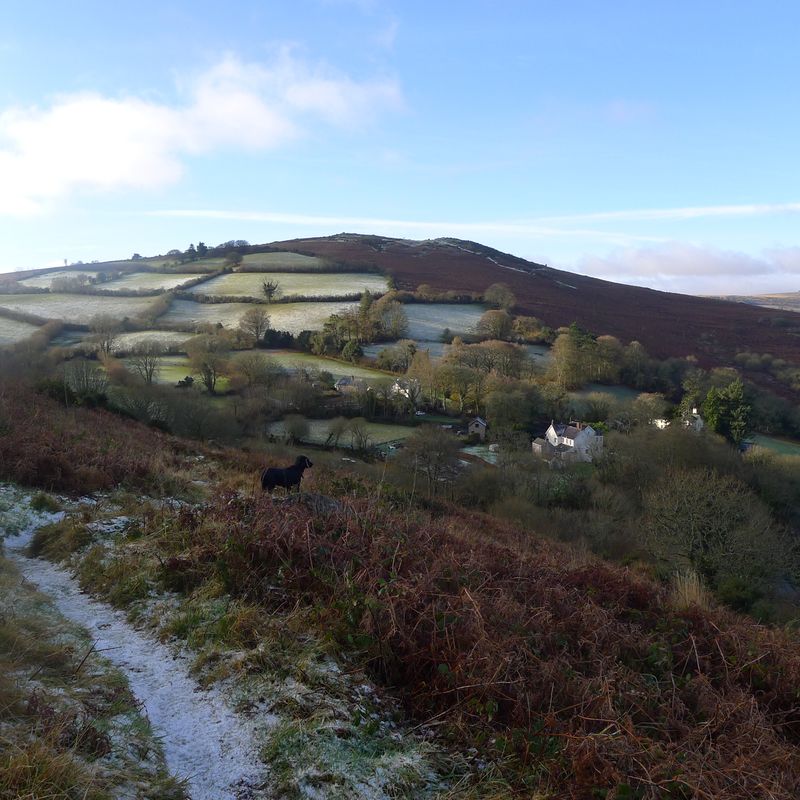 “I wrote to find beauty and purpose, to know that love is possible and lasting and real, to see day lilies and swimming pools, loyalty and devotion, even though my eyes were closed, and all that surrounded me was a darkened room. I wrote because that was who I was at the core, and if I was too damaged to walk around the block, I was lucky all the same. Once I got to my desk, once I started writing, I still believed anything was possible.” ― Alice Hoffman 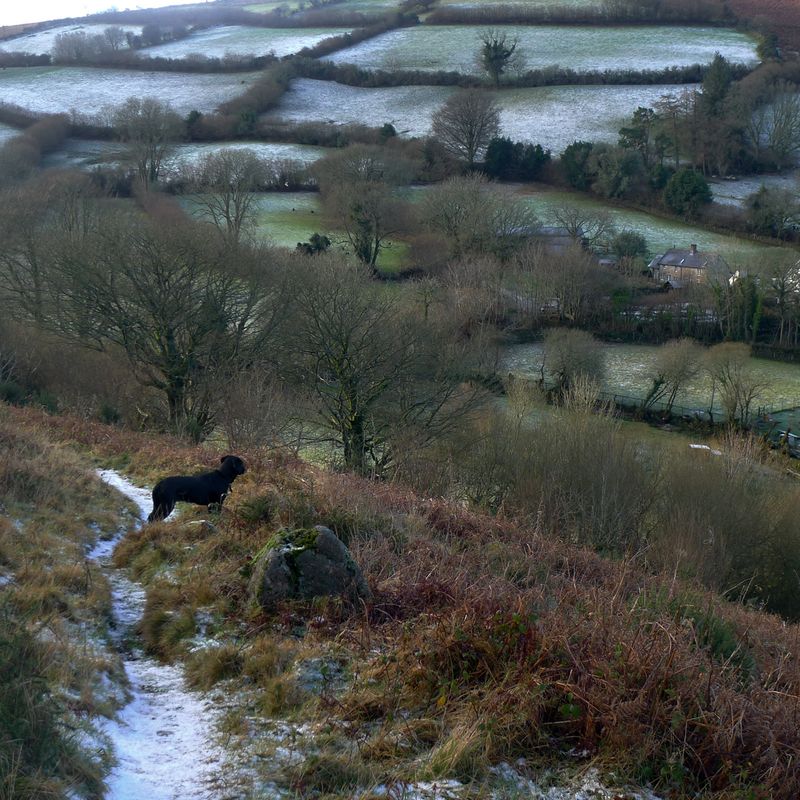 "Stories are the only enchantment possible, for when we begin to see our suffering as a story, we are saved.” ― Anaïs Nin 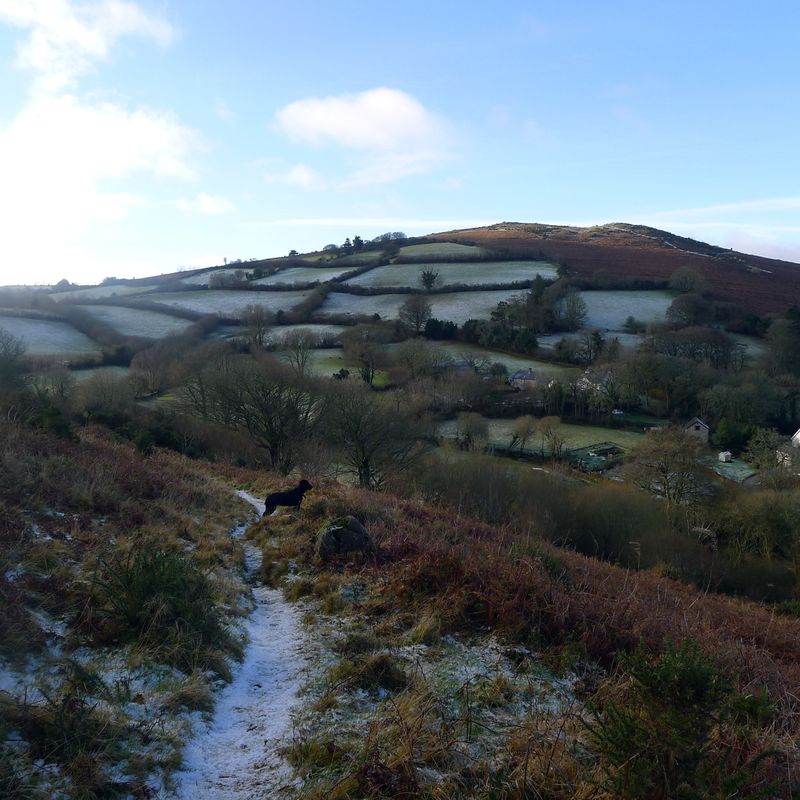 Stories have always been my salvation, my guides over every mountain and through every dark forest. Where would I be, who would I be, without a lifetime of stories to show me the way?

“I read the way a person might swim, to save his or her life," says Mary Oliver. "I write that way too.”

Mary Oliver, too, in her own quiet, luminous way, is writing in blood.

Dorothy Allison advises, "Write from your fear" ... and she of all people would know. But also write from your joy, your anger, your compassion, your love and humour and exasperation.  Write from the heart but also from the belly, the liver, the spleen, from your hands and your feet. Tell the stories that are yours and only yours to tell. And don't stop. Don't ever stop.

Images above: a light dusting of snow on Nattadon Hill, with Meldon Hill beyond. 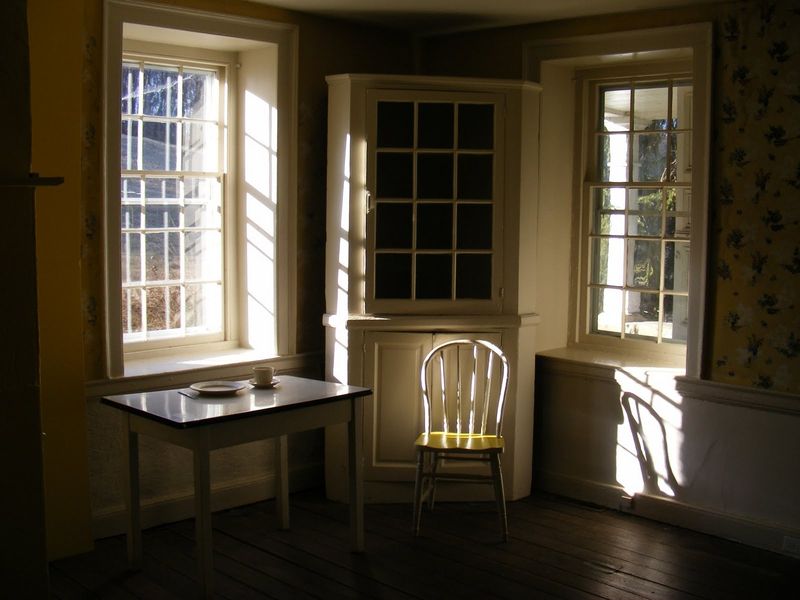 An excerpt from "How I Get to Write" by Roxanna Robinson :

"In the morning, I don’t talk to anyone, nor do I think about certain things.

"I try to stay within certain confines. I imagine this as a narrow, shadowy corridor with dim bare walls. I’m moving down this corridor, getting to the place where I can write.

"I brush my teeth, get dressed, make the bed. I avoid conversation, as my husband knows. I am not yet in the world, and there is a certain risk involved in talking: the night spins a fine membrane, like the film inside an eggshell. It seals you off from the world, but it’s fragile, easily pierced.

"....The reason the morning is so important is that I’ve spent the night somewhere else. This is nowhere I can describe exactly, only that it’s mysterious and limitless, a place where the mind expands. Deep, slow currents, far below the surface, shift me in ways I needn’t understand. There is no sound, no scrutiny. Waking, I’m still close to that silent, preconscious, penumbral state, still focussed inward. I’m still in that deep, noiseless place, listening to its voices, very different from those of the outside world."

(The full article is here.) I read Robinson's piece (on The New Yorker blog) thinking, "Oh my gracious yes, that's it exactly!" -- for I too like to be up and out to the studio before anyone else in the house is awake, climbing the hill from house to studio by the light of the stars. I don't want to speak or be spoken to; I don't want to be jogged from this liminal state; I want to rest on the delicate threshold between the Night World and the Day World just as long as I can.

At this moment as I write, the sky is still dark, the studio hushed with pre-dawn enchantment; the only sounds are the ticking of the clock, water rushing in the stream outside, and a single owl calling from the woods. I compose these morning posts as I drink my coffee, waking (as Agatha Christie's Poirot would say) the "little grey cells" up. But I musn't be too awake, not yet, in order to slide gently into the writing day before the "fragile membrane of the night" has been pierced.

Tilly snuggles up beside me, yawning, dozing, waiting for our morning walk out in the woods. The tap-tap-tap of the computer keys is a familiar, comforting sound to her. She is waiting for the sun, and the click of the laptop closing, and the words: Okay, girl, let's go. 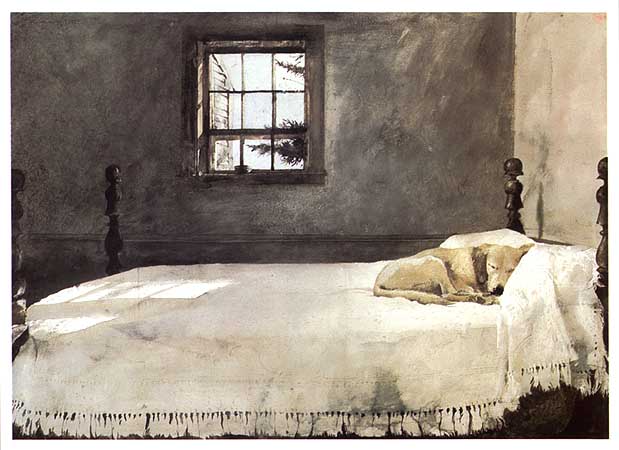 “Outside, there was that predawn kind of clarity, where the momentum of living has not quite captured the day. The air was not filled with conversation or thought bubbles or laughter or sidelong glances. Everyone was sleeping, all of their ideas and hopes and hidden agendas entangled in the dream world, leaving this world clear and crisp and cold as a bottle of milk in the fridge. ”
- Reif Larsen (from The Selected Works of T.S. Spivet)

The paintings above are by Andrew Wyeth (1917-2009). The photograph at the top of the post is of the Kuerner Farmhouse in Chadds Ford, Pennsylvania, where he often painted. 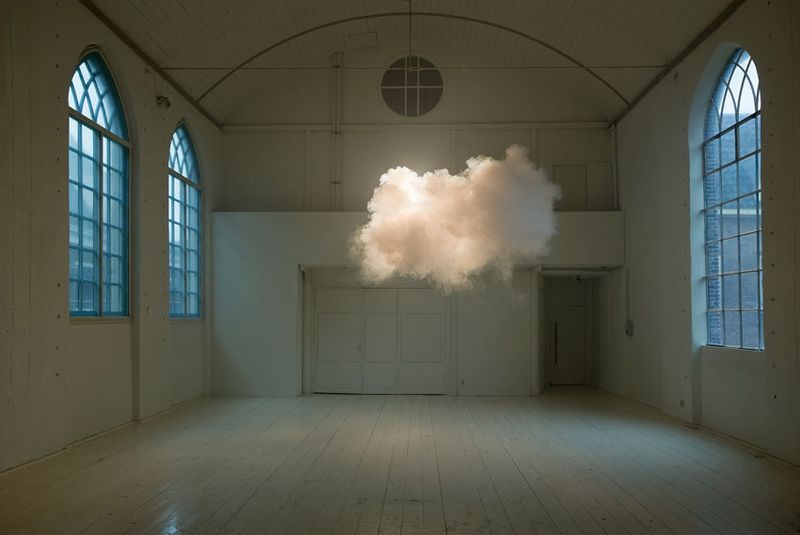 “To make myself understood and to diminish the distance between us, I called out: 'I am an evening cloud too.' They stopped still, evidently taking a good look at me. Then they stretched towards me their fine, transparent, rosy wings. That is how evening clouds greet each other. They had recognized me.”  - Rainer Maria Rilke (from Stories of God) 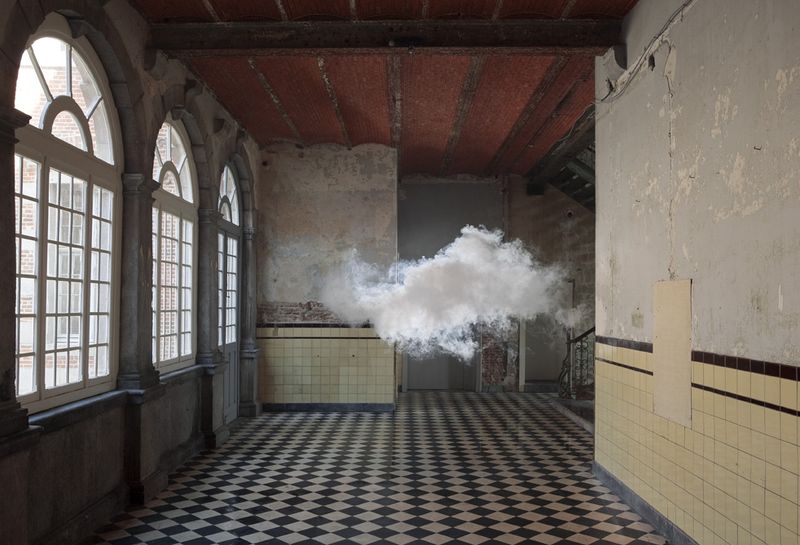 "At first they were just clouds, like any other.
Then they broke open.  This is, I suppose,
just one of the common miracles,
a transformation, not a vision,
not an answer, not a proof, but I put it
there, close against my heart, where the need is, and it serves

- Mary Oliver (from her poem "Clouds," published in Why I Wake Early) 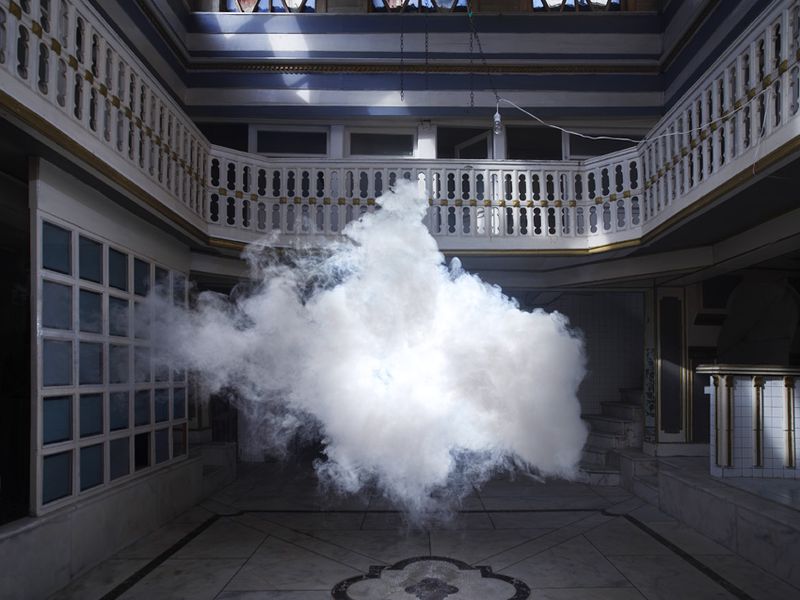 These beautiful and deeply magical images of "indoor clouds" were created by the Dutch photographer and installation artist Berndnaut Smilde.