Mist and forgiveness
Elucidating the world 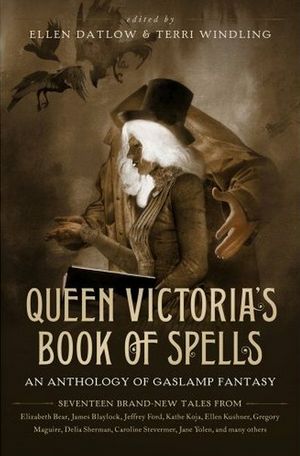 No, it's not the actual queen's birthday, but the birthday/publication day of the latest book from Ellen Datlow and me: Queen Victoria's Book of Spells...which has which has already received starred reviews from both Publishers Weekly and Kirkus. (For a list of authors in the book, go here.)

Ellen and I have chosen the term "Gaslamp Fantasy" rather than the other common appelation, "Victorian Fantasy" -- for in fact these stories can be set at any time during the 19th century, from the Regency years at the century's start to Queen Victoria's reign at the end.  Steampunk fiction is part of this genre, but there are other kinds of Gaslamp Fantasy too -- including historical fantasy (without Steampunk gadgets and googles), dark fantasy with a gothic bent, fantastical romance and mystery, and Fantasy of Manners: a brand of magical fiction that owes more to Jane Austen, William Thackeray, and Anthony Trollope than to C.S.Lewis and J.R. R. Tolkien.

As a fantasy lover, Jane Austen addict, Victorianist, and obsessive Pre-Raphaelite fan, this is a book I've long wanted to create, with all of these passion explored in its pages. The authors here range from award winners and bestsellers to rising new talent (as is usual for our books), and every one them tackled the theme in deliciously different and surprising ways.

* If you're on Twitter, there will be a "Tor Chat" on Queen V tomorrow night: Wednesday, March 20th, at 4-5 pm (American eastern standard time). I won't be on the chat, alas, because the international time difference makes it just too late for me (I am distinctly not a night owl), but Ellen will be there, along with some of the very fine authors in the book: Jeffrey Ford, Catherynne Valente, Kaaron Warren, and Leanna Renee Heiber. 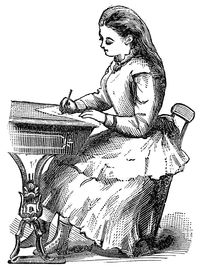 * For those of you in or near New York City, please come to the book's release party at the aptly named Queen Vic pub (68 2nd Ave at 4th Street) on March 27th. It promises to be a fabulous affair, and all are welcome. There will be readings by Ellen Kushner, Delia Sherman, Veronica Schanoes, Genevieve Valentine and Leanna Renee Heiber...plus a Victorian dessert competition judged by Ellen Datlow. (To enter, bring something sweet for Ellen to try, and extras to share with other attendees. The winner will receive a hardcover copy of the book signed by all authors in attendance.) Queen Vic will open its doors starting at 7:00 p.m. and readings will commence at 7:30. You can contribute to the mood by attending in your favorite Victorian or steampunk/gaslamp finery--not mandatory by any means, but "lovingly encouraged."

* If you'd like to read Jane Yolen's fabulous contribution to the book, "The Jewel in the Toad Queen's Crown," you can find it on Tor.com here.

Queen Victoria's Book of Spells bas been published by Tor Books (a quick shout-out here to our Tor editor, Liz Gorinsky), and is available, as of today, in hardcover, paperback, and ebook editions. Happy birthday, Queen V! 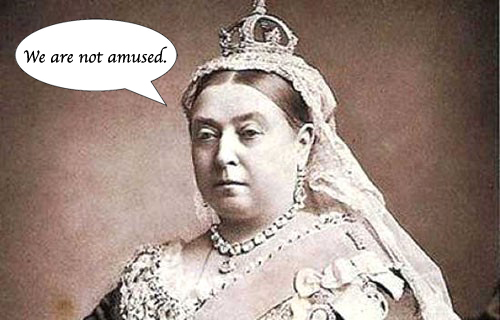 The cover art for Queen Victoria's Book of Spells is by Allen Williams.

Congratulations! I'm eager to read this one!

Oh, my goodness! I stumbled upon your site several weeks ago, bookmarked it and have so enjoyed catching up every morning. (I'm currently reading the Artist's Way and taking oil painting, and your site blends perfectly with that.) THEN I discover that the site belongs to YOU, one of my favorite editors. Thank you, thank you, thank you for all the wonderful adult fairy tales over the years.

Terri - a huge congratulations to you all! What an accomplishment, it looks wonderful!

Wow the beat goes on, and on. Congratulations Terri. I'll be on the lookout for The Queen.

Thanks for this Terri, I really enjoyed Jane Yolens short story! x

We are so lucky to have Terri's Myth and Moor.

I did all the 12 weeks of the Artist's Way in 1997. It gave me a new perspective exactly
when I needed it. I still go on Artist Dates and keep my Morning Pages. It is magical that the author's name, Julia Cameron, is also the name of the woman in the Victorian Era who made enchanting, Pre- Raphaelite photographs. A little synchronicity, here.

Congratulations, I look forward to reading it.

So excited about this Terri! Cannot wait to get it as I have needed some good mythic fiction reading of late!

*collapses in a swoon*

can't wait to get my grubby little paws on a copy!