New dishes for the Feast

Today's first two tunes are by Laurie Levine, a singer/songwriter from Cape Town, South Africa, whose voice puts me in mind of a young Lucinda Williams (and that's no small praise). Her infuences come from American Appalachian and country music mixed with British folk and South African rhythms and instrumentation.

Above: The video for "Oh Brother," written and performed by Levine, from her third and latest album, Six Winters. Her first two albums are nice, but she seems to have really come into her own with the new one. The celle, or is that fiddle?, at the end the end of this song is just delicious. (On a more frivilous note: I love the neo-Victorian/country flavor of her clothes in this video. Back when I younger and living in Tucson, I adopted a personal style that I dubbed "Pre-Raphaelite Cowgirl." These clothes would have worked a treat.)

Below: A really lovely rendition of "Ring of Fire," written by the great Johnny Cash and June Carter Cash. I have a real weakness Cash's for music, which was the music of my childhood. Levine does the song proud. 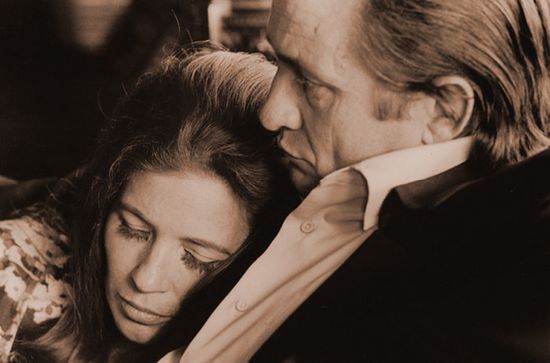 The American punk band Social Distortion, with a very different take on "Ring of Fire," bless 'em. I suspect Johnny and June would have loved it.

The Man in Black himself, performing the Nine Inch Nail's song "Hurt" in a video made shortly before June and Johnny died in 2003 (June in May, and Johnny in September). It's a remarkable and haunting piece of film.

Thanks, Stuart. Yes, I'm back in the office at last. Not feeling 100% yet, but much better than last week.

Just ordered Six Winters on the basis of listening to the above. She's great.
thanks

Ah, Social Distortion, how I love you. Punks who acknowledge the heritage of rockabilly.