The Dog's Tale
A Room of One's Own 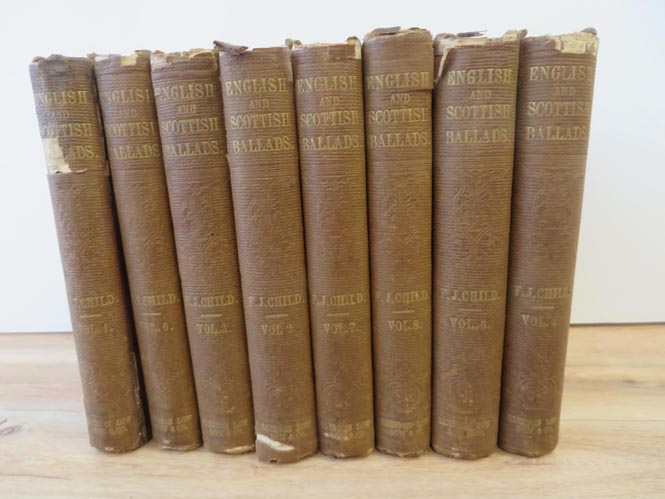 The first two songs today come from Child Ballads, a lovely new album from American folk singers Anais Mitchell (yes, she was named after Anais Nin) and Jefferson Hamer. The album is exactly what you'd expect from the title: songs drawn from Francis J. Child's great collection of English and Scottish Popular Ballads, first published (in ten volumes) in the 1880s and '90s. Although deeply rooted in the landscape and folk tradition of the British Isles, these songs made their way over to the New World with Anglo-Scots immigrants and thus became a vibrant part of America's folk heritage too -- particularly in the eastern Appalachian, Blue Ridge and Smoky mountain regions. Francis Child was American himself, a scholar of literature, language and folklore at Harvard University in Boston.

Below: "Tam Lin," Child Ballad 39, a faerie ballad from the Scottish Borders.

There have, of course, been many fine poems, short stories, children's books and fantasy novels based on the Tam Lin ballad. The latter includes Perilous Gard by Elizabeth Marie Pope, Tam Lin by Pamela Dean, Fire and Hemlock by Diana Wynne Jones, Winter Rose by Patricia A. McKillip, An Earthly Knight by Janet McNaughton, Deersnake by Lucy Sussex, and The Queen of Spells by Dahlov Ipcar.

Carrying on with the Child Ballads theme:

Reaching into the past, below: "The House Carpenter" performed by Pentangle (with John Renbourn, Bert Jansch, and Jacqui McShee) during the 1970s folk music revival. "The House Carpenter," a.k.a., "The Daemon Lover," is Child Ballad 243. Many of the mythic writers/artists of my generation grew up during the folk revival and were strongly influenced by it.

And one more: "Jock O'Hazeldean," Child Ballad 293, peformed by Maddy Prior at London's Cecil Sharpe House (The English Folk Dance and Song Society) in 2008. Prior, of course, was the lead singer in the '70s electric folk band Steeleye Span.

If you love ballads and folk music, I hope you know about John Boden's wonderful site, A Folk Song a Day. I'm addicted to it.

For a history of the folk revival in Britian, I recommend Electric Eden: Unearthing Britain's Visionary Music, a fascinating book by Rob Young.

And no discussion of ballads is complete without mentioning Charles Vess's  The Book of Ballads, an absolutely magical volume of ballads rendered in narrative graphic form. The book won the Eisner Award, and the original artwork (all 132 pages of it) is now housed in the Library of Congress collections. 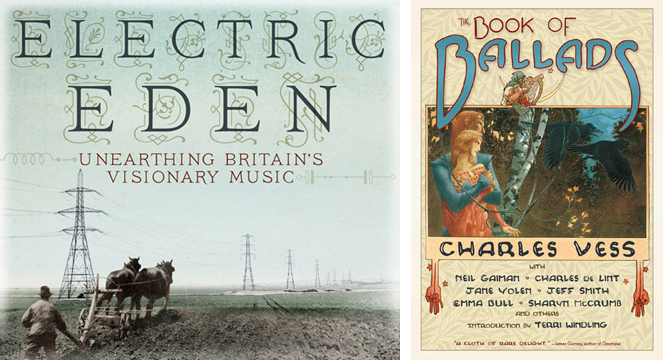 Great selection of music, Terri. Thanks for that.

I hope there's no offence if I say how odd it seemed to my ear, however, to hear Tam Lin sung in such strong North American accents that I would more normally associate with 'country and western' style (which I can also enjoy). Nice harmonies.

It's equally odd to me to hear bluegrass and country music over here sung with British accents -- though I prefer that to songs sung in fake American accents. Or fake British accents when it's the other way around.

These ballads are part of the American folk tradition too -- so much so that Cecil Sharpe went to America to gather many Anglo-Scots ballads that had been all but lost in the British Isles.

I would like to whole-heartedly recommend Anais Mitchell's "Hadestown" - it's a folk opera with many fabulous artists contributing to a retelling of the Orpheus & Eurydice story. Seriously, seriously good stuff.

...just had to chime in with that before I even got to listen to the other things you've posted here. :)

For more Child's ballads I cannot recommend this album enough, the description from the website is perfect:

For another American version, Handsome Family's "House Carpenter" is one of my favorites.

I don't mind *too* much the 'fake accent' thing.

It can just be part of the music, part of the performance. Personally I find it almost impossible to read Ivor Cutler without letting a bit of Scots creep in! The rhythms just don't work otherwise.

I'm very interested in what you note about Cecil Sharpe. I suspect a lot of European tradition was preserved by being carried into the colonies.

I think North American culture is a wonderful, magical melting pot - and has certainly produced some of the best music in every genre. Poetry, too.

I just wanted to pop in and say thank you, Terri, for the wonderful recommendations!

Some of my favourite (favorite?) musicians, music and literature. Another brilliant post from Terri. Many thanks :)

John Fleagle is new to me. Thank you so much!

I've wanted to hear the Child Ballads for awhile. (I remember hearing that when Child went from the US to Britain to collect British folk songs, during that same period, a British scholar came to the US to collect American folk songs.)

You're welcome! He is (sadly) a well kept secret so I love telling people about this album.