Facing fear, 4: On risk and uncertainty
The communion of the word 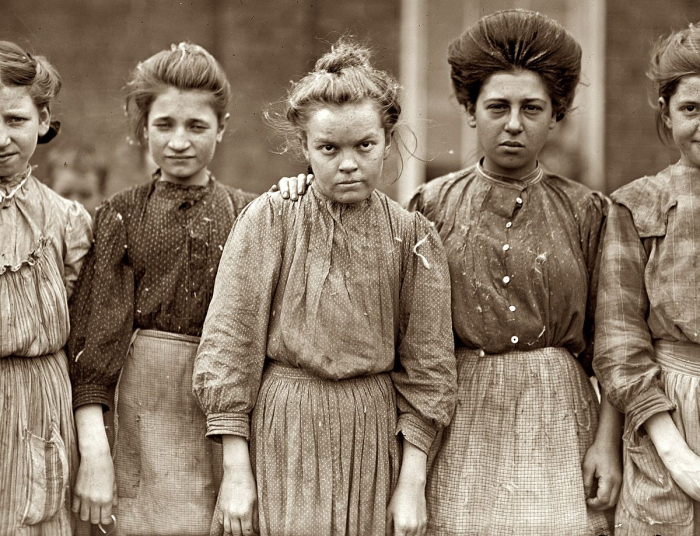 Let's start the week with some more good songs drawn from the folk tradition of the British Isles:

Above: Pilgrims Way, a trio from the northwest of England, performs "The Handweaver and the Factory Maid."  The song comes from their 2011 debut album, Wayside Courtesies. (The photograph above is of cotton mill girls in 1909.)

Below: David Gibb & Elly Lucas, a folk duo out of Derbyshire in the English Midlands, peform a jazz-inflected version of "The Blacksmith."  It comes from their 2012 album, Old Chairs to Mend (which also contains charming original songs like this one).

Next: Jim Moray, based in Bristol, performing "Lord Douglas," a variant of  the Child Ballad "Earl Brand." The song comes from his fifth album, Skulk.

I confess I've been on the fence about Moray's music in the past, which mixes folk, rock, pop, and electronica -- but he's completely won me over now with Skulk, in which the traditional roots of the music are foregrounded a bit more. And lordy, what a beautiful voice he has for folk material. The album's name, says Moray, comes from the collective noun for foxes, inspired by fox legends and lore. (For more of his music this morning, go here.)

And last (because what could possibly follow this?): Sam Lee's rendition of "The Ballad of George Collins," from his 2012 album Ground of Its Own. It's a great song from a great, great album -- but this one gets my vote as the wackiest damn video of the year. Wonderful, and thoroughly magical, but truly wacky too. See if you don't agree.

Lee, who comes from "a Jewish family of artists in Tufnell Park, north London," collected many of the songs he performs from Britian's Romany Gypsy community. There's a fascinating article about him on The Guardian's site here, which I highly recommend. How I'd love to have a long natter with this lad...preferably under the stars beside a warm campfire, with a bottle of good single malt whiskey to hand....

The dancing in Lee's video reminds me of Rite of Spring! http://www.youtube.com/watch?v=NOTjyCM3Ou4

I enjoy all of the music you provide on Monday morning, but, Sam Lee, oh! my. Such a rich tapestry of visual representation of the story. Incredibly moving and inspiring. Thank you so much for including him.

Wow. I LOVE all these beyond reckoning--especially the absolutely yummy and shiversome "George Collins," which is utterly interstitial and absorbing, sophisticated and primitive all at the same time. Lovely start to the morning. Thank you.

'.preferably under the stars beside a warm campfire, with a bottle of good single malt whiskey to hand....' perfect. Thank you x

I've been on a Child Ballad kick lately, due to a lecture by Stephen Winick, and etc. So looking into the Earl Brand (Lord Douglas) #7 and finding out that it inspired Frederick William Burton's painting, the "The Meeting on Turret Stairs", a personal favorite in the Pre-Raph genre, and once more, you manage to bring my loves all together in one place. Thanks.

Excuse me. I hadn't watched the final video yet...so....ahem...
What?
Ok. Awesome. Odd. Something else. Speechless.

Read the article about Sam Lee that I've linked to, Shane. He's a kindred soul.