On Singing & Music
What Tilly and I saw on our morning walk...

After posting photographs of the Morris troupe dancing near Fingle Bridge last week,  I was reminded of my favorite local troupe: Beltane, performers of the wild, almost shamanic form of the dance called Border Morris. 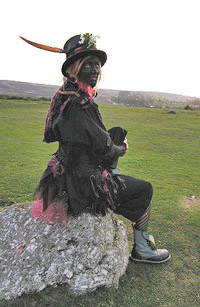 Americans tend to view Morris dancing as a quaintly charming slice of "olde England," and don't often realize how many of the English themselves find it hopelessly twee.* (This is the kind of dance they're generally thinking of.) As an oft-repeated quote (variously attributed to Thomas Beecham, Wilde, Shaw, and others) says snidely: "Try everything at least once once, my dear, except incest and Morris dancing." Personally, I like Morris dancing of all sorts (thereby "outing" myself as deeply uncool); and I especially love modern Border Morris as practiced by younger troupes like Beltane, with goth, punk, and neo-pagan leanings.

Border Morris originated in the west of Britain -- probably sometime in the late Middle Ages, arising from dance traditions that were older still -- developed primarily by dancers and musicians along the border of England and Wales. The distinguishing characteristics of Border Morris (as opposed to other forms) are shorter sticks, higher steps, ragged costumes, 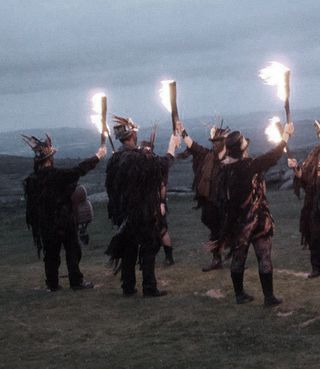 blackened faces, and larger bands of musicians. The history of the blackened face is much disputed: it may have had ceremonial significance in the dance's deeply pagan origins; or it might have been a form of disguise adopted in years when Border Morris was frowned upon as rowdy, subversive, and un-Christian.

It certain is rowdier than most other forms of Morris; it's also more overtly pagan, and thus (to me) more powerful. Often performed at sacred times in the Celtic lunar calendar, the dances invoke a palpable magic tied to the land, the seasons, and the mythic wheel of life, death, and rebirth. Like other forms of sacred dance the world over, the drum beat and the dancers' steps weave patterns intended to keep the seasons turning and maintain the balance of the human/nonhuman worlds. Yet in contrast to other, more mannered forms of Morris, Border dancers unleash an energy that is earthier, lustier, more anarchic...both joyous and unsettling to watch, especially by dusk or firelight. 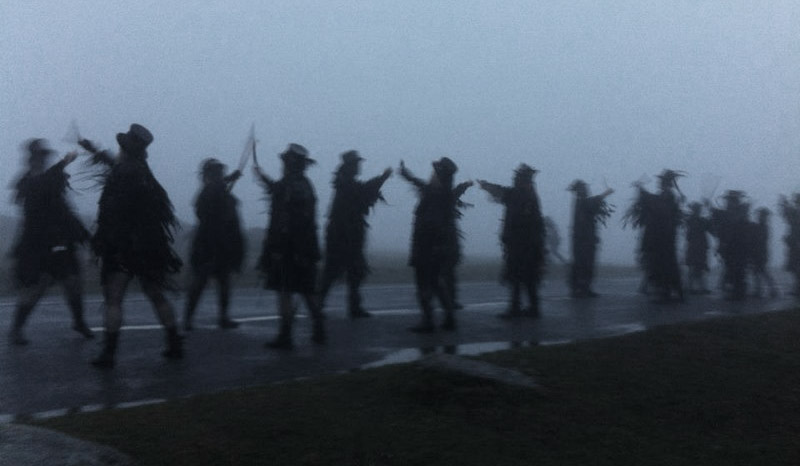 Howard and I  once came across Beltane dancing in our village square, just as dark began to fall. At one moment in the dance, the music went quiet. The troupe dropped to their knees in unison, sticks pounding the ground in a slow, steady rhythm. Then, just as slowly, the dancers rose...the music started faintly...quickened and loudened...and the dance romped on again. It was breathtaking to watch: both beautiful and chilling. If a portal into Faerie had opened at that moment, I would not have been at all surprised.

In the video at the top of this post, Beltane performs a Fire Dance at the dawn of May Day (Beltane), 2012. The dance took place on Dartmoor, on a foggy crossroad near Hay Tor.

Below, a dance for Winter Solstice at Stonehenge, filmed last December. 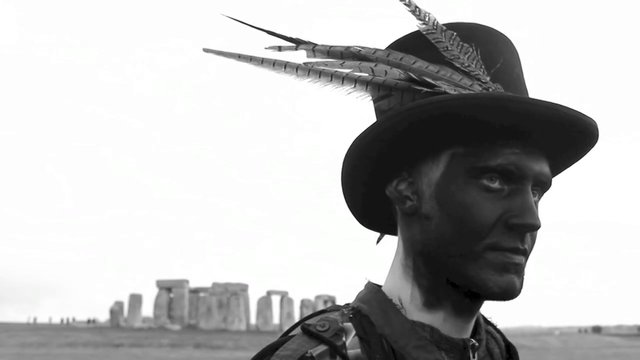 And last, just for fun:

Dancing in the sea. This video (complete with wind and barking dog) was filmed at Teignmouth on the south Devon coast. 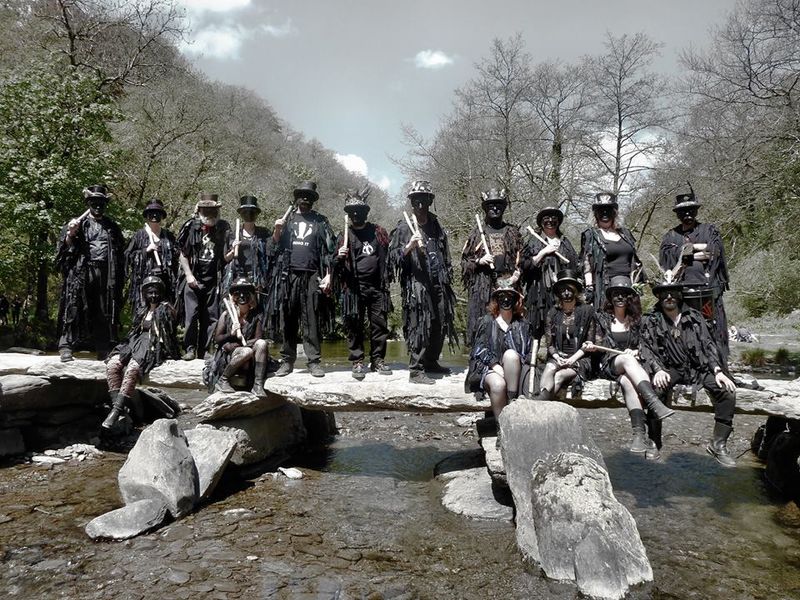 * The American equivalent of the English word "twee" would be "hokey" or "corny."

Those--but especially the first dance you posted--are the most haunting Morris dances I have ever seen. As if crow men and women had flown to earth to usher in the holy day. And yes, when they kneel and strike the ground with their sticks, expected the earth to grin open and faerie to be laid out before them in all its terror and splendor.

Agreed. And these videos don't do them justice.

Great post Terri. What a joyous bunch! Best Morris dancers I've ever seen. Love the costumes (crow like), music and ofcourse the dancing and stick clapping! Would've liked to have been there on that misty morning. Thankyou ox

An amazing dance with a rich and controversial history. I defy anyone to consider it twee if they have ever looked properly at the clogs used for dancing and the quantity of animal innards worn by the fool.

The very fact the dance allows us to follow misrule is so important; they subvert the social conventions and the fool holds up a mirror to show us how foolish we can be.

I have to say I have long thought my fear of clowns goes back to being chased by a Morris dance fool who had a pigs bladder on the end of a stick; I was only 5!

Thank you for the link, Charlotte. And you're absolutely right about Morris!

Any dance that arises from the borderlands and has goth/punk/pagan leanings is bound to spell magic.

The Sardinian version of our Morris tradition displays its ancient pagan, animistic credentials even more clearly. Here follows a link to a video about it - although for those who don't understand the commentary, you may want to just scroll through sections to see the 'ox-men' in their revels. The video doesn't do it justice. In reality these young men dance and create havoc, dressed in their skins and bells and wooden masks all through the night, stopping in at every bar to drink and in the night's depths, by the bonfire, they whirl in an hypnotic, ecstatic dance which induces a kind of trance. And those bells are LOUD. And thus they continue until dawn. I've experienced this and no video can really do justice to the raw, pagan energy that these figures emanate. Any way, here's the link: http://youtu.be/8HDPopRGGS8

Incidentally, Terri, there is no one so cool as the person who doesn't mind being uncool. :)

Those Border Morris dancers look just great - would love to see them. Just to add a little more to the Morris discussion I couldn't resist posting this trailer to one of my favourite films 'Morris: A Life with Bells On.' Hope you enjoy.

No 'twee' Morris men there!

This must be what Terry Pratchett calls "the other Morris dance" (sorry, Discworld is where I originally heard about the concept). Great music!

Reminds me of Wild Hunt, the Morris troupe of beloved memory from California. (They were the punk subset of Heart of the Oak, which was slightly more trad.) Wild Hunt set out to do Morris as it would be done in Bordertown: Doc Martyns, torn denim, piercings, tattoos, stomping and leaping. The most athletic Morris I ever saw.

How great is this? Morris dance deeper and deeper! Love the extra links commentors sent...and love you Terri for celebrating the wild pagan soul at the heart of it all ;->

wow.
Does that ever stir the soul and get the ancient-longing blood thrumming!