The path ahead
Into the Wood, 31: Swan's Wing

Into the Woods, 30: Spinning Straw into Gold 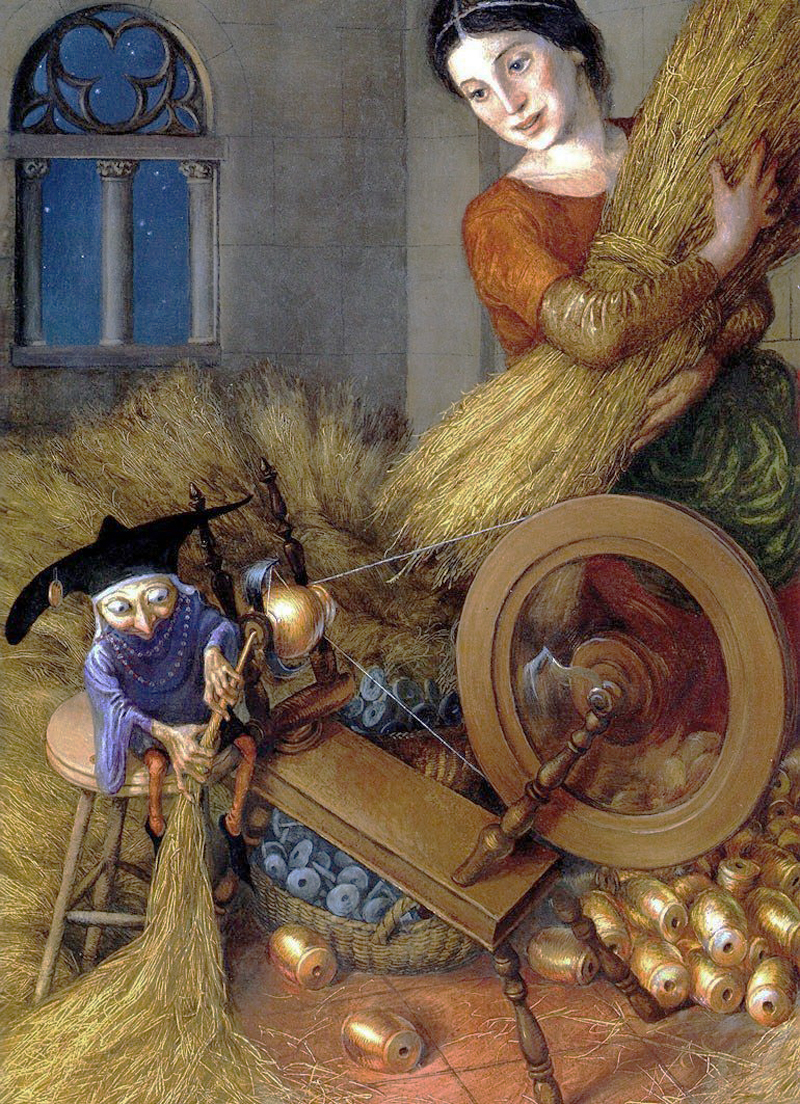 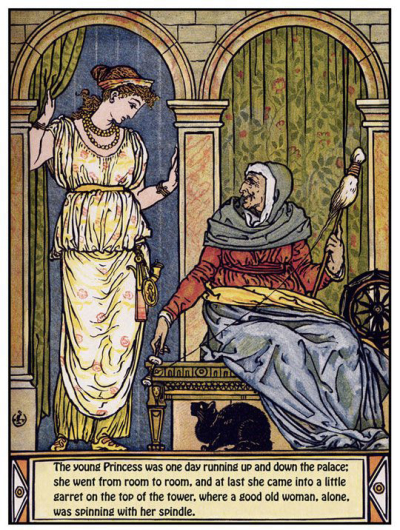 "A thread now most often means a line of conversation via e-mail or other electronic means," writes Rebecca Solnit (in The Faraway Nearby), "but thread must have been an even more compelling metaphor when most people witnessed or did the women's work that is spinning. It is a mesmerizing art, the spindle revolving below the strong thread that the fingers twist  out of the mass of fiber held on an arm or a distaff. The gesture turns the cloudy mass of fiber into lines with which the world can be tied together. Likewise the spinning wheel turns, cyclical time revolving to draw out the linear time of a thread. The verb to spin first meant just this act of making, then evolved to mean anything turning rapidly, and then it came to mean telling a tale.

"Strands a few inches long twine together into a thread of yarn that can go on forever, like words becoming stories. The fairy-tale heroines spin cobwebs, straw, nettles into whatever is necessary to survive. Scheherazade forestalls her death by telling a story that is like a thread that cannot be cut; she keeps spinning and spinning, incorporating new fragments, characters, incidents, into her unbroken, unbreakable narrative thread. Penelope at the other end of the treasury of stories prevents her wedding to any one of her suitors by unweaving at night what she weaves by day on her father-in-law's funeral garment. By spinning, weaving, and unraveling, these women master time 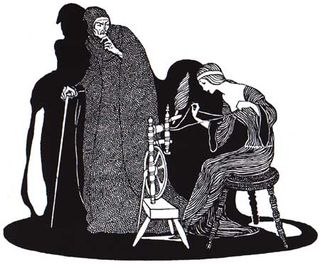 itself, and though master is a masculine word, this mastery is feminine.

"Women were spinsters before the word became pejorative, when distaff meant the female side of the family. In Greek mythology, each human life is a thread that the three Moirae, or Fates, spin, measure, and cut. With Rumpelstiltskin's help, the unnamed fairy-tale heroine spins straw into gold, but the wonder is that every spinner takes the amorphous mass before her and makes thread appear, from which comes the stuff that contains the world, from a fishing net to a nightgown. She makes form out of formlessness, continuity out of fragments, narrative and meaning out of scattered incidents, for the storyteller is also a spinner or weaver and a story is a thread that meanders through our lives to connect us each to each and to the purpose and meaning that appear like roads that we must travel." 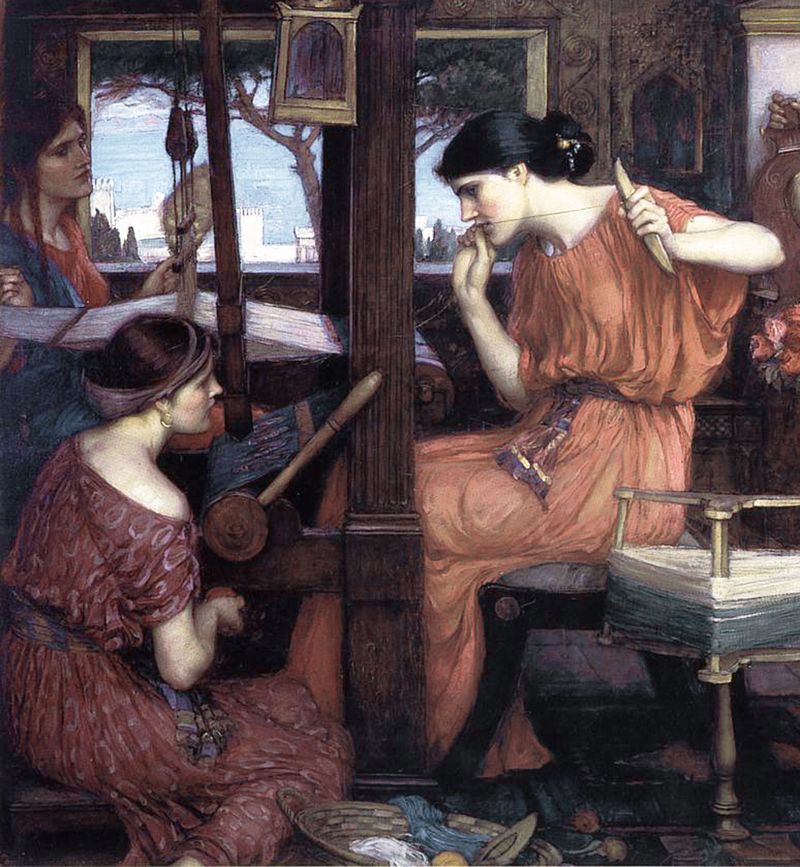 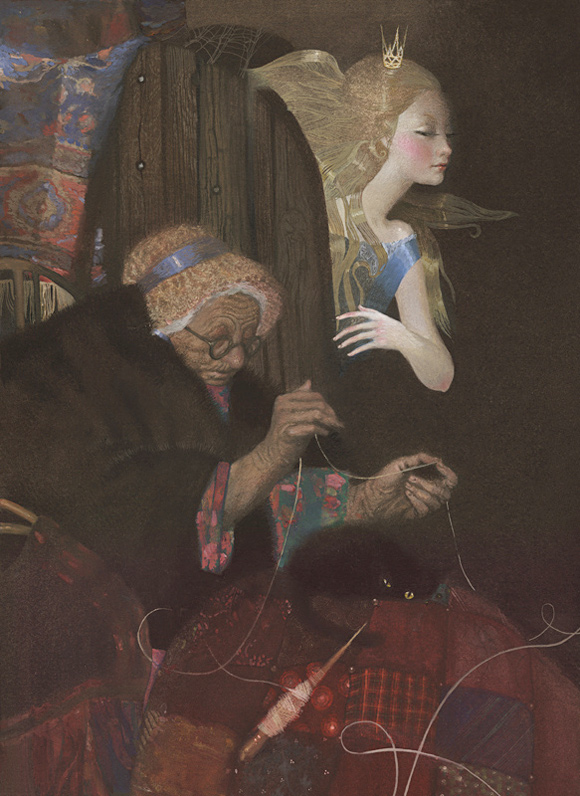 "It’s no accident that spinning is associated with language, that we may be said to 'spin' a tale or tell a 'yarn'," notes Lori Widmer Hess (in her fine essay on the subject). "Spinning brings a cosmic 'twist' into the raw materials of nature, giving them strength and continuity. When we look at events with a higher awareness, we can perceive the links between them and weave them into an ongoing story, coming to an understanding of their true essence. The spinning of straw into gold can be transformed from a mechanical search for material gain into a quest for meaning and knowledge. 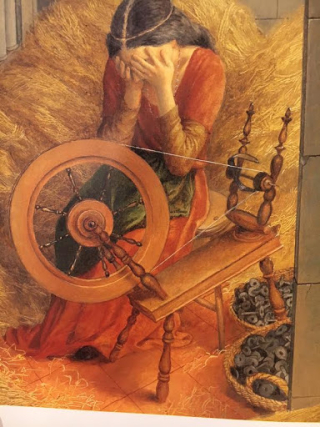 "As anyone who has tried it knows, spinning is not a mindless task. It requires constant attention not to end up with a tangled mess or a broken thread. At the same time, the rhythmical balance of manual and mental activity, hand and mind working together to produce a continuous, even thread, is deeply satisfying and calming. The spinner often finds her thoughts becoming organized along with the fiber, leading to new insights or creative inspiration. An inner 'golden thread' can be sensed, one that we can try to cultivate ever more strongly.

"This is the thread that we can try to make of our lives, when we accept the materials we are given; on the other hand, we reject them at our peril. In 'Sleeping Beauty,' for example, the king tries to avert the prediction that his daughter will prick her finger on a spindle and fall into a deathlike sleep by burning all the spinning wheels in the kingdom. He thus brings about the very fate he seeks to escape, when the princess’s curiosity leads her to touch the first spindle she sees. Destiny cannot be averted through ignorance, but only transformed through knowledge." 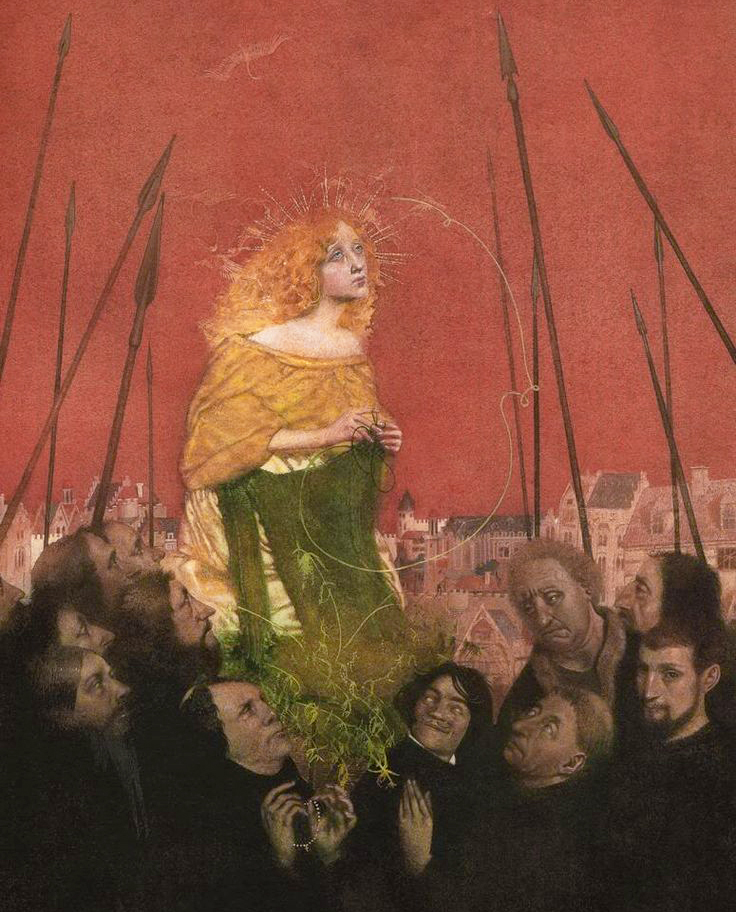 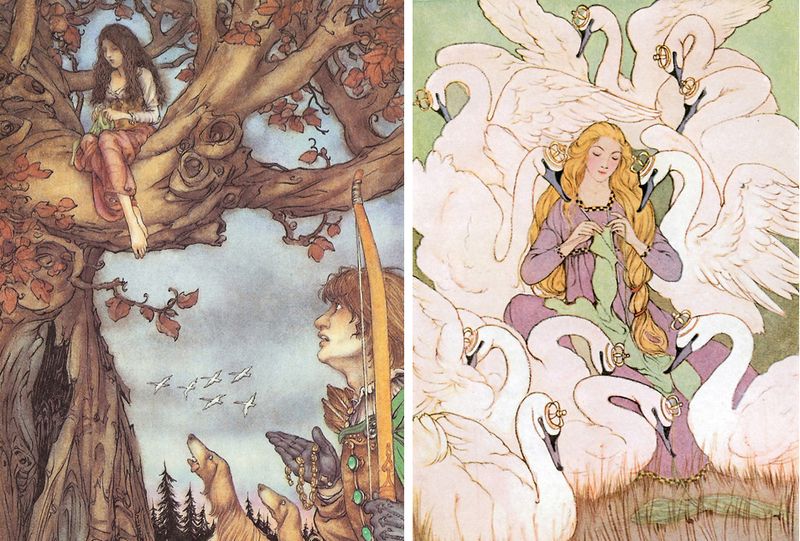 In the fairy tale of "The Wild Swans" by Hans Christian Andersen, the heroine's brothers have been turned into swans by their evil stepmother. A kindly fairy instructs her to gather nettles in a graveyard by night, spin their fibers into a prickly green yarn, and then knit the yarn into a coat for each swan brother in order to break the spell -- all of which she must do without speaking a word or her brothers will die. The nettles sting and blister her hands, but she plucks and cards, spins and knits, until the nettle coats are almost done -- running out of time before she can finish the sleeve on the very last coat. She flings the coats onto her swan-brothers and they transform back into young men -- except for the youngest, with the incomplete coat, who is left with a wing in the place of one arm.

Although the nettles in the story have magical properties (as indicated by ritual method with which they're harvested), the use of nettles for making coats is not as outlandish at it may seem to modern readers. Nettles once rivaled flax and hemp (and later, cotton) as a staple fiber for thread and yarn, used to make everything from heavy sailcloth to fine table linen up to the 17th/18th centuries. Other fibers proved more economical as the making of cloth became more mechanized, but in some areas, such as the highlands of Scotland, nettle cloth is still made to this day. 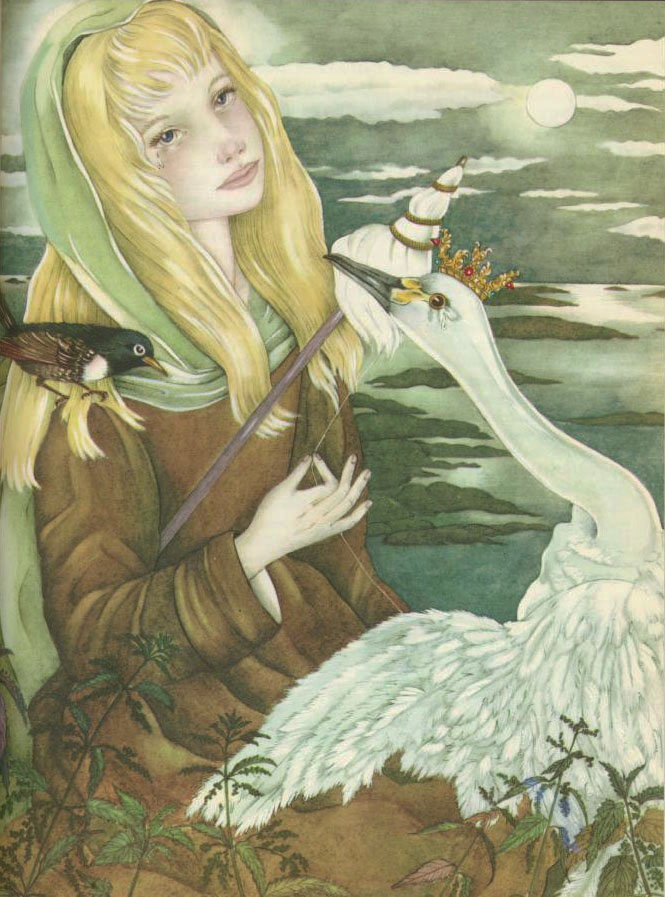 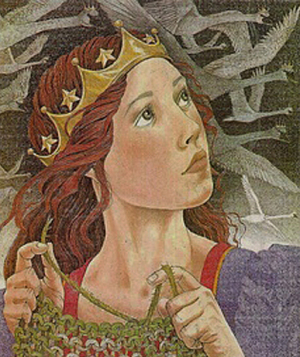 She sleeps under olive trees, praying for rescue.
In her dreams doves fly in circles, crying out her name.

For a hundred years she is turned into a golden bird,
hung in a cage in a witch's castle. Her brothers
are all turned to stone. She cannot save them,
no matter how many witches she burns.

She weeps tears that cannot be heard
but turn to rubies when they hit the ground.
She lifted her hand against the light
and it became a feathered wing.... 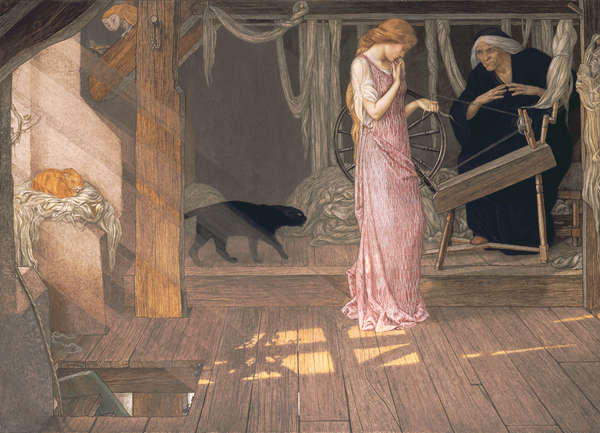 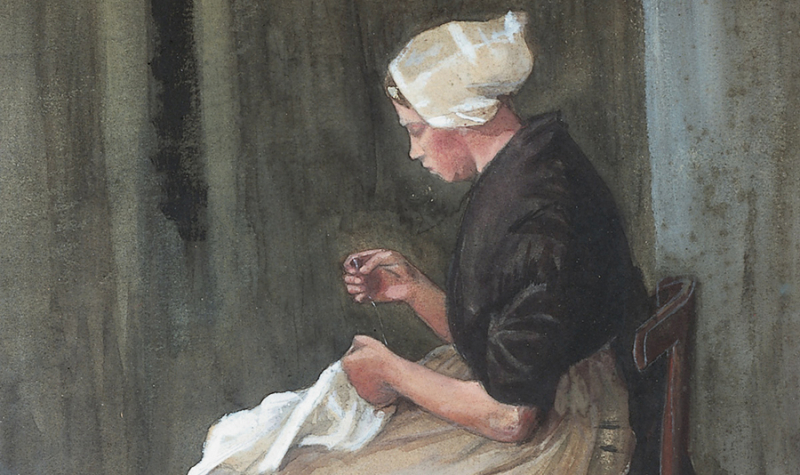 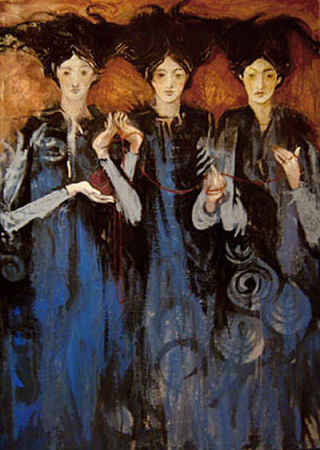 In classical myth, the Moirai (also known as the Three Fates) portion out the threads of our lives from birth to death. Clotho spins the thread, Lachesis determines its length, and Antropos cuts it off when life is at its end. In Norse myth, it is the Norns who this work at the foot Yggdrasil, the World Tree. Certain magics can knot or smooth our fate, but the thread's length cannot be altered.

Fire shadows on the wall,
A hand rises, falls, as steady as a heart beat,
Threading the strands of life.
This is the warp thread, this the woof
This the hero-line, this the fool.

Needle and scissors, scissors and pins,
Where one life ends, another begins.

"Writing fiction," says Khaled Hosseini, "is the act of weaving a series of lies to arrive at a greater truth."

So we spin our tales, knit plots and and lives together, measuring and mending, snip, snip, snip. Stir up the fire. Open the workbox. Take up the needle and let the story begin. 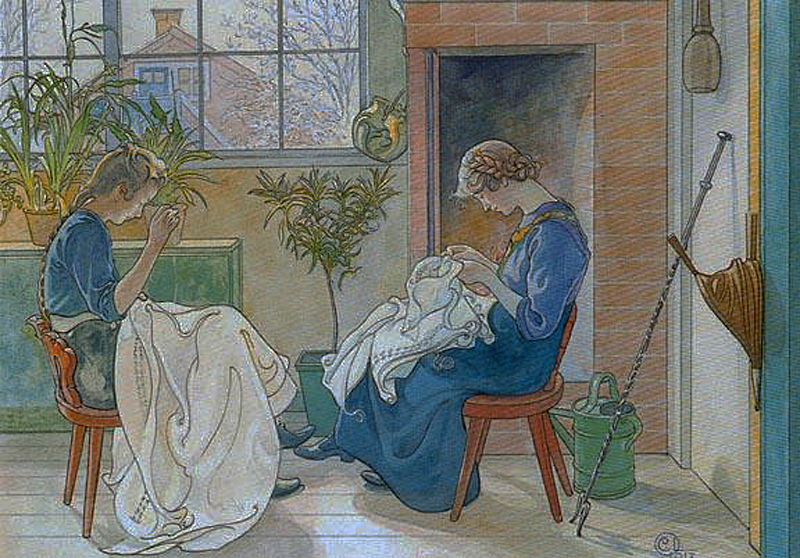 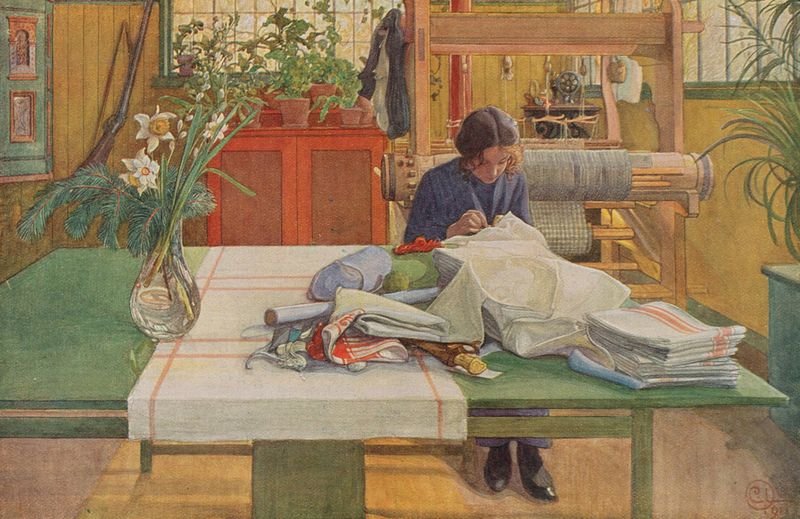 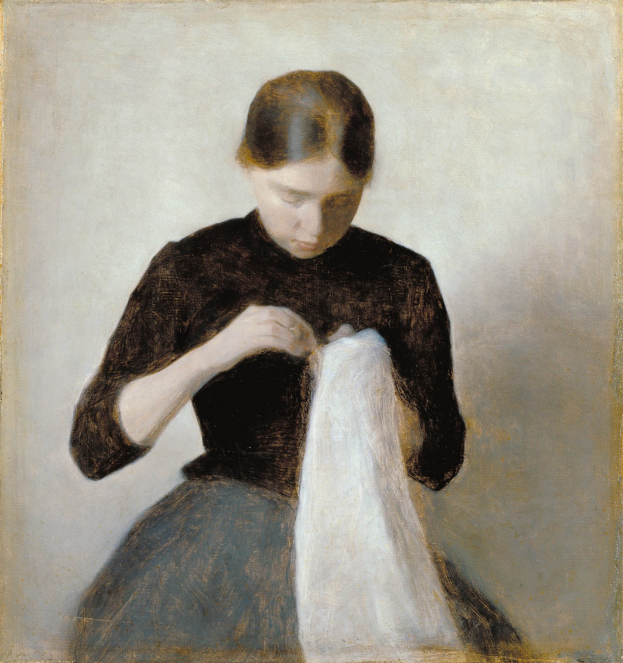 Words: The prose passages above are from The Faraway Nearby by Rebecca Solnit (Viking, 2013) and "Spinning a Tale" by Lory Widmer Hess (Cabinet des Fées, May 29, 2011). The poem extracts are from The Journal of Mythic Arts; follow the links to read them in full.  All rights to the text reserved by the authors.

in Fairy tales, Into the Woods series | Permalink | Comments (19)

A Wednesday post & I haven't even laid down to conclude Tuesday here in the Far Far West! Prompt, you are!
Lovely images and have gotten me even more excited about upcoming spinning and weaving classes this Fall!

The needle slips through this poem,
like a hot poker through butter, through ice.

Twice I have sliced my finger,
staining the cloth. I will not stop.

It is a compulsion, a love,
for those who fly on magic wings.

If I complete the shirt in time,
I will give them the chance, the choice,
to stay at home, poem in lap,
and still have air, have wind,
have sky.

As long as I can sew,
I cannot lie.

What a beautiful poem. "Twice I have sliced...magic wings" encapsulates the tale and the wider theme. I love the way a storyteller is said to weave and that telling tales are also called yarns. The need to clothe ourselves comes so close on our need to feed and stories clothe and nourish the soul.

Thanks, Charlotte--one of those poems that sipped out whole, like the hot poker through ice.

What is it to be threadbare?
Life's wear and tear.
Well worn care.

Marvelous... ( I never use that word, but it felt good here) Especially love the paintings today.

Terri (and all), have you read Jack Zipes book 'Fairy Tale as Myth, Myth as Fairy Tale'? As I remember from my own long ago reading it is a long essay detailing how throughout their multiple editions of the Grimm's Fairy Tales the brothers progressively transformed the meaning/essence of the various weavers & spinners in the tales from an act of creative transformation of the material they worked with into a mere act of drudgery. It was very interesting to say the least.
Best,
Charles

Sewing, knitting, spinning, darning and mending are fashioned for metaphor, aren't they? The three fates are such a powerful feminine archetype, and I am so pleased when they show up unexpectedly in stories. One of my favorites is their portrayal in the The Chronicles of Prydain by Lloyd Alexander, as the triple goddesses/witches Orddu, Orwen and Orgoch, who take turns living in each other's bodies.

ah spinning out the magic of our lives is a favourite theme Terri! that painting by Adrienne Segur has been breaking my heart for over 50 years!
here's a beautiful link about the importance of spinning & handwork by Renate Hillier-
http://www.youtube.com/watch?v=bfoByYLSBY8
and this wild painting of the Lady of Shallot by William Holman Hunt
http://www.thewadsworth.org/ladyofshalott/

I really, really love this post, especially as I consider how I want to spin my own life. Thank you, Terri.

I am going to have to print and save this one. I really hope some day you'll gather up your favorite posts into a beautiful book!

This was so wonderful I had to share it on my fiber arts page... thanks! I love plying my trade.
Joyce

Yes! A terrific book. Another very good book on the Grimms:
"Clever Maids: The Secret History of the Grimm Fairy Tales" by Valerie Paradiz.

Thank you so much, everyone.

i'm on the other end of the spinning now: spinning handmade paper into thread and weaving it into pages, into books. it's all so simple really, a thread holds the wor(l)d together.

forgot to write thank you terri for this.