Into the Woods, 30: Spinning Straw into Gold
Into the Wood, 32: Swan Maidens and Crane Wives 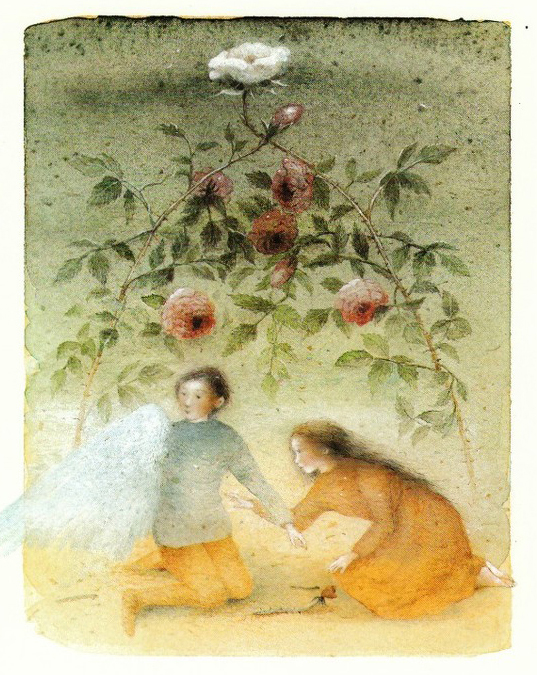 From The Faraway Nearby by Rebecca Solnit:

"Fairy tales are about trouble, about getting into and out of it, and trouble seems to be a necessary stage on the route to becoming. All the magic and glass mountains and pearls the size of houses and princesses beautiful as the day and talking birds and part-time serpents are distractions from the core of most of the stories, the struggle to survive against adversaries, to find your place in the world, and to come into your own.

"Fairy tales are almost always the stories of the powerless, of youngest sons, abandoned children, orphans, of humans transformed into birds and beasts or otherwise enchanted away from their own lives and selves. Even princesses are chattels to be disowned by fathers, punished by step-mothers, or claimed by princes, though they often assert themselves in between and are rarely as passive as the cartoon versions. Fairy tales are children's stories not in who they were made for but in their focus on the early stages of life, when others have power over you and you have power over no one.

"In them, power is rarely the right tool for survival anyway. Rather the powerless thrive on alliances, often in the form of reciprocated acts of kindness -- from beehives that were not raided, birds that were not killed but set free or fed, old women who were saluted with respect. Kindness sewn among the meek is harvested in crisis... 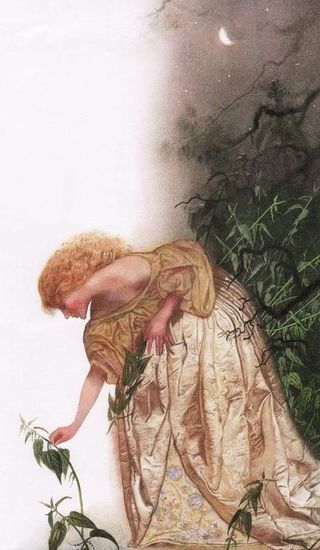 "In Hans Christian Andersen's retelling of the old Nordic tale that begins with a stepmother, 'The Wild Swans,' the banished sister can only disenchant her eleven brothers -- who are swans all day but turn human at night -- by gathering stinging nettles barehanded from churchyard graves, making them into flax, spinning them and knitting eleven long-sleeved shirts while remaining silent the whole time. If she speaks, they'll remain birds forever. In her silence, she cannot protest the crimes she accused of and nearly burned as a witch.

"Hauled off to a pyre as she knits the last of the shirts, she is rescued by the swans, who fly in at the last moment. As they swoop down, she throws the nettle shirts over them so that they turn into men again, all but the youngest brother, whose shirt is missing a sleeve so that he's left with one arm and one wing, eternally a swan-man. Why shirts made of graveyard nettles by bleeding fingers and silence should disenchant men turned into birds by their step-mother is a  question the story doesn't need to answer. It just needs to give us compelling images of exile, loneliness, affection, and metamorphosis -- and of a heroine who nearly dies of being unable to tell her own story." 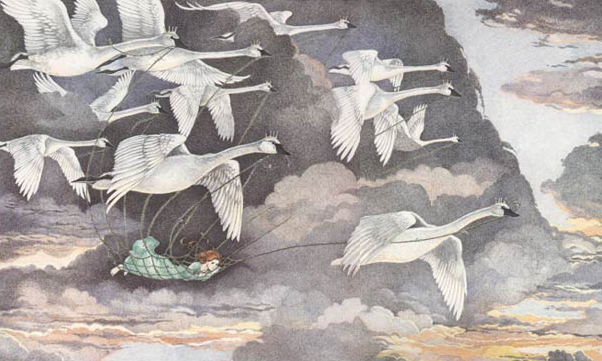 From my essay "Transformations" (published in Mirror, Mirror on the Wall):

"Silence is another element we find in classic fairy tales — girls muted by magic or sworn to silence in order to break enchantment. In 'The Wild Swans,'   a princess is imprisoned by her stepmother, rolled in filth, then banished from home (as her older brothers had been before her). She goes in search of her missing brothers, discovers that they've been turned into swans, whereupon the young girl vows to find a way to break the spell. A mysterious woman comes to her in a dream and tells her what to do: 'Pick the nettles that grow in graveyards, crush and spin them into thread, then weave them into coats and throw 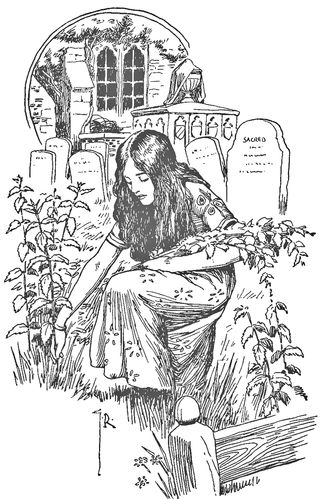 them over your brothers' backs.' The nettles burn and blister, yet she never falters: picking, spinning, weaving, working with wounded, crippled hands, determined to save her brothers. All this time she's silent. 'You must not speak,' the dream woman has warned, 'for a single world will be like a knife plunged into your brothers' hearts.'

"You must not speak. That's what my stepfather said: don't speak, don't cry, don't tell. That's what my mother said as well, as we sat in hospital waiting rooms -- and I obeyed, as did my brothers. We sat as still and silent as stone while my mother spun false tales to explain each break and bruise and burn. Our family moved just often enough that her stories were fresh and plausible; each new doctor believed her, and chided us children to be more careful. I never contradicted those tales. I wouldn't have dared, or wanted to. They'd send me into foster care. They'd send my young brothers away. And so we sat, and the unspoken truth was as sharp as the point of a knife." 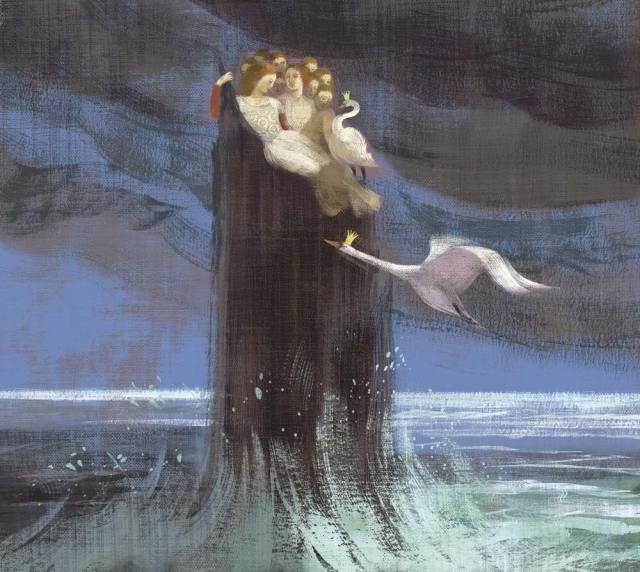 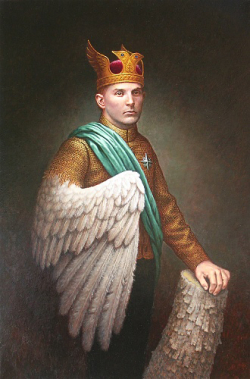 Youngest Brother, swan's wing,
where one arm should be, yours the shirt
of nettles short a sleeve
and me with no time left to finish --
I didn't mend you all the way back into man
though I managed for your brothers;
they flit again from court to playing-courts
to courting, while you station yourself,
wing folded from sight, avian eye
to the outside, no rebuke meant but love's.
Was it better then, the living on the water,
the taking to air...?

- Debora Gregor (from "Ever After," published in The Poets' Grimm) 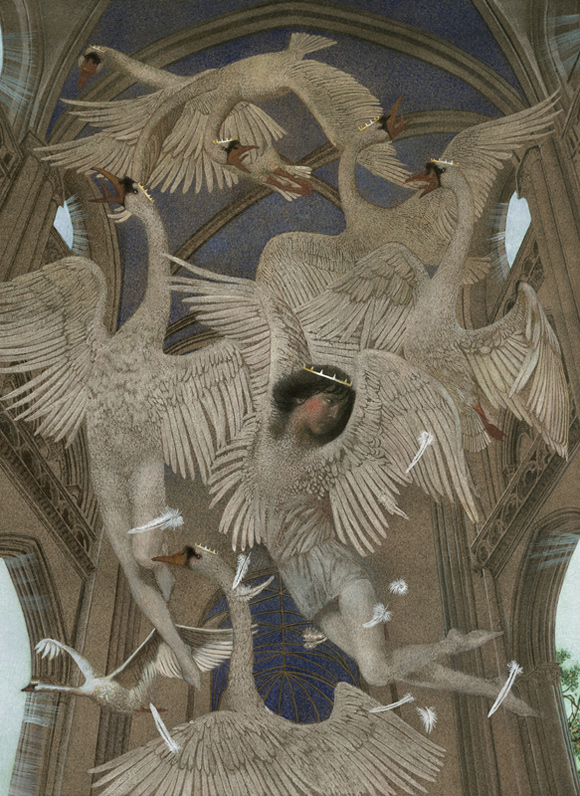 “There are ways of being abandoned even when your parents are right there.”   - Louise Erdrich (from The Plague of Doves) 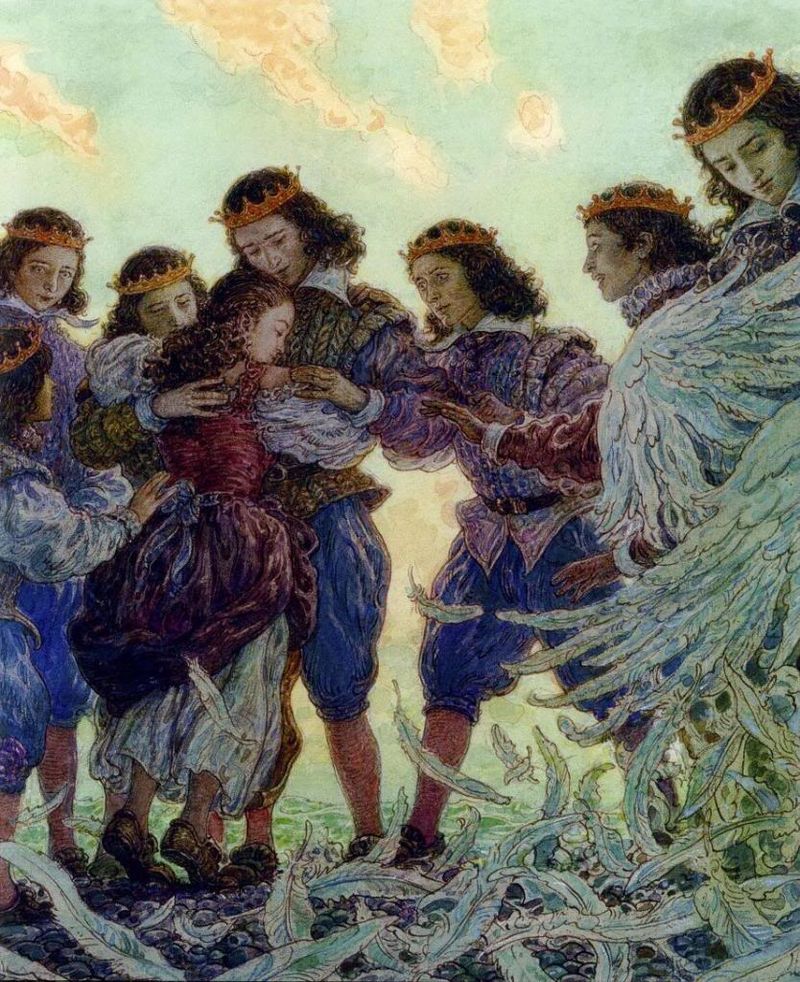 in Birds, Fairy tales, Into the Woods series | Permalink | Comments (19)

Powerful stuff: fairy tales!
I used the reading of them as a journey from child to adulthood with my class (last year). We looked at them as a way of learning to deal with changes and how to cope with them.
I think they offer levels and levels for both adults and children to take a mantle of power in place of the helplessness they often feel.

I would be interested to know what you think of the other archetype: the fool?

Wonderful. Especially about the role of silence.
Have you come across Rafe Martin's book "Birdwing" ? It continues the story of the youngest brother, the one who has one swan-wing-arm. It is a wonderful book, exploring his choices as he is caught between the human and the animal worlds -- and also how he felt about his sister.

This is an old poem of mine, but seems appropriate to the day:

Swan/Princess
1.
When the change came
she was sitting in the garden
embroidering an altar cloth,
thin gold thread working the crown of Christ.
First her neck
arching like cathedral vaultings.
Dress ripping at the shoulders accommodated wings:
white-vaned, white-feathered like Oriental smocking.
Hands and feet tangling into orange legs,
inelegant, powerful as camshafts.
When her head went, she cried,
not for pain, but for the loss
of her soft, thin lips
so recently kissed by the prince.
Not even the sweet air,
not even earth unfolding beneath her
recompensed for those lost kisses
or the comfort of his human arms.

2.
When the change came
she was floating in the millpond,
foam like white lace tracing her wake.
First her neck shrinking,
candle to candleholder,
the color of old, used wax.
Wings collapsing like fans;
one feather left,
floating memory on the churning water.
Powerful legs devolving;
powerful beak dissolving.
She would have cried for the pain of it
had not remembrance of sky sustained her.
A startled look on the miller’s face
as she rose naked and dripping,
recalled her to laughter,
the only thing she had really missed as a swan.

Argh, I'm quoting from that in tomorrow's post! Ah well. Folks can read it twice!

Or you could simply delete it. (That's what I get for being helpful!)

Oh, this one is powerful, Jane!!

The Wild Swans is still one of my favorite fairy tales. Lovely post Terri. It made me go back and look at a poem I wrote about this story 13 years ago -- How time flies!

And if you don't mind, an old one of mine too, from the Fall 2009 issue of Goblin Fruit:

My Bed, Made Up with Down Pillows
by Virginia M. Mohlere

I sleep on my brothers
every night --
fluff them high,
sweet-smelling
tight-woven cotton under linen
to keep the bars from jabbing.

Oh, years of nettles,
and now everything around me is soft.
The task failed,
the word spoken:
my prince said,
"Will you have me?"
And I said,
"Yes."

My brothers' meat fed my wedding feast,
and the rustle of feathers when I roll over in bed
is the only voice
they have left.
Every day I sing.

It's way too beautiful to delete, and will whet readers' appetite for tomorrow.... xoxo

There's something very magical, and I mean that in an 'ancient/beyond understanding' way, about transformation and swans. This story, as well as the story of the Children of Lir, and Leda and the Swan, mix and meld together in my imagination, and seem to stir a deep sense of...well, I can't really describe what...just something very powerful! It was this story that inspired my 'Tale of the Seven Bird Spirits". It was the first wood Talesingr piece I made, and the first Talesingr story (though not the first one I was brave enough to post!), and both seemed to come through from somewhere else!

And Jane and Virginia, those two poems are wonderful!

This post is so beautiful! Whenever I come here, I acquire a feeling of awe; partly because of the pictures and text, but more so from the depths of life and storytelling that they evoke.

Thank you so much, Anna.

Have you ever heard Patrick Cassidy's symphonic piece, The Children of Lir (http://www.allmusic.com/album/the-children-of-lir-mw0000125950)? It's lovely.

Two Wild Swans are better than none.