A Skulk of Foxes
The Dog's Tale

A Mischief of Mice 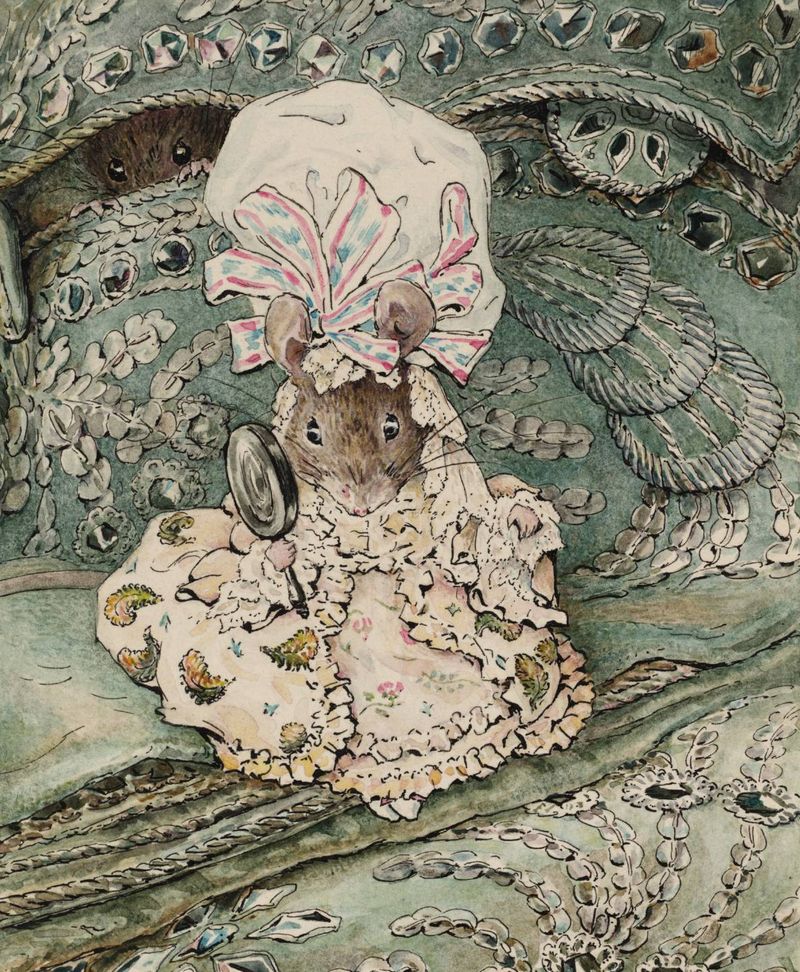 "The mouse ne'er shunn'd the cat as they did budge
From rascals worse than they."  - William Shakespeare (Coriolanus) 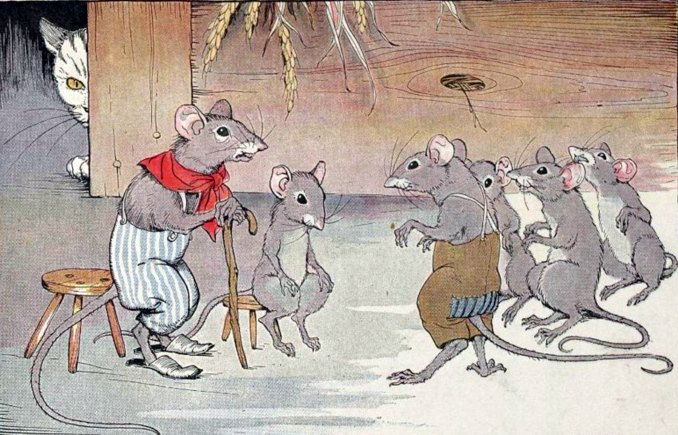 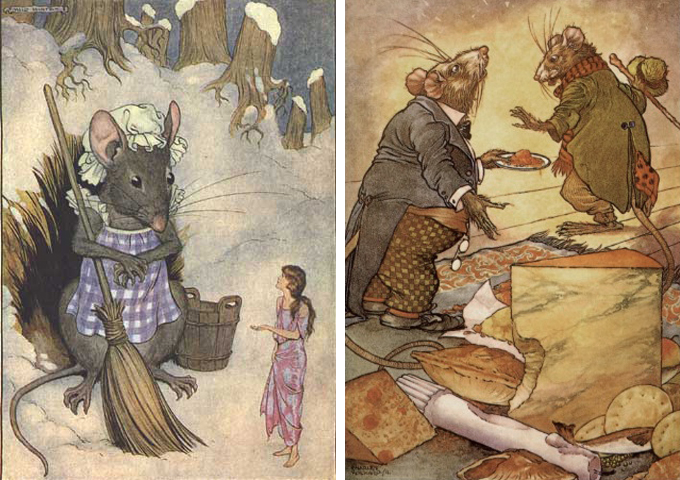 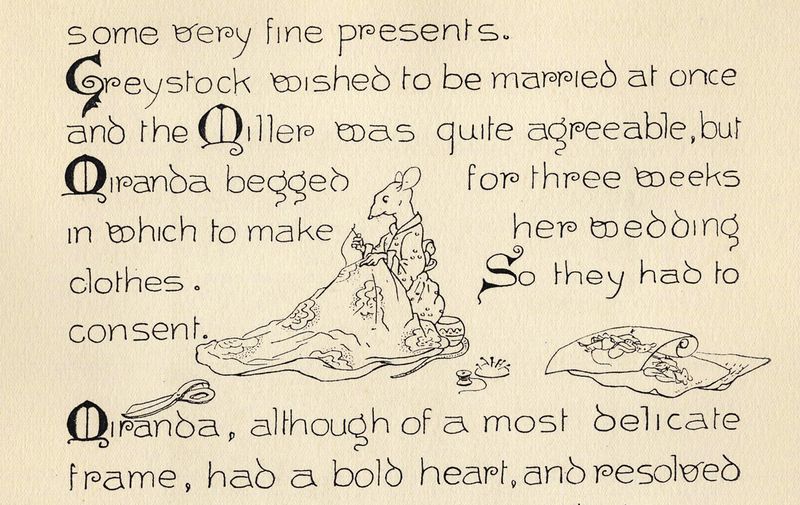 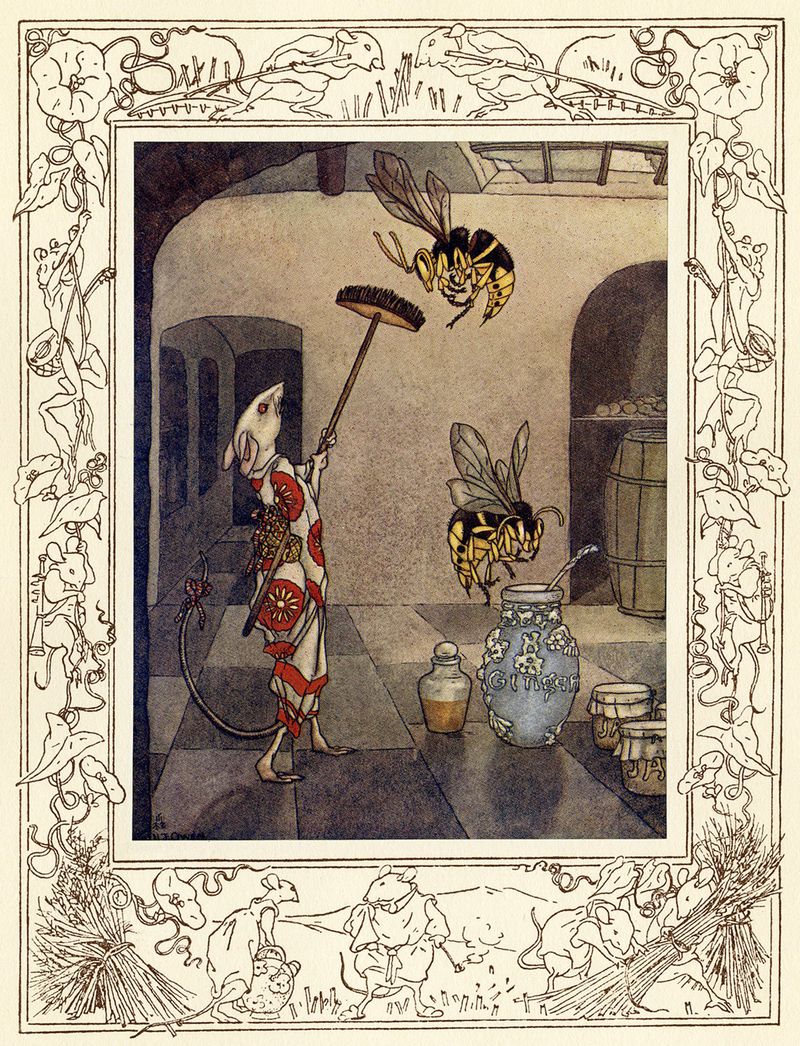 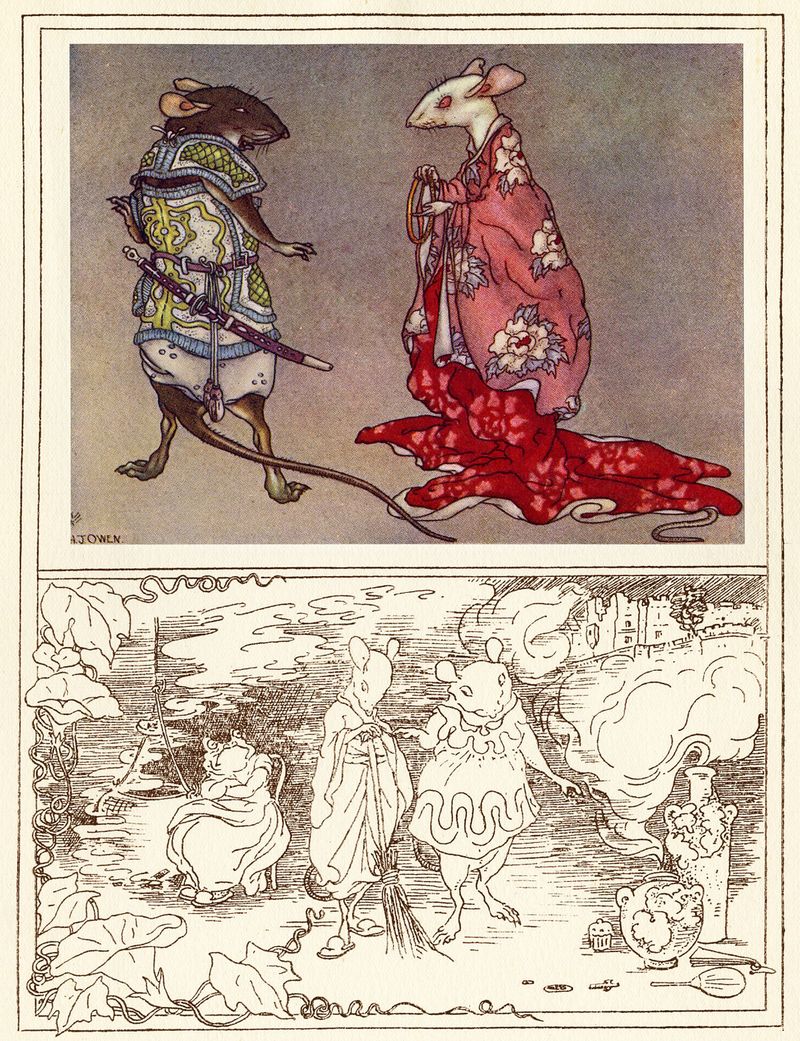 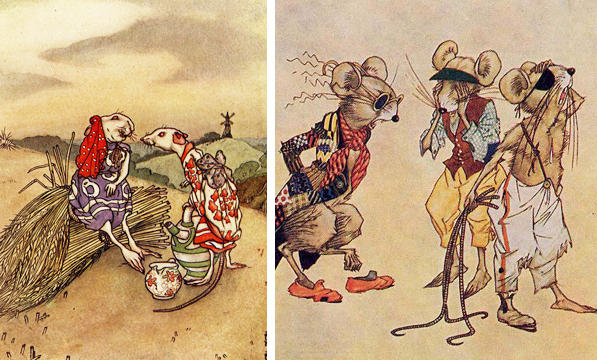 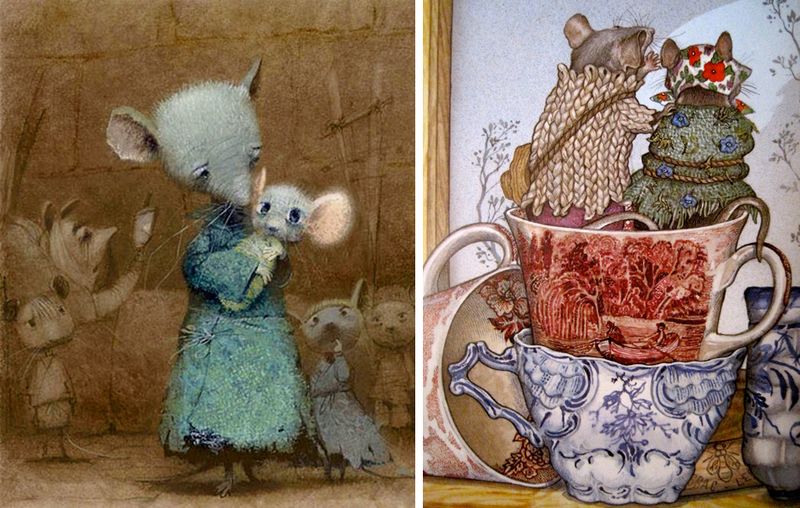 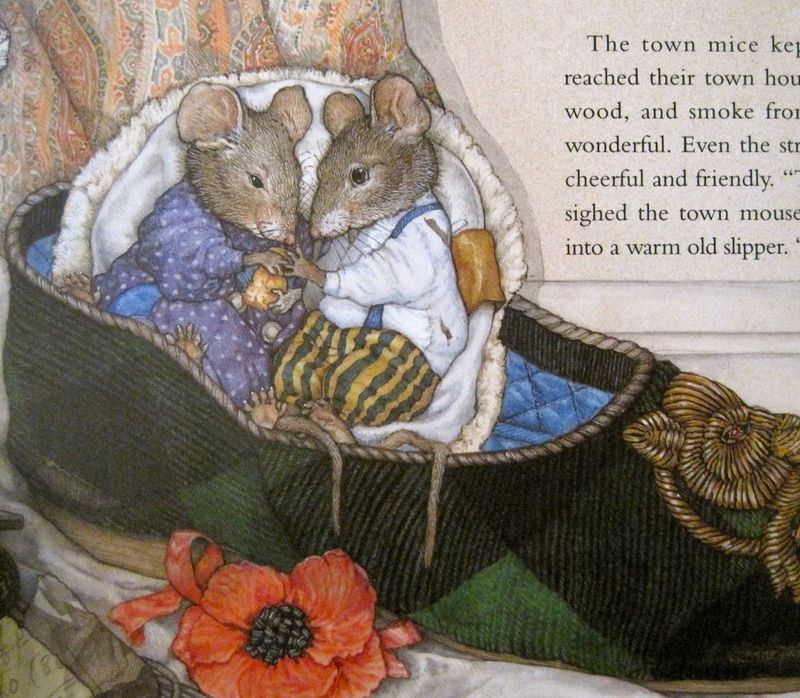 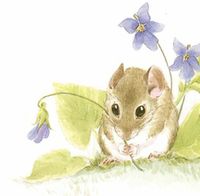 Where has he gone, my meadow mouse,
My thumb of a child that nuzzled in my palm? --
To run under the hawk's wing,
Under the eye of the great owl watching from the elm-tree,
To live by courtesy of the shrike, the snake, the tom-cat.

- Theodore Roethke (from "The Meadow Mouse") 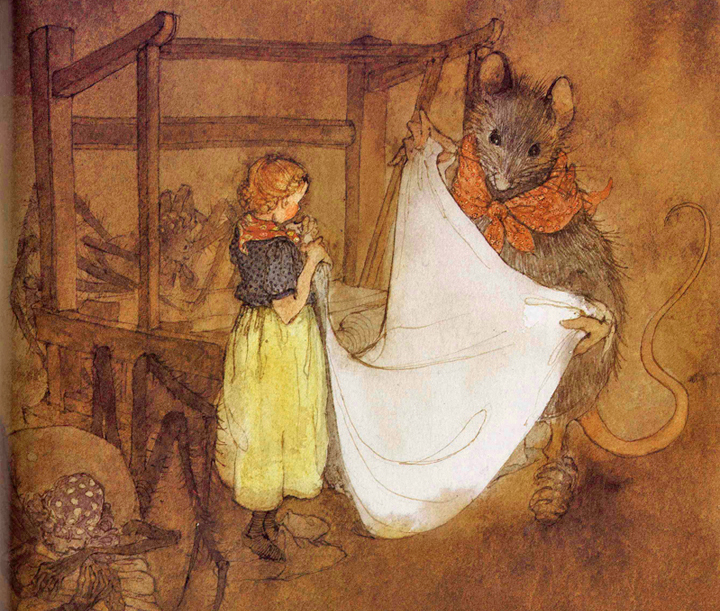 Washed in the River 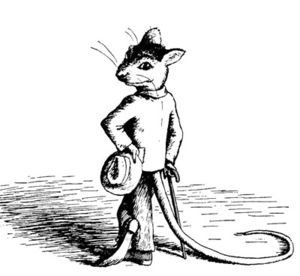 Of course the woman with the mouse-child was famous,
as grace is famous
a rarity
at the end of suffering. She kept him in
a nest in the dry bathtub
and washed in the river.

And though only children were meant
to believe this, I still believe this.
The fate of the body
is to confound

itself with everything. That's why in another tale, the fair sister
opened her mouth and spoke
rubies

and the plain sister, vipers and toads.
Meanwhile the mother

of the gray thing
bathed him in a teacup.
Plucked him out and let him
run along the shore

The second you see yourself in the suffering
the story's over. 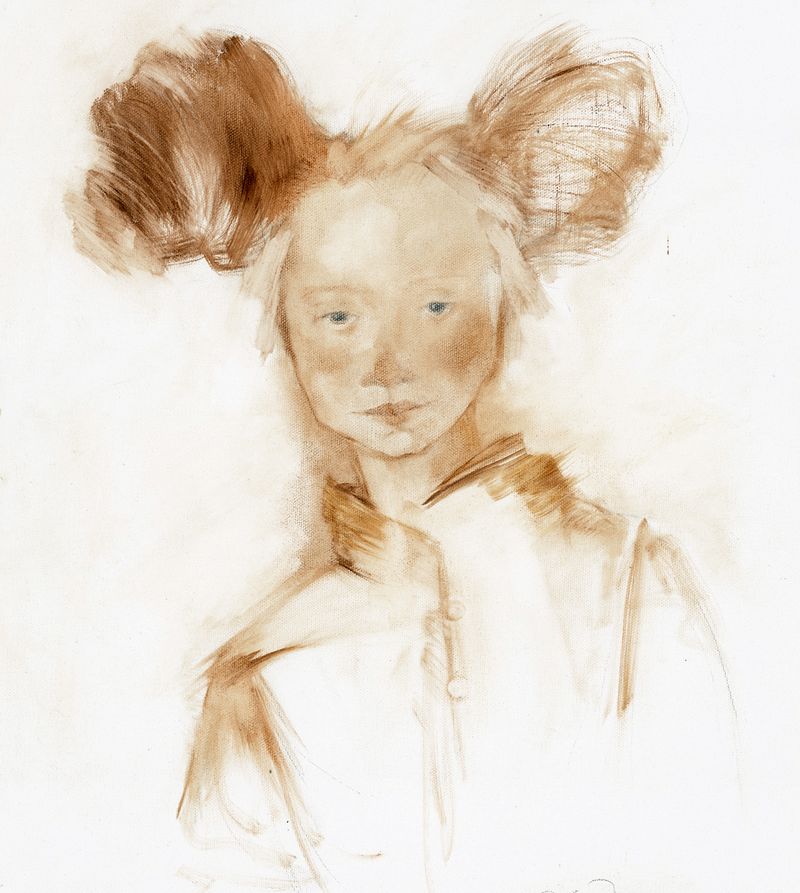 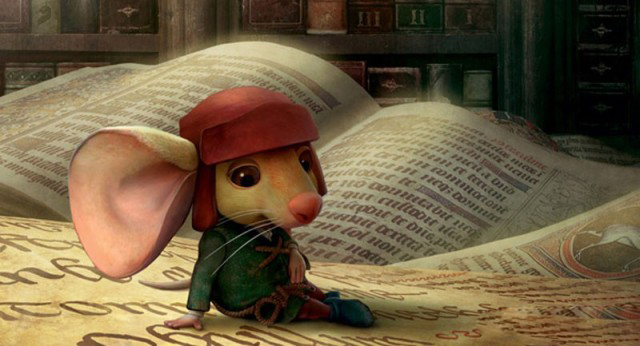 The art above: Five illustrations by Beatrix Potter (from The Tailor of Gloucester and Two Bad Mice); "The Cat and the Mouse" by Johnny B. Gruelle; "Belling the Cat" and "Thumbelina" by Milo Winter -- the latter picture paired with "CIty Mouse, Country Mouse" by Charles Folkard; an illustration from the Brambly Hedge series by Jill Barklem; a decoration and two full-page illustrations from "The Robber Bridgegroom"  (a Grimms fairy tale delightfully but inexplicably illustrated with pictures of mice and frogs in Japanese clothing) by HJ Owen [misprinted on the book's cover as HS Owen], published in 1922; a detail from a "Robber Bridegroom" painting by HJ Owen paired with "Three Blind Mice" by Charles Folkard;  "Three Blind Mice" by Walton Corbould; fairy tale mice by Igor Oleinikov; two illustrations from "Town Mouse Country Mouse" by Jan Brett; "Mousekin" by Edna Miller; a full painting and a small sketch/study for "Thumbelina" by Lisbeth Zwerger; a drawing of E.B. White's "Stuart Little" by Garth Williams; a mouse drawing by H.S. Owen; a painting of mine called "The Mouse Child," and an image from the animated film "The Tale of Desperaux," based on the charming book by Kate DiCamillo. Below is another Brambly Hedge illustration by Jill Barklem.

For a delightful response to Robert Burns' poem "To a Mouse," see "From a Mouse," by the contemporary Scottish poet Liz Lochhead. I've told this (true) story so many times I can't remember exactly who I've told it to; so at the risk of repeating myself I'll offer it here in a reduced form.
Some years ago I was staying overnight with friends. While getting ready for bed, the household's battle-scarred tom cat, who loved people, decided to grace me with his presence and settled down on the counterpane. I tried to make myself comfortable in what little space he'd left me and carried on reading my bedtime book. But, while Caliban - the cat - was performing his pre-sleep wash he suddenly froze and glared across the floor. I followed his line of sight, and there playing on my boots was a tiny white mouse. All of the muscles stood out in relief along the cat's back and I knew he was about to pounce. Quickly I grabbed him, but then as we watched, the mouse visually dwindled away to nothing, just like a fade out shot in a film or TV programme.
Caliban was obviously used to this experience because he simply did what cats do when they shrug, and carried on with his wash.
The next day I mentioned the visitation to my friend; "Oh yes," she said conversationally. "You needn't worry about that, we have a ghost mouse and sometimes he comes out to play at night."
Apparently all of the family had witnessed the ghost mouse and his ability to 'fade out' and they were all deeply fond of him. Some years later when they moved house he even went with them.
Just recently I mentioned the mouse to my friend again and she sadly reported that they hadn't seen him in the last year or so and they'd reluctantly come to the conclusion that he'd 'moved on'.
The sceptics among you can make of it what you will. I only offer what I saw and what my friend and her family believe.

From skulk to mischief, you never cease to amaze me..The video is chilling...chilling. I love your mouse child...I love mice, except in my closets. What a charming story from Stuart. Oh it's a;; wonderful.

P.S. I'm sorry about the last two sentences; they sound far more aggressive than I intended.

I *love* this story.

Aww, thank you, sweetie. I had such a lot of fun picking out the fox and mouse pictures from my art files this week, as I'm so fond of both.

My brother and I used to have various tamed mice and rats as pets when we were kids - just like Beatrix Potter and HER brother did. They are smarter than most people think and can be very affection. The spanish musician and artist Priscilla Hernandez is another rat-lover and her own tame rats appear in this video:

Such a precious post ( as are all your postings ). I could not help but to hum Jethro Tull's gorgeous "One Brown Mouse" as I read your words and delighted myself with your chosen images. Have a listen, if you aren't already familiar with it:
http://www.youtube.com/watch?v=ZSFU8fYkqDg
and do read the lyrics as well:
http://www.songlyrics.com/jethro-tull/one-brown-mouse-lyrics/
thank you so much for all you share with us,
~ gretchen

I wanted to find a video of the Royal Ballet's version of "Two Bad Mice" from the ballet Tales of Beatrix Potter.

This video is blocked in the US, alas, but maybe it will work for those elsewhere?

You have the best stories, Stuart.

Thank you both Terri and Raquel.

I was wondering Terri, are you planning a 'Ghost Post' sometime in the future? With Samhain/Halloween approaching fast it could be most apposite.

The Reserve of Robins

Do not forget there are two robins,
the larger, more modest thrush,
American, brash, abundant, overbearing,
great turd of a flier, waving its red breast
like a banner in the wind. It reserves a virus
under its wings, all the while caroling cheerily.

The European robin hides in hedgerows,
modest as a nun, who nevertheless sings
full-throated and cheeky on Christmas Day.
A passing passerine, it minds its manners,
dresses in grey—-not gray--takes tea at eleven,
and loves the Queen.

How can a mouse be compared to that?

I do believe there could be a ghost white mouse. Kind of makes me wonder what my
Marlowe fiercely stares at when I see nothing.

My odd experience does not include mice but is also puzzling. While visiting a friend I
hadn't seen for a long time, at her rural home in Central Oregon, waiting to meet her
husband, I heard a car door slam. "Oh he's here," I guessed. "No, not yet. It's the ghost."
Oh sure. I looked into the garage and then up and down the dirt road and everywhere.

Nothing but my friend's car. No-one, anywhere. Just the expanse of land and distant hills, until the husband arrived, and was told about the ghost. He said, "Yup. We think the former owner just wants to come back home."

Hope this is not a too forward request Jane, but, might I copy it (copyright and all) just to email to a friend who would love it too?

Hello Phyllis. I love these small, inexplicable incidents that just quietly happen. They convince me of the supernatural (or whatever you want to call it) more than anything else.

I'm fascinated by the pictures of mice dressed in Japanese clothing, and by your description:

'The Robber Bridgegroom" (a Grimms fairy tale delightfully but inexplicably illustrated with pictures of mice and frogs in Japanese clothing) by H.S. Owen, published in 1922.'

I'd love to see this book!

I didn't know there are two robins! Wonderful poem.

Yes, with these provisions: l.understand it is not necessarily finished and I am still noodling with it 2. that your friend can't pass it along or post it anywhere without my permission.3. It always needs to be accompanied by the © information. Thanks.

Cynthia--if you ever watch the movie Mary Poppins--in the scene where she is talking and singing with a robin--it's the WRONG robin. There she is in (suppposedly) London and talking to the American robin (thrush) which is twice the size of the cheeky little passerine that is the European robin and looks noting like it. My husband, a birder, rose up in his seat (we were in Wales at the time) and thundered at the screen. All around us people were hooting and throwing small objects at the screen.

It was quite an evening!

Thanks. I have a few more odd experiences to save if there's a ghost theme sometime.

i pondered, wondering if I should stick up for mice, but it is, oh heck, adorable to
imagine British robins on Christmas day, and who love the Queen. So looking forward
to ordering and so I can reread poems in your collection. A poem is something one must read and read again.

I laughed out loud. Mary Poppins, the movie has so many flaws. Wish I'd been there to see
the commotion.

Great Poem; but all the robins in my garden are republican and keep pictures of Oliver Cromwell on their walls.

All I have is city pigeons and I think they're all Anarchist flash dancers.

My favorite Oliver Cromwell quote is: “Work hard, trust in God, and keep your bowels open.” Somehow, doesn't sound like a robin to me!

No, perhaps it doesn't sound like robins; but maybe it applies to Phyllis's anarchist pigeons, especially if they're as incontinent as the British ones.