The whole thing starts with a single knot
Gathering the Worlds 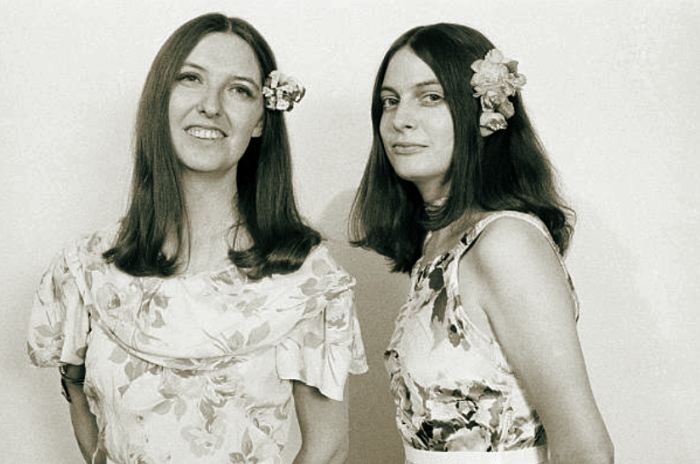 This week, four songs about work and working people from June Tabor (one of the great solo folk singers of the British Isles) and Maddy Prior (lead singer for the ground-breaking band Steeleye Span), who released two brilliant albums together, back in the day, under the name Silly Sisters. In the videos here, they've reunited for Maddy Prior's 2008 concert at Cecil Sharp House in London.

Above: "The Four Loom Weaver."

According to Mainly Norfolk (which is a very good folk music reference site, by the way), this is "a ballad about the economic crisis of 1819-20 where many handloom weavers lost their work due to the rise of steam driven weaving machines. Ewan MacColl learned this song from Mrs. Whitehead, near Oldham, in Lancashire."

Below: "The Doffing Mistress."

The album notes explain: "The Doffing Mistress oversaw the young factory girls in the spinning sheds as the changed (doffed) the bobbins, ready to be sent to the weavers. The revolution in technology brought with it new songs that reflected a different world from the pastoral songs of an earlier time and have a vibrant energy and positive outlook in this case, that we do not usually associate with factories."

A song that looks at the ways a woman's economic status once depended entirely (except in unusual circumstances) on the kind of marriage she made -- for working class women every bit as much as the gentlewomen whose plight Jane Austen rendered so well. (Alas, the first verse of the song is one that all too many people, men and women alike, can relate to in today's economy.)

Below: "The Grey Funnel Line."

Cyril Tawney, who wrote the song back in 1959, had this to say about it: "This was the last song I wrote before I left the Royal Navy in 1959. ‘The Grey Funnel Line’ is the sailors' nickname for the Royal Navy—just as if it were another mercantile line. It's a straightforward song about a sailor leaving home and the loved one. He's extremely fed up with the Senior Service and he'd rather be outside, but he has to go away yet again. On occasions like this I think the close of the first day out, as the sun is setting, is the time when we're most vulnerable to nostalgia. There's a shanty with the refrain ‘Rock and roll me over for one more day,' and this gave me the idea for my own refrain ‘It's one more day on The Grey Funnel Line.' "

My apologies for the late post today. It's very stormy this morning, and out here in the countryside that often makes our Internet go wonky. Fingers crossed for better weather as the day and week goes on.

The mill legacy looms (sorry for the pun) large here in the North Midlands up to the North West. The mills here in Nottingham lie silent now, converted into apartment blocks. To get a feel for what they must have been like we have a little industrial museum at Wollaton Hall. They have a number of machines on display.

Here in Rhode Island, US, the town of Pawtucket is often considered the birthplace of the American Industrial Revolution because of the first weaving mill started by Samuel Slater who brought to Pawtucket the model of cotton spinning machines from England in 1793. We had no history of a cottage industry for weaving per se and this area became a major hub for weaving of many types as well as for roping, cording, etc. Slater Mill is now a museum, and there are many pockets of what used to be mill villages around the state. There are plenty of New England working songs that center around the mills.

The cotton mills mostly died out in the 1930's and there is only one factory still in operation making trim. Only a handful of the buildings have been converted for other uses. The unemployment rate here is 9.1% - 3rd highest in country.

Thank you, Terri, for giving us this music today. I admire June Tabor above all other singers. When she sings, my mind falls willingly into the story she tells, and rests there, and is quiet.