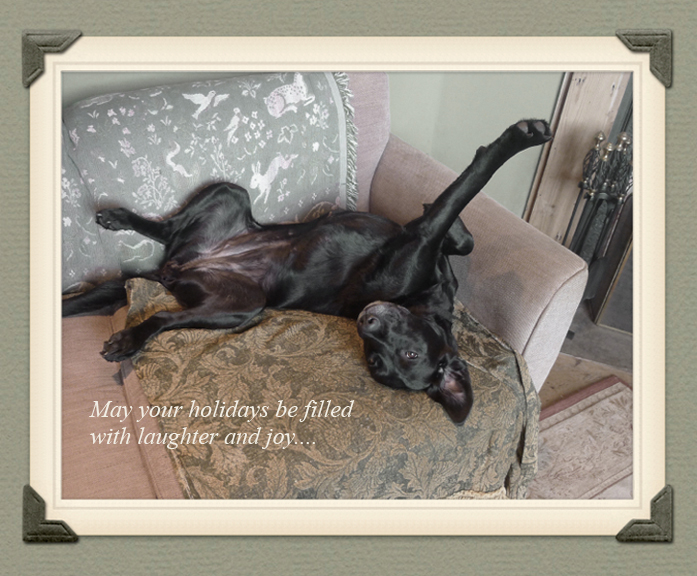 Happy winter holidays, everyone! Tilly and I will be back again on Monday, January 6.

This week, four tunes for the winter holidays....

Above: a traditional English carol, "The Seven Rejoices of Mary," sung by the great Canadian musician and music scholar Loreena McKennitt.  In this video, McKennitt is recording the song's vocal track for her 2008 album,  A Midwinter Night's Dream.

Below, an enchanting version of another traditional English carol, "The Holly and the Ivy." It's sung by Kate Rusby, from South Yorkshire, on her 2008 album, Sweet Bells.

Next, my favorite holiday song:

"The Christians and the Pagans,"  by the American singer/songwriter  Dar Williams.

"Winter Trees," beautifully performed by The Staves, a trio of sisters from Hertfordshire.

On the cusp of winter solstice... 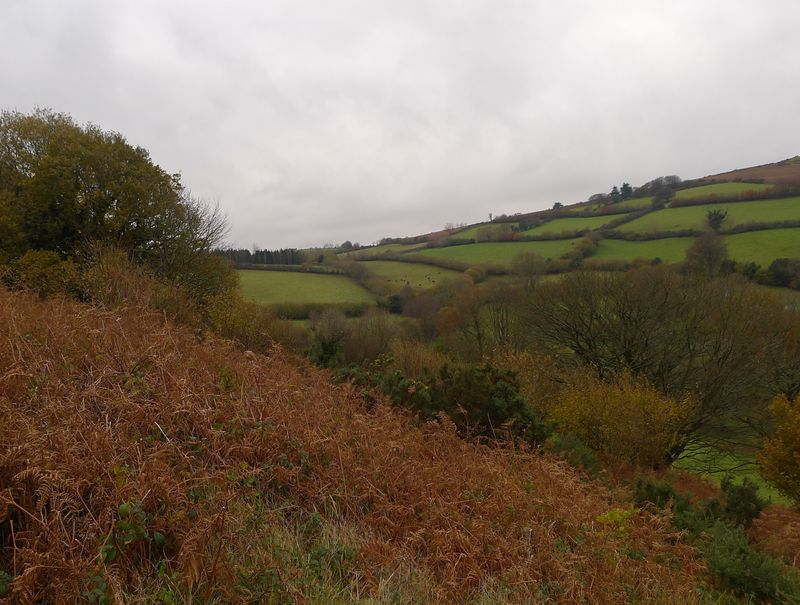 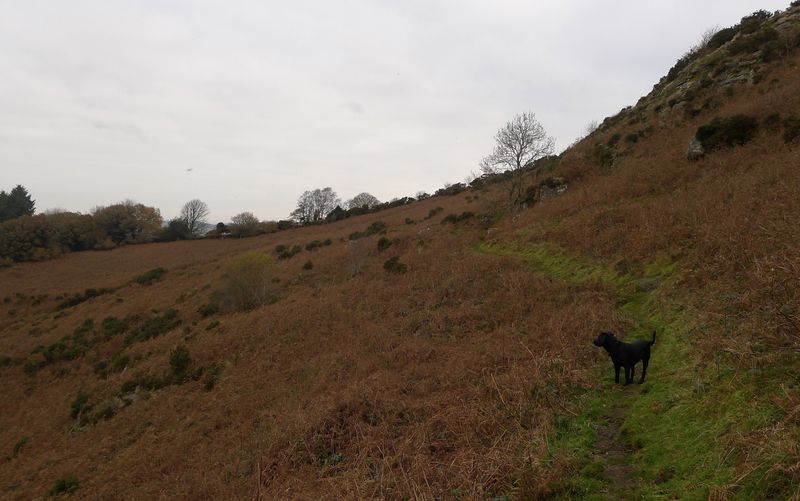 walking, hearing
the same tune no matter where
you find yourself—
inside the dome of dark
or under the cracking white
of the moon's gaze in a valley of snow.
Tonight as it gets cold
tell yourself
what you know which is nothing
but the tune your bones play
as you keep going. And you will be able
for once to lie down under the small fire
of winter stars.
And if it happens that you cannot
go on or turn back
and you find yourself
where you will be at the end,
tell yourself
in that final flowing of cold through your limbs
that you love what you are. 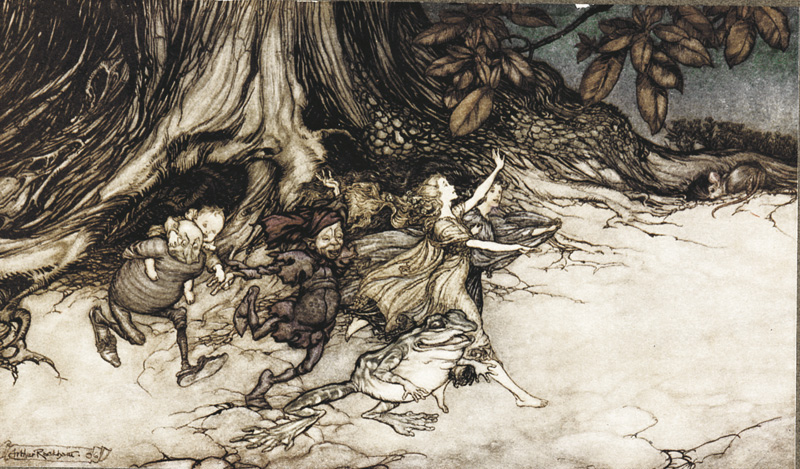 With thanks to Ellen Kushner for introducting me to this poem. I love Strand's work, but this one was new to me. The illustrations above, of course, are by the great Arthur Rackham. In the photographs, Tilly "goes on walking, hearing the same tune" on dark, damp Dartmoor day...

"On a Dartmoor Day" by our friend Chris Back. 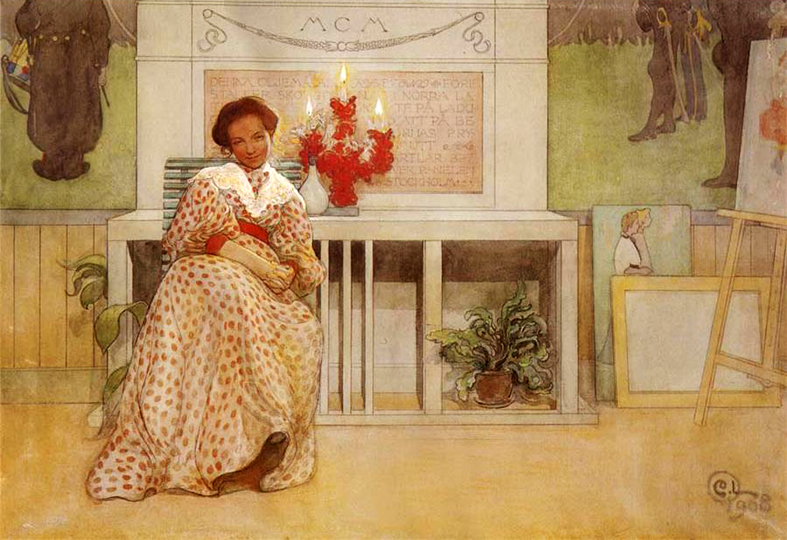 The imagination of the Earth,
That knew early the patience
To harness the mind of time,
Waited for the seas to warm,
Ready to welcome the emergence
Of things dreaming of voyaging
Among the stillness of land.

And how light knew to nurse
The growth until the face of the Earth
Brightened beneath a vision of color...

Let us ask forgiveness of the Earth
For all our sins against her:
For our violence and poisonings
Of her beauty.

Let us remember within us
The ancient clay,
Holding the memory of seasons,
The passion of the wind, 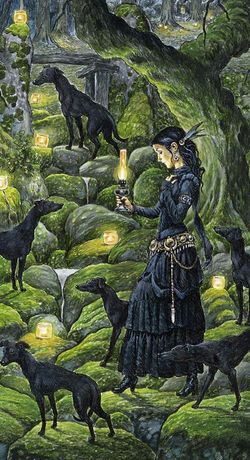 The fluency of water,
The warmth of fire,
The quiver-touch of the sun
And shadowed sureness of the moon.

That we may awaken,
To live to the full
The dream of the Earth
Who chose us to emerge
And incarnate its hidden night
In mind, spirit, and light.

- John O'Donohue (from "Let Us Praise this Earth")

"It could be said that this is a hellish moment on earth environmentally, but I don't choose to see it that way. We are definitely disconnected. We know the litany of horrors: the degredation of resources, the level of consumption...I could go on and on. My grandfather would always say, 'I'm as low as a snake's belly.' So what do we do to pick ourselves up from the realities of the world we live in? I believe it is through art we can find our lifeline."  - Terry Tempest Williams (from A Voice in the Wilderness) With thanks to Michelle, who provided the title for this post in her comment yesterday. The first and last paintings above are by Carl Larsson (Swedish, 853-1919), illustrating the annual Saint Lucia day celebrations in his family. The second painting is a detail from "Out Popped the Moon" by Kay Nielsen (Danish, 1886-1957), and the third is a detail from "Marianna and the Whippets" by my friend and village neighbor David Wyatt. 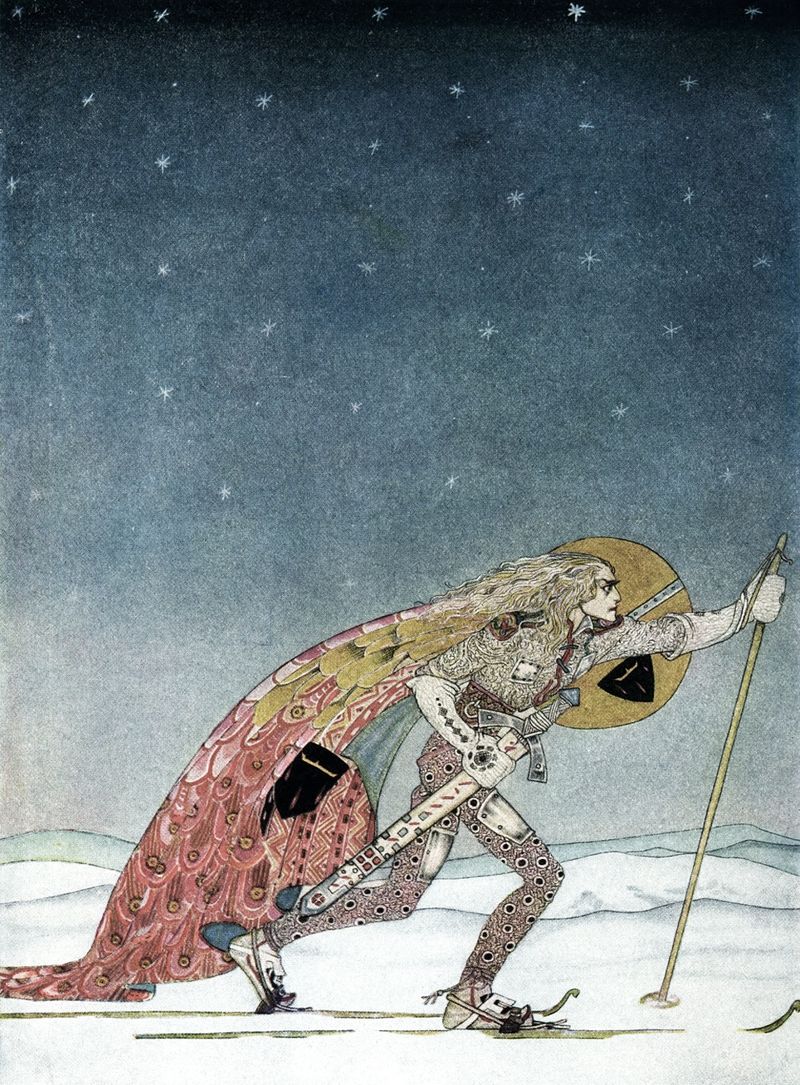 "If you could do it, I suppose, it would be a good idea to live your life in a straight line -- starting, say, in the Dark Wood of Error, and proceeding by

logical steps through Hell and Purgatory and into Heaven. Or you could take the King's Highway past the appropriately named dangers, toils, and snares, and finally cross the River of Death and enter the Celestial City. But that is not the way I have done it, so far. I am a pilgrim, but my pilgrimage has been wandering and unmarked. Often what has looked like a straight line to me has been a circling or a doubling back. I have been in the Dark Wood of Error any number of times. I have known something of Hell, Purgatory, and Heaven, but not always in that order. The names of many snares and dangers have been made known to me, but I have seen them only in looking back. Often I have not known where I was going until I was already there. I have had my share of desires and goals, but my life has come to me or I have gone to it mainly by way of mistakes and surprises. Often I have received better than I deserved. Often my fairest hopes have rested on bad mistakes. I am an ignorant pilgrim, crossing a dark valley. And yet for a long time, looking back, I have been unable to shake off the feeling that I have been led -- make of that what you will."
- Wendell Berry (Jayber Crow)

"What does it mean to stand inside darkness? What does it mean to allow yourself to travel through Hell? You don't see anything for a good long while, but then your eyes adjust and different senses take over. It is a shot through the dark. Have the courage to stay with it, to stay in it. It has its own beauty. I was raised that the goal is to be happy. I don't believe that. I think the question is not 'how do we be happy?' but 'how to we embrace change?' To me, part of that transformation takes place in the dark."  - Terry Tempest Williams (A Voice in the Wilderness) 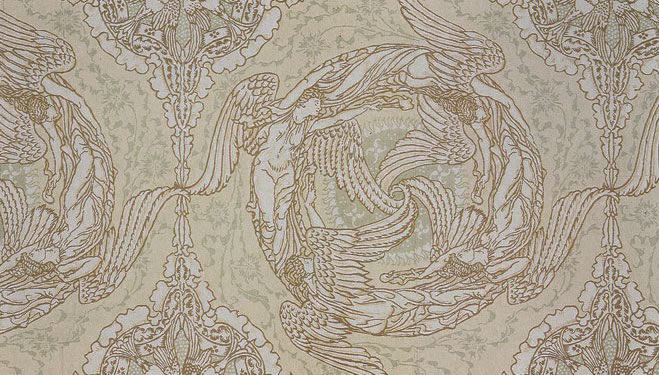 The paintings above are by Danish illustrator Kay Nielsen (1886-1957). To see more of his work, and to learn more about his remarkable life, go here. The last piece is a textile design by the English illustrator Walter Crane (1845-1915).