The talismans I hold...
Notes from the desert, Thursday:

Notes from the desert, Wednesday:

Javelina seem to be the patron animals here at Endicott West this week, as they've been coming around quite regularly -- particularly out at the Bunk House, where I'm sleeping, where they snuffle around both day and night and prowl right through my dreams. 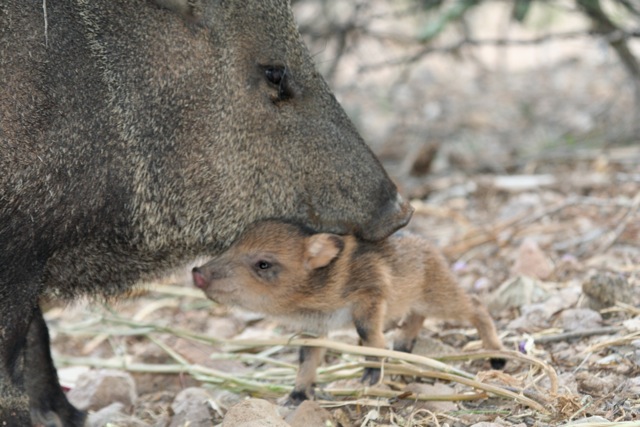 During one of the times when Howard was here in Tucson he remarked that javelina, despite their bristly bulk, looked to him like ballet dancers en pointe as they crossed the desert on oddly daintly little feet. This sparked the following little drawing by me, followed by a charming poetic ditty by Howard, from which these words are drawn.... 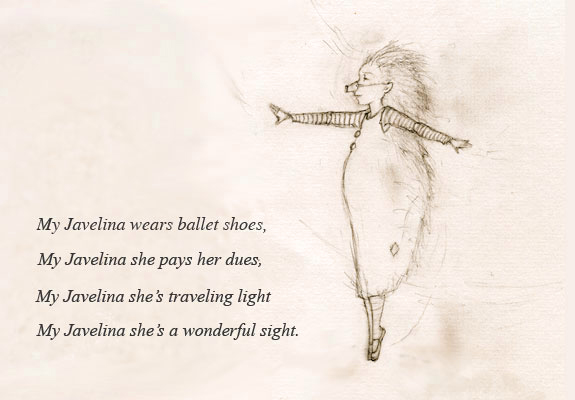 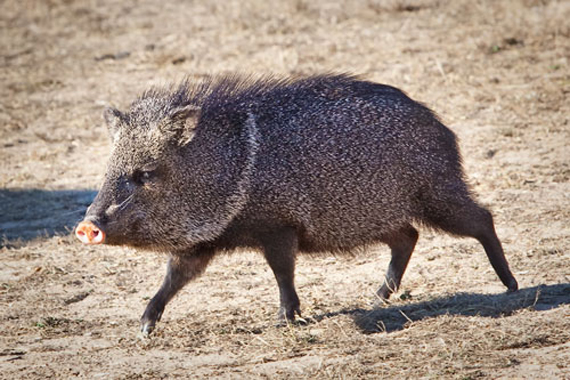 Since the local javelina herd has an uncanny knack of appearing only when my camera is not nearby, the photographs above come from the Tucson Weekly site (photographers uncredited).

in Animals, From my sketchbooks, Leaving Endicott West, Life in the Arizona desert | Permalink | Comments (8)

Good morning Terri. I pulled up a story I once wrote on javelinas and attached the text in this message in case your followers might be interested in learning a little more about these interesting creatures. Feel free to cut it.

Tenacious, adaptable, social, protective and hardy – at first glance the bristly collared peccary seems at ease in the harsh environs of the Sonoran Desert. But fortune failed to smile on these oddly charming, hairy, tusked, beady-eyed beasts. Collared peccaries, better known as javelinas, have been the brunt of a multitude of myths and misconceptions over the years. In the 1680s, E. Tyson wrote that wounded “Mexican musk hogs” rally the assistance of other herd members to revenge the injury. Tyson also reported that they hunt “…poysonous Serpents, and Toads; and having caught them, holding them with their fore feet, with a great deal of dexterity, with their teeth they strip the skin from the head to the Tayle, then greedily devour them.”
Creative tales like these makes modern naturalists shudder at the misunderstanding of this passive vegetarian.
Known to scientists as Tayassu tajacu, javalinas were first documented in the southern United States in the early 1800s by fur trappers traveling west. Due to the absence of javelina evidence in the Southwest at prehistoric excavations, scientists speculate that the animals migrated up from Mexico into what is now Arizona, New Mexico and Texas in the mid-1700s.
Fossil records indicate that prehistoric peccaries roamed the Central and Southern Americas during the Pleistocene era but only three species thrive today – the collared, white-lipped and Chacoan. And of those, only the collared peccary has the adaptability to thrive in diverse habitats ranging from tropical rainforests to dry deserts.
“The only other mammal of the Americas with a greater north to south distribution is the mountain lion,” said Tice Supplee, Chief of Game Management at the Arizona Department of Game and Fish.
In the last hundred years, javelinas have spread up along desert mountain ranges and a herd has even been transplanted as far north as Peach Springs on the Hualapai Reservation. Javalina can be commonly found in desert scrub along creeks, arroyos and a the canyon mouths of mountain ranges. Although their habitats vary greatly, the greatest concentration of herds live between 2,000 and 6,500 feet. Because they are sensitive to heat and cold, javelinas are nocturnal in the summer, holing up during the day and foraging at night. In the winter they reverse the process.
In 1956, J.B. Elder described the behavior of a herd of 17 collared peccaries at a watering tank in the Tucson Mountains: “The sight and sound of javelina drinking, gnawing salt, rooting and crunching, and rubbing against trees reminded me of domestic hogs in a barnyard.”
But although javalinas faintly resemble domestic swine, in actuality they are quite different. Adults sport a jaunty salt and pepper coat with a dark mane of bristles, which rise when the animals are startled, giving them a larger appearance than their standard height of 19 inches and 60 pound frame. Quite social by nature, average herds of eight to ten members band together in a protective community that travels together for years. Females bear litters once to twice a year, with the most births occurring between the months of June and August. But unlike their domestic counterparts, javleinas only give birth to one or two young at a time. The babies, born weighing a pound, are reddish-brown in color and nurse for one to two months. At about three months the little ones lose their auburn hues and take on the salt and pepper coats of the adults.
“They are a matriarchal society,” said Supplee. “The females are the lead animals for bedding and feeding and often the young sub-dominant males will nursemaid the young.”
Javelina forage for a variety of food including prickly pear fruit and pads, tuberous roots, fishhook and hedgehog cacti, agave and the seeds of palo verde, jojoba, catclaw and juniper.
“They have some unusual eating habits,” said Supplee. “For instance they will break off prickly pear pads and drag them around to pull off most of the thorns. Then they will tear it up with their canine teeth and eat the pulpy interior.”
Peccaries live for five to eight years in the wild and up to 15 to 20 years in captivity. Although the young are often victims to bobcats, great horned owls and coyotes, the adults only have to contend with the predation of black bear, mountain lions and humans.
“That’s about all that can take them down,” said Supplee. “If they feel threatened, they will defend themselves with their canines with the adults facing outward on the perimeter with the young in the center.”
Despite their wicked appearance when roused, javelinas rarely attack, and will only do so if cornered or provoked. Which is something to keep in mind as southwestern cities continue to encroach upon desert habitat and people and javelinas are encountering each other more often.
“They like bulbs, so if you plant tulips you’re bound to find pigs in your yard,” warns Supplee with a smile. “They are a unique suburban animal.”

That line about encroaching on the habitat of others reminded me of this from Edward Abbey: "If people persist in trespassing upon the grizzlies' territory, we must accept the fact that the grizzlies, from time to time, will harvest a few trespassers.”

Home on a sick/rare snow day...happy to have learned about javelinas today! Thank you!

oh that drawing & verse is a delight Terri and thank you for the story Carina!

I lived in Sedona for many years and we had lots of javelina! This brought me back to those Arizona years. (Love all the javelina creativity going on in here!)

Thanks for the photo,the drawing, the rhyme, the essay. My payment is this poem.

Javelina in the Morning

One pearly morning a javalina,
dancing on its acorn trotters
like Maria Tallchief on a bad day,
joins us at the retreat.
It tiptoes to the nearest prickly pear,
tears off a leaf, drags it behind
till the leaf unthorns itself.
Then it settles in chef-like
to eat its pulpy meal.

There is a lesson here,
though what it is, I do not know,
nature, nurture, the fine sutures
that hold the world together.
Or perhaps just one small pig, a leaf,
the grey pearl of a morning,
the sounds of feasting,
and a poem.

Surely that is prayer enough.

Oh, I love it! Particularly the last lines.

(Though I'm feeling a little grumpty toward the javelina this morning, because they got into the rubbish last night...which I thought I'd tucked away into a safe place, but they're crafty critters.)