The rituals of approach
Myth, nature, and memory: Aleah Sato and Gina Litherland

Symbol, allegory, and dream: the art of Florence Susan Harrison 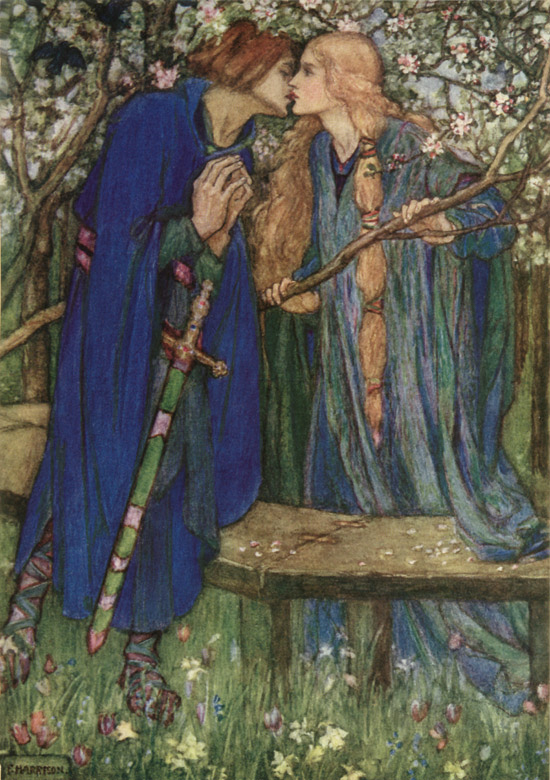 "Fantasy, our subject and my preoccupation, comes from and appeals to the unconcious. It draws all its images from that dark wonderland, through the mysterious catalyst of the creative imagination. Nobody has ever described this process better than the great librarian, Lillian H. Smith, in her book The Unreluctant Years. 'Creative imagination,' she said, 'is more than mere invention. It is that power that creates, out of abstractions, life. It goes to the heart of the unseen, and puts that which is so mysteriously hidden from ordinary mortals into the clear light of their understanding, or at least of their partial understanding. It is more true, perhaps, of writers of fantasy than of any other writers except poets that they struggle with the inexpressible. According to their varying capacities, they are able to evoke ideas and clothe them in symbol, allegory, and dream.' "  - Susan Cooper (Dreams and Wishes) 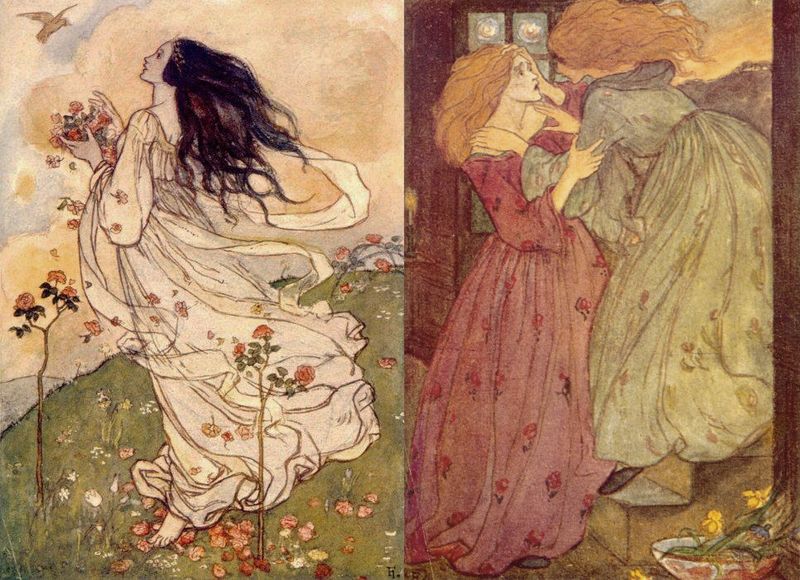 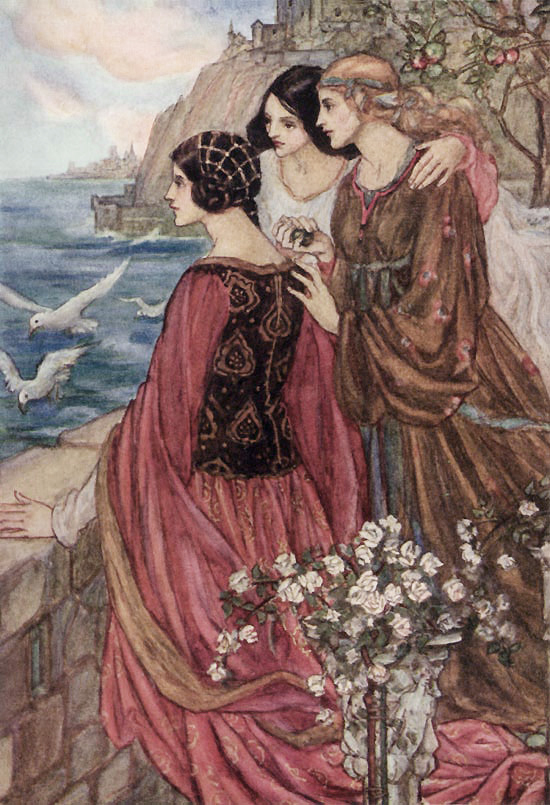 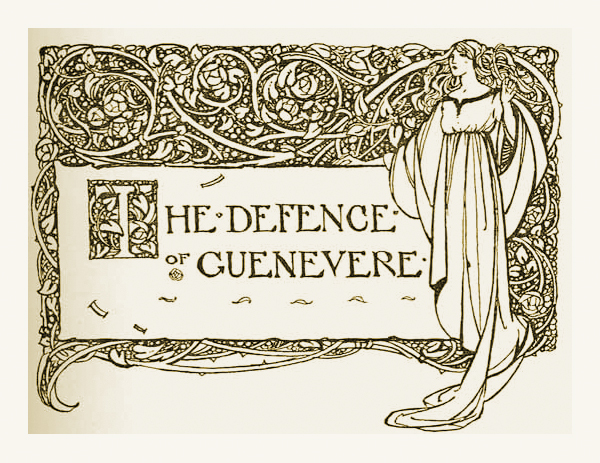 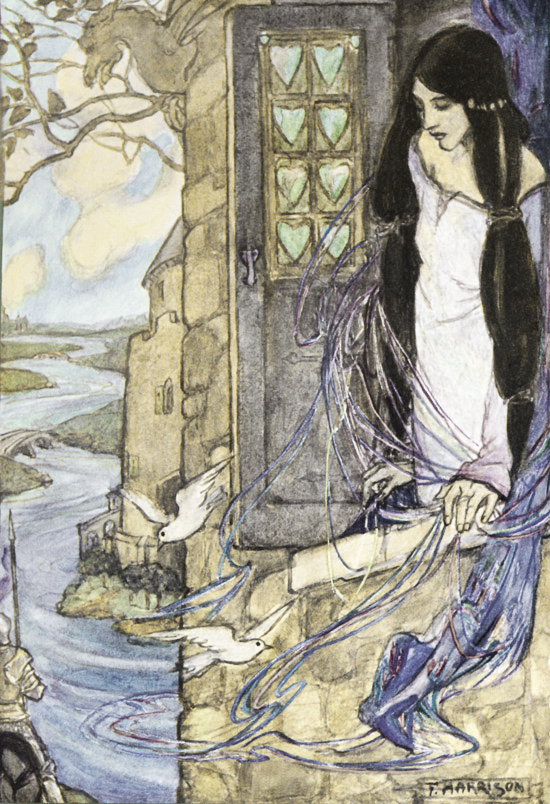 "I always felt and still feel that fairy tales have an emotional truth that is so deep that there are few things that really rival them."  - Alice Hoffman 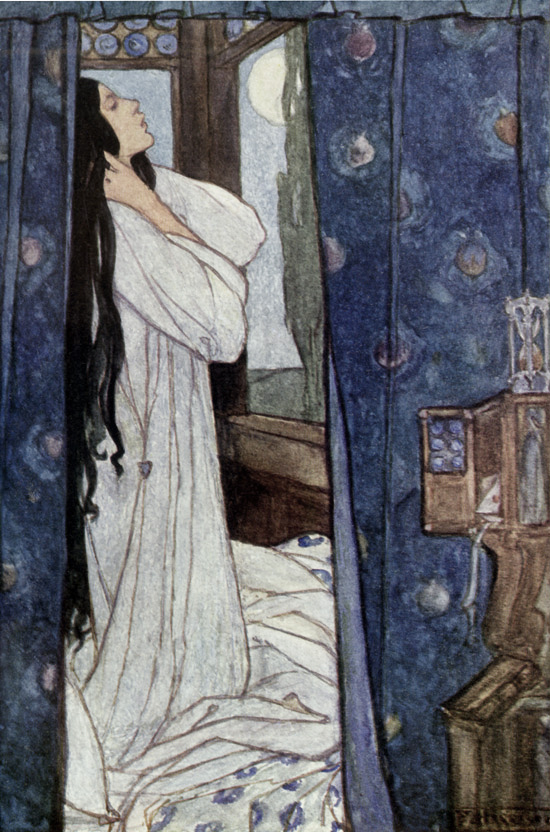 "Fantasy is not antirational, but pararational; not realistic but surrealistic, a heightening of reality. In Freud's terminology, it employs primary not secondary process thinking. It employs archetypes which, as Jung warned us, are dangerous things. Fantasy is nearer to poetry, to mysticism, and to insanity than naturalistic fiction is. It is a wilderness, and those who go there should not feel too safe.” - Ursula K. Le Guin (The Language of the Night) 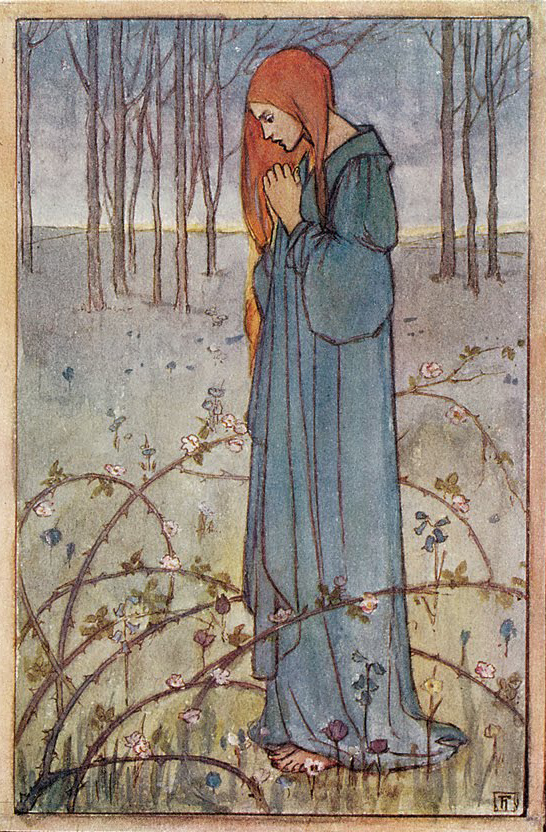 The beautiful artwork in this post is by the Golden Age illustrator Florence Harrison (1878-1955). 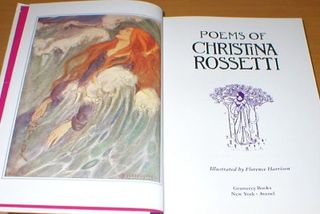 Florence Susan Harrison was born in Brisbane, Australia, but spent much of her childhood at sea (her father was a sea caption) and at a great-aunt's school in England. It's not known where (or if) Harrison formally studied art, but she established a very successful career as an illustrator for the Blackie and Son publishing house (Glasgow and London) from 1905 onward. She is known to have lived in Belgium and London, continually working and publishing throughout the disruptive years of World Wars I and II. (Like so many women of the World War I generation, she never married.) A deep friendship with the Irish Catholic writer Enid Maud Dinnis, whose tales she illustrated, was a formative influence on her life and work; and Harrison stopped publishing artwork altogether after Dinnis' death. 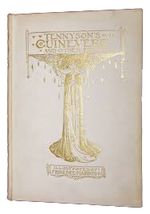 In art catalogs and across the Internet today, Harrison's illustrations are often erroneously attributed to an earlier artist: the Victorian painter Emma Florence Harrison (born in Gloucestershire, England in 1858), whose work was exhibited at the Royal Academy in the late 19th century. I have no idea what Emma Harrison's art was like, as the illustrations widely credited to her now are actually Florence Harrison's. (The confusion stems from Emma Harrison's middle name.) My hope is that a biography of Florence Susan Harrison will be published one day so that we can learn more about this remarkable woman.

To see other works by women artists from the Pre-Raphaelite, Art Nouveau and Golden Age years, I recommend Women Illustrators of the Golden Age by Mary Carolyn Waldrep. 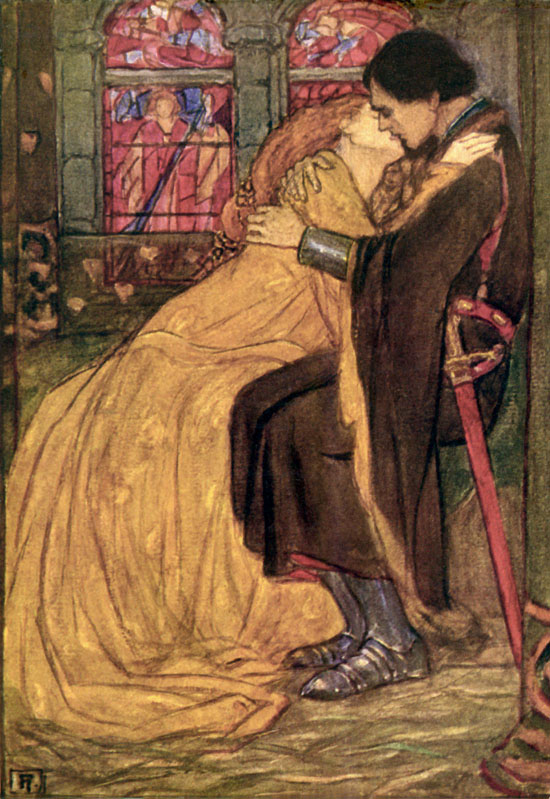 Isn't Fantasy the natural state of the human mind? Doesn't the most seemingly unimaginative individual fill their minds and days with daydreams? Not everyone will clothe their innermost thoughts in magic kingdoms, lost worlds and 'artifacts of power', but I think it's possible to claim that every human animal with a functioning brain will use their imagination to create scenarios and situations that either please them or help them to resolve the most complex of problems and issues.

Fantasy is a product of Abstract Thought, one of the abilities that supposedly sets us apart from the rest of the animal kingdom. But I would go further and say that Fantasy IS Abstract Thought. It is at the core of our being and defines all of us as the entities we are. Therefore Fantasy isn't the exclusive possession of the Arts; at the inception and centre of every scientific/medical/engineering advance and theory sits an individual who was prepared to make the imaginative leap into the realms of true Fantasy where the impossible is made possible. For every Tolkien, Cooper and Bradbury there is an Einstein, Hawking and Darwin.

I believe that those of us who are lucky enough to make a living from Fantasy in its literary/artistic form keep the company of giants. And I also believe those of us who simply live our lives as functioning human beings keep exactly the same company. Fantasy, not death, is the great leveler.

P.S. Once again absolutely superb artwork! I'll definitely be getting the book you recommended.

Wow--though I have seen some of these works before, I never knew either Harrison's names. And must get the Women Artists book. Thanks, Terri. How could I have missed them!

I read the first line of this quote several times, each time reading ""Fantasy, our subject and my preoccupation, comes from and appeals to the "unicorns." Ok, so, its going to be an interesting day!

Valerianna,
I love how some words blink at us with an intention designed especially for us! How lovely to be called by the mist.

It's really only one mythic artist's work that you've missed, and that artist is Florence Susan Harrison.

All that's known about Emma Florence Harrison (the English-born Victorian-era painter) is that she went to art school in London (*not* The Glasgow School of Art, as some sources say) and exhibited work at the Royal Academy between 1887 and 1891.Her work seems to have been based on local scenes, not inspired by Art Nouveau or the Pre-Raphaelites. (Though that, too, is hearsay, as I haven't tracked any down.) After 1891, she pretty much fell off the art world map.

Florence Susan Harrison (the Australian-born Edwardian-era illustrator), on the other hand, *was* inspired by Art Nouveau and the Pre-Raphalites.

At some point the two artists were conflated into one (apparently due entirely to Emma's middle name), and now everywhere you look Florence's work is credited to Emma.

"Isn't Fantasy the natural state of the human mind? Doesn't the most seemingly unimaginative individual fill their minds and days with daydreams?"

You'll get no argument from me. Which is one of the reasons I always find it odd when people are suspicious of, or uncomfortable with, fantasy in the arts.

YOur posts are always beautiful....

And to keep saying that, does not make the most inventive of comments.

What a wonderful post and what striking illustrations. I'm so happy to learn of Florence Harrison. The fall of the fabric, its folds and draping, convey emotions and mysterie.

Valerianna, I love your wondrous unconscious unicorns! My eyes carry out perverse, hilarious, and undoubtedly Freudian permutations daily. Though I did read unconscious here; the unicorns call me elsewhere.

I will walk away treasuring this: "It is a wilderness, and those who go there should not feel too safe.”

I'm so glad you posted this. I was very confused on Florence Harrison and have a Pinterest board dedicated to her, though I did not know if it was Susan or Emma. I kept looking and looking at the work and not seeing significant differences. Lovely thoughts on fantasy, too.

Absolutely! And why is gritty realism in literature, -derived in my opinion from simply observing the woes of the world that surrounds us- considered by many to be superior to a genre that builds worlds, societies and even species from scratch? Perhaps Fantasy and Fairy Tales suffer with the misguided belief that they're in some way comparable to the worst of Hollywood's interpretations.

About "gritty realism" especially the sordid in literature, when I look at the author's picture and past, they seem to live quite pleasant lives in nice houses and with contacts to many options. I have been among many situations that might seem morbid, visits to hosptitals
where they hide the most 'weirdos,' people waiting on hard chairs in a glum room, waiting for their social worker's meeting, the street people in my neighborhood, and some who one might think would not be witty, or kind, or cheerful I find in the darnedest places.

For me, they help me with writing of strangeness overlooked, and that mystery of how
my mind shows me magic and illumination. Will it become art? I never know until it
goes away to strangers I may never know. And some, to my surprise, I do know. But
that's another story.

Ursula Le Guin should get a Nobel Prize. She is an enchanter and so down to earth. She
broke into the stale and refigured it, and we all owe her so much.

Phyllis, I stand corrected. Inspiration comes from many and varied places. And the darkest situation can inspire the most beautiful work.

Well, thank you. I began to think I went a little too far but I do think that fantasy has a
better grip on darkness, that is, some what I call sordid reality leaves no difference.
You're stuck. You lose. Argh! Fantasy contains both light and dark, and so, come to think
if it, some not quite fantasy but whole hearted art is always a good read. I can' t do that.
I'm like my friend Jane D. who saw the elves coming out from under the coffee table.

I agree ... "an enchanter and so down to earth, who broke into the stale and refigured it" And I would be there to add my vote for her Nobel Prize.

Yes, to be called to the mist! However, today was spent doing my taxes, still waiting for the unicorn to show up!!

Thank you so much, Tessa.

Yes, you're not seeing significant differences because *all* the work online is Florence Susan Harrison's. Emma was not an illustrator. But mis-information is hard to stamp out when it's as widely spread as this, alas.

Oh dear, Valerianna, must be something in the air...I read the title as "Symbol, Allergy and Dream" not once, but three times! Though I think your day WILL be much more interesting, unicorns are far more exciting and wonderful than allergies!