The eye and the ear

When the magic isn't working 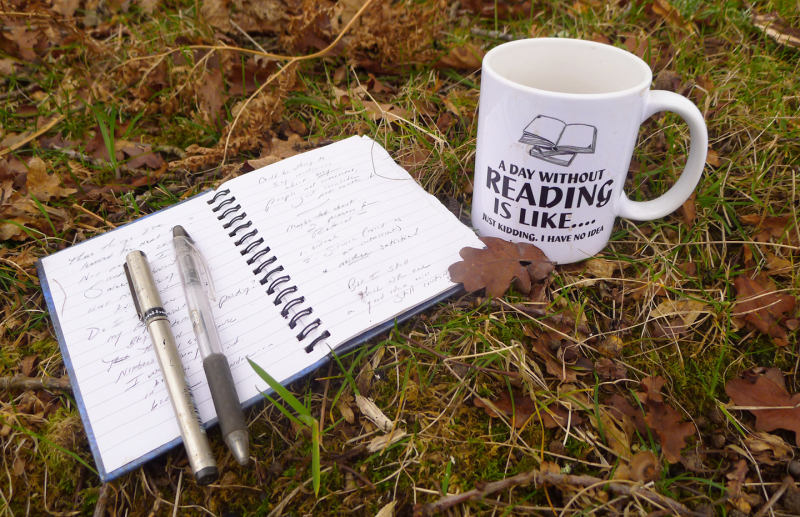 We all have them: the off days, the slow days, the dull days, the befuddled days, the days when nothing goes quite right. The days we forget how to write, how to paint, how to sing or sculpt or design or teach or cook or parent or do much of anything creative at all; when knowledge dries up, inspiration shrivels, and we reach inward but nothing comes out. I'm not having One of Those Days right now, mind you...but I certainly will again, and sooner than I'd like, no doubt. This is part of the creative process, too, and thus deserving of our attention.

In "Why I Write," Francis Spufford describes what a bad work day feels like for him:

"[T]here’s the gluey fumbling of the attempts to gain traction on the empty screen, there’s the misshapen awkwardness of each try at a sentence (as if you’d been equipped with a random set of pieces from different jigsaws). After a time, there’s the tetchy pacing about, the increasingly bilious nibbling, the simultaneous antsiness and flatness as the failure of the day sinks in. After a longer time -- two or three or four or five days of failure -- there’s the deepening sense of being a fraud. Not only can you not write bearably now; you probably never could. Trips to bookshops become orgies of self-reproach and humiliation. Look at everybody else’s fluency. Look at the rivers of adequate prose that flow out of them. It’s obvious that you don’t belong in the company of these real writers, who write so many books, and oh such long ones. Last, there’s the depressive inertia that flows out of sustained failure at the keyboard, and infects the rest of life with grey minimalism, making it harder to answer letters, return library books, bother to cook meals not composed of pasta." 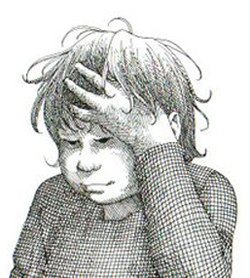 There are days, says Neil Gaiman, "when you sit down and every word is crap. It is awful. You cannot understand how or why you are writing, what gave you the illusion or delusion that you would every have anything to say that anybody would ever want to listen to. You're not quite sure why you're wasting your time. And if there is one thing you're sure of, it's that everything that is being written that day is rubbish. I would also note that on those days (especially if deadlines and things are involved) is that I keep writing. The following day, when I actually come to look at what has been written, I will usually look at what I did the day before, and think, 'That's not quite as bad as I remember. All I need to do is delete that line and move that sentence around and its fairly usable. It's not that bad.'

"What is really sad and nightmarish," Neil continues, "(and I should add, completely unfair, in every way. And I mean it -- utterly, utterly, unfair!) is that two years later, or three years later, although you will remember very well, very clearly, that there was a point in this particular scene when you hit a horrible Writer's Block from Hell, and you will also remember there was point in this particular scene where you were writing and the words dripped like magic diamonds from your fingers -- as if the Gods were speaking through you and every sentence was a thing of beauty and magic and brilliance. You can remember just as clearly that there was a point in the story, in that same scene, when the characters had turned into pathetic cardboard cut-outs and nothing they said mattered at all. You remember this very, very clearly. The problem is you are now doing a reading and you cannot for the life of you remember which bits were the gifts of the Gods and dripped from your fingers like magical words and which bits were the nightmare things you just barely created and got down on paper somehow!! Which I consider most unfair." 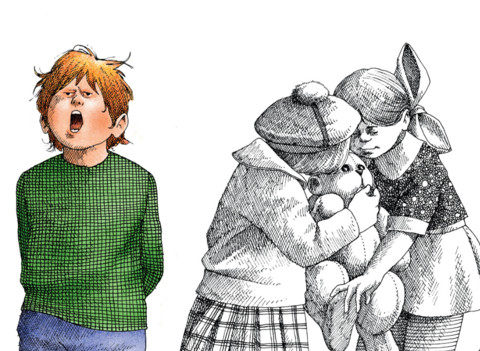 Douglas Rushkoff points out: "The creative process has more than one kind of expression. There’s the part you could show in a movie montage — the furious typing or painting or equation solving where the writer, artist, or mathematician accomplishes the output of the creative task. But then there’s also the part that happens invisibly, under the surface. That’s when the senses are perceiving the world, the mind and heart are thrown into some sort of dissonance, and the soul chooses to respond. 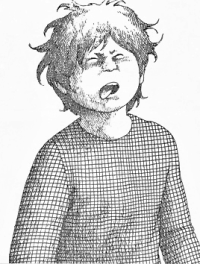 "That response doesn’t just come out like vomit after a bad meal. There’s not such thing as pure expression. Rather, because we live in a social world with other people whose perceptual apparatus needs to be penetrated with our ideas, we must formulate, strategize, order, and then articulate. It is that last part that is visible as output or progress, but it only represents, at best, 25 percent of the process.

"Real creativity transcends time. If you are not producing work, then chances are you have fallen into the infinite space between the ticks of the clock where reality is created."

My favorite reflection on the subject of Those Days comes from Dani Shapiro's Still Writing: The Perils and Pleasures of the Creative Life.

"When my son was little," she says, "he loved a book by Judith Viorst called Alexander and the Terrible, Horrible, No Good, Very Bad Day. Poor Alexander. He woke up with gum in his hair, he ended up in the middle seat during carpool, his mom forgot to pack dessert in his lunch box, he had a cavity at the dentist, and just when he thought things couldn't get any worse, he saw people kissing on television. You can feel the momentum of a day turning against you, and if it does, sometimes the best thing to do is crawl back into bed and wait for it to pass. 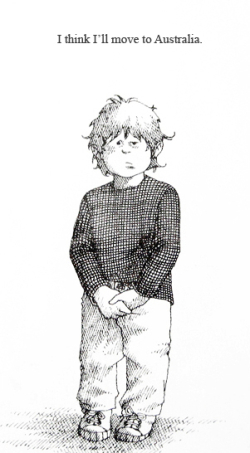 Shapiro advises that writers (and other arts freelancers) must learn to be kind to themselves. "What we're doing isn't easy. We have chosen to spend the better part of our lives in solitude, wrestling with our deepest thoughts, obsessions and concerns. We unleash the beasts of memory; we peer into Pandora's box. We do this all in the spirit of faith and exploration, with no guarantee that what we will produce is worthwhile. We don't call in sick. We don't take mental health days. We don't get two weeks paid vacation, or summer Fridays, or holiday weekends. Often, we are out of step with the tempo of those around us. It can feel isolating and weird. And so, when the day turns against us, we might do well to follow the advice of Buddhist writer Sylvia Boorstein, who talks to herself as if she's a child she loves very much: Sweetheart, she'll say. Darling. Honey. That's all right. There, there. Go take a walk. Take a bath. Take a drive. Bake a cake. Nap a little. You'll try again tomorrow."

For some reason I imagine this in Delia Sherman's voice, perhaps because Delia is so wise and sensible.

And indeed, we do. 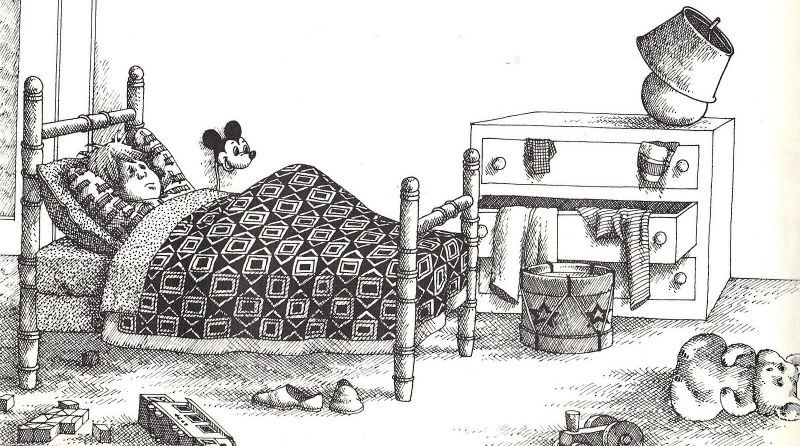 The drawings above are from the American children's book Alexander and the Terrible, Horrible, No Good, Very Bad Day, written by Judith Viorst, illustrated by Ray Cruz.  I often mutter Alexamder's refrain of despair -- "I think I'll move to Australia" -- whenever  it's One of Those Days. My English husband, who doesn't know the book, always looks a bit perplexed...but it makes me feel better.

in Creative blocks, On the creative process, On writing | Permalink | Comments (9)

No comments? I'll be the first then, which is rare, being as I'm in a later time zone. But a very early riser.

I find it oddly comforting to know that people like Spufford and Gaiman have crap days too. Somehow you assume you're the only one (even when you know that can't be true) and judge yourself accordingly. Danni Shapiro's advice is perfect, for me at least, and I will do my best to take it to heart.

This has always been one of my favorite books to read to children and adults. Perhaps because we can all relate to it... we've all had those days that snowballed into beyond terrible. And yet, I believe I've done my best work on days like that. Some of my best poems came from terrible no good days. Perhaps this is my form of therapy? I never thought of it until now. Thanks!

Love the words of Sylvia Boorstein, which you quote here...

Me-thinks we all could remember those words, many, many, many times, with ourselves. Not just on a day when much is "going wrong." Not just in regard to writers. In regard to how so many of us, treat ourselves, so much of the time.

If only we could treat ourselves like loved children, more often.... Rather than so easily berating ourselves, over this or that or the other thing.

Sorry if this is a bit OT. But I had this thought, and commented it. :-)

Oh, yes, I know this feeling well. There are days and sometimes weeks when nothing I draw or paint turns out the way I wanted. I've learned over many many years to do as suggested -- take the dog for a walk, bake cookies, and simply let it go for a while. I know the magic will return at some point, because so far in my nearly 60 years, it always has.

Yes, this was all comforting. Even not being able to open Myth and Moor comments yesterday....aieee!
Is that going to be forever, I worried. And then earlier I had that loss of fresh poems. Grr. I am thirteen
again, wondering how real authors and poets do it. But, good luck, a new story is unfolding and all I
have to do is find out where it is going. And later, revise, revise, revise.

I had a couple of bad days this last week. I tried to read, then I just gave up on that, too, and began cleaning the house. Somehow, all the badness worked itself out in those hours, along with laundry and dirty dishes, and layers of dust. I need to buy Dani Shapiro's book. Comforting post!

Tidying, cleaning, organizing often works for me, if a long walk (my first line of defense) doesn't work. I like this quote from Brigitten Nowak:

"When I am between ideas I clean my studio: I am still in the space, fulfilling my time, and surrounded by my tools and, since making art is more pleasant than cleaning up, it usually isn't long before an idea will appear that demands to be executed."

Oh, thank you. I find immense comfort in everything shared in the post and the comments. I'm not having such a day now, but, as you say, it's just around the corner. I agree with Brigitten--cleaning my office often does the trick. If not, I go out into the garden to weed or prune or rake, letting my mind wander. And if I can tell I need more than a few minutes, a long walk down to the lake is in order, even in rain.

Australia would be very glad to have you! :-)