Guest Post: Mythic Theatre in Devon
In praise of re-reading

Thank you all for your kind, kind messages while I've been gone, which have touched my heart more than words can express. The "Life Stuff" that has been dominating my time is not quite over yet, but I'm going to try to post again, at least as often as I'm able to.

The songs today are for the bumblebees that gave our house its name, Bumblehill. And for bee lovers Amal El-Mohtar (author of The Honey Month) and Chagford fabric artist Angharad Barlow (creator of Sustainable Stylings and Atelier Bee).

Above: "Save the Bees" by the brilliant Anglo-Scots folk trio Lau, filmed in 2012.

Below: "The Hum" by the Yorkshire folk duo O'Hooley & Tidow, filmed earlier this year in Leeds.

Below: "Beeswing," performed by the Irish band Caladh Nua in in Castle Gurteen, Kilsheelan, Co. Tipperary, 2013. The song was written by the great Richard Thompson.

In the last video today, Andy Letcher (another Chagford friend) explains the inspiration behind his band  Telling the Bees. I highly recommend both of the band's CDs (with cover art by Rima Staines for an added bonus). Their lovely song "Telling the Bees" is not online, but you can listen to an equally lovely song, "Blackbird" here.

"Telling the bees" is an old English folk custom -- which many still practice today -- in which bees are kept informed of all significant events in family and village life. 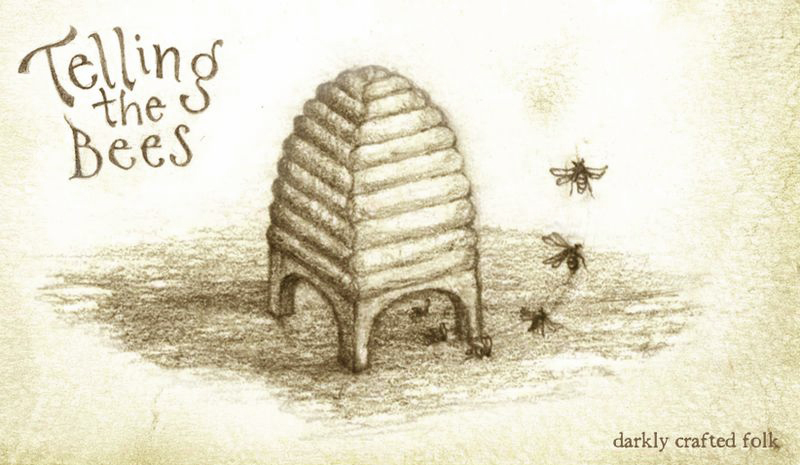 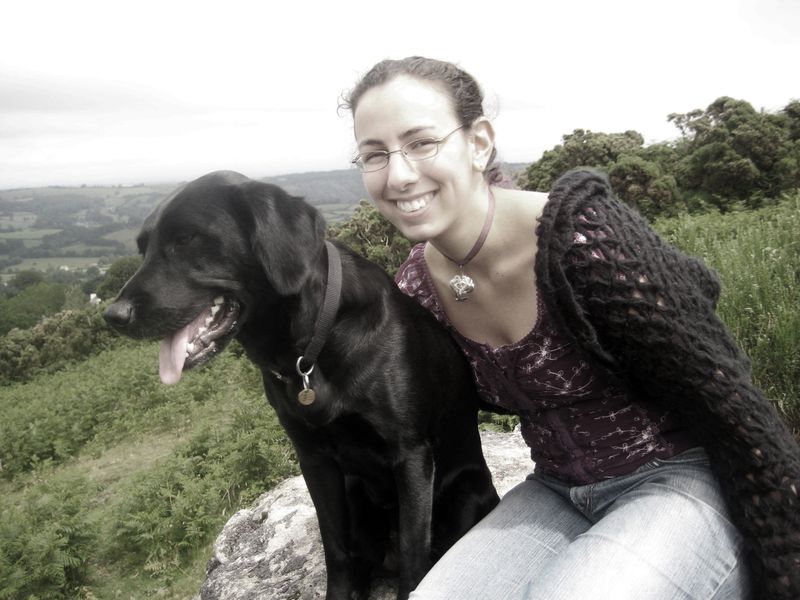 Amal with Tilly at the top of Nattadon Hill a while back. They've been good friends since Tilly was a pup. "We have, " Amal says, "each of us, a story that is uniquely ours -- a narrative arc that we can walk with purpose once we figure out what it is." (Tapping the Long Tale) 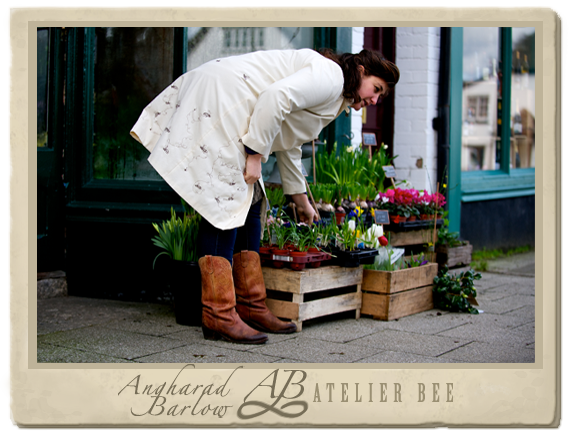 Angharad in her beautiful bee coat. "The earth bee," she says, "enables the energy, spirit and ideas to exit the cloth, so that nothing can get trapped and the magic can flow in and around the wearer.

A welcome musical trove dear one...you're the bees knees, the honey in the pot, and golden in your ways.

These pieces about the bees are all beautiful! At the moment myself and Clare spend a lot of our time watching the lavender and buddlia in our garden simmering with honey bees, bumblebees and also butterflies of many species. The fact that there aren't as many as there have been in previous seasons is a sadness to us, but we derive some hope that the numbers seemed to have stabilised and now hopefully they'll start to grow again.

The door stood open to the dark,
Deep indigo framed in painted pine.
In silence we sat and waited,
The night mosquito-voiced,
Moth-haunted
And expectant.

Then through the dark she came,
Each pizzicato step
Made with considered care,
Precise as a pianist’s hands
Making sonatas from silence.

In flamed relief
She stood against the dark,
Her coat in quiet fire,
Her eyes deep mirrors

Of worlds and wonders,

And of wonders and worlds.

The little bee
is mostly buzz.
Her little body,
mostly fuzz.
Her head is tiny,
great big eyes.
She wings from flower
off to hive.
She dances boldly
through sky lanes
and never once
does she complain.
She carries pollen
on her back
coagulates it
in a sac.
She doesn't make
a lot of money,
but boy!
she certainly makes
honey.

Beautiful, Stuart. My heart brims over reading this.

So sweet! I can see it in a picture book now...

Your posts are usually the last which come through in my evenings and this one took me into the dark with a smile. Welcome back.

It is so wonderful to see you posting again, and on bees! I am planning to paint bees on my studio wall, and spent last night gathering reference material...so I am ecstatic. I have been wishing you well, as you are one of the brightest influences in my life, and I wish you all the best. Thank you.

All of us pleased as punch,
We, this all over the earth bunch.
Now you'r back Terri, life is sunny.
Stuart and Jane winsome and funny.
The bees fly in magical air
And we hush and whisper, there
Is a rightness in a mythic moor.
With Tilly by the magic door.

I had only just discovered your blog, when you took a little time away. I'm so glad to see you back, and these wonderful links to bees. Sending good wishes to you for working things out

Thanks for these songs. Welcome back.

I'm glad you are back. I know that this link isn't to music about bees, but I thought of your love of music when I started watching this Austin City Limits program. I hope you enjoy it: http://video.pbs.org/video/2365164737/. It's Sarah Jaroz and The Milk Carton Kids.