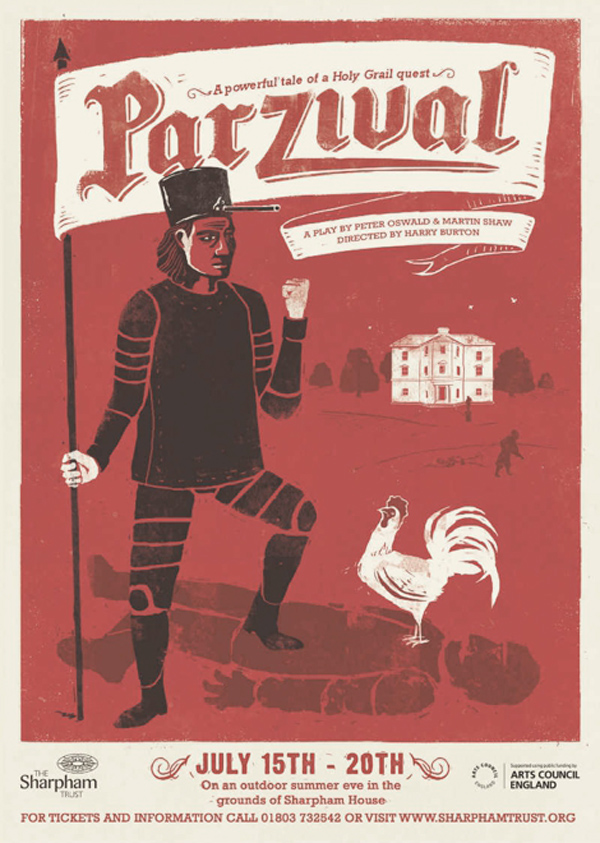 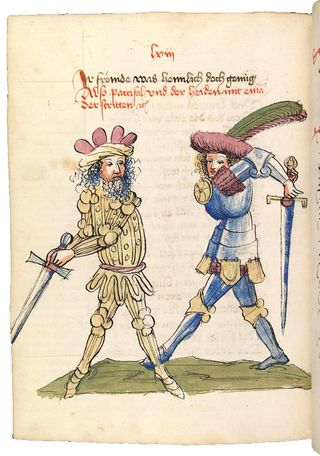 On arrival at Sharpham, the marshals help you to park and find your way to the "holding field," with its beautiful views across the River Dart. As the audience sits admiring the landscape, a faint sound of drumming comes from the woods below; not awful ‘"let’s bang on a djembe" drumming, but rhythmical, pulsing, and fun. There is something interesting and enticing happening down there in the trees. Immediately you know that real care and thought has gone into this promenade performance: you will be in safe hands during a journey both physical and metaphysical into the forest and on the quest for the Grail.

For promenade performance to succeed, it needs a skillful guide. In this show, the task falls to the artful storyteller, Martin Shaw. Throughout the evening, he entertains, guides, informs, and cajoles the audience -- throwing in funny, throw-away contemporary references every now and then, while also drawing pertinent parallels between the world of myth (in which the audience finds itself) and our own times, our own lives.

The flow of the show -- both physically, in the movement from the forest to the court and then to the castle, and in the narrative -- is superbly handled. This is achieved by a combination of well-executed elements: the stunning grounds of Sharpham used in perfect combination with the narrative; the masked ushers and the ever-present story-teller guiding us on; musicians and drummers keeping us connected to the play as we move through the trees; and skillful stage management moving actors and props unobtrusively from scene to scene. 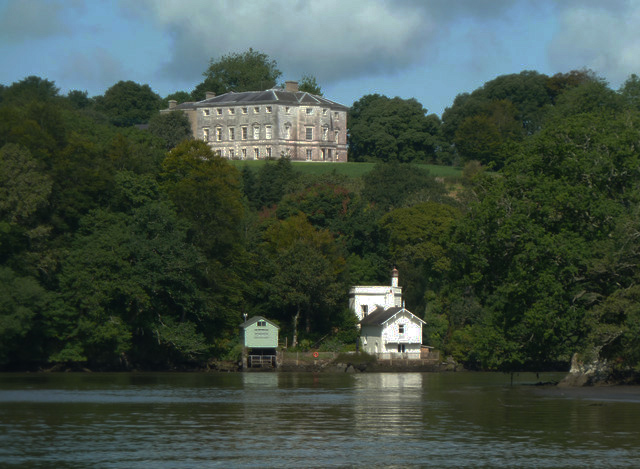 Sharpham itself provides magnificent spaces for the performance, with just the right addition of scenography and lighting where needed. These are never intrusive; and, as with all the elements of this production, handled with great sensitivity to both the story and the land.

Each scene is played out in a different part of the estate by a wonderful ensemble cast who are clearly enjoying themselves. The acting is good: physical, funny, moving, and committed. Lines are delivered well, and are audible. (Too many outdoor productions suffer from inaudible dialogue.) There are lovely touches of characterization and well delivered humour. My own speciality is mask theatre, so I feel justified in singling out one particularly fine actor in this regard. Mask work is woefully bad in many productions, but Helen Aldrich inhabited her mask brilliantly, with the right physicality to support it. This adds yet another layer of myth and magic to an already magical show. 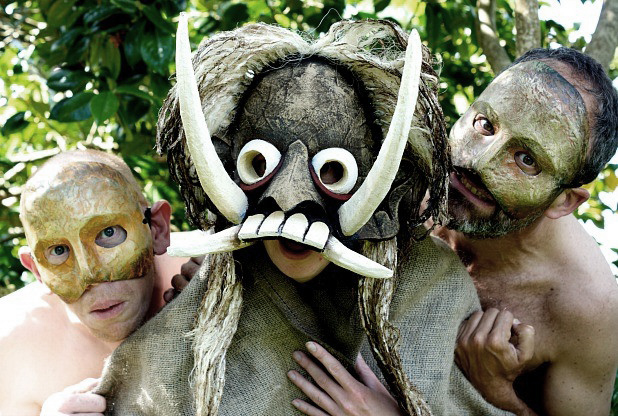 As well as the show's professional cast there is also a company of community members who play the masked guides. Dressed in black with blue sashes, they subtly move the audience forward and create temporary performance areas. They also play in some scenes themselves -- which they do with gusto and, as with the main cast, a good sense of ensemble.

The production's music is just right: from the incredible drumming that greets the audience in the first forest glade to the incidental music -- subtle, humorous, and evocative by turns -- played on a variety of strange looking instruments.

It is a precious thing to find theatre that entertains and transports; that, for a few hours, brings you into a mythical world. Theatre strives to make the intangible mystery of the human condition tangible, if only for a brief moment. Parzival achieves this ... and then, as with all good theatre, the ephemeral nature of the form asserts itself. The glimpse of the "intangible made tangible" slips once again beyond our grasp ... like the Grail of the story.

Directed by Matthew (Harry) Burton, Parzival shows the powerful nature of what theatre can and should be, when all of its elements -- story, performance, use of space, lighting, music and production -- work seamlessly together. It's running at Sharpham House until Sunday, July 20th. If you like theatre, if you like myth, and particularly if you like the combination of the two, then hurry to get one of the last tickets for this inspiring, thought-provoking show.

For those of you too far away to see the play, I recommend seeking out Martin Shaw's excellent books, and the West Country School of Myth.  - T.W.

Brilliant! Thank you for sharing all of this - it makes my heart move into The Possible Realm . . . Since i doubt I'll arrive in person . . your blog post has given me a taste and, for now . . it is enough - you have given my imagination wings . . .

A wonderful, life enhancing presentation, filled with amazing, innovative talents and the magic of the creative spirit in all it's expressions. Filled me with joy.

Thank-you for offering up such an enlivening report! For me, it is thrilling just to imagine that this is taking place somewhere and to be led into the scenario and the magic in my imagination!

Wow--wish I'd been there. Will they be doing it again next year do you suppose?

Stunningly wonderful from what I could see in the little video and Howard's review.

I love masked drama. I love performing and being in the audience. My bag was hand puppetry, but when I worked in the schools I had them do Japanese drama, as well as European comedy and tragedy. We had fun with a Christmas Carol, doing that with puppets and people.

Connie--I am reading the Jim Henson biography now. If you haven't, it's a MUST.

Hm. Let me look at my schedule. If only my familiar could help me go by broomstick across the pond,
this would be a wondrous adventure. I love all theatre that means something. The more ancient the
better. Once upon a time, in real time, I was Greengrocer of Norwich for three years at the Renaissance
Faire. We did accurate but irreverent Miracle and Mystery plays.

Oooooooo how I want to be there! Wouldn't central park NYC at the castle make a wonderful setting for this? How I'd love you to get a grant and all come over for the performance. Wishing you and Howard the best possible everything....and Tilly too.

You're welcome...though the credit for this one goes to my husband Howard.

I'm hoping to be back online next week everyone. Life Stuff still plodding onward, but the rest of life must go on....

Already in love with your part of the world, and now, added bonus of magical theatre! Will need to visit this beautiful and creative oasis some day.

This looks wonderful. Wish I were closer, thanks for providing the link. Good to hear you will be back soon, your blog is something I always look forward to.--hart

Have you made a full video of Parzival to sell ?
Then we the deprived souls across the great pond could indulge in the enchantment too!
So happy to read that you will be back again next week!
Best wishes to you, Howard and Tilly...

How I wish I were in Devon. This sounds a magical evening. I've never given any thought to how an actor inhabits and mask. Now I will. Thank you for this dream-inspiring review.

So looking forward to your return, Terri! Life's lost some twinkle without you. I hope you are well.

And I wish I'd spell-checked before hitting send--I meant "how an actor inhabits a mask"....

I don't know if there's a video; you'd have to ask the folks who created the show. You can reach them through The West Country School of Myth: http://www.schoolofmyth.com/

Many thanks for your review of Parzival at Sharpham House.

The storyteller, Martin Shaw, is our son. Needless to say we were thrilled with his performance. But, as your piece emphasised, the evening as a whole was quite superb.We were swept along alomg it all - setting, performance and overall production.

You put it very well: here was theatre that made tangible the intangible...art that entertains and transports.

we're going to make a hard copy of your review, have it stuffed, mounted and placed over the mantlepiece!

How wonderful this sounds! I've experienced a few 'promenade' performances over the years, it is a form of theatre that has so much potential. In 1990 I saw a version of 'Le Morte D'Arthur' in London, part of it performed in an old church. But the one that had the biggest impact on me was a most marvelous version of the medieval Mystery Plays, performed here by our own Black Sawn Theatre Company and the students at the Western Australian Academy of Performing Arts. It was set in and around the grounds and buildings at the University of Western Australia, and it was utterly stunning. The Annunciation of the Virgin scene was so beautiful it had me blubbing like a baby, and I'm not even religious. The only snippet I can find anywhere is this link, but it really doesn't do it justice!