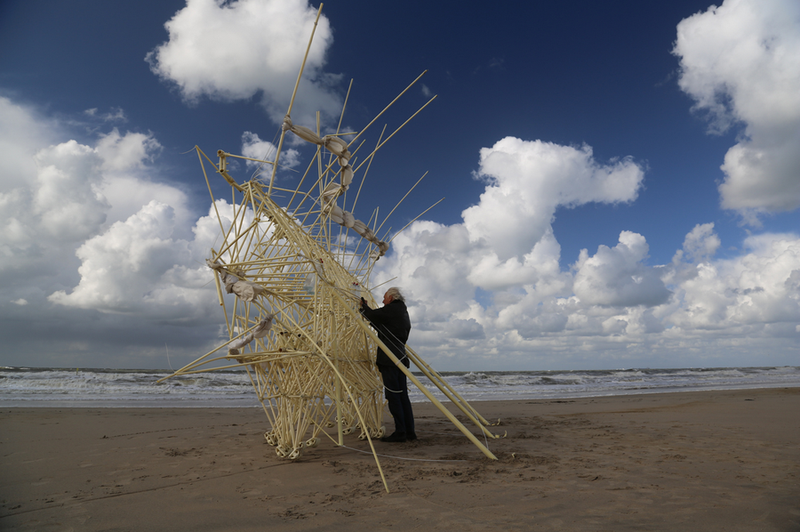 I am awed and inspired by the work of Dutch artist Theo Jansen, who creates "sand beasts," kinetic sculptures that roam on the coast near his house in the Netherlands. 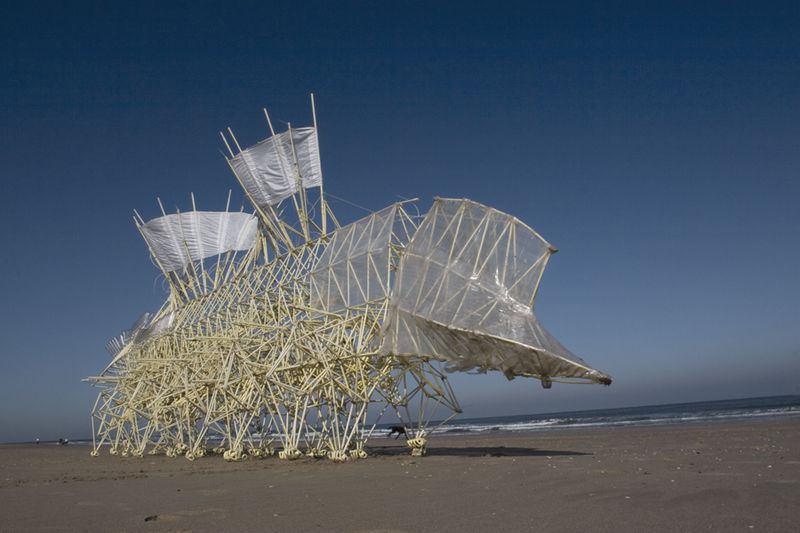 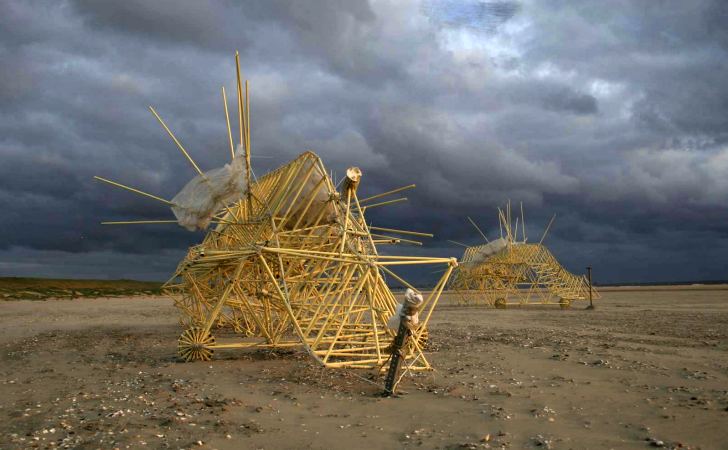 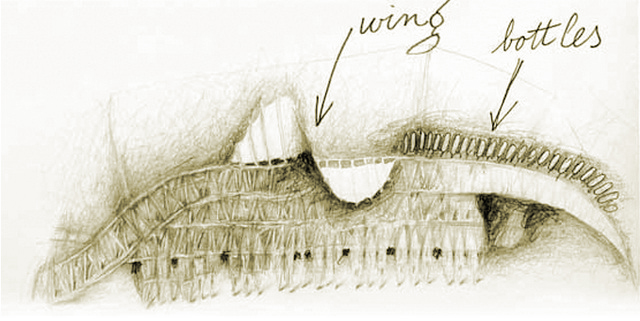 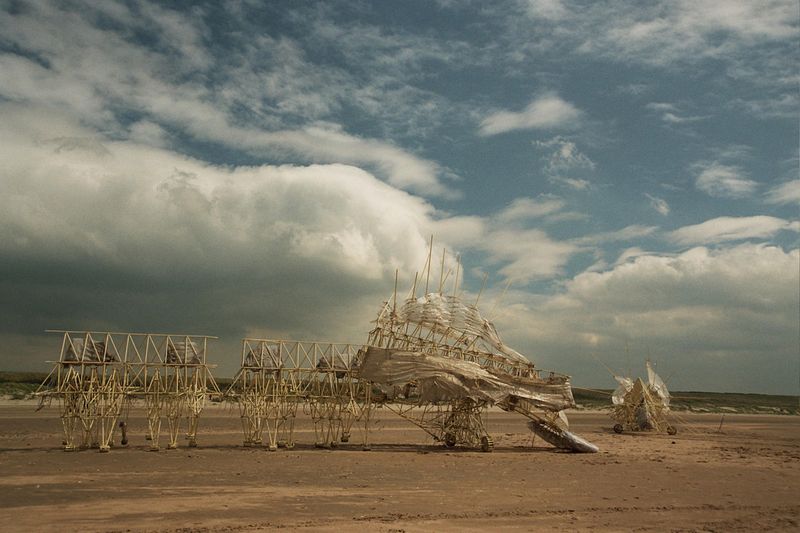 Jansen's sandbeesten remind me of this passage from Caspar Henderson's essay "Rereading The Book of Imaginary Beings by Jorge Luis Borges":

Such creatures, he writes, "remind us of what is beyond dream – the real forms of living creatures that exist without human agency....For we who live in the light of what paleontology, evolutionary biology and genetics are revealing about living forms, our response to the real may – will, if we are truly awake – be one of astonishment and wonder at life's inventiveness. Even ordinary-seeming animals are marvellous in the light of evolution: the chicken, for example, is the closest living relative of Tyrannosaurus rex. Extraordinary ones make those in the pages of a medieval bestiary seem poor indeed. Compared to the leafy sea dragon (a cousin of the seahorse that looks very much like seaweed and yet also like a dragon) and the sea slug Elysia chlorotica (which photosynthesises with genes stolen from the algae it eats, and is as green as a leaf), the mythical Barometz, or vegetable lamb of Tartary, is a dull affair.

"The contemplation of natural history allows us to marvel at our place in the universe. As Charles Darwin wrote early in his career, 'If, as the poets say, life is a dream, I am sure in a voyage these are the visions which serve best to pass away the long night.' "

(Casper Henderson is the author of The Book of Barely Imagined Beings: A 21st Century Bestiary.) 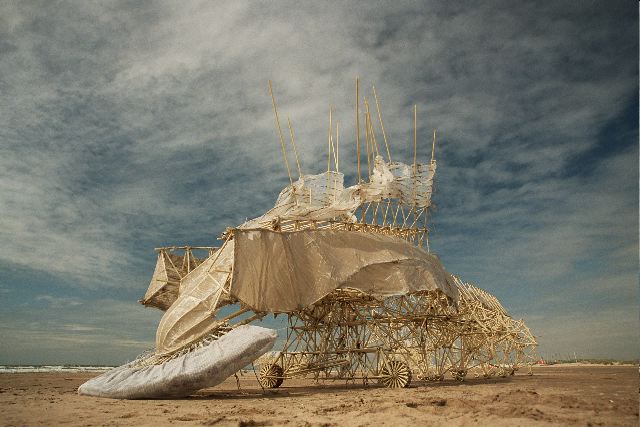 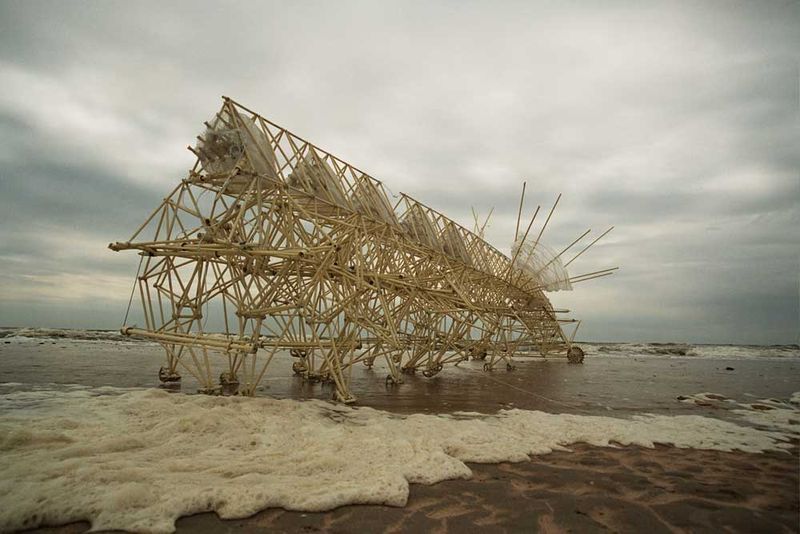 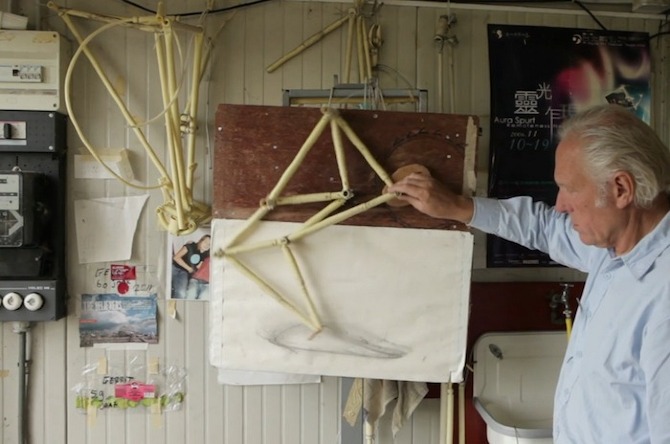 In the very short film below (by Georgi Banks-Davies & Lucy Campbell Jackson), Jansen discusses his "animals," and you can glimpse one of the smaller Standbeesten in motion.

(For a more in-depth look at the artist's creative process, listen to his 2007 TED talk here.)

The next film, "Strandbeest Evolution," from Jansen himself,  shows numerous examples of the beasts as they've evolved since 1990, with the music of Khachaturian's Spartacus.

thank you for all the links; his work is absolutely mind blowing

Struggling to their PVC feet,
animated by gusts of wind,
these mythic mammoths remind us
of the swiftest of life,
the passing of gods,
the permanency of art.

When they rest at last
in the sand beast boneyard,
even destroyed they retain
the beauty of their making,
the soul of their creator,
the innocence of wind.

Hi, I pop over to your blog occasionally when you are mentioned in someone else's blog, usually Thelma at Wake Robin. I can find no way to follow you, maybe you could give me a hint.
The structures above are well just amazing.

This man is obviously the most incredibly gifted engineer! But I'm afraid I find his creations very creepy. Sort of Jurassic Park, meets Darwin meets something silently and malevolently walking through your nightmares.

All those skeletal legs....!

Brrrr. However nightmares have there place. Hobgoblins to nudge us of hidden fear
brought to light. I once read one of those books about investigating those dreams and
ask the creatures, "Who are you?" I often had dreams about sinister lions and so, in a dream I asked, "Who are you?" The dream lion turned me into a lion for a while and we
danced around and it is difficult to explain the change, but I never feared dream lions
again.

I smell the sea and see so much of "mythic mammoths" and "the passing of gods."
Have you read A. S. Byatt's "Ragnarok: The End of the Gods? It is a superb scary wonder
to enter into.

Nope--but must find it. I love Byatt, though the width of the last of her books left me brutalized and I haven't picked it up again. Hernia inducing. (It's still in Scotland or I'd read it during convalescence!)

I disagree--they are extraordinarily magical to me, mammoths that bred with lost galleons.

Stunning. I would love to go to that beach and sit all day watching them, or run alongside composing poems that only the air and sea will ever hear, putting words down on the sand using a forefinger or a stick rescued from the sea, the perfect ephemera.

'Mammoths that bred with lost galleons'...what a wonderful image! But my 'phobic reaction' remains. Irrational perhaps, but that's the nature of phobias. All of those legs remind me of dead can-can dancers, made fleshless by decay and somehow reanimated.

Phyllis, your dream lion sounds absolutely charming; unfortunately my nightmares have never been so conciliatory and accommodating.

What is truly fantastic is the combination of his sculptural ingenuity and the contrast of the ever brooding Dutch skies which often have inspired great works of art as they almost beg for color and life to bloom beneath. Wonderful.

I wish Theo Jansen could read this, Jane. Beautiful.