Mysterious by moonlight
Roll up! Roll up!

Tunes (and puppets!) for a Monday morning

One of the loveliest things about growing older in a small Dartmoor village is watching the next generation grow up and take on the world themselves. Last month at 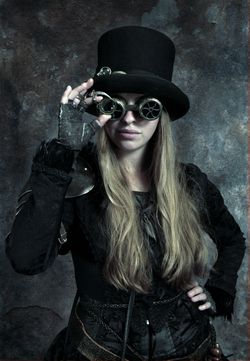 the Chagford Film Festival, for example, we had the great pleasure of watching Toby Froud's first puppet movie, Lessons Learned. Toby, the son of my friends Brian & Wendy Froud*, grew up in Chagford and now lives with his wife and son in Portland, Oregon.

Lessons Learned was made with funding from Heather Henson's Handmade Puppet Dreams, as well as a Kickstarter campaign, and has already won a slew of awards from film festivals in the US and Europe. Chagford puppet master William Todd-Jones performed the character of the "The Boy" in the film, and the music is written and performed by his daughter Lillian Todd-Jones (pictured in the glorious "faery steampunk" photo by Brian Froud to the right) and her musical partner Gordon Mills Jr.

Above, the trailer for Toby's Lessons Learned. Below, the theme song for the film by Lillian and Gordon. There's also a video of Toby talking about the process of making the film after a screening in the U.S. here.

Lillian, too, is part of that younger generation of artists strongly influenced by their Chagford roots -- although in her case, music-making is just one part of her life, for she's also an Oxford-trained zoologist who has studied lions in the wild in Africa. In the magical video below, shot near Chagford, she teams up with Welsh singer-songwriter Siôn Russell Jones for "Guillotine." (More about the collaboration here.)

If you'd like a little more of her music this morning, go here for Lillian's cover of  "As the World Falls Down" by David Bowie. (The song comes, of course, from the film Labyrinth, in which Toby Froud was the baby in the striped pajamas.)

Moving from Chagford to Cardiff, Wales (because I love this young man's music), here's one of Siôn Russell Jones' solo videos: "So Long," from his 2013 EP of the same name, which was recorded on Dartmoor.

* And speaking of the Frouds, Brian and Wendy have a gorgeous new book out, Faeries' Tales.

in Film, Life in a Devon village, Music | Permalink | Comments (6)

COMMUNITY and CONTINUITY OF PERSONS is what you have there....I will listen to the offerings when I'm more awake It's just 5:38 in the morning here in NYC and the neighbors are still asleep...<3 to you Terri and to Tillie and Howard, to Chagford and Dartmore too. (the <3 is supposed to translate to a heart...it does that on Face book...don't know if it does that here)

What a great collection of music for a Monday morning! Thank you! I particularly love the puppets - I am enamoured of puppets - and he's on my side of the Atlantic. I'll have to check this movie out.

Thank you Terry. You introduce me to such amazing, creative artists and their community. A family of creativity.

Oooooooo--okay I've done the music and visual tour of the minds and hearts of these talented bunch. It's a mostly dark vision for a mostly dark time but artistic expression as the weapon of choice is the hopeful vision of a future for these voices. Chagford is the deepest sort of place!

Ps I shared the Frouds on Face book and hope the film gets a USA release sometime.

Such great music. And it's lovely to read of your community, it's so rare for these days to find such a deep-rooted and magic-hearted family of souls.