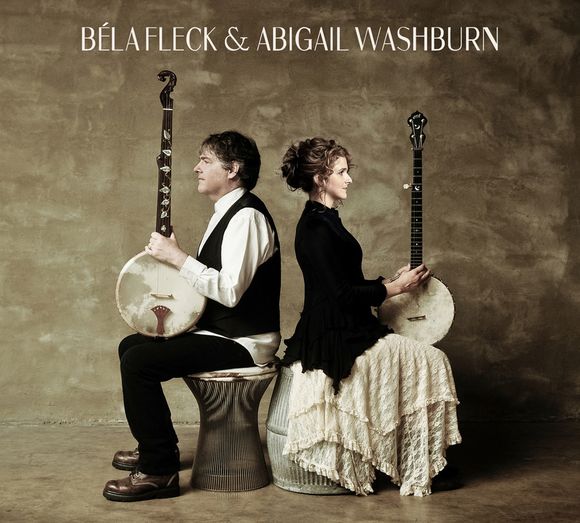 Béla Fleck and Abigail Washburn is a terrific new CD of American roots music from two of the world's best banjo players (now married and the parents of a 1-year-old son). Fleck and Washburn had distinguished separate careers before collaborating on The Sparrow Quartet: two banjos, cello and violin playing a heady mix of original songs and traditional Americana combined with a wide range of other musical influences. Now they're on the road as a duo, focusing on Appalachian murder ballads, bluegrass and other homegrown sounds.

Below, The Sparrow Quartet performs "Nobody's Fault But Mine"  at the Greyfox Bluegrass Festival in 2008: Washburn and Fleck on banjo, Ben Sollee on cello, Casey Driessen on violin.

"And Am I Born to Die?" performed by Fleck and Washburn last month, showcasing the latter's gorgeous voice.

Next, a couple of tunes from their solo work...

First, "City of Refuge" performed by Abigail Washburn for NPR's "Tiny Desk Concert" series in 2011. (It's the first song on the video below.) Washburn spent a few years in China and had planned to move there permanently before discovering the banjo and embarking on a music career instead. Thus she often incorporates Chinese folk music and folk arts into her work, wrapped around American roots music and original compositions. In addition to her collaborations with Fleck, she has two solo albums, a collaborative album with David Liang, and two albums with the band Uncle Earl. I recommend them all.

"Over the Wall" by Béla Fleck and the Flecktones, from their 2007 album The Hidden Land. Fleck is legendary, of course, for innovative banjo music created over three decades and is arguably the best banjo player of our time. He's recorded dozens of albums with The New Grass Revival, The Flecktones, various other musicans, and solo, and has won numerous music industry awards. The performance below is a perfect example of the interstitial, genre-hopping approach he takes to playing his instrument. In addition to Fleck, that's Jeff Coffin on flute,  Roy Wooten on percussion, and Victor Wooten on bass guitar.

A little more banjo music this morning, starting with:

"Never Been Alive" by The Avett Brothers from North Carolina, filmed in rehearsal last year. (As you probably know by now, I adore these guys.) They've released eleven albums since 2002, the latest of which is Magpie and Dandelion. The band consists of Seth Avett (guitar), Scott Avett (banjo, picked in the "clawhammer" style), Bob Crawford (double bass), and Joe Kwon (cello).

I'm also mighty fond of The Punch Brothers from New York, filmed below performing "Rye Whiskey" in Sydney, Australia.  That's the amazing Chris Thile (of Nickle Creek and other projects) on mandolin and lead vocals, Noam Pikelny on banjo, Gabe Witcher on fiddle, and Chris Eldridge on guitar. The song comes from their second album, Antifogmatic (2010).

And although this post is already a lengthy one, I can't resist one more:

And if you'd like some transAtlantic banjo music this morning, try "Banish Misfortune/The Maid Behind the Bar" performed by Béla Fleck with Irish tenor banjo player Gerry O'Connor; and "Appalachian Celtic Melody" by The Alison Brown Trio.

Bela Fleck and Abigail Washburn, wow! What a sound. Her voice is beautiful, haunting, soulful. The banjo. Such a glorious discovery to move me on a wet and soggy Pacific Northwest Monday morning. Thank you Terri such a treat.

Glad you enjoyed it!

Every time Bela Fleck comes to town, I have gone to hear him in all his incarnations. Hope he comes with wife this time.