The Library of the Forest 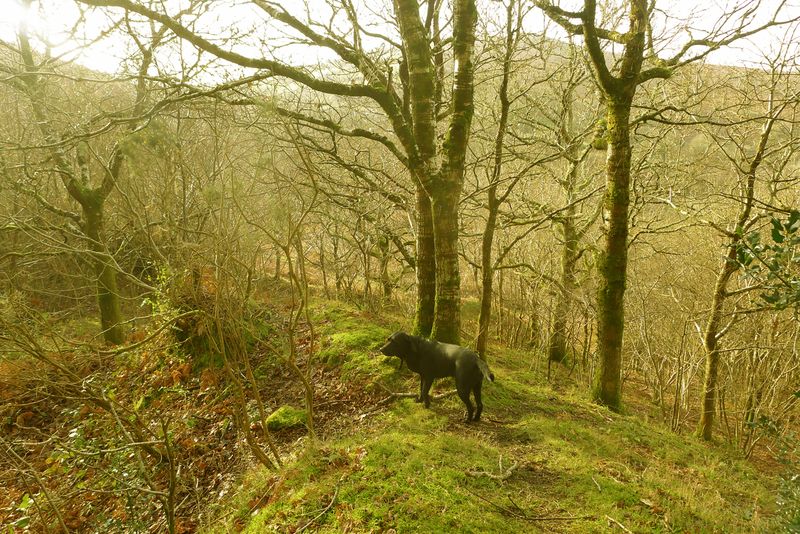 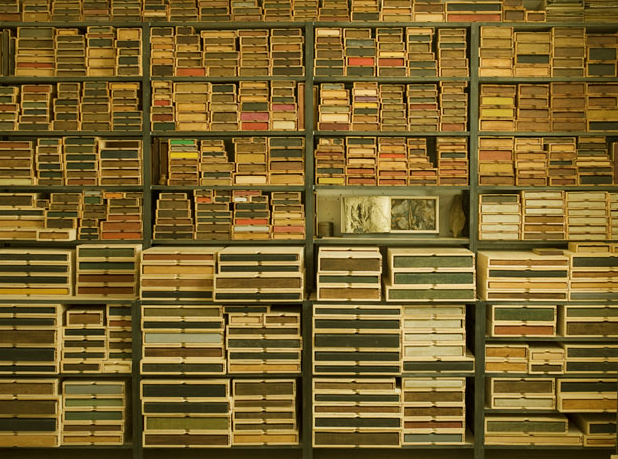 From The Old Ways by Robert Macfarlane:

"The library of Miquel Angel Blanco [in Madrid, Spain] is no ordinary library. It is not arranged according to topic and subject, nor is it navigated by means of the Dewey Decimal system. It's full name is the Library of the Forest, La Biblioteca del Bosque. It has so far been a quarter of a century in the making, and at last count it consisted of more than 1,100 books -- though its books are not only books, but also reliquaries. Each book records a journey made by walking, and each contains natural objects and substances gathered along that particular path: seaweed, snakeskin, mica flakes, crystals of quartz, sea beans, lightning-scorched pine timber, the wing of a grey partridge, pillows of moss, worked flint, cubes of pyrite, pollen, resin, acorn cups, the leaves of holm oak, beech, elm. Over the many years of its making, the library has increased in volume and spread in space. It now occupies the entire ground floor and basement of an apartment building in the north of Madrid. Entering the rooms in which it exists feels like stepping into the pages of Jorge Luis Borges story: 'The Library of Babel' crossed with 'The Garden of the Forking Paths,' perhaps.... 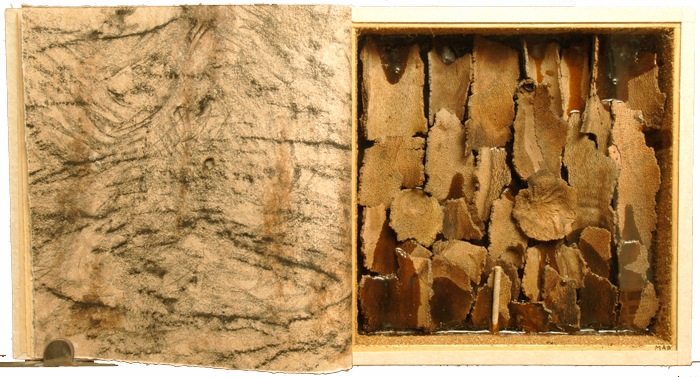 "The Library of the Forest owes its existence to storm and snow. Between 30 December 1984 and New Year's Day 1985 a severe winter gale struck the Guadarrama Mountains, the sierra of granite and gneiss that slashes north-east to south-west across the high plains of Castille, separating Madrid (to the south) from Segovia (to the north). Thousands of Scots pines that forest the Guadarrama were toppled. For those tempetuous days, Miguel was trapped in his small house in Fuenfría, a southern Guadarraman valley. When at last the storm stopped and the thaw came, he walked up into the valley, following a familiar path but encountering a new world: fifteen-foot-deep drifts of snow, craters and root boles where trees had been felled, sudden clearings in the forest. As he walked, he gathered objects he found along the way: pine branches, resin, cones, curls of bark, a black draughts piece and a white draughts piece. When he returned home to his house he placed the gathered items in a small pine box, lidded the box with glass, sealed the glazing with tar, bound pages to the box with tape and gave the whole a cover of card-backed linen. 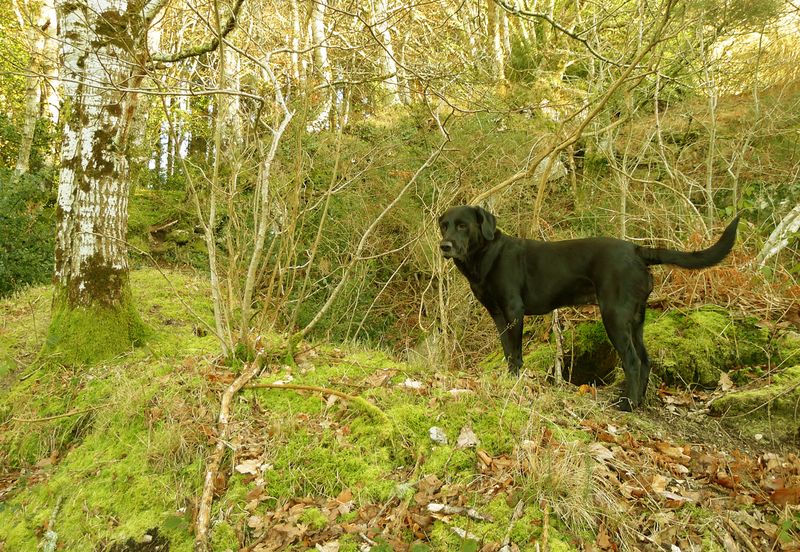 "In this way the first book of the library was made. Miguel called that original book-box Deshielo, 'Thaw,' and it became the source from which a stream of works began to flow. 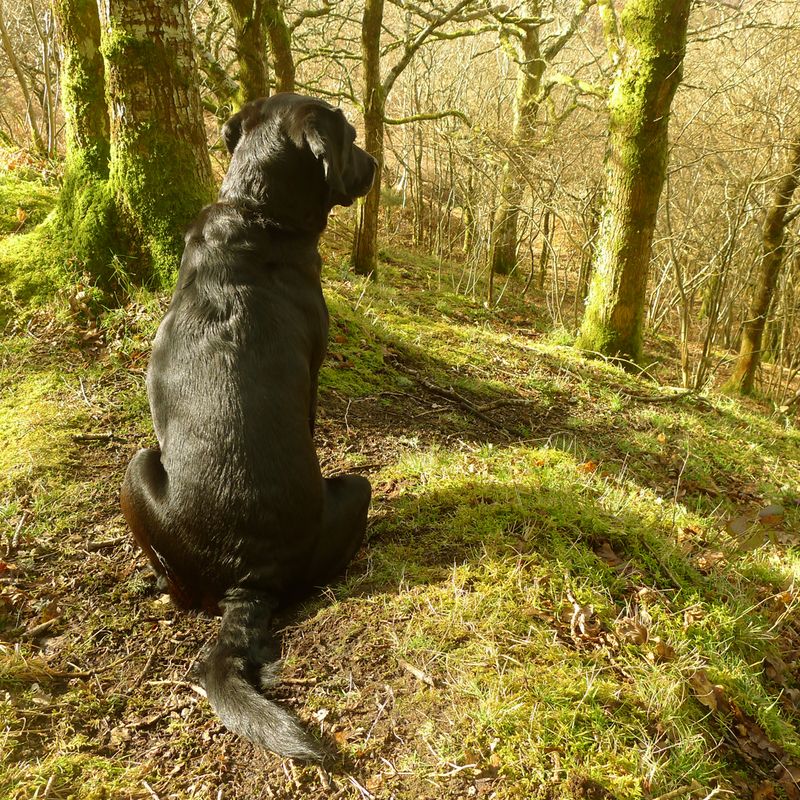 "His manufacturing method is unchanged in its fundamentals. All his book-boxes contain objects he has collected while walking; the results of chance encounters or conscious quests. The found objects are held in place within each box by wire and thread, or pressed into fixed beds of soil, resin, paraffin or wax. Thus mutely arranged, each book-box symbolically records a walk made, a path followed, a foot-journey and its encounters. And the library exists as a multidimensional atlas -- an ever-growing root-map, and a peculiar chronicle of a journey without respite."

"Each of my books records an actual journey but also a camino interior, an interior path."
- Miguel Angel Blanco 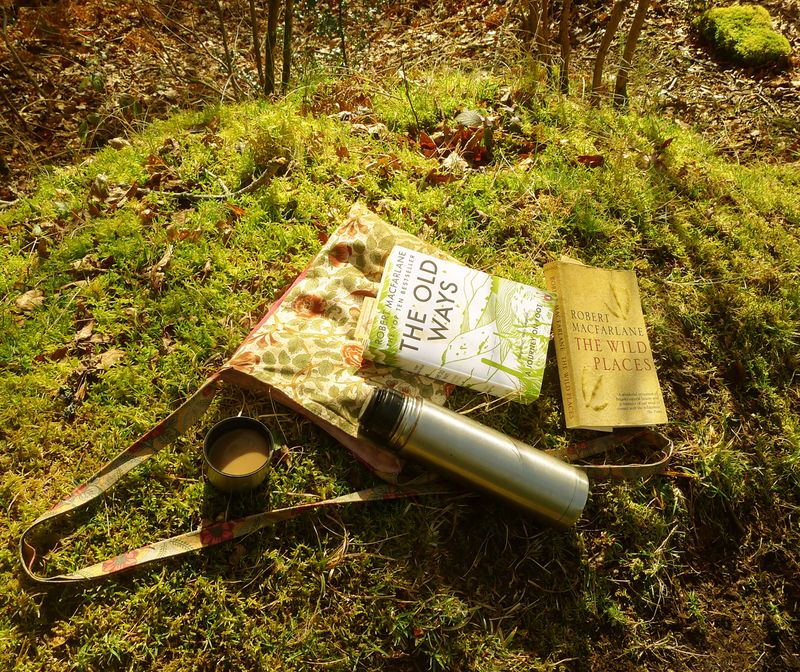 Photographs: Early morning coffee break in the Devon hills; and Blanco's Library of the Forest.

This is fascinating, and what a creative, tangible way of making memories. I am very tactilly-oriented, so it really appeals to me. Thank you Terri for sharing!

Astonishing, moving. And eventually they,like the forests themselves, will become ash,dust, crumbled stone. A true momento mori, a snapshot in time.

Fascinating, Terri! Thanks for this. And I've just started reading MacFarlane. "The Old Ways" and "Landmarks" just arrived.

I love MacFarlane's books, they have such a richness of spirit and language, and such an uncluttered love for the world.

these are my thoughts, exactly.

This is amazing! :-) Thanks for sharing! Talking about sharing, I have just launched my first self-produced album "The Inferno". It is part of a trilogy inspired by Dante's Divine Comedy. The album is about my spiritual journey through darkness. I would love to send you a copy of my handmade album, would you mind emailing me your mailing address please? My email is amatistic@gmail.com :D xo AMA

Ama, thank you, I'd love a copy. I'll send you an email message.