The love of poets
The folklore of May Day

The cauldron of dreams 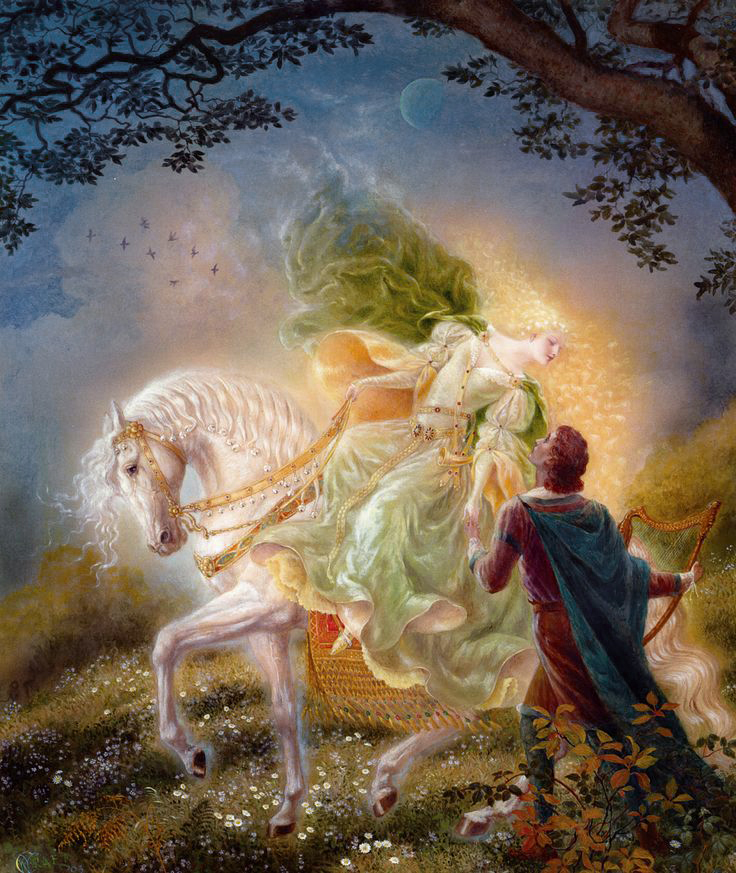 May Day seems like the perfect time to re-visit this passage by Ellen Kushner on Celtic myth and legend in fantasy fiction, from a piece published years ago in Brigit's Feast magazine: 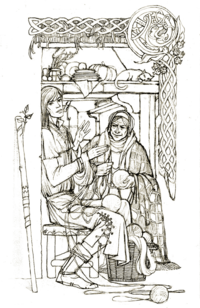 "For a long time, one almost felt that Celtic myth and legend had too much of an influence on American writers of fantasy," she says. "It was as though, in one little corner of literature, the sun had never set on the Celtic Twilight...lovely as far as it went, but it seemed a shame that modern American fantasists were ignoring all of the other remarkable myth and magic traditions that exist in the world. I remember discussing this with other writers and editors in the 1980s. Theoretically, I was in favor of more multicultural fantasy; but in practice, it was hard to imagine how it would work. Fantasy is, paradoxically, both a radically innovative and a highly conservative tradition. The images and tropes of the Celtic world were so pervasive. Writers could rely on a sort of mythic shorthand: cloaks and swords, weirds and geases, bards and harps...they needed no translation, no explanation; the writer could launch right into the story and expect the audience to follow. 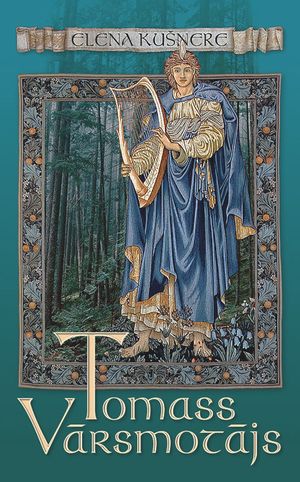 "But fantasy literature does not exist in a vacuum. Just as popular culture, from fairy tales to  folk-rock groups like Fairport Convention, Pentangle, and Steeleye Span had made us familiar with Celtic and British folkways, so, now, the popularity of world music -- whether it be healing music from Morocco, women's singing from Bulgaria, or Cajun dances from the bayous of Louisiana -- has aroused a curiosity in the world's traditions; a sense of magic and possibility, even of personal connection with places our families have come from, or places we have dreamed of.

"When I wrote my novel Thomas the Rhymer, I had spent years absorbed in British folkways. Since I was a teenage girl, I had read tales, collected ballads, even sung them. I loved them passionately, finding a deep mystery in their illogic and poesy that was very much like the magic of my favorite fairy tales and children's books. It makes me profoundly uncomfortable these days when I hear someone say, 'I've got Celtic blood in me, so I really love Irish music/Scottish legends/(what have you)...'

"I have no Celtic blood in me. There is nothing in my face or ancestry that is not Jewish. The myth of 'blood rights' has caused a lot of trouble in the 20th century. I was born in America. The Christian-dominated Western culture I have grown up in comes from the British Isles, and I love the English language. If I do need a right to the Celtic material, it is from there that I stake my claim. And so I would beg everyone who enjoys fantasy, myth, and music these days to be respectful of the traditions that appeal to you, but to also consider the myth of the great human cauldron of dreams, from which we all dip our nourishment. It is not only blood that calls to us." 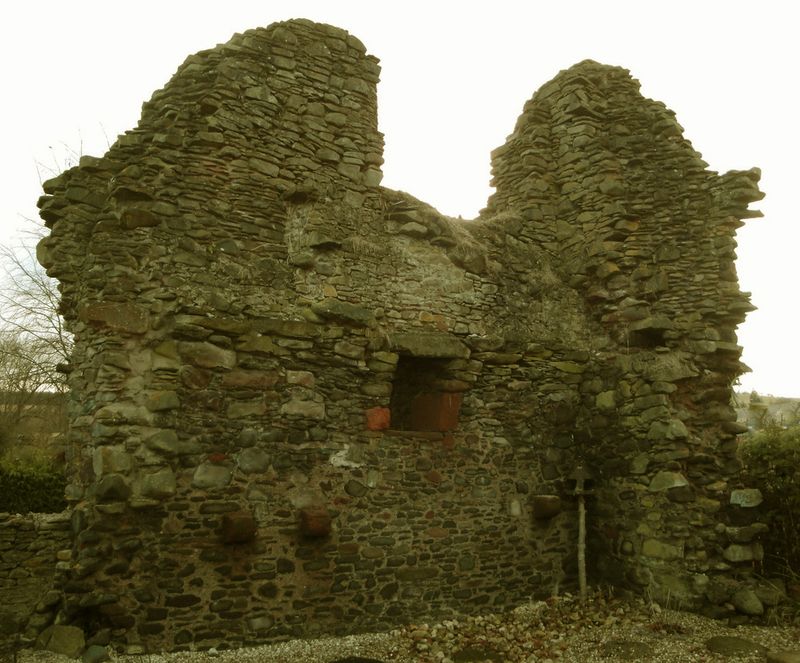 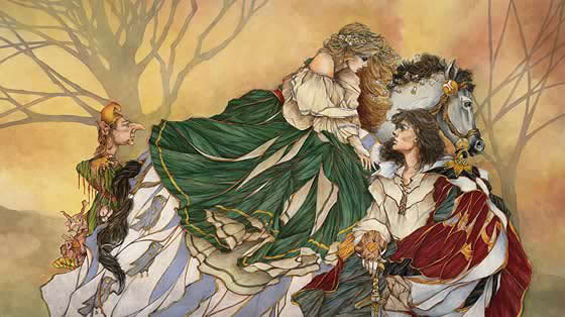 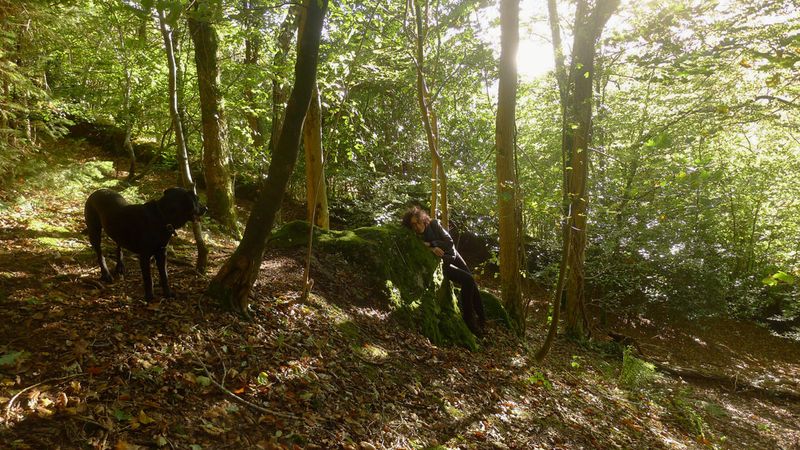 Art above: Cover art and illustrations for four of the American and foreign editions of Ellen's novel  Thomas the Rhymer -- by Kinuko Y. Craft, Folda, Janis Jaunarajs, and Thomas Canty. Photographs:the remnants of the Rhymer's Tower in Earlston, in the Scottish Border country, and Ellen & Tilly in Faerieland, 2013.

What an eminently sensible and brilliant piece of writing. I agree with every word. As for the 'call of the blood' I have so many types co-mingled in my veins that if they all called at once I'd be torn to wobbly pieces!

Oh, Terri - I'm feeling all weepy now! What an amazing May Day gift: it's not even my birthday, but I feel like it is. I had completely forgotten writing that *Brigit's Feast* article in . . . [checks files] 1999 (!!) - I'm astonished at how neatly it slides into the Diversity advocacy we've got in the field today.

Thanks for being there with me through all those years - for giving me the encouragement (and even the apartment in which) to write THOMAS THE RHYMER in 1986! It's silly, but seeing that you've kept and collected all those images from the book's various publications (not to mention that trip Jane Yolen & I took to find the Rhymer's Tower in Earlston!) feels like a mom who's kept all the trophies & awards of a cherished child. Which, as you know, means a lot to me.

What an awesome post! And I love Ellen's work. I have Thomas the Rhymer, it's a Keeper. Funny, I got on the Internet today because it was May first, and I just knew you were going to post something special. LOL. Everyone have a great month, full of magic, wild walks, and flowers.

I'm with Stuart here. Who knows how many places my blood is from... too many to matter. I love this post and Thomas the Rhymer is one of my favorite books of all time.

This is wonderful. I can relate to it in so many ways. And with what Stuart wrote in his comment also. Thank you to all those who keep the magic alive.

So this morning, I woke and remembered I dreamed I was visiting Ellen Kushner. Power of Myth and Moor.
I don't remember much but she was, of course, charming and easy to be around. I did meet her in the early 1980's at the first World Fantasy Con (in Berkley, CA,) I'd gone to. We talked as fairy tale lovers, and I admired her enthusiasm and charm. That was before THOMAS THE RHYMER. She has opened so many
door that were needful. Like Terri she has not written as much fiction as I wish for, but it's all priceless.
I feel like the cat who accidentally ended up with Queens.

Thank you, Phyllis! And Melinda. And Stuart and Edie. And Terri, again.

I have wonderful news for readers in the UK! A NEW cover joins the glorious "Thomas" art that Terri's posted here. It's by a stunning French artist, Delphine Lebourgeois, created for the British reprint of THOMAS THE RHYMER for the Gollancz "Fantasy Masterworks" series. I could not be prouder and more pleased.

Pub. date is July 9th, but it's already up on Amazon.UK for all to admire (and pre-order):