"Sam Lee is one of Britain's finest singers and the most cogent force of his generation in British folk music,"  "an heir to the great revival during the 1950s and 60s led by Martin Carthy and the Watersons, and Fairport Convention in their wake. Lee brings contemporary folk music back to whence much of it came: Roma, Gypsies and Scottish and Irish Travellers, who have passed these songs from generation to generation, over centuries. He scours Britain for those whom many avoid or despise -- travellers in camps or housed -- to learn their lore and songs. And a first collection makes up his debut album: Ground of Its Own, nominated for a Mercury award."

A second album, The Fade in Time, has just been released, and I highly recommend it.

In the video below, Lee discusses the album's genesis and examines the roots of the Traveller song "Jonny O' the Brine."

Below, he records another Traveller favorite, "Lovely Molly," with the help of the Roundhouse Choir. This old Scottish folk song is believed to date back to the early Jacobite rebellions.

Via Ed Vulliamy, here is Sam Lee's description of how he first came upon Traveller music while embarked upon a self-directed study of folk music at Cecil Sharp House, home of the English Folk Song and Dance Society:

" 'I discovered Jeannie Robertson, the great Scottish Traveller ballad singer, Harry Cox and the Copper Family -- and I wondered, who are these people? I bought their CDs and was blown away. I thought, I have to learn all these songs. There was this difference between songs the Gypsies sang and songs you learned at Cecil Sharp House,' he says. 'I love the songbooks, 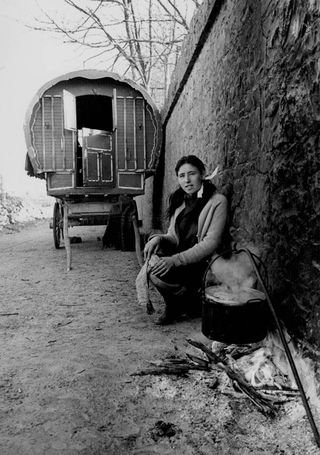 but I decided I'd rather throw flames on what tradition is left out there. The Gypsies are our Native Americans: they practice a kind of shamanism mixed with Christianity and the old beliefs.

"The glory of folk music is 'this latency -- the power within to express these things, like the power within everything, trees, plants, the inanimate.' Lee's love of song was inseparable from his love of nature and he felt this in the travellers' songs: 'I'm a tree-climber,' he says, 'and this music is for me like being up in the branches, knowing you are connected by its roots, deep into the earth.' "

"Lee's muse appears to be a kind of paganism: 'It's about respect, really, for these gods, whatever and wherever they are, and the land. When you're close to the land, respect it. Know that whatever you do, every plant you pick, will have consequences. I know that even walking through a wood has an impact, which makes me lightfooted.' Pantheism? Paganism? I ask. 'I'm hesitant to put names to it,' he replies. 'Just look for this sense of sanctity in the land and find it in song.' " 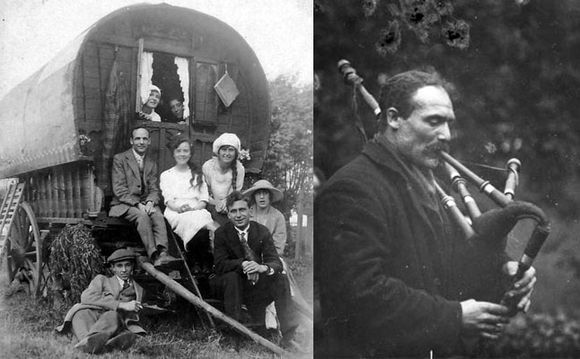 Lee often collaborates with contemporary artists drawn from multiple disciplines (dance, performance art, film, etc.), creating unusual pieces like the new video for "Blackbird," above (and his wonderfully wacky video for "The Ballad of John Collins," 2012).

"The Gainsborough Packet," below, is another collaboration: a short film by the Newcastle artist Matt Stokes, with music written by Jon Boden (of Bellowhead and the Folk Song a Day site). The film is based on an early 19th century letter (preserved in the Tyne & Wear Museums archives) by Newcastle working class hero John Bodikin, relating his colorful life story to his friend Pybus. Sam Lee plays Burdikin in the film, investing the role with sweet mischievousness.

The vintage photographs above, of an Irish Tinker, Scottish Travellers, and a Traveller piper, are from George Crawford's Paleotools blog.

Reading Jay Griffiths and listening to Sam Lee while drinking my second cup of coffee... A quiet, beautiful noontime, thanks to you (and the kid's sound sleep).

Is it simple synchronicity that Sam Lee was featured on NPR about three hours ago here in Michigan?

The packet song and the small movie is absolutely perfect. I kept thinking about how this, more than any big bang, blow-em up movie I have seen lately, gives me an amazing picture of a life well lived within an historical retrospective.

(as I said at the face book posting) Transport me to the rivers of old and wash me clean with song!

I'm on his mailing list, so I knew he was headed to America, but not that he was going to be on NPR. That's good news.