Crossing borders
Enclosure of the Commons: the borders that keep us out

In keeping to the theme of "borders," I've been thinking about musical traditions that crossed from one land to another along with immigrants, slaves, and refugees: the folk music of the British Isles, for example, which transformed into bluegrass in the eastern mountains of America, and the African rhythms that turned into American blues and gospel, and then rock-and-roll.

Cajun music is a another good example. The Cajuns of Louisiana are descended from the French (and French Métis) Acadians who settled the Canadian Maritimes, and were then forcible deported by the British in 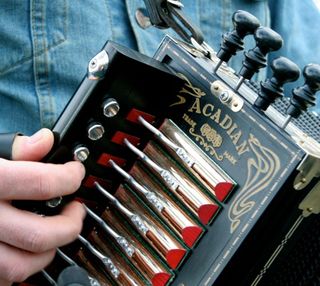 the Great Expulsion of 1755–1764. Although they were deported to a wide variety of places (some families split up and sent to different destinations), many of them eventually made their way down to Louisiana, a colony then under French control, where they settled among the French Creoles already living in the area. Cajun music evolved from the French ballads and dance tunes carried south by the Acadians -- as opposed to the multi-ethnic Creole music known as Zydeco, which evolved from a blend of French, African American, Native American, Spanish, and other influences.

Above: Michael Doucet, from the great Cajun band BeauSoleil, performs "Eunice Two-step," a Cajun classic, for the BBC's TransAtlantic Sessions program in 2012, accompanied by Aly Bain, Jerry Douglas, Sharon Shannon, Russ Barenberg, and others. Doucet comes from Lafayette, Louisiana, and has been performing with BeauSoleil since 1977.

Below: "Let's Talk About Drinking, Not About Getting Married" by the Pine Leaf Boys, from southern Lousiana. They've released seven albums to date, the most recent being Danser (2013).

Above: "Les Oiseaux Vont Chante" by The Red Stick Ramblers, from Baton Rouge. The band formed in 1999, released eight wonderful albums of Cajun and Western Swing, and disbanded in 2006. Several members then went on to create The Revelers, along with members of The Pine Leaf Boys.

Below: "Blue Moon Special" performed by The Lost Bayou Ramblers, from Broussard, Arnaudville, and New Orleans, who play an energetic mix of Cajun, Zydeco, Western Swing and Rock-&-Roll -- primarily in French, though this particular song is sung in both French and English. They've released eight albums and EPs, the most recent being Gasa Gasa Live (2014).

I'm afraid my choice of music today (limited to songs for which good videos exist) might give the impression that Cajun musicians are exclusively white and male -- which is not at all the case, although you'll certainly find a much stronger black presence on the Zydeco end of Lousiana's music scene. Notable women playing Cajun music include Ann Savoy, Lisa Haley, Cheryl Cormier, The Magnolia Sisters, and Rosie Ledet...plus, of course, the great Queen Ida over on the Zydeco side.

Let's end today with Cedric Watson and his band, Bijou Creole, who play a mix of Cajun and Zydeco. The video below was filmed at the Festival de Pontchartrain earlier this year, where they were joined by Désirée Champagne, on vocals and washboard. (The title of the song is unlisted.) Although Watson hails from San Felipe, Texas, he's been immersed in Creole music since he was 19, and is now based in Lafayette, Louisiana. His aim is to "resurrect the ancient sounds of the French and Spanish contra dance and bourré alongside the spiritual rhythms of the Congo tribes of West Africa, who were sold as slaves in the Carribean and Louisiana by the French and Spanish," playing everything from forgotten Creole melodies to modern Cajun and Zydeco songs.

Whenever non-Americans casually dismiss American culture based on media-promulgated stereotypes, I always want to ask: "But which America?" Hollywood and Fox News are no more representative of our enormous and diverse country than any of its thousands of other parts. Cajun and Creole culture are America too, and one reason (among many) why I still love it so much.

At least 25 years ago we went to see groups like Beausoleil at a Cajun/Zydeco event at one of the big Pier 39 halls in San Francisco. I had the chance to talk a little about the music with one of the black zydeco fiddlers in his mid-fifties, and I'm very sorry to say I do not recall his name now. He explained that Cajun music tended (at that time) to be more rural musicians using traditional folk instruments, always in French, always white musicians. He said Cajuns would not use new instruments or import new forms from rock music in the way zydeco was starting to do. He said zydeco was black community music much more familiar with blues, rock, and jazz music and the dancers were much more open to new riffs with electric guitars and amplified keyboards (just getting more affordable then, often used more like accordians). He also explained combining the two styles at one venue that weekend was a strange West Coast idea, that back home in Louisiana they would never combine the two communities or styles at the same venue. He explained gently that there was a pretty strict color line going on back home and the music was strictly divided too. He said zydeco only startling to merge a little bit into Cajun crossovers with the younger guys. (Now I think Michael Doucet and Beausoleil at the time were radical Cajun newbies picking up really old songs as well as from different other traditions like Breton folk tunes.)
He thought it might be a long time before any sort of combination might happen. I remember being very sad about this because I could see both how dynamic the zydeco dances were, and how extremely skilled the bluegrass-style Cajun fiddle and guitar and banjo players were, and how terrific it could be to combine the skills.
I also recall how cautious and careful he was in interacting with me, to make it very clear to everyone nearby that he was respectful and not intrusive and waiting on my questions as long as I wanted to ask. I have to say it was a jolt for this West Coast mixed-neighborhood kid, I must say.

Per my earlier comment, this is why it makes me almost tearful to see these vids. They're combining the two streams of tradition.
I can't tell you how much I love seeing that.
Also, I find zydeco is terrific working music, whether sitting at the computer or lifting and hauling and wiping and etc. You need to get something done, this will get me cheered up and *moving*.
Thank you for bring me these new bands to enjoy.

As a Canadian musician living in the Maritimes, of English/Scottish/Métis decent, I loved this post so much. The history of our region is tragic in this regard and the flowering of Acadian music and culture in Louisiana is a thing of wonder. I love this music and have taken many trips down south to seek it out. I love that Myth & Moor may be spreading the music to new listeners.

Heather - yes, Cajun music has been changing with the new generations and though the color separation wasn't absolute even 25 years ago it has certainly changed and keeps changing. There are lots of venues & festivals now that support both Cajun & Zydeco and more musicians now who play both. There are old school purists in this and any musical tradition wary of some of the new Cajun influences - instruments borrowed from western swing and R&B etc - we see this wariness in my field of Celtic folk music too - but its the nature of folk music to change and evolve and you can't keep music locked away and unchanging in a museum any more than you can keep the folk themselves, ourselves, locked away.

There are several different strands now of Cajun music from traditional Cajun to western swing cajun, dancehall Cajun, contemporary Cajun, even a bit of punk Cajun, and I think it's all great. Yet an elderly musician friend of mine in Baton Rouge would disagree loudly with that being a dyed in the wool musical historian and purist, even Michael Doucet is too radical for this old boy. But then he'd offer me a beer, get out his fiddle, and we'd forget our differences and play.