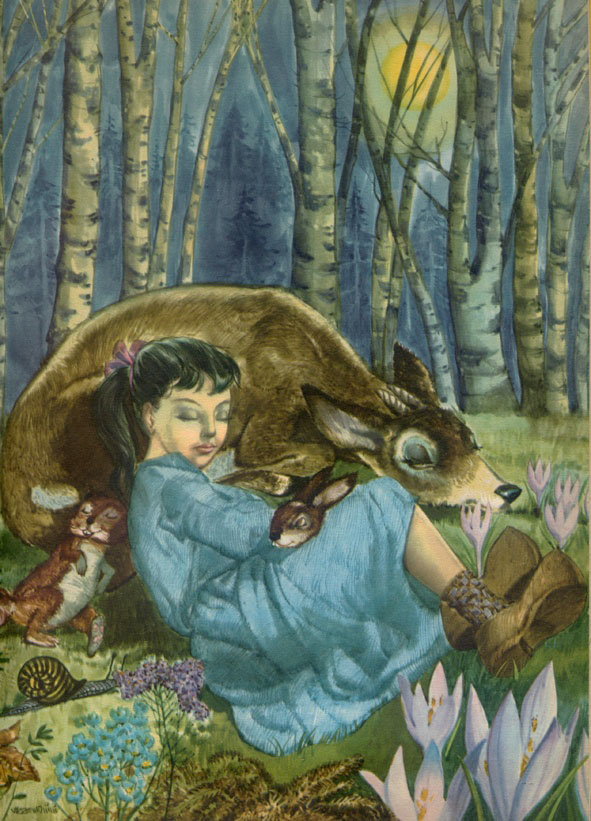 I have another deer poem for you today, a psalm for the wild ones of the forest. 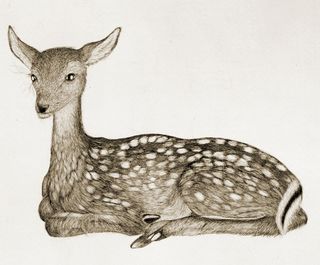 The enchanted deer in the pictures above and below come from two classic French fairy volumes. Above is "Brother and Sister" from Les contes de Grimm, illustrated by Cremonini (Editions Fabbri, 1965). Below is "Bright, Dear Deer, and Kit" from Le livre des bêtes enchantées, illustrated by Adrienne Ségur (Flammarion, 1956). Selections from Le livre des bêtes enchantées and an earlier volume, Il était une fois, were published in the U.S. as The Golden Book of Fairy Tales, translated by Marie Ponsot (Golden Books, 1958).

The illustration on the right is "Fawn," by the German-American artist Kiki Smith. Alas, I have no idea where the final photograph is from...but isn't it marvelous? 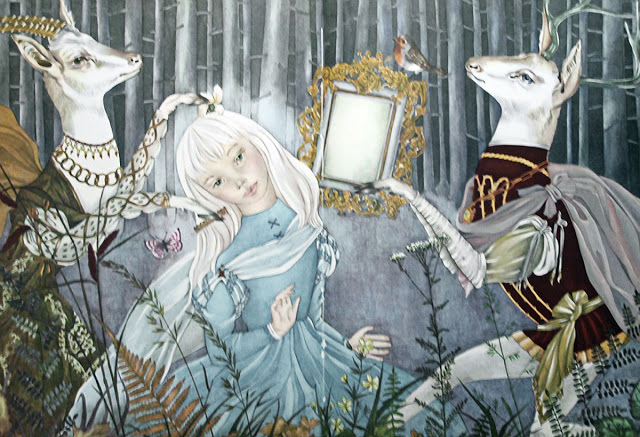 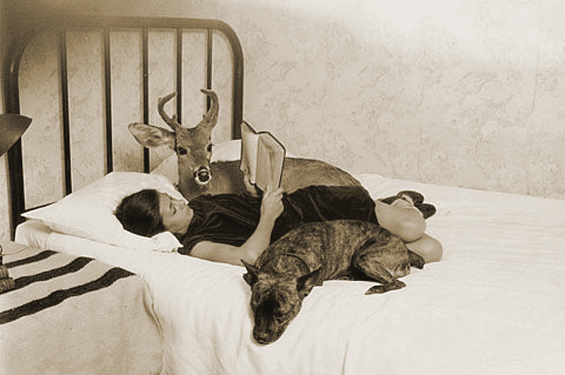 My favourite deer poem is Mary Oliver's Five A.M. in the Pine Wood. I know you'll know it, Terri, but here's a link in case anyone here doesn't.

I love enchanted deer tales, particularly The White Deer...which is French, I think? Has anyone written poetry based on it?

Yes, the White Deer is French, written by Madame D'Aulnoy in the 17th century. It's one of my favorites too. More info on D'Aulnoy and the other French salon fairy tale writers here:

The only White Deer poem I can think of off-hand is this lovely one by Eve Sweetser, "The White Hind at Bay" :

I had a quick look in the "Disechantments" and "Poets' Grimm" anthologies of fairy tale poems, and neither lists any White Deer poems.

I can't remember if there were any in the deer-themed Poetry Challenge a while back, but it's worth a look:

A recent Guardian Poem-of-the-Week (for October 5) featured a lovely poem by Kathleen Jamie, "The Hinds," from her new collection The Bonniest Companie.
http://www.theguardian.com/books/booksblog/2015/oct/05/poem-of-the-week-the-hinds-by-kathleen-jamie

I grew up with that ethereal painting of "Bright, Dear Deer & Kit" by Adrienne Ségur in my well worn copy of The Golden Book of Fairy Tales, I know who you remind me of now!

I grew up with Ségur's Golden Book of Fairy Tales too, and so did Wendy Froud, Ellen Steiber (author of A Rumour of Gems) and a number of other women who were profoundly effected by it and grew up to work in, or love, the field of fantasy & mythic artists. We call it the Ségur Sisterhood. (I haven't yet met a Ségur brother.) Welcome to the Sisterhood, Mo!

I wrote about my attachment to the book in this essay, originally published in the second, expanded edition of Mirror, Mirror on the Wall: Women Writers Explore Their Favorite Fairy Tales, edited by Kate Bernheimer. Trigger-waring: it's something of a dark essay:

That's a wonderful poem. Thank you for link, Glenda.

I have a magical tale of a deer (stag, actually) I could relate. Not sure if it's a bit long for this format. Around 600 words. Lest me know...