Gift exchange (and the making of art)

In the hush of a winter morning on Dartmoor, as we move gently into a new week and new year, I'd like to re-visit the music of Italian pianist and composer Ludovico Einaudi, reflecting on themes of time and change. Einaudi was raised in Turin, studied at the Conservatorio Verdi in Milan, and now resides Torino, creating works in the intersitices between classical music and other genres and art forms.

The video above was filmed for "Walk," an exquisite song from Einaudi's In a Time Lapse (2013).

In the video below, the composer discusses his creative process, noting similarities between the construction of an album and the reading or writing of a novel.

Below: "Divenire," from Einaudi's 2006 album of the same name, on the theme of "becoming." The performance was filmed in the Palazzo Te in Mantova, Italy.

And last: Einaudi discusses the inspiration behind his gorgeous new album, Elements (2015).

At this time of year, it is dark when I climb the path to the studio each morning. The cabin rattles with every wind; the stream behind it is roaring, swollen with rain. I switch on a lamp, turn on the stereo, and Einaudi's music blends into the song of the storm. Tilly circles, then settles beside me; coffee steams in my cup; and a new day begins.

"It's only when we become aware or are reminded that our time is limited that we can channel our energy into truly living," Einaudi once said.

The difficult year that I've just left behind has been an all-too-effective reminder that life and time are limited indeed, but today a brand new year lies before us. It's an empty white page, a blank canvas, a fresh notebook.

An invitation to possibility. 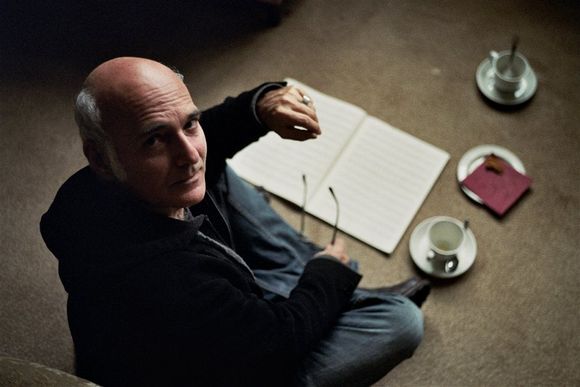 An invitation to possibility

Turn the page of this new year.
Take up the pen.
Plunge it deep into the heart
of your matter.

The matter of living,
the heart of it all,
the newness of the year,
this pen's spit and spatter,

as it stutters across the page,
are all that matters.
The heart knows the heat,
the cold, the pen, the year,

and that you are still here.

Yes, still here. I am. You are.
We are the anything's possible.

Such beautiful music...I'm listening on repeat. Happy New Year, Terri, may this one be full of extra 'spoons' for you.

Thanks for the invitation. The music moves me.
Happy creating.......

Such music! I've requested all three of his cds in my library's collection. Thank you, Terri. And both you and Jane for the call to beginnings.
Turn the page of this new year.
Take up the pen.
Plunge it deep into the heart
of your matter.

My characters woke me several times in the night with subtle changes to yesterday's work--the game is afoot!

Yes, yes. Thank you for the beautiful music, the inspiration, the examples and reminders of life's endings and new pages. Happy New Year from our woods to yours Terri, and to all who come to these Myth and Moor pages!

Last time, you came calling
glaze-eyed over the grassland,
dragging past its Doric columns
of cacti. Their wrens molting prayer.
.
You were the pre-cursor of shock
and shadows cast by places and strangers
you feared for us to know.

You wept in the middle of seasons
as dirt sifted through your hands
and water flowed elsewhere
pumping rain through a muscle of mud.
The eastern veins of river or stream.

This time, you come calling
wide-eyed through the wilderness
holding your hand open
to whatever wind or bird swoops in.

You could know everything
but have chosen nothing Your vocals unstrung -
out of tune, out of hope
for inviting better, breathable
possibilities to come.

You write with such eloquence about "inviting possibility"
and turning that page. The message uplifts and these lines are sublime and so valid!

The matter of living,
the heart of it all,
the newness of the year,
this pen's spit and spatter,

as it stutters across the page,
are all that matters.

Hypnotically bittersweet. Almost funereal but laced with hope like the first new buds of Spring. Such a lovely and interesting piece.

Thanks so much Jane

For taking the time to read and comment on my poem!
I deeply appreciate and am so glad the opening stanza's image worked!

This one is going on The Door immediately. xoxoxo

Oh indeed we are. I hope 2016 proves to be a splendid year for you, Michelle.

I love this. Damn it, Wendy, I want a book of your work so I can pull it from the shelves on rainy Dartmoor mornings and lose myself in your desert words.

Thanks all--and of course always thanks for Terri for inspiring us all.

Thank you so much and I deeply appreciate the encouragement. Am working on that project and going through the poems I want to include and editing those which need to be edited!

Again, many thanks!
Take care and Many Blessings to you!
Wendy

What better way to start the New Year than being introduced to the music of Ludovico Einaudi and beautiful poetry.
Thank you