Today, music from the Songs of Separation project: the brainchild of folk musician Jenny Hill, conceived during the contentious run-up to the referendum for Scottish independence. Hill's idea was to bring ten English and Scottish women folk musicians to a fairy tale island off Scotland's west coast to create an album reflecting on "separation" in its many forms.

"Celebrating the similarities and differences in our musical, linguistic and cultural heritage," she writes, "and set in the context of a post-referendum world, the work aims to evoke emotional responses and prompt new thinking about the issue of separation as it occurs in all our lives. The collected songs aim to get to the heart of what we feel when we are faced with a separation, both good and bad."

The musicians (along with Jen Hill) are: Hazel Askew, Jenn Butterworth, Eliza Carthy, Hannah James, Mary Macmaster, Karine Polwart,  Hannah Read, Rowan Rheingans, and Kate Young. They spent an intensive week planning, rehearsing, and recording the album on Isle of Eigg in June 2015 -- including recordings made at the two sites central to the ‘Big Women of Eigg’ legend.

Above: A short video on the making of Songs of Separation, which includes fascinating discussion on the project's theme, on the creative process, and on the role of folk arts in society -- a perfect combination for Myth & Moor.

Below: An even shorter video from project's video diary, documenting a group sing, in Gaelic, with the Isle of Eigg community, along with a glimpse of that beautiful landscape. (You can view the other "Daily Reflection" videos on the project's YouTube channel.)

Next, two songs from the album itself.

Above: "Echo Mocks the Corncrake," featuring Karine Polwart. As Helen Gregory notes in her insightful review of the album, this traditional song "contains subtle political content and references to at least two forms of separation, even though it’s often thought of as a simple love song. The lyric tells of a young man whose partner leaves him for the bright lights of Ayr (located on 'the banks o’ Doune'), an act of separation which is one manifestation of the rural depopulation occurring as a result of the impact of the spread of industrialisation during the 18th and 19th centuries, further exacerbated in Scotland by the greed-fuelled brutality of the Highland Clearances. And the corncrake? The subject of the separation of humankind from the natural environment is key: habitat loss has meant that the numbers of this migratory bird have declined across the British Isles since the mid-19th century. Consequently, corncrakes are now restricted to Ireland and the northern and western islands of Scotland including, of course, the Isle of Eigg. So it’s fitting that 'Echo Mocks The Corncrake’ opens with a field recording of the bird’s distinctive krek krek call which sets the rhythm of the piece, picked up by percussive beats on a variety of instruments ahead of Karine’s vocals."

Below: "It was A' for our Rightfu' King," written by Robert Burns in the 18th century, arranged here by Hannah Read. "The song is inspired by the failed Jacobite uprising of 1745, lead by Prince Charles Edward Stuart (1720 - 1788)," explains Pauline MacKay. "The Jacobites sought to restore the deposed Stuart dynasty to the Scottish and English throne. The Jacobites were defeated at the battle of Culloden in 1746, forcing Bonnie Prince Charlie to flee to the highlands. He eventually reached Europe where he died in exile (in Rome). In this song a young woman laments the failure of the uprising and her Jacobite lover's absence from Scotland."

For those of us who have been following the project since it was first announced, the good news is that the album has now been released, and has proven well worth the wait. For those new to the project, you'll find more information on the Songs of Separation website, and updates on their Facebook page.

There's also a concert tour in the works -- but if you can't make it to any of the tour locations, perhaps you'd like to help someone else attend through a random act of musical kindness. (I'm assuming they'll continue to run the "Save Our Seats" program for other venues on the tour, though it's not listed on the website yet.) 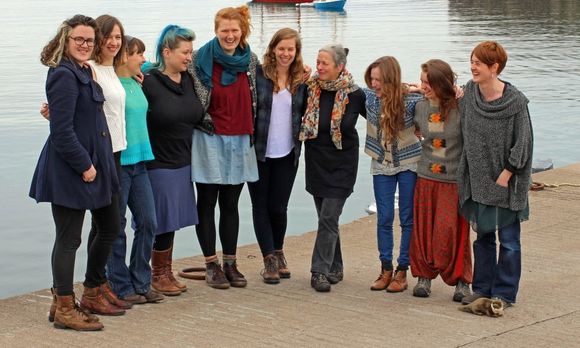 I remember our chasing after a corncrake on Uist and David staying behind as I and our friends went to sleep on the boat. (It was Sunday so the ferry didn't make the crossing till Monday morning. Religion once again getting in the way of sense.) And he returned triumphantly just before the five o'clock deadline having found several corncrakes and happily let Ron drive as he was dead tired from the effortof finding the birds.

A creak of a bird,
sound of adoor opening,
into another time.

You off on your own,
some sleepy farmyard,
while I restless on the boat.

The memory of the corncrake,
my mind's creak,
when we were so alive.

The moon over Uist,
a large silver coin,
ghosting.

I wish I were there now,
following you
through that other door.

Beautiful, Jane. And heartbreaking too, making me miss David this morning, and the two of you together.

Perfect set of tunes for this hard Winter on the planet....

I love music Mondays, but I found this one really special. Gorgeous!

This project is sublime and the songs exquisite in its utmost form!! I love the subject matter (separation in its many forms) and the instrumentals as well as the lyrics. These haunt with beauty, longing and intensity. Several years ago, when in New York, I listened to a radio show called "The Thistle and Shamrock" hour which featured, Celtic songs, Scottish tunes and other folkloric music related to the islands including Breton in Northern France. I was always mesmerized by the quality of theme, voice and implementation of those things with the music.

One program featured the history and songs of war in the 17th and 18th centuries. Much like you are discussing here. They talked of
being separated from a loved one, the worry, the pain, the longing and the possibility of "return". It was more like the anticipation on the part of the lonely wife or girl friend. What she would ask and imagine in her mind about the forthcoming day or time when he returned. It was her way of transcending the fear and coping in the moment. Separation is a process of adjusting to absence ( with all its dark implications)as well as hoping for reuniting or meeting again in the middle of the journey. Inspired by some of the songs I heard then and some of the poems put to music, I wrote this piece along the same thematic lines. A woman anticipating the eventual return of her lover or husband, asking if she has done all the necessary things to prepare for his coming. If she has listened outside, in nature, for signs that the war has ended, for a cleansing of time and place.

The sun is down, have you laid out

fresh linens and the box

with his letters and seashells found

along the sand or tide pool rocks?

The sun is down, have you undone

the buttons of your dress

and for him, brushed into shine

The sun is down, have you relit

the candles and poured some wine,

and with love, unlatched a window

to scent the room with rose and pine?

The sun is down, so have you heard

the night bird as she calls

farewell to flintlock and drum?

Beautiful in the fullest sense of the word!! I adore the way you work the song or sound of the concrake into the opening of a door, another memory and time. The poem haunts with both its language and presence of that vital bird --

The memory of the corncrake,
my mind's creak,
when we were so alive.

The moon over Uist,
a large silver coin,
ghosting.

I also think of that lovely " large silver coin ghosting" as a payment of passage into a time/dimension beyond the present and earthly confines. A spiritual currency of sorts. Anyway, as you can tell, I love the entire poem. Its beautiful poignancy touches deeply!

Oh my, that's beautiful, though I read it as if she were preparing for his ghost to visit. I certainly hope someone sets this to music. It is a true song.

A poem , in my opinion, is left open to interpretation and to what each reader sees or feels in its content. It could very well be his ghost, and why not? That would make the song even more haunting. Thank you so much for your kind words and interest in this poem. I deeply appreciate it.

So glad you enjoyed this poem; and I deeply appreciate your kind words!