The Deepwood
Tunes for a Monday Morning 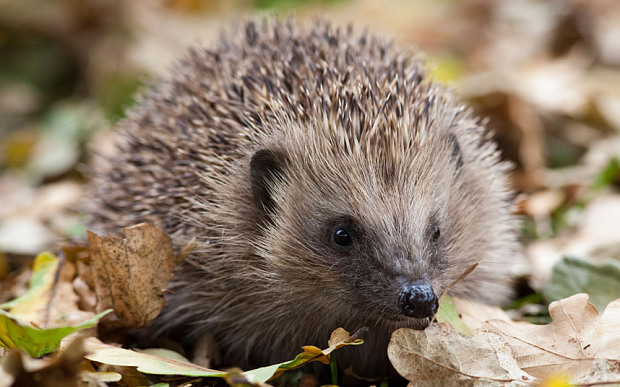 It's Hedgehog Awareness Week, sponsored by the British Hedgehog Preservation Society. I adore hedgehogs, so here is some of my favorite pieces of hedgehog art. (The artists are identified in the picture captions; run your cursor over the images to see them.) 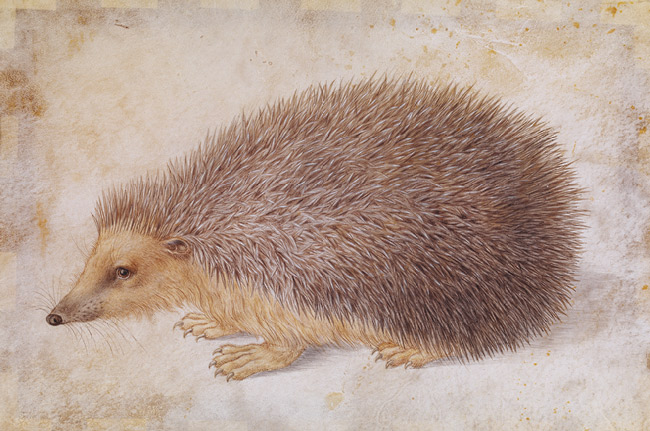 "Artistotle says that hedgehogs can foretell a change of wind," writes mythologist J.C. Cooper, "and accordingly 'shift the outlook of their earth-holes.' Pliny and Aelian go further, maintaining that hedgehogs have two holes, North and South, and block one or the other as the wind changes. Other beliefs were that the animal  uses its spines to take the shock if it falls from a height, also that it collects grapes on its spines by rolling on them, then takes them home for winter storage. Plutarch says he had seen this done, the creature 'looking like a bunch of grapes shuffling along the ground, so thickly covered was the animal with its booty.' The Beastiaries used this belief to illustrate 'finding the True Vine of Christ,' though the act of stealing the grapes was 'the Devil robbing men of their souls' -- in general in Christianity the hedgehog depicted the Evil One and evil-doing.

"In early times the hedgehog was generally a symbol of the Great Mother, but in particular it was the symbol of the Sumerian Ishtar. Irish lore associated the hedgehog with witches who could take its form to suck cows dry. In China it also had a sinister reputation as one of the Five Animals [along with Fox, Weasel, Snake, and Rat, sacred but not to be trifled with]." 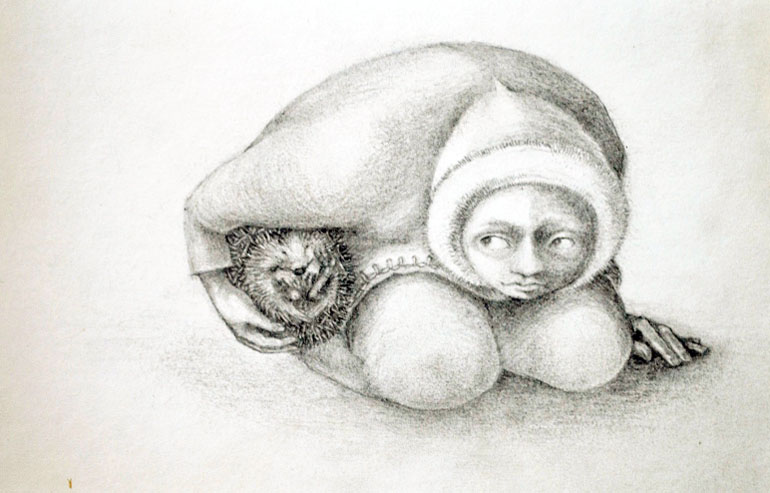 Hedgehogs play a more postive role in the fairy tale tradition, where they appear as Animal Guides, Animal Brides/Bridegrooms, and revenants of wise and gentle nature. 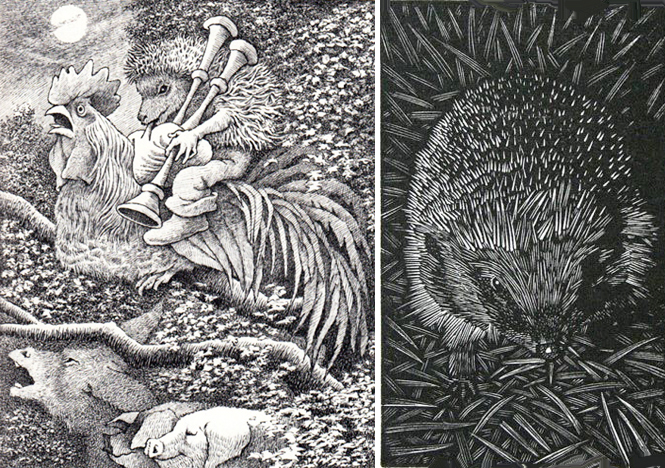 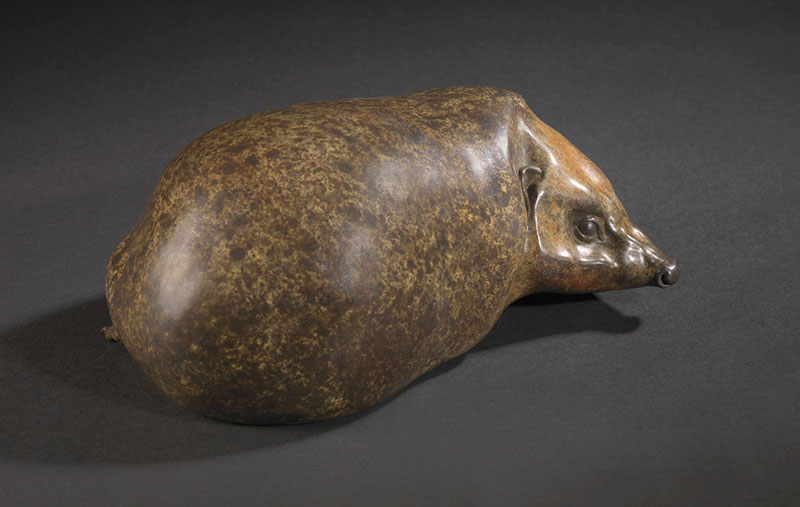 In Slavic tales in particular, notes Margaryta Golovchenko, hedgehogs are the keepers of knowledge and order and embodiments of magical power:

"The Slovenian duhovin, for instance, is a version of the bewitched child, possessing special abilities and qualities, and appearing with the body of an animal such as a snake, hedgehog, or raven.  And, in the Soviet animated film Ezhik v tumane /Hedgehog in the Fog (1975), Hedgehog is the bridge between the conscious and the dream world, evoking sympathy from the audience as they watch him lost in a thick mist, chasing after the mirage of a white horse in the clouds. 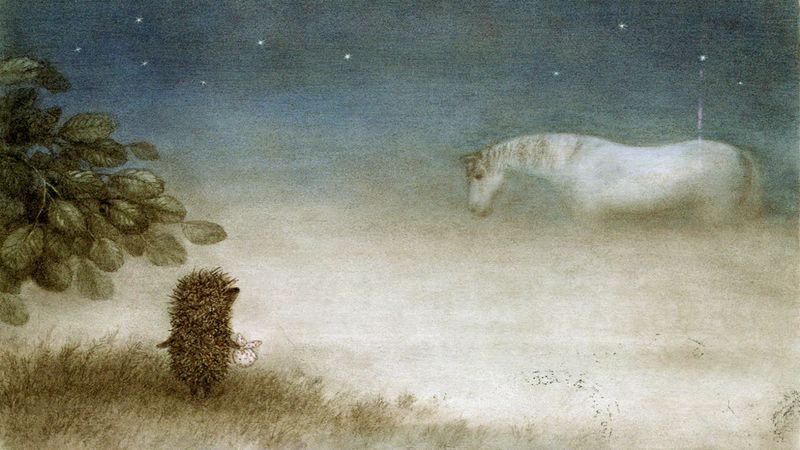 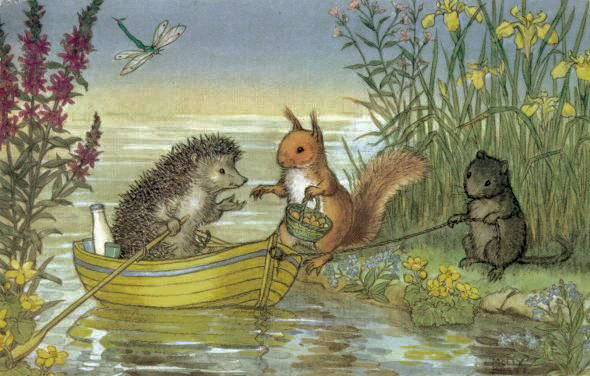 "Perhaps the infrequency of hedgehogs in other cultural stories speaks to a unique characteristic of Slavic culture -- the stereotypically cold exterior of the Slavic people gives way to a wise and kind nature. Initially, the hedgehog’s kind personality might seem difficult to find under his intimidating façade. For the persistent reader who takes the time to discover more about him in Slavic tales, however, the hedgehog serves as a reminder that wisdom, kindness, and courage come in various forms." 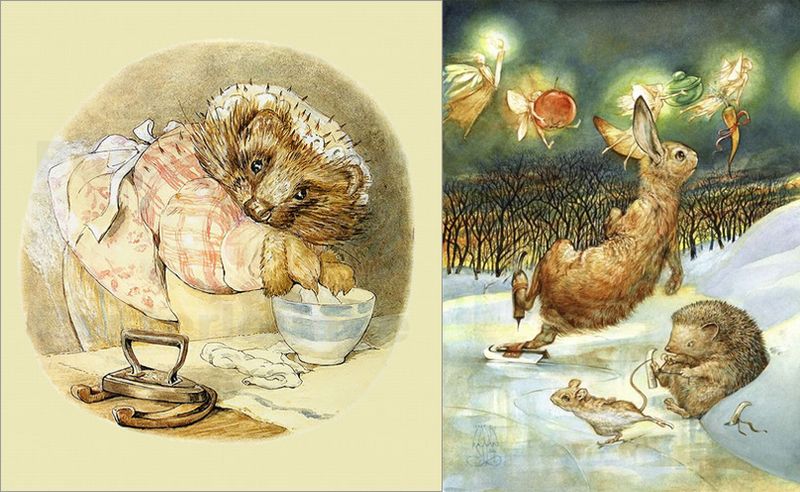 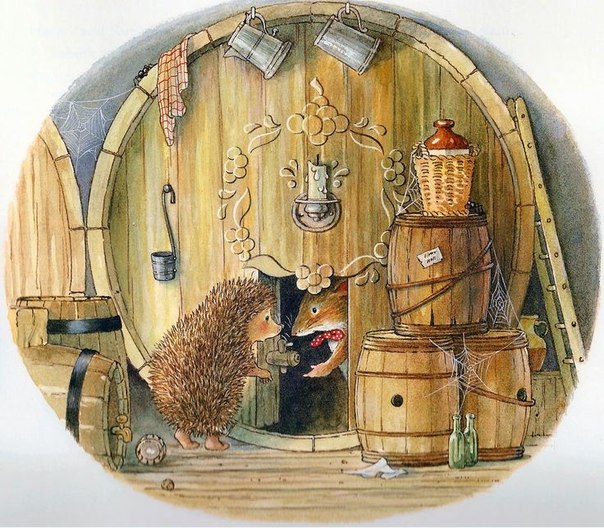 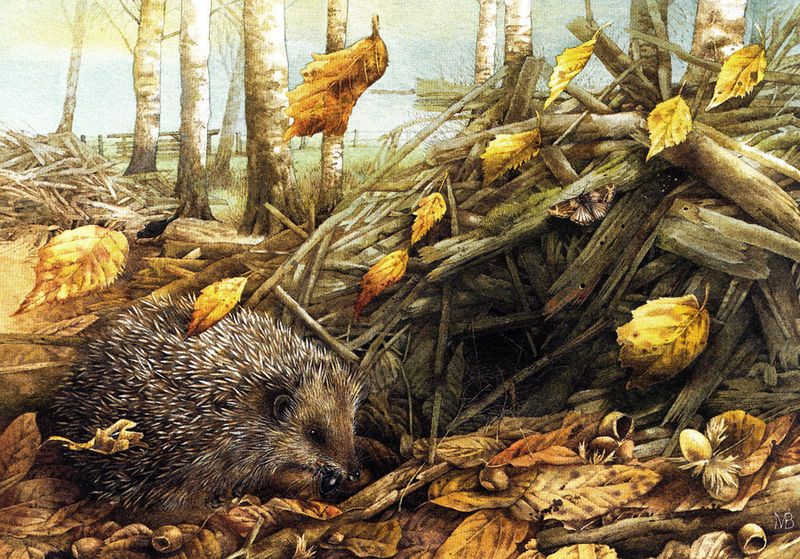 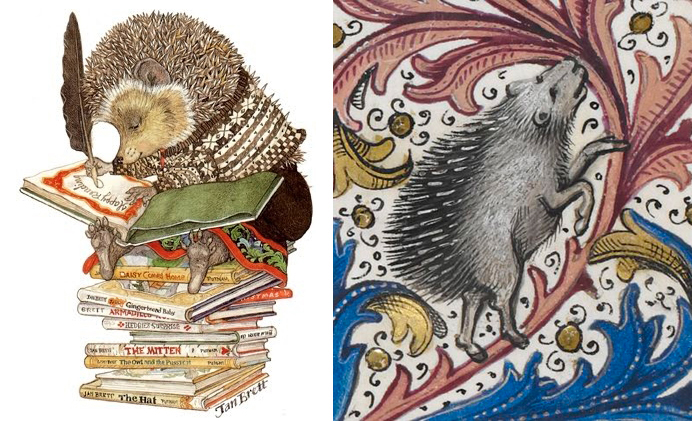 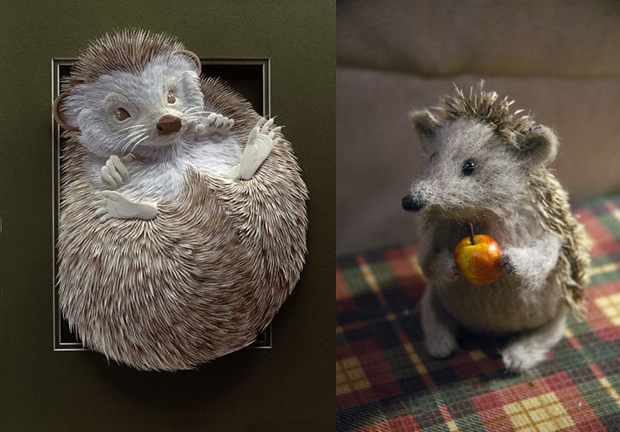 The J.C. Cooper quote is from Symbolic & Mythological Animals (HarperCollins, 1992). The Margaryta Golovchenko quote is from an essay published by Tiny Donkey/The Fairy Tale Review (March, 2016). All rights reserved by the authors & artists.

Beautiful post. When I was a child, my father was forever rescuing hedgehogs from the cold or possible misfortune, making warm nests for them in boxes, carrying them to safe places. I have loved them ever since.

As we have been warned of the possibility of a plague of slugs after such a mild winter, we desperately need armies of hungry hedgehogs now!
A couple of years ago we were visited by a hedgehog several times. The cats were completely nonplussed by this bumbling barrel of a creature that was so well defended by its armoury of spines. The fact it wasn't afraid of them was something they couldn't handle and they retreated to a safe distance from where they spat and hurled cat-insults.
As the Ancient Greek poet Archilochus said: "The fox has many tricks, The hedgehog just one...one good one"

(Should any purists object to the quote, I can only say that I've seen many translations of this fragment but I prefer this version that I dredged up from distant memories of my Lyric poetry lectures at university.)

It is Monday, the wind from the south,
And hedgehog shifts his door.
No whistling down into this hole.
The babies must have it still.

Tuesday, the chill from the north,
He shifts the door again.
Mama’s quills have tested the air,
Too loud for a lullaby.

Wednesday through Saturday
There’s no need to shift.
Both doorways and airways
silent as a catacomb.

Sunday the hedgehogs pray,
Their prickly backs hunched,
Looking like monks
On a particularly bad day.

You didn’t know hedgehogs
Put their little feet together
In prayer? If they can move
Doorways to stay the wind,

They can wind their edgy minds
Around a prickly Creator,
Begging him to temper
The windlash of His will.

Jane, I so love that poem! And the art in this post is so charming.

Some wonderful art and information here! I had never heard any of these hedgehog legends; thanks for sharing them here.

I love these Terri. We have Mr and Mrs in the garden, much to the consternation of the cat. They have made it safely through the winter and we have our fingers crossed for hoglets. My other half adores hedgehogs and is convinced his daemon or familiar is one. Duly he asked for one for his birthday. It taxed the crafting brain cells and the needle felt fingers but he got what he asked for. I think I may have to gift him this post too.

What a lovely childhood image, Sarah. I didn't see my first hedgehog in the wild until I was an adult living here in Devon.

That quote often gets attributed to Ralph Waldo Emerson, the American essayist. I didn't know it's actually from the poet Archilochus. Very nice to learn something new; thanks!

Oh, I adore this, Jane. Beautiful language, and the imagery it conjurs is just wonderful.

A hedgehog daemon!!!! He must be a very special man.

I'm so sorry, I accidently deleted your comment, when I was attempting to delete a misspelled comment of my own! My finger slipped and I deleted the wrong one. My sincere apologies. I'm unable to retrieve the comment to re-publish it, but I can at least reproduce it:

And here's my reply:

Thank you so much for the link, Hugh. I *love* Reaktion Books' Animal Series. I've got six or seven volumes of them now (my aim is to collect them all as funds permit), but I haven't read your Hedgehog volume yet. I'll put that next on the list! I look forward to learning more about this fascinating animal.

Thank you for such wonderful information and imagery.
Last summer during the Lavender Festival here on the Olympic Peninsula, Washington, I met a Ukrainian woodcarver, Vlad Husarovskyi, carving pieces of found wood. He had mostly rabbits, a few bears and one standing hedgehog carrying a walking stick.
I was half across the lavender fields when I knew I couldn't leave without that hedgehog with his shorts, his smile and his walking stick.
Since then I have been reading about hedgehogs and their mythic past, which is why I appreciated this post and the other information it points too.

Thanks, Terri for Hugh's blog link...I really am enjoying it! (of course Hedgehogs would vote Green, in the UK, but what about over here in the US?) :)

Hi from the Isle of Skye, Scotland! As is often the case, a wee bit of serendipidy has brought me to your beautiful blog. My wife and I are care home musicians and both writers of one sort or another - our band (well duo) name is Biorachan Beag, which is a folktale version of "feòragan", Gaelic for Little Squirrels! I'd like to show you an Irish Gaelic version of a poem I originally composed in Scottish - a wee satire making use of hedgehogs! Hope you like it.......................

You've surely heard?
After being put there
We're being put out again
Having reached clan proportions
In beautiful Uist
Since eons!
Where will my children go
My race and my people?
Perhaps flitting is our fate
Whatever day it takes place -
A proverb doesn't care anyway.
But if that is our fate,
Let me try the tricks of Donald Macintyre,
And make entreaty on behalf of my people.
Perhaps we'll get put to the School of Scottish Studies -
That's the place we'd never move from:
Just like everything else there!
Or what about the offices of the New Parliament
If they ever get finished?
Our lives are wretched
Being chucked out
Like the Tinkerfolk after Culloden
Like the Highlanders after the Lowlanders.

Or will we be sent across to Ireland?
That land's Gaels would heed our calls:
"Grace O' Malley crossing the brine"
Would struggle on our behalf!

Or why don't we apply
To the Arts Council
For a grant?
There has never been better art
Than the skilled art of Hedgehogs!
We have eaten birds' eggs
And left them in silly bits
So you'd think they were modern art -
Worthy of the Tate!
But
At the end of the day
I fear you won't listen
Any more than Rob Donn Mackay's people listened -
To what your poet recommended,
Red-haired Donald from Uist of the Hedgehogs
Concerning God's poor creatures.

O clan of the beautiful Hedgehogs
No Foreigner, Lowlander or Norseman
We need fear tonight
But the views of so-called conservationists
Who will clear us off tonight.

I suspect you have more than plenty of books in your personal "To Read Someday" pile, but may I suggest one more title? Once upon a time, this book quite literally saved my life.

The Elegance of the Hedgehog by Muriel Barbery, translated by Alison Anderson.

I also highly recommend Muriel Barbery's newest book too, though I'm only halfway through: The Life of Elves. Once again, working with the same translator, creating a Magic that surpasses language.

Much love and peace to you and yours!

'O clan of the beautiful Hedgehogs'!

What a charming poem -- as well as a sad one. And a funny one too -- some of the political references made me laugh and wince at the same time. (The Arts Council is hard enough to deal with for us humans, let alone the hedgehogs!) It's a lovely tribute to these wonderful creatures. Thank you for coming through cyberspace from the Isle of Sky and sharing it with us here.

I've read Elegance of the Hedgehog, and I adore it. It's very nice to know I'm not the only Barbery fan here!

I don't have The Life of Elves though, which is going immediately on the To Read list. Thank you for alerting me to it, Candice.

Hail Holyhog,
Mighty and wise!
May thy merciful spines
Defend us from predation
And thy loving underbelly
Snuggle us against the cold.

Hail Holyhog,
Mighty and wise!
Give us this day
Our daily wormbrood
As we leave scat
To the fertile Earth.

Hail Holyhog,
Mighty and wise!
May we surrender without fear
To the long Winter Sleep
And have faith
In the Spring Awakening.

Hail Holyhog,
Mighty and Wise!
Keep us safe
On the road crossings
And defend us from
hungry badgers.

Hail Holyhog,
Mighty and wise!
Help us to forgive
The foolishness of men
As the worm
Forgives the plough.

Such a lovely collection of hedgehogs. I love to hear them snuffling and sneezing around the garden. The Nick Bibby sculpture is a real treat!