Tunes for a Monday Morning
On moving forward through difficult times, part two: Walking Among Miracles

That's the Way to Do It 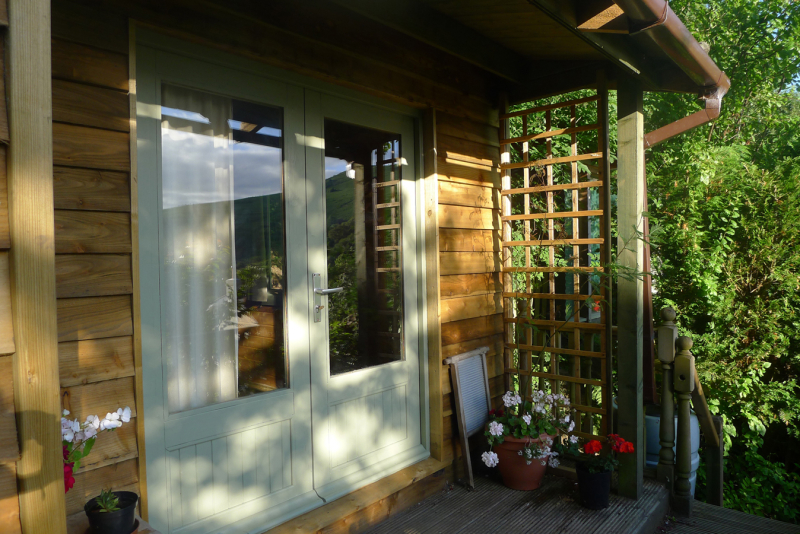 At the back of our garden, up against the woods, is the two-room cabin where Howard has his office and a small theatre studio. My own studio is not far away, so I often hear a variety of sounds drifting over the hedge between us: it might be music practice...or the growls of gnomes...or the Hedgespoken team planning works of wild hedgerow theatre for their travelling stage. Or the odd "swazzle" voice of the puppet Mr. Punch: contrary and rude, making merry mayhem.

Howard's studio has been used for puppetry performances before, but right now it's a vibrant, bustling workshop as he puts a new Punch & Judy show together. Puppet heads are scattered across tables and shelves, puppet clothes hang from our washing line, and even Tilly is getting used to Mr. Punch and his colorful companions.... 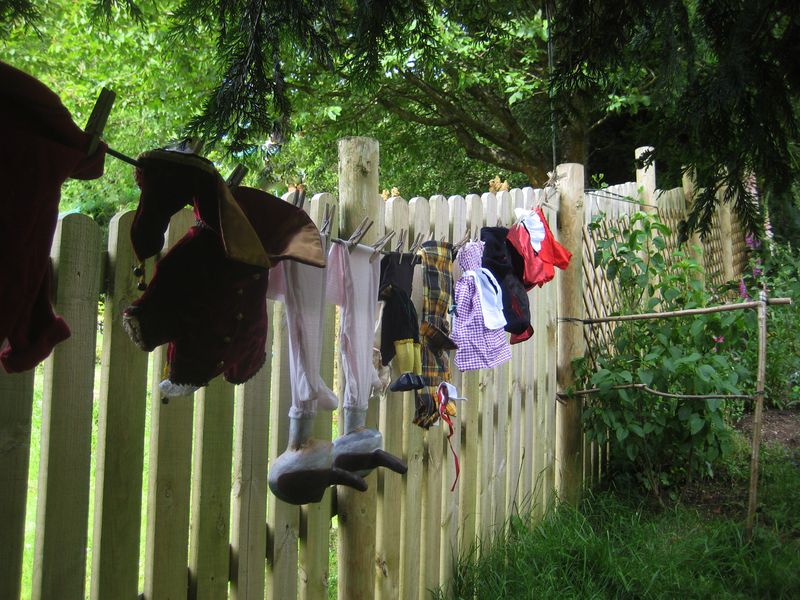 I confess I was never a big fan of Punch & Judy or of slap-stick comedy in general before I met my husband -- whose life has been devoted to the European form of masked theatre known as Commedia dell'Arte, which is very slapstick, and very funny, and which won me over its mix of ridiculous pratfalls and sly, wry intelligence. Howard helped me to see the mythic roots of such comedy in Trickster tales and Dionysian revels, in the sacred anarchy of traditional carnaval and rural folk pageantry, and now I'm fascinated by lines of connection between the various forms of mask/puppet theatre and folk use of these arts in ritual form.

The ritualized slapstick violence of Punch & Judy is problematic today, however, for we tend to "read" the story in a literal fashion, interpreting the action as domestic abuse, when it is best understood metaphorically, as the unleashing of pure anarchy. Mr. Punch is a Trickster figure: a manifestation of Trickster's wicked delight in violating all social norms and constraints -- brazenly knocking down every authority figure (which is precisely why children love him). The challenge for performers today is to craft a story that conveys this same archetypal spirit of contrariness, freedom, and anarchy, without tacitly condoning violence, domestic or otherwise, in the real world. 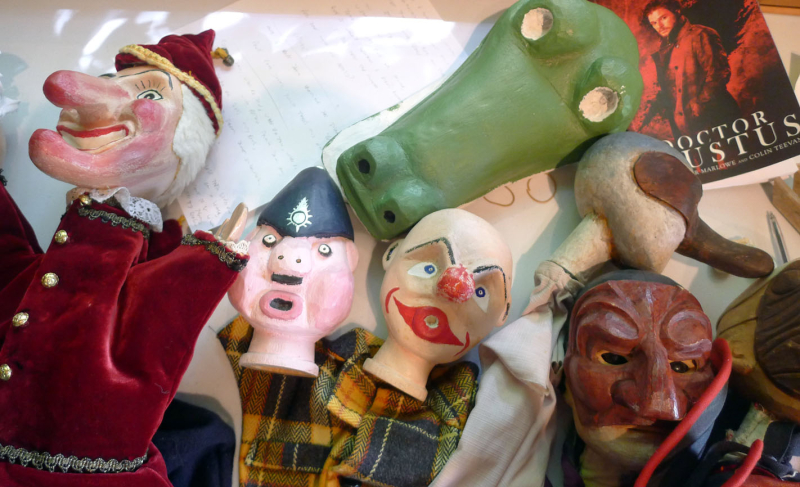 If you'd like to know more about the history of Punch & Judy, I recommend "That's the Way to Do It!" on the Victoria & Albert Museum website, curated to honor the show's 350th anniversary in 2012 -- a date based on the first known puppet play in England to contain a version of Mr. Punch, recorded by Samuel Pepys in 1662. He noted seeing it in Covent Garden, writes the V&A's curator, "performed by the Italian puppet showman Pietro Gimonde from Bologna, otherwise known as Signor Bologna: 'Thence to see an Italian puppet play that is within the rayles there, which is very pretty, the best that ever I saw, and a great resort of gallants.' 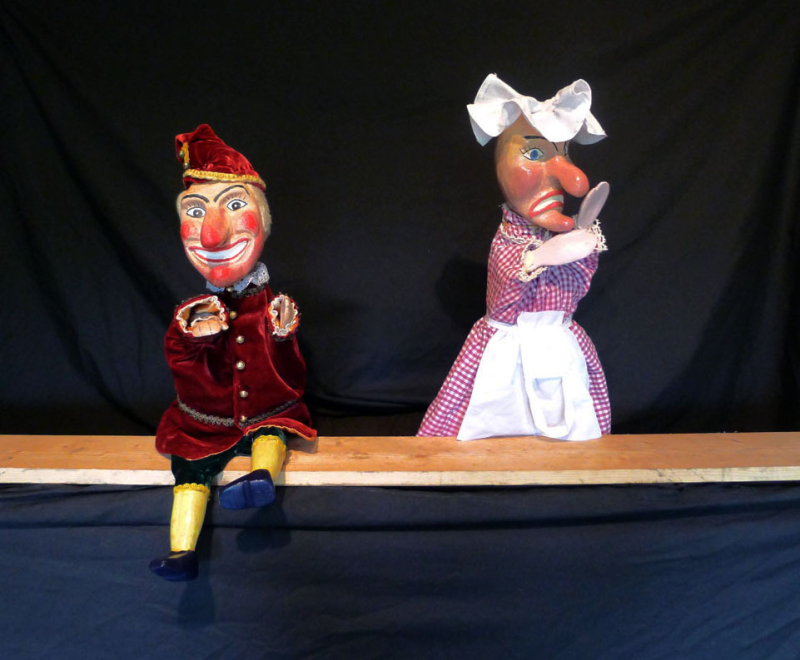 "Mr. Punch made himself thoroughly at home in Britain during the 18th century," writes the  His wife was the shrewish Dame Joan who made his life a misery, and his hunched back and pot belly became more pronounced. The marionette Punch was the celebrity disrupting the action in puppet plays all around the country, in established puppet theatres and in fairground booths where puppets were a popular feature of all the great fairs and small country wakes throughout the century." 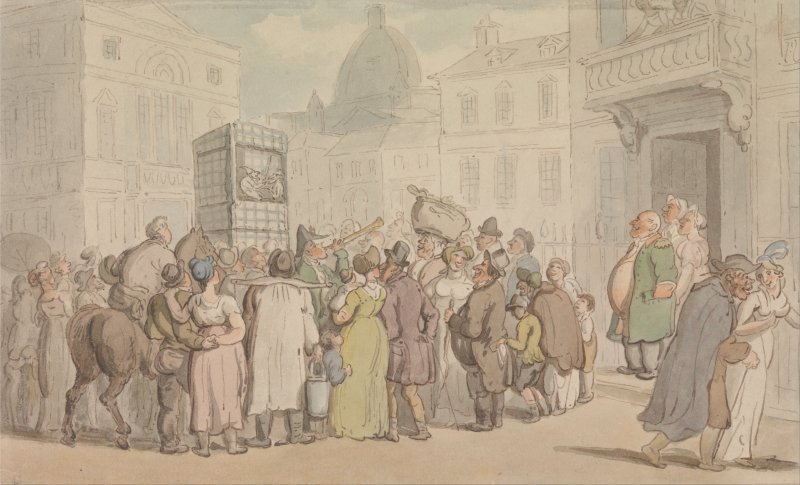 "By 1825 we hear in Bernard Blackmantle’s The English Spy of his wife being called Judy instead of Joan: ‘old Punch with his Judy in amorous play,’ and of Punch’s having a Toby the dog, usually played by a real dog."

Keep an eye on Howard's theatre Facebook page if you'd like to see how his Punch & Judy project develops. 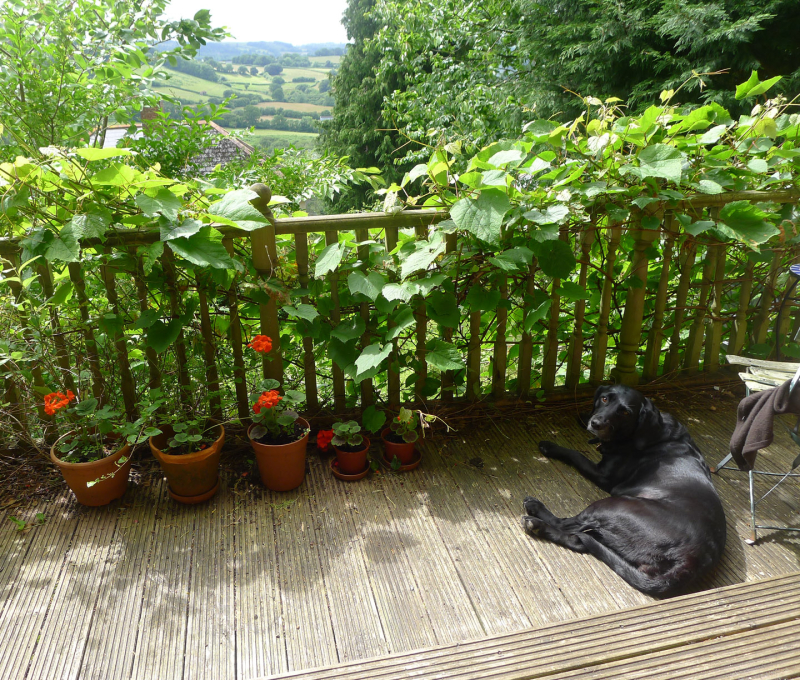 The art and photographs above are identified in the picture captions. (Run your cursor over the images to see them.)

Dear Terri,
What an interesting post. Devon- almost heaven we used to say.( I live in Chapel Hill, NC but am an angolphile of first order).

Have you read the wonderful fantasy mystery books of Ben Aaronovitch? Detective Peter Grant has fairy powers he is discovering in London. The series is called the Rivers of London for the women/fairies who are the underground rivers leading to the Thames. One story centers on a Punch and Judy show..I am sure you have read them... they are wonderful.

I will always count The Wood Wife as on of the books that started me in my esoteric journey. thank you
Mary Lou Bethune

Of late I've been banging up against a wall of completely literally minded folk so often that I'm starting to become alarmed. Just last week I posted an image from my upcoming art book that features an image of mine with a favorite quote from G.K. Chesterton. The one about fairy tales, children and dragons. I had more than one person post angrily on my board that 'I was teaching children to want to kill dragons instead of riding them!" Lordy, had they never encountered a metaphor before? Sigh...

I had to stop, and reread your first line. And then remembered where I was. Windlingland. Home to myth and metaphor. That Vial of Literal prescribed and taken regularly removes the demons and the angels. In the passing of one's daily schedule, no myth or metaphor would survive.

And to Terri and Howard: how beautifully you two occupy your places with a loyal Hound to keep an eye:)

I absolutely loved the film of the the Punch and Judy show from 1901! Monochrome shadows of ghosts long gone. The older gentleman with the sideburns; the boys more interested in the camera than the show; the incidental passers-by. One infinitesimally small part of their lives recorded, captured and held for the eyes of the future. (I can't help wondering if the boys survived the looming conflagration of the First World War, just thirteen years away from the time of filming.)

As for Punch and Judy itself...even as a kid I found it weird and creepy; but as it is a deeply historical weird and creepy I'm all for it. May it survive for many centuries to come, sending generations of children (just like me)to dream nightmares in the dark of their bedrooms.

Such an interesting post. I will always remember my first Punch and Judy show - yes it was farcical, but there was also a weirdness to it, a surreality, that suggested something deeper and wilder. Now I understand better. Sadly, I'm not sure if they can still be found in this country, I haven't seen one in decades, which is a great shame.

WOWIE wow terri, theis is spectacular! I just hopped over to Howards page and Liked him at Face book so I can look forward to more developments.

Thanks for all this. I just inherited Punch & Judy puppets which my parents had from their travels to England. My Dad had been stationed there during WWII & loved many things English! Although I love the strange beauty of the puppets, I guess I took their stories too literally & now I have a better understanding. Will follow the links you offer. Glad now to be more comfortable with this gift from my parents. You gave me a gift!

Fascinating article! Punch and Judy have always unsettled me a little, but the photo of their decapitated heads didn't help! It's always good to know the origins of things.

I haven't read Ben Aaronovitch, so I'll will put him on my reading list. Thanks for the recommendation. Definitely sounds like my cup of tea.

Bless you for your kind words about The Wood Wife.

Charles: Reading myth and sacred stories literally rather than metaphorically causes so *many* problems in the modern world. I remember reading Joseph Campbell on this very subject many years ago, and it's one of the things I entirely agree with him about.

Isn't that film incredible? And the dog!!! My heart melted...

I find Punch & Judy creepy too, and it wasn't until I learned more about it from Howard that I understood that was part of the point of it. Trickster always has that dark, dangerous edge to him (or her).

They are on the decline, even here in Britain -- largely because of the violence issue. But puppeteers are pushing back against that perception, and finding new ways to present Mr. Punch. It's fascinating to watch this old folk art evolve....

So glad you liked it! I hope other people are inspired to follow Howard on Facebook too. He and his theatre colleagues are doing all kinds of good work...

Yes, they've unsettled me too...and continue to do so, though I'm much more fascinated by them now that I understand their history better. And being married to a dramatist/puppeteer, I'm getting used to encountering stranger things in the back garden than puppet heads!

Catching up on my reading and I enjoyed this post thoroughly. Being American, I've always known the names Punch and Judy, but except for Paddington Bear's brief misadventure with them, I've never known much else. It's wonderful to learn about this rich history. And that film from 1901 was fascinating. I confess, I couldn't keep my eyes off the fathers watching with their small children. I imagine my 4YO would be utterly delighted by such a show today. Thanks so much!