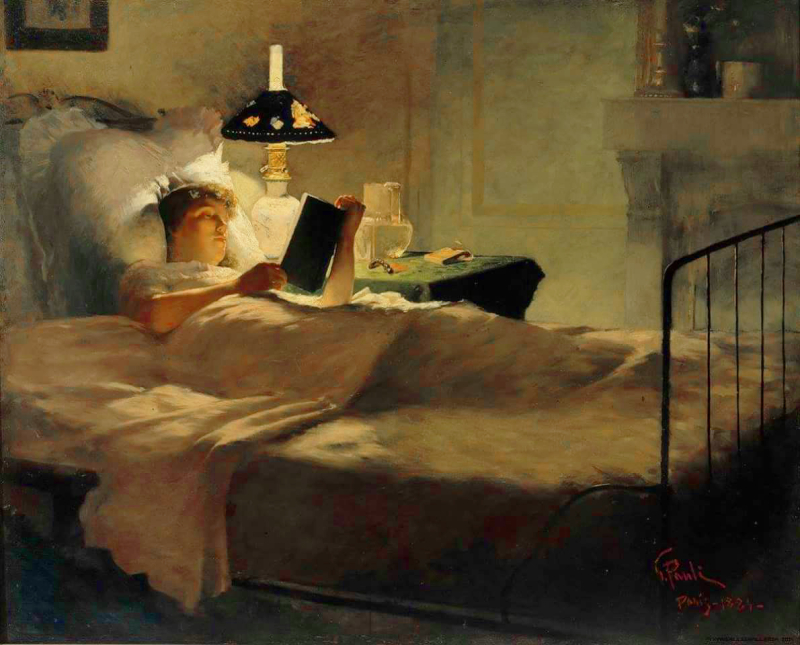 I'm afraid I'm out of the studio for another day or two. It's frustrating to find myself back in bed again, but it's only a stomach flu this time and will surely be over soon. Meanwhile, there are plenty of books to read, and the Faithful Hound cuddled beside me. 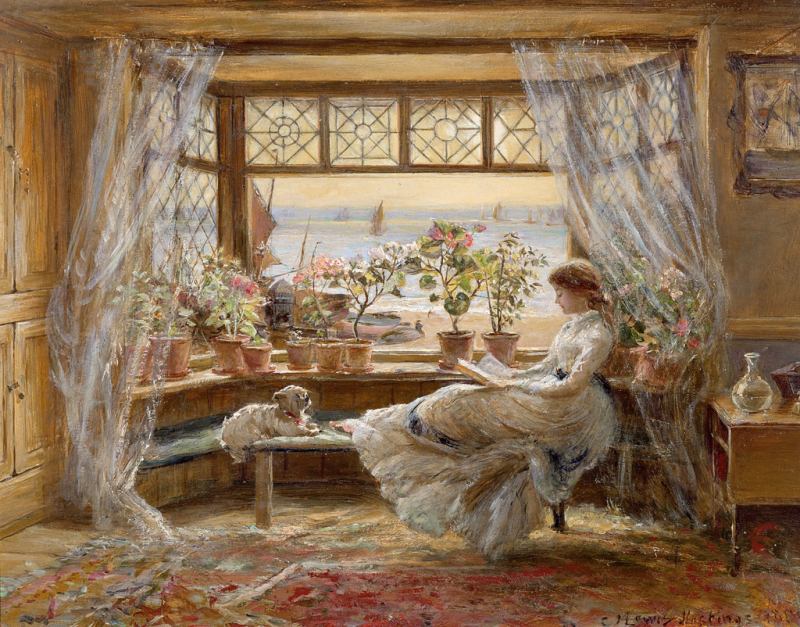 "Reading is a co-production between writer and reader," says Ben Okri. "The simplicity of this tool is astounding. So little, yet out of it whole worlds, eras, characters, continents, people never encountered before, people you wouldn’t care to sit next to in a train, people that don’t exist, places you’ve never visited, enigmatic fates, all come to life in the mind, painted into existence by the reader’s creative powers. In this way the creativity of the writer calls up the creativity of the reader. Reading is never passive." 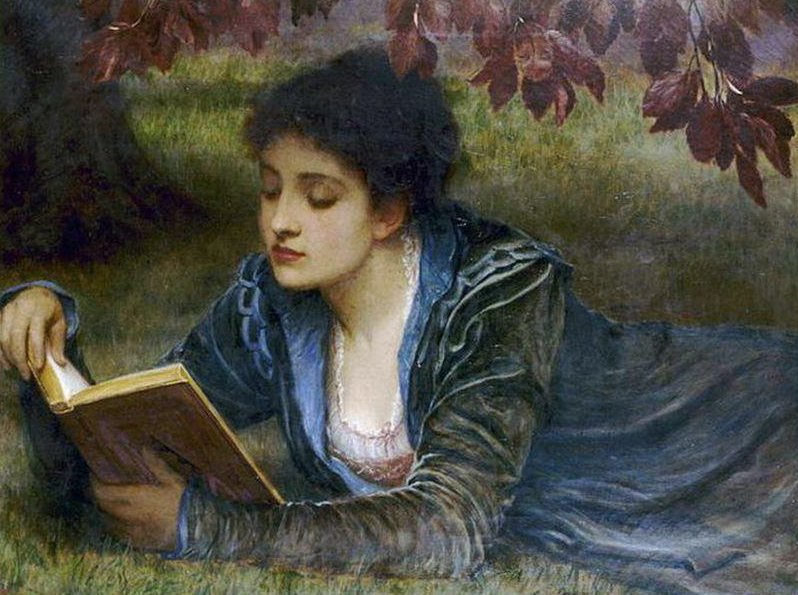 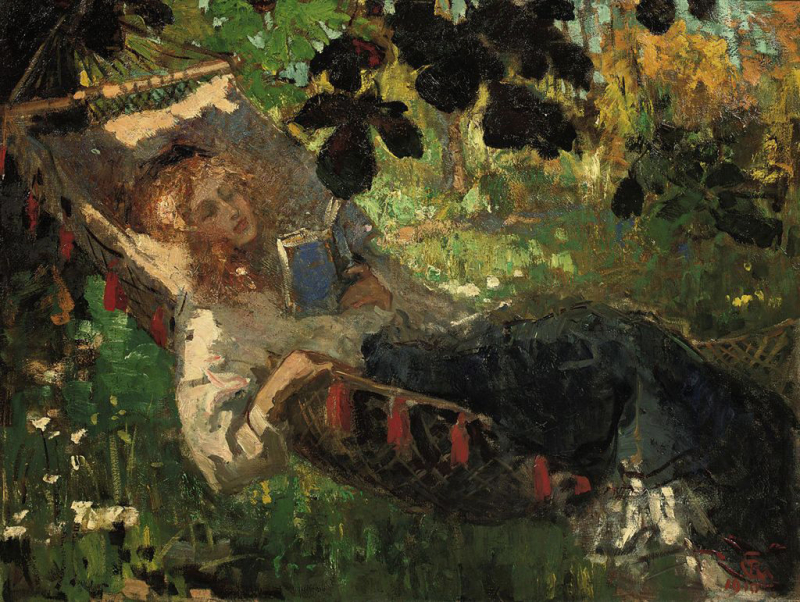 ''Beware of the stories you read or tell," he warns; "subtly, at night, beneath the waters of consciousness, they are altering your world.'' 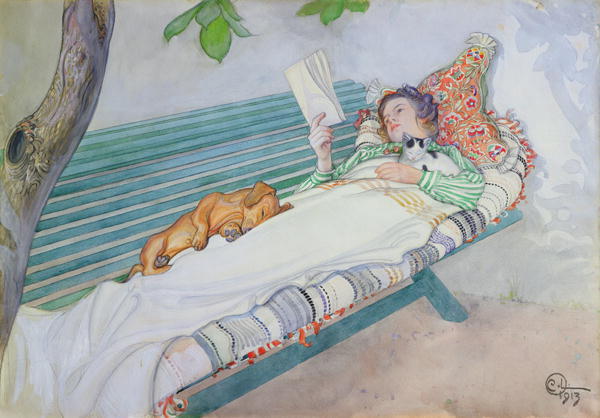 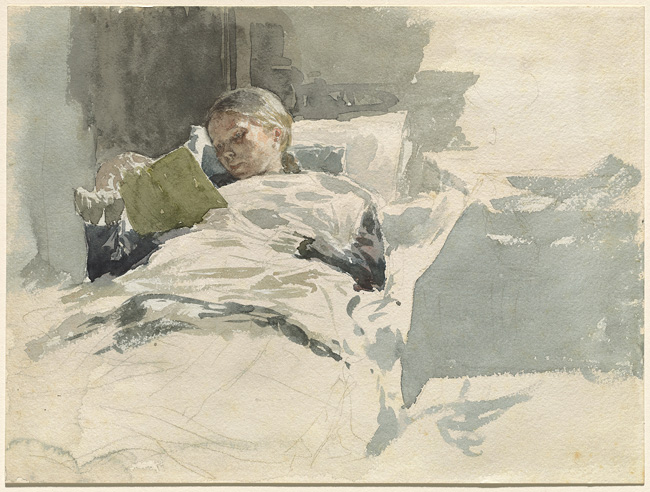 The pictures today: reading and resting. Artists are identified in the picture captions. 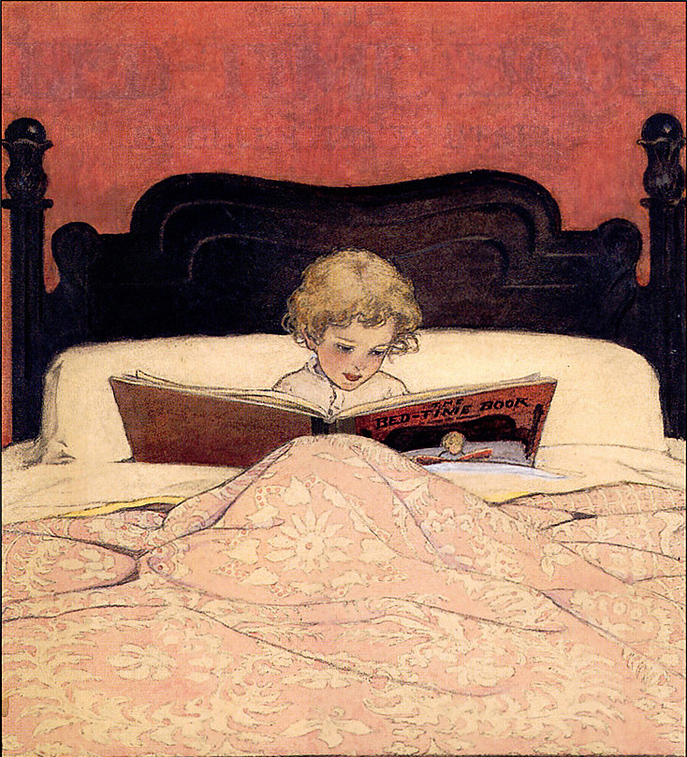 The quotes by Ben Okri are from his essay collection A Way of Being Free (Phoenix, 1998); all rights reserved by the author. 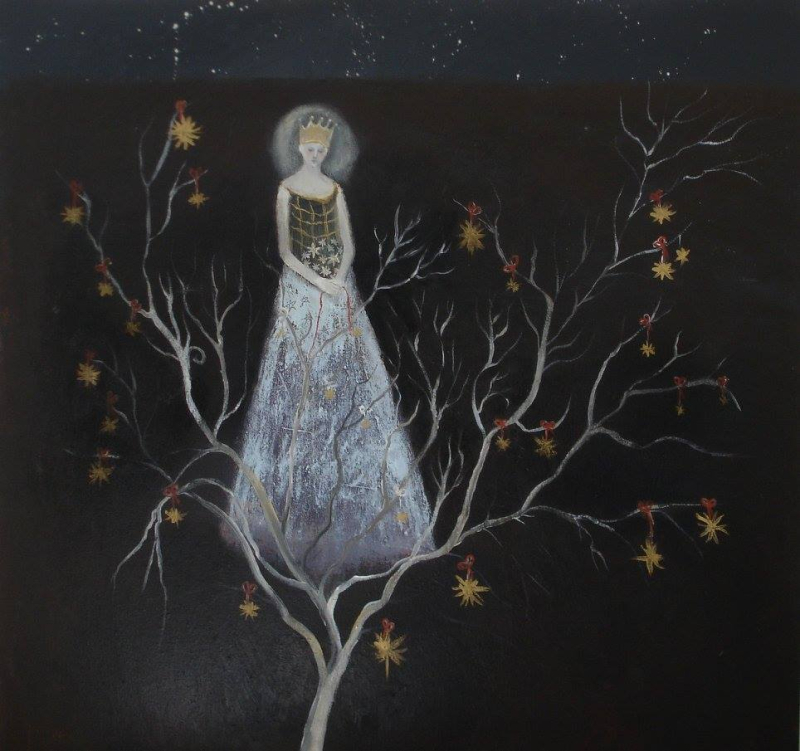 Howard and I truly enjoyed last week's Chagford Show, and also the final Widdershins event at Green Hill Arts on Saturday night. But with all this gadding about, I've managed to pick up some kind of stomach bug. I'm hoping it passes quickly and I won't be out of the studio for long. 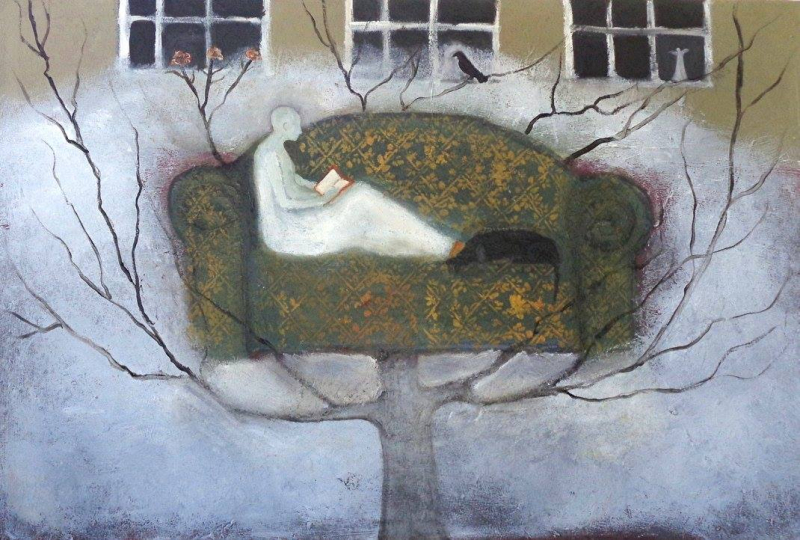 A few reading recommendations for you in the meantime:

W. W. Tarn, The Treasure of the Isle of Mist by Rob Maslen (The City of Lost Books)

Kazuo Ishiguro, The Buried Giant by Rob Maslen (The City of Lost Books)

Simplicity or Style: what makes a sentence a masterpiece? by Jenny Davidson (Aeon)

Encyclopedia Blue, a history of the color by Bernd Brunner (The Smart Set)

Watch Out, Little Red, on wolves in Germany by Bernd Brunner (The Smart Set)

A World Away, So Near by Julian Hoffman (People Need Nature) 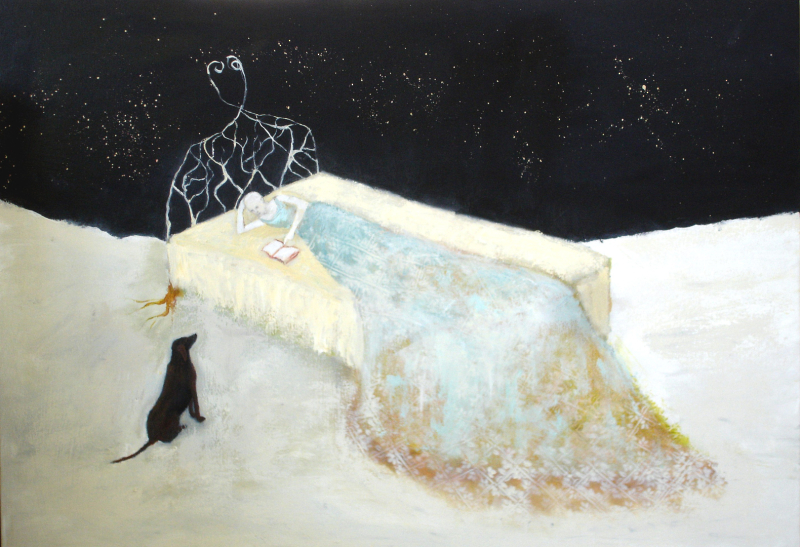 The paintings today are by Jeanie Tomanek, whose work graced the poster for the "Power of Story" talk. Go here to see more of her luminous art. 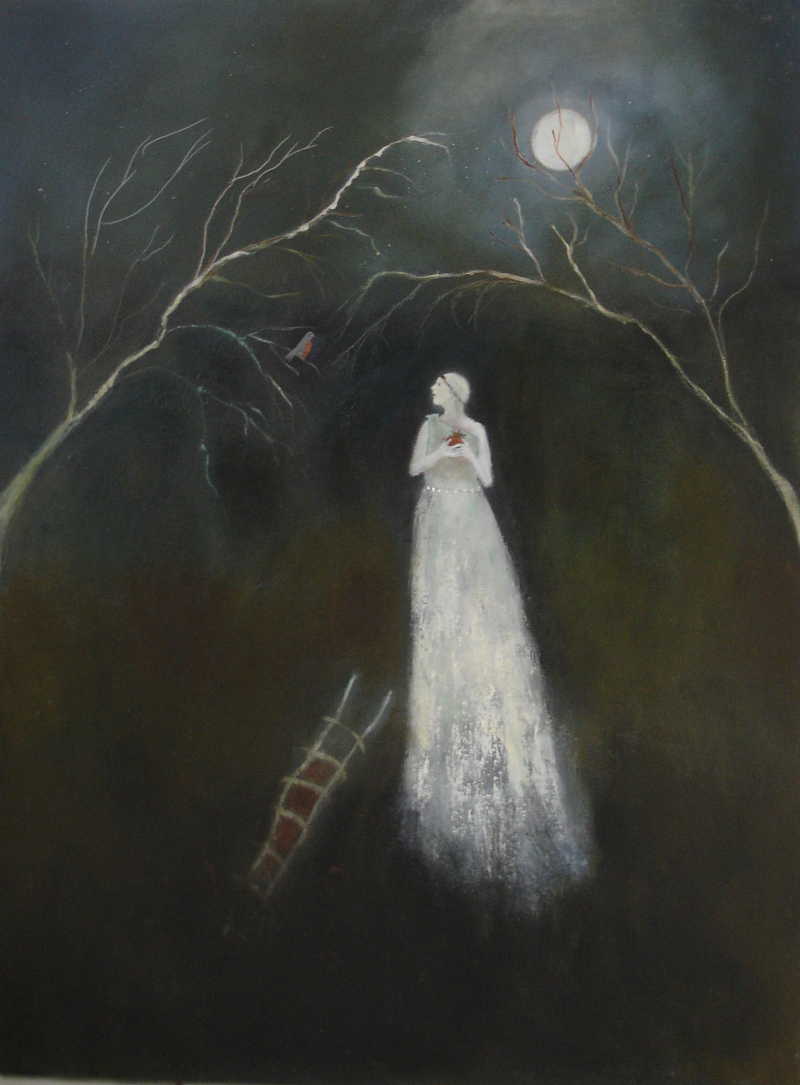 The poem in the picture captions is from Evening Train by Denise Levertov (New Directions, 1992); all rights reserved by the author's estate.

This week's music is from Rhiannon Giddens,  a wonderful singer, bluegrass banjo picker and fiddle player from Greensboro, North Carolina. Giddens began her career playing with a postmodern string band (Sankofa Strings) and a Celtic band (Gaelwynd), but she's best known as a founding member of the country, blues, & bluegrass band Carolina Chocolate Drops.  She's released seven albums with the latter group, and one solo album (Tomorrow is My Turn), all highly recommended.

Above: "Julie," a song by Giddens, with lyrics based on a slave memoir. The video was filmed in North Carolina last year.

Below: Giddens and her band perform "Last Kind Words" on the American program A Prairie Home Companion (2015).

Above, Gidden sings "Black is the Color (Of My True Love's Hair)" for WFUV Radio in New York (2015). This old Scots/Irish folk song is also a staple of Appalachian folk music in America.

Below, Giddens performs "Mouth Music," in Gaelic, at Celtic Connections in Glasgow, Scotland (2016).

The final video is an old one: "Sowden's Jig," performed by Danny Barberin, Giddens, and two fellow-members of Carolina Chocolate Drops in an alley in Fresno, California (2010).

For more Carolina Chocolate Drops, go here for their video of "Country Girl" (a charming send-up of stereotypical country music videos, complete with babes in pickup trucks), and here for a fine selection of bluegrass tunes recorded for Liveset. 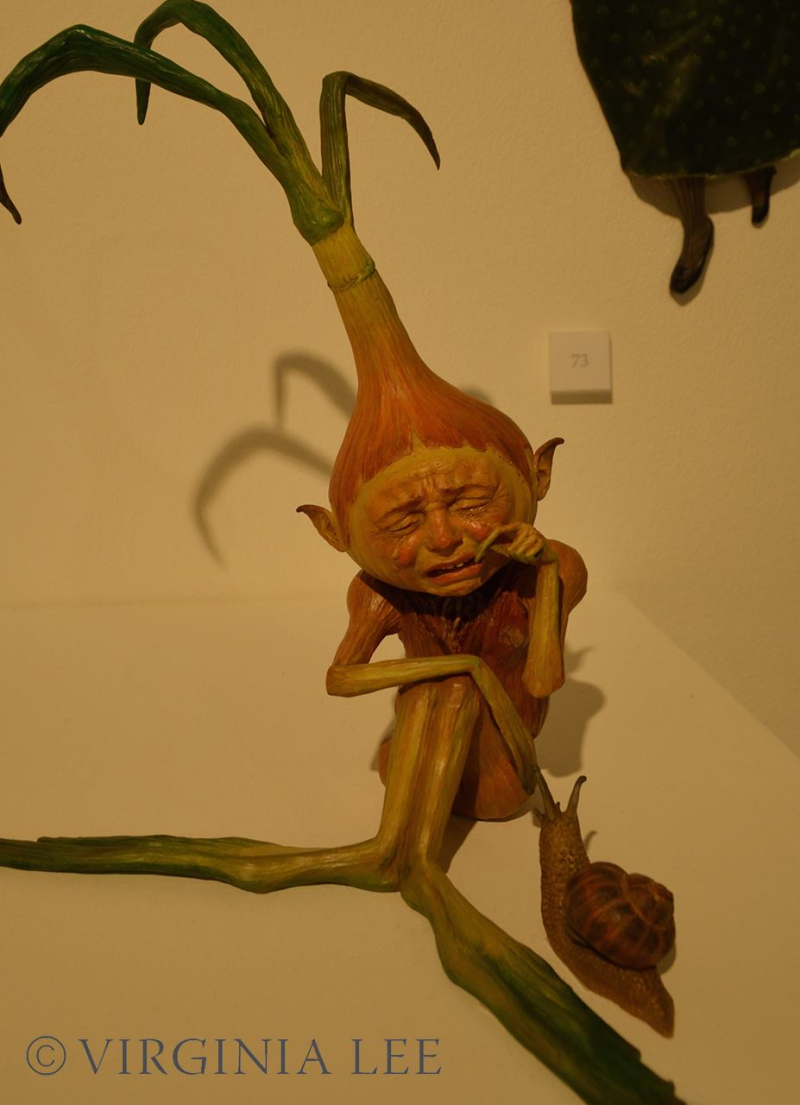 This charming sculpture is by Virginia Lee, who says: "My onion can barely contain his tears knowing there is only week left of being in Widdershins, at Green Hill Arts, in Moretonhampstead." The show closes on Saturday, August 27th.

If you can't make it over, David Wyatt provides a glimpse of the exhibition here.

Many, many thanks to everyone who came to share the "Power of Story" evening with me & Howard at Green Hill last night. 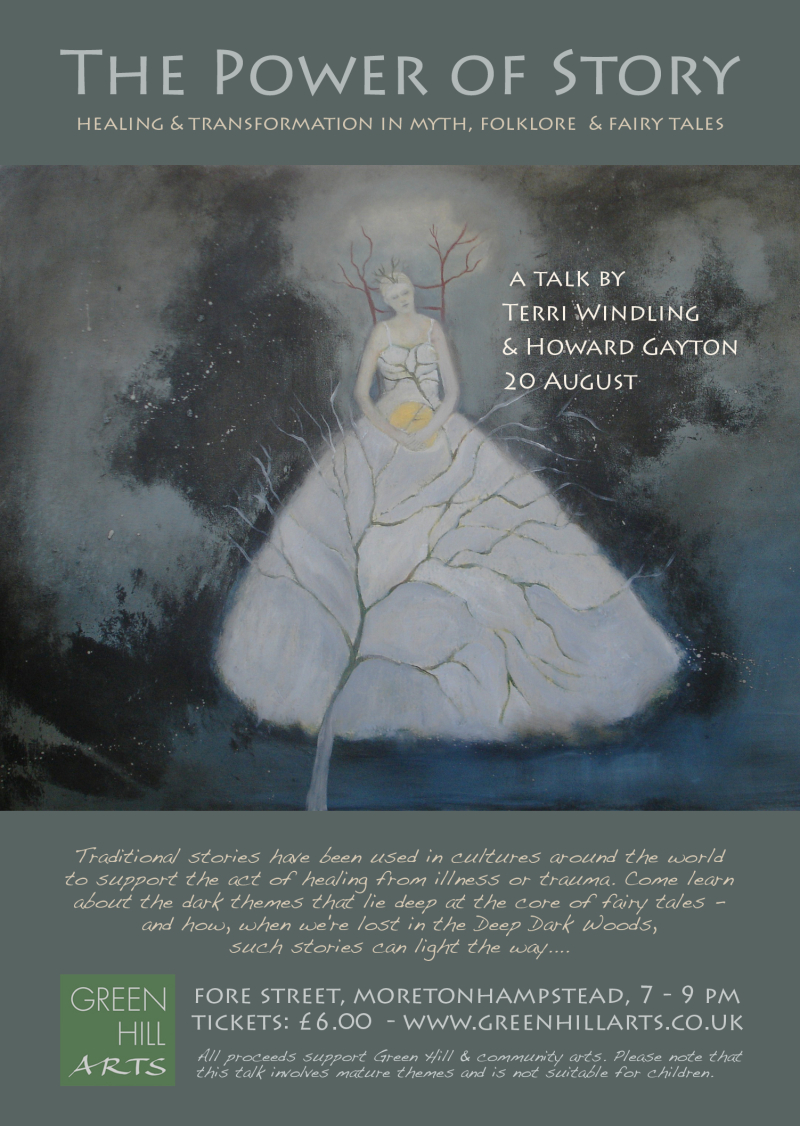 I'm giving this talk on Saturday evening, woven with storytelling by my husband Howard Gayton, an actor and dramatist. Perhaps we'll see some of you there? More information on the event can be found on the Green Hill website. Also, there's just one more week to see the Widdershins exhibition. Then, like faery gold, it's gone.... 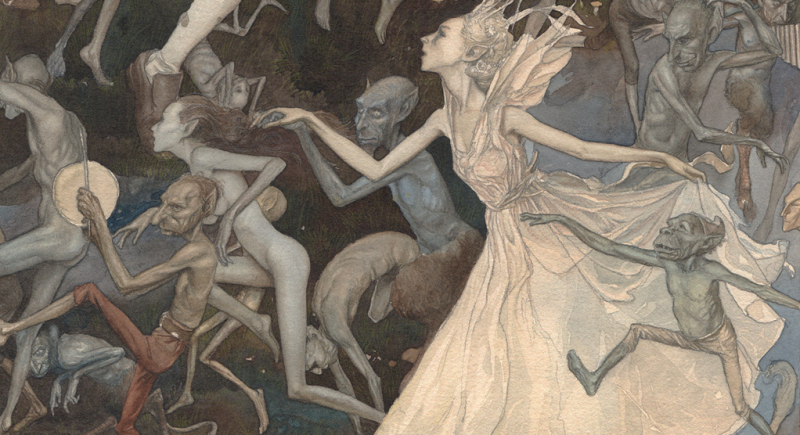