Letting the light back in
The narrative of marriage

The fairies are back.... 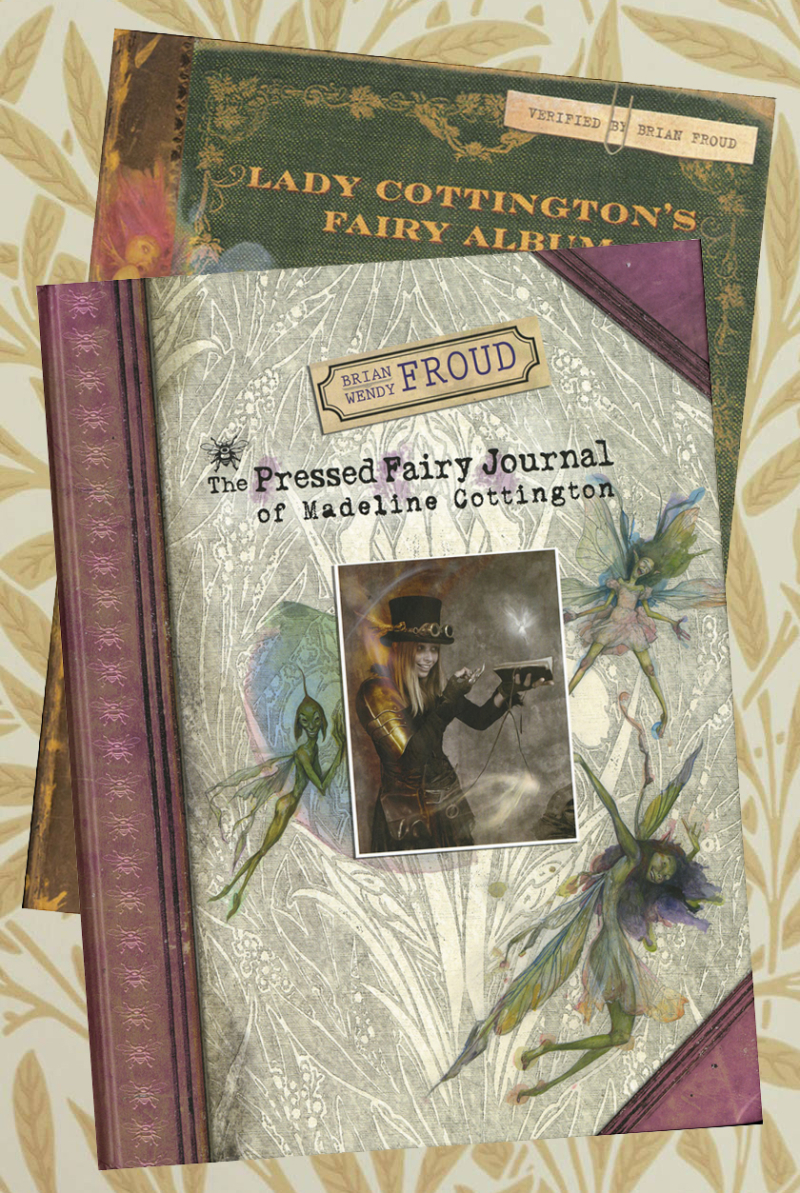 Sometime in early 1990s, my friend and village neighbor Brian Froud unearthed the Victorian diary of Lady Angelica Cottington and made a startling discovery. Whereas other gentlewoman of her time pressed flowers between their diary pages, the young Lady Angelica pressed fairies. Or rather, she caught and pressed the psychic impressions of fairies, who delighted in leaping into her book, imprinting images of themselves (often rude in nature), and then leaping out again unharmed. 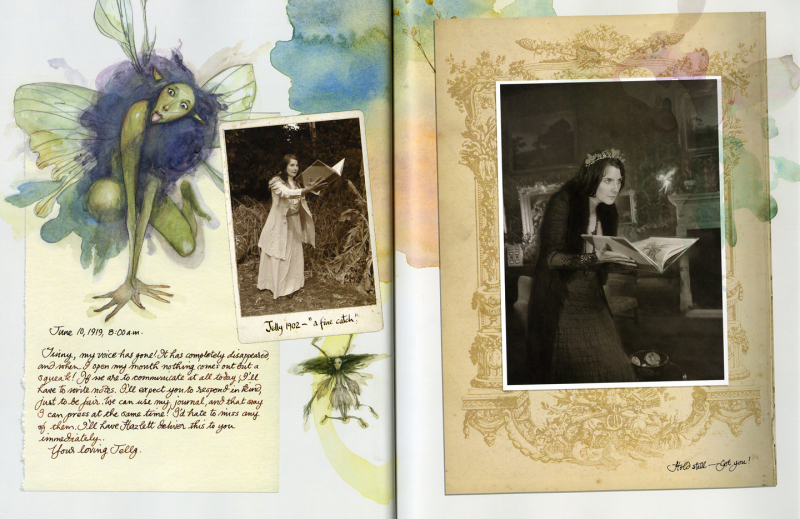 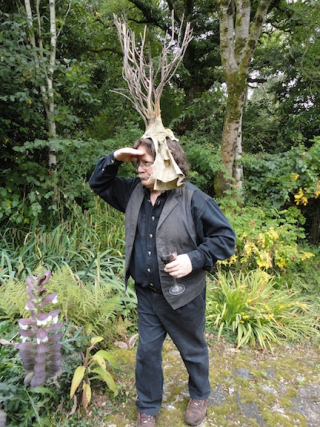 "It has often been my onerous task," writes Brian, "as the recipient of so much Cottingtonalia, to examine, scrutinize, and verify the often distasteful squashings and odiferous smears [of the pressed fairies], but I continue to do it with a noble sense of scientific inquiry, for I have long abandoned all hope of financial reward or knighthood (or an open sardine tin). All I can realistically hope for is a third-rate rest home near the gasworks in the less salubrious sector of Budleigh Salterton.

"The series of Cottington books may have provoked outrage or indifference from the discerning reader, however, some scholars of the esoteric -- notably a group in Oxford known as the 'Stinklings' -- gather weekly in the Dingly Arms, a rather down-at-the-heels public house. Here, over hot, buttered crumpets and pints of Bishop's Finger, they conduct fierce, philosophical debates about the various fairy phenomena appearing in my books."

Now we have a have a brand new piece of the puzzle: The Pressed Cottington Journal of Madeline Cottington, a volume that documents the strange history of Cottington Hall, the family's fairy-infested manor in Devon. Brian calls it the most astonishing book of them all, and I'm inclined to agree. 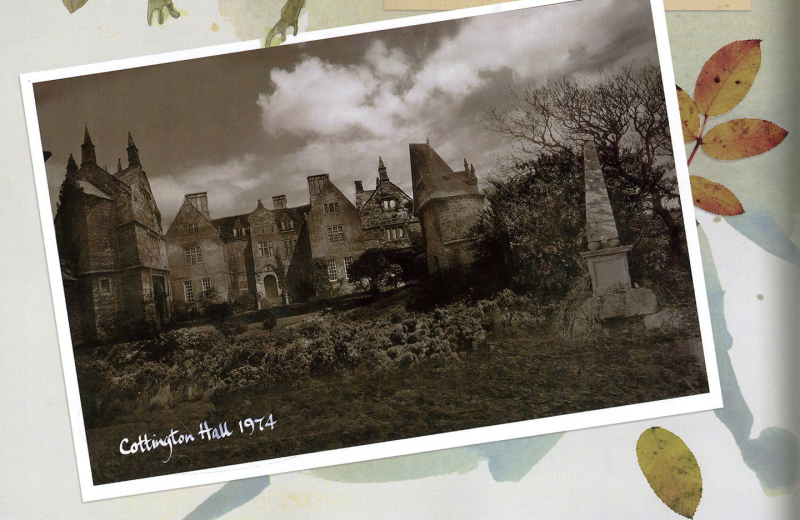 The story is told by Madeline Cottington, the most recent descendant of this odd British family. Traveling to the ruins of the Cottington estate, she finds an odd jumble of junk and treasures: letters, drawings, diagrams, photographs, books, clothes, peculiar contraptions. Compelled to uncover her family history, and unaware of the dangers the Hall still holds, Maddi finds that she too is part of the story. And that the fairies are very real... 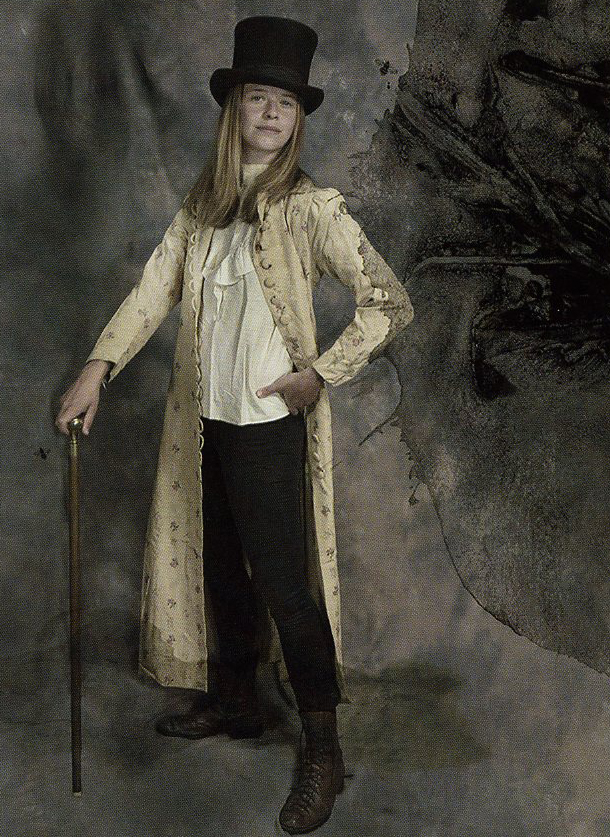 Above, Madeline Cottington, fairy hunter in the making.

Below, Angelica and Quentin Cottington, photographed early in the 2oth century. (Poor Quentin was driven mad by the war...or perhaps by other mysterious things?)

If these three happen to resemble Lillian Todd-Jones, Virginia Lee, and my husband, Howard, well, surely that's just a trick of the fairies. 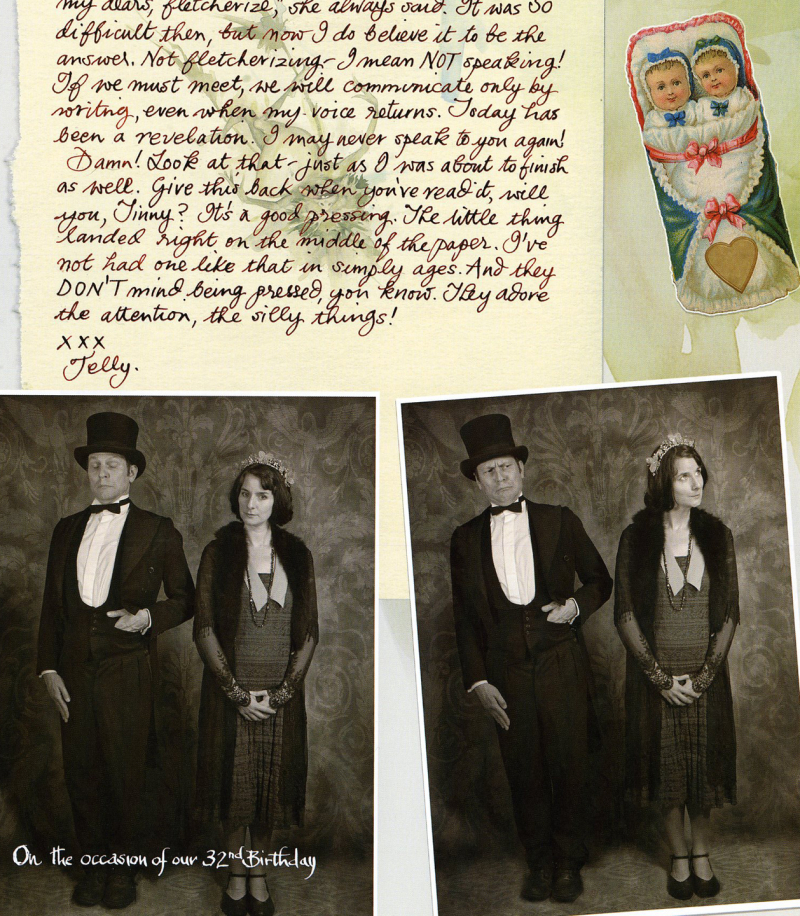 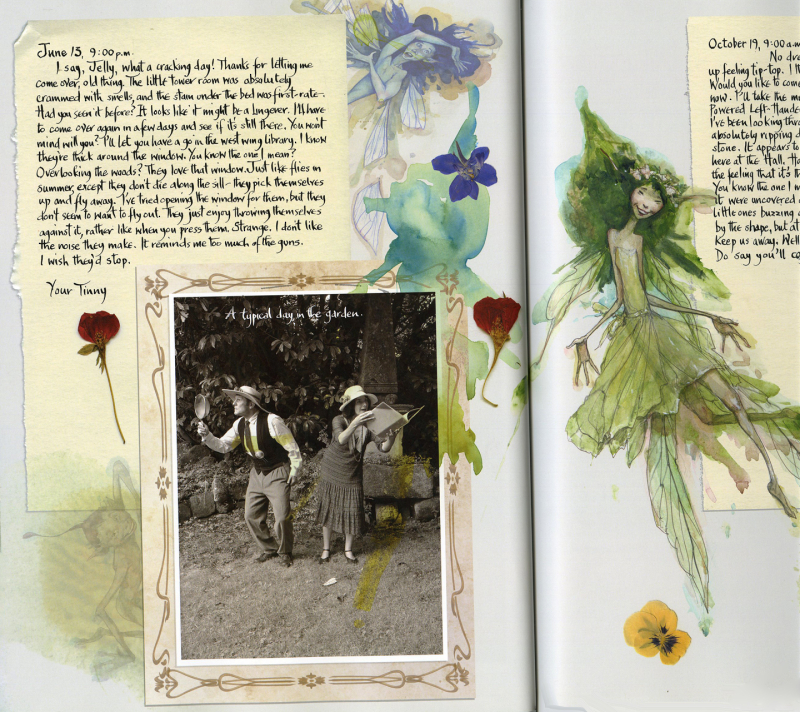 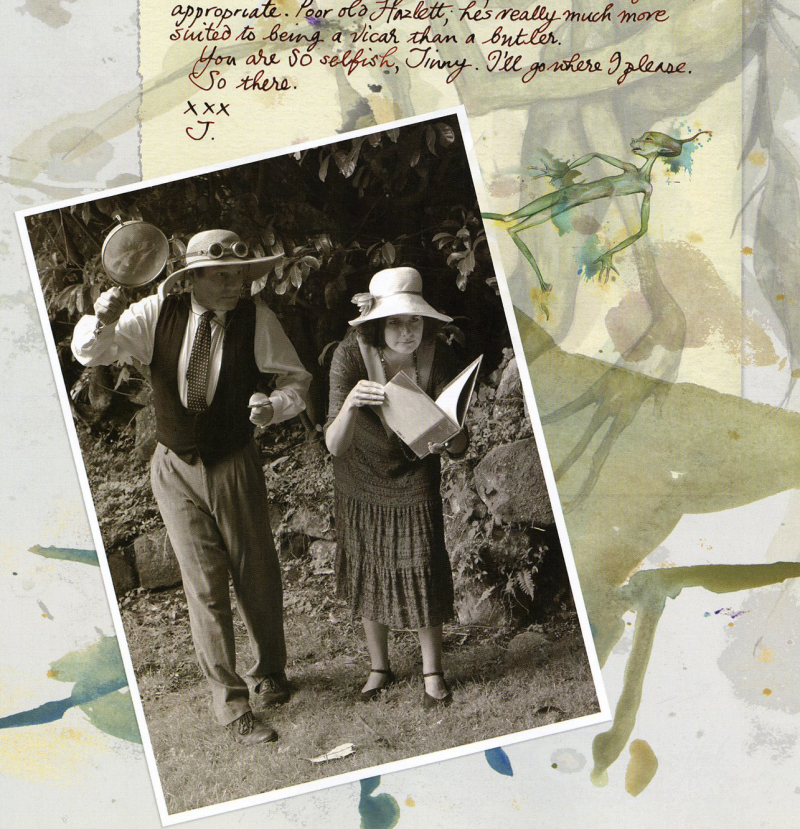 The Pressed Fairy Journal of Madeline Cottington by Brian & Wendy Froud contains a wonderful story, magical art, and is a pure delight from start to finish. It just came out from Abrams Publishers (New York). Please don't miss it. 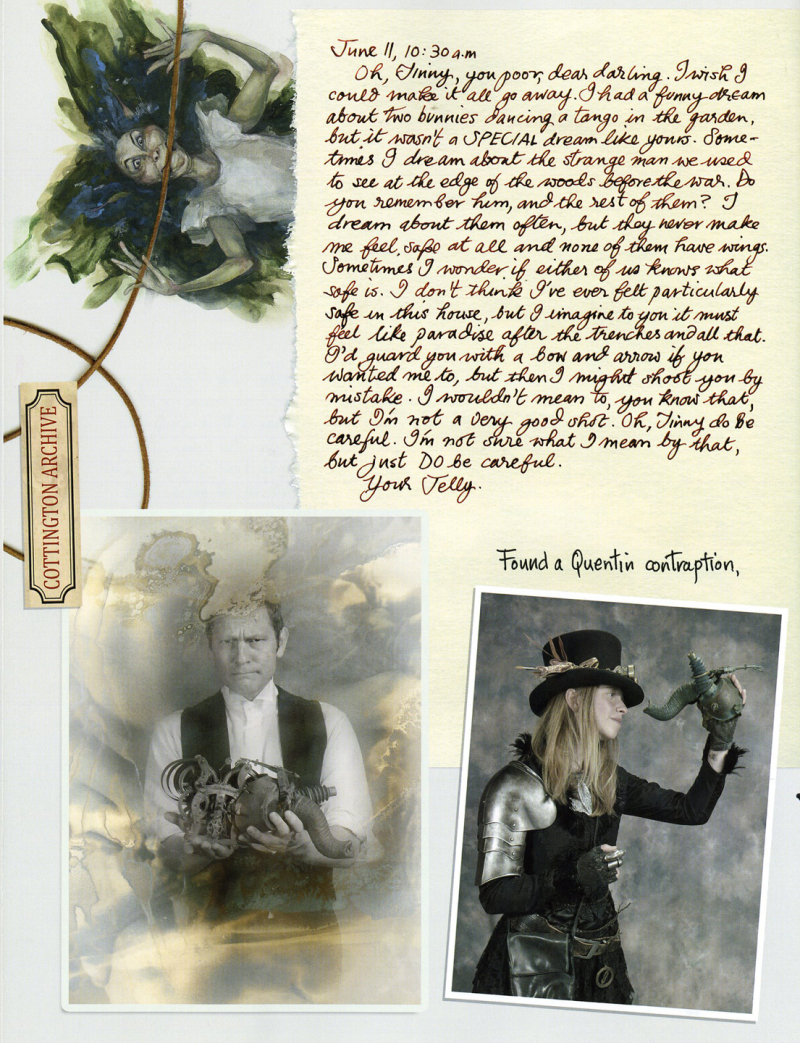 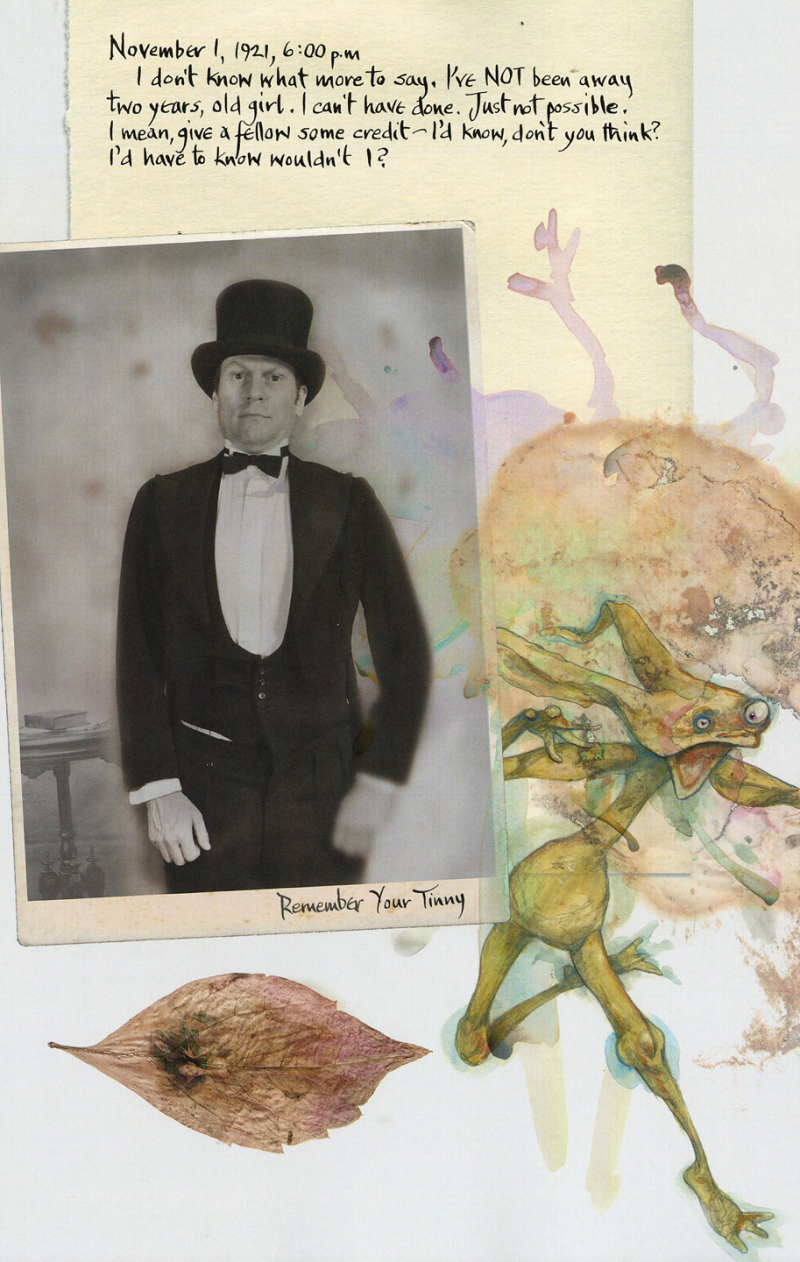 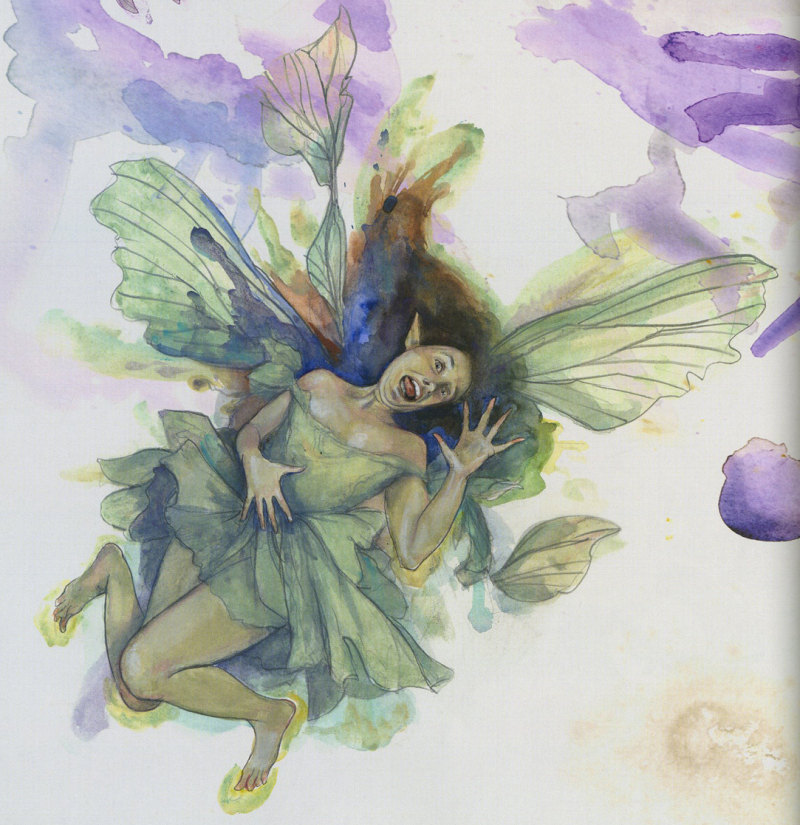 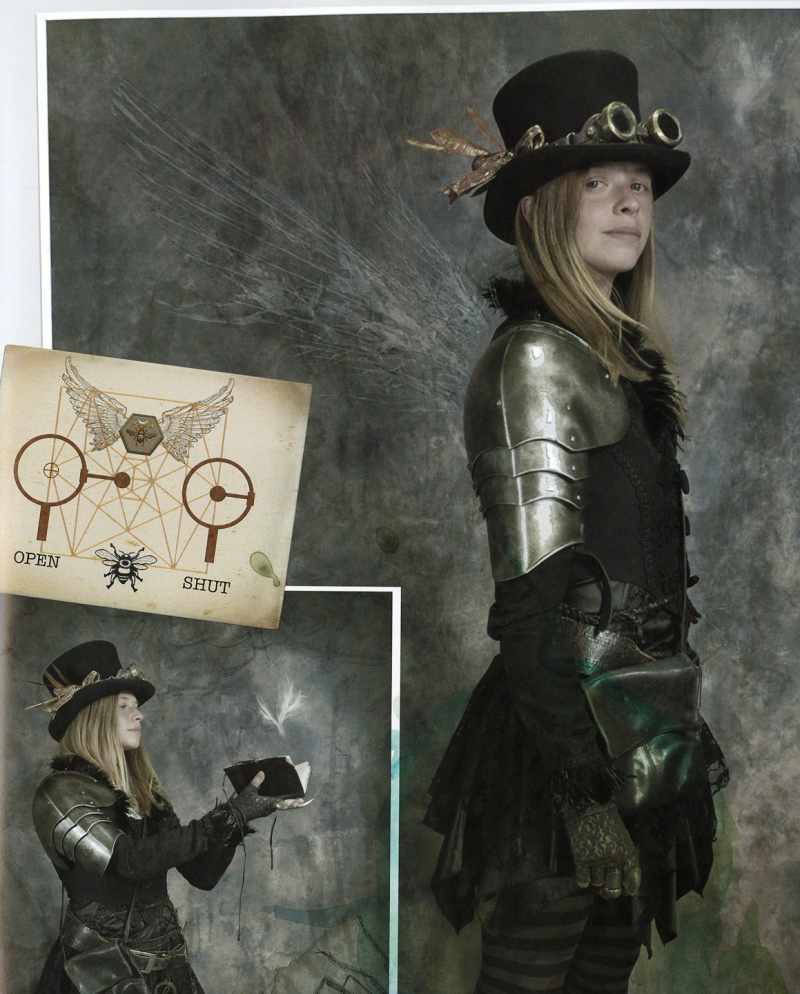 I am so glad to see that the great British (and American) eccentric is still thriving in Devon! Howard suits a top hat; perhaps he should wear one regularly, he'd look quite dapper in the local shops.

Talking of things eccentric, otherworldly and supernatural, I've long wanted to ask if Tilly is related to the Hound of the Baskervilles? That noble hound haunted Devon and I just wondered if she had canine aristocratic blood...perhaps on the distaff side?

Hope Tilly's doing well and on the mend now. Also a happy Equinox to one and all; may all your harvests be happy and enjoyable!!!

Yes, yes to the gladness felt over Devon's latest eccentricity, Stuart!! To wake and see the jolly enterprise makes waking from the dreamworld.

Hmmm...on the relationship of Tilly to That Hound, couldn't say.
But, yes, yes right away do hope YOUR is on the mend.

And an 'amama (amen) to you and all a Happy Equinox, or as Hawaiians celebrate Happy Ka Piko o Wakea. May all imbalances equal out!!

And Happy Ka Piko o Wakea to you and everyone else too, Mokihana!

Over here, across the pond, for a while It came after midnight. In the darkness of Isadora Duncan Alley...the sound, the barking, sharp and wild. rather soprano, frightening and weird. I believe it was the Pomeranian of Baskervilles, sent to us for a while. And then, it went away to where I cannot imagine.

Seriously, what would we do without fairies? Such loss would be a disaster. We should thank them for their charm and suspicion that some do not believe in them, who are grim and live in dark places I would not wish to go to. Give me gardens and magic places, to stumble onto and never forget, thought they
do find other lodging. Such good folk as Connington's are as rare as fairies and I bow to their work, and it is good no fairy has been flattened. It is like a book of fairy souls as far as I can see.

Oh want, want, want these books. Lovely - that's what they are - just lovely. Ditto the others, the Devonian eccentric is alive and thriving.

I just ordered mine. I am so excited! Terri. Perfect 1st day of Autumn.

Hi Phyllis, the other night we had what I prefer to believe was a vixen in our garden. It yelped, screamed and screeched in such a weird way that our cat (who has an easy working relationship with the local foxes as they all murder everything they can set tooth to) burst into the kitchen hugging the ground in panic and growling to himself.

Who knows what it was...perhaps just a vixen or perhaps it was the lost soul of the last wolf of Leicestershire that was hunted to extinction at some point in the early medieval past.