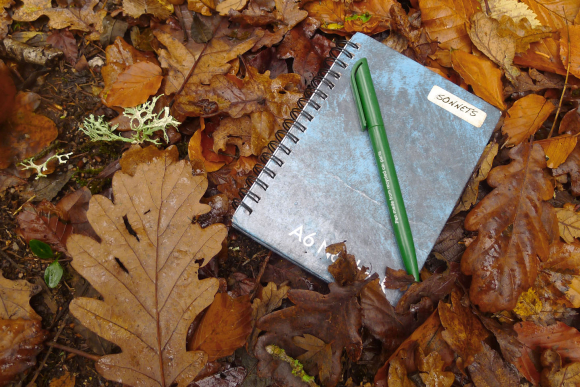 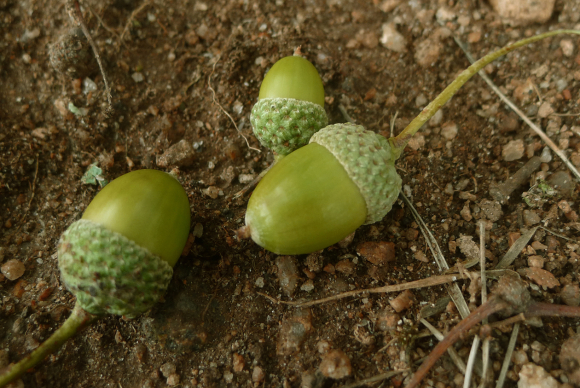 In celebration of Peter Oswald's new book Sonnets of various sizes (Shearsman, 2016), my husband Howard has filmed him delivering each poem at Aller Park, on the Dartington estate, where Peter is Artist-in-Residence. These little films are scheduled to appear once a week on the "Sonnet Feed" of Peter's website, released every Friday afternoon.

The first two sonnets are online now...and they are simply gorgeous.

As devoted as I am to the printed word, I love listening to these pieces, sinking back into that old, old oral tradition...

Peter Oswald (for those who don't know his work already) is an award-winning playwright & poet, performer & storyteller...and co-founder, with Howard, of the new Foxhole Theatre company, dedicated to exploring verse and mask drama in all its varied forms.

Peter's plays have been produced at the Globe and the National, as well as in the West End, on Broadway, and around the world. He was Writer-in-Residence at the Shakespeare's Globe from 1998 to 2005 (under the mentorship of Mark Rylance, for whom he wrote two leading roles); and at Dartington from 1997 to 1998 -- resuming the latter position in conjunction with his wife, poet Alice Oswald, in 2016-2017. Last month, Peter and Alice took part in Stories in Transit, a project organized by Marina Warner in Palermo, Italy, exploring storytelling in relation to refugees, migrants, and other displaced peoples. 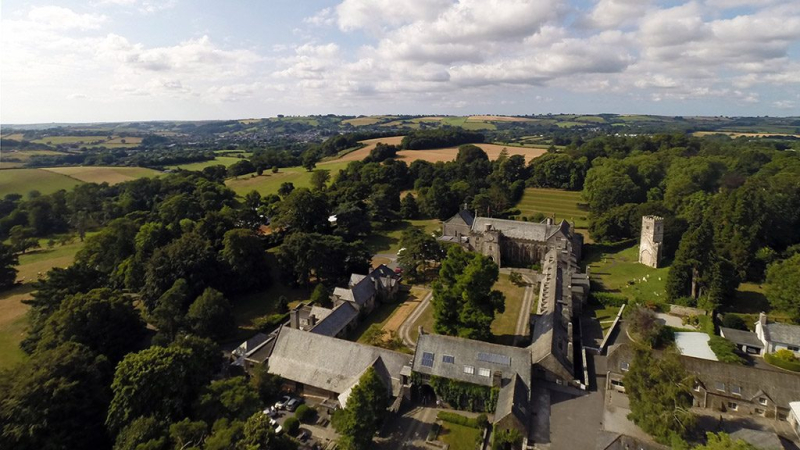 In addition to his other theatre work, Peter also gives solo performances of story-poems based on sagas and folktales at theatre venues and literary festivals in UK and abroad. His delightful rendition of Three Folktales (from the Italian tradition) will be of particular interest to the Mythic Arts community...as well as the Viking saga he is currently working on with Howard. (But more about that anon.) 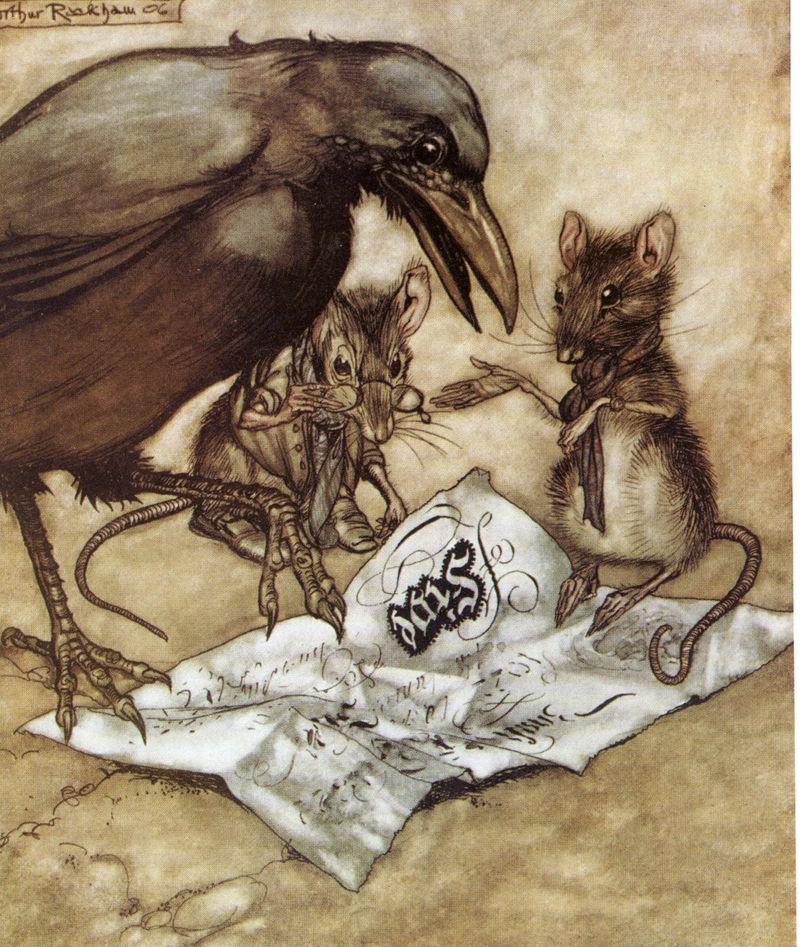 ...to everyone who has kept the conversation here going while I've been away, or ill, or otherwise distracted. I always read the comments under each posr, even when I fall behind on answering..and I'm grateful to all of you who take the time to write, kindly carrying the discussion forward when I can't carry it myself. 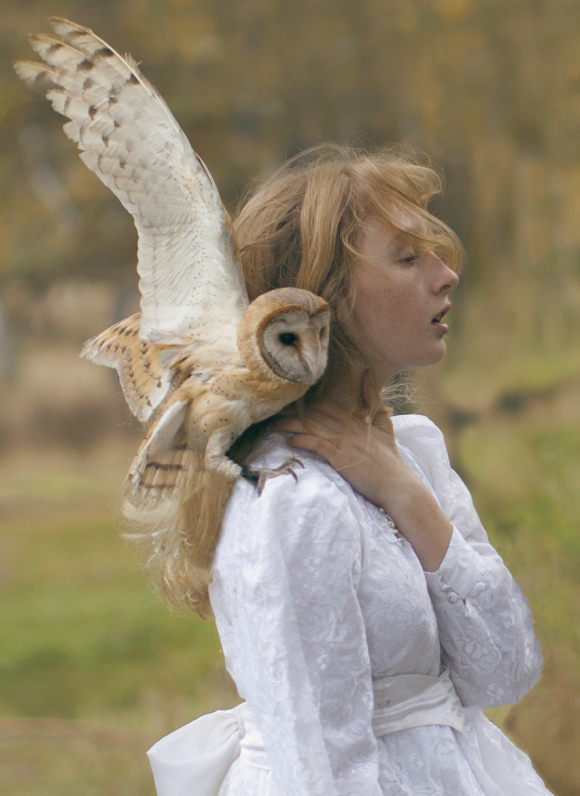 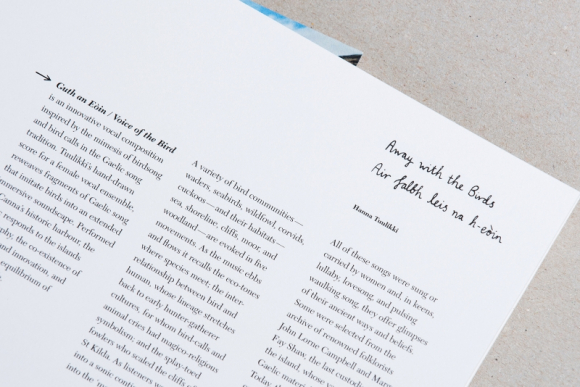 I'd like to follow up last week's music (classical compositions inspired by birds) with Hanna Tuulikki's Away With the Birds, a project exploring the mimesis of birds in Gaelic folk songs. Tuulikki is an English/Finnish artist based in Edinburgh, known for creating interdisciplinary works rooted in myth, folk history and the natural world. In the video below, she gives a talk explaining the genesis of Away With the Birds:

"The idea for the work grew out of an interest in music from around the world," Tuulikki says, "noticing that in cultures where people have an intimate connection with the land they are also good mimics of the sounds around them, and their music seems to grow directly from this relationship. I believe our music, and even our language, originated and evolved from our listening to the sounds of the animate landscape, or what eco-philosopher David Abram calls the more-than-human world. So I began a journey looking for this kind of sound-making process closer to home..."

To learn more about Away With the Birds, go here...and then follow the link at the bottom of the page to the project's interactive website, where you can explore "two hours of film, half an hour of music, over two hours of commentary, field recordings of over twenty birds, fifteen drawings, and audio recordings of nine Gaelic songs and five poems. "

The Wildscreen event where Tuulikki was speaking was a celebration of natural storytelling held in Glasgow, Scotland last May. In the video below, from the same event, Scottish singer Julie Fowlis performs two Gaelic songs about seals: "An Ron" and "Ann an Caolas Ododrum." She's accompanied by Donald Shaw (from Capecaille) on keyboard, backed up by gorgeous film clips of seals and shore birds from the BBC series Hebrides. 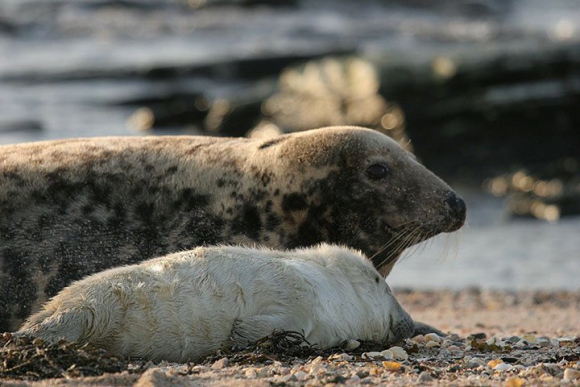 To end with, here's Julie Fowlis again, performing "Smeorach Chlann Domhnaill" at the Folk Awards in 2015. 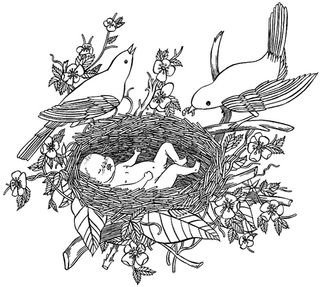 The song includes the following words (in translation):

A mavis, I, on a mountain top,
Watching sun and cloudless skies.
Softly I approach the forest
I shall live in otherwise.

If every bird praises its own land,
Why then should not I?
Land of heroes, land of poets...
The abundant, hospitable, estimable land. 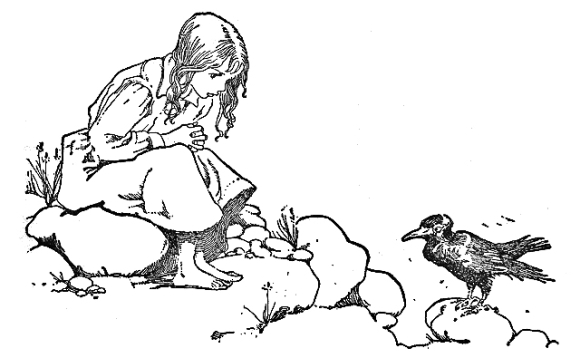 The image at the top of this post is by Russian surrealist photographer Katerina Plotnikova. The seal photograph is from the Hebrides tv series. The drawings are by Carson Ellis and Honor Appleton (1879-1951). More avian folk songs can be found in "Going to the Birds." For avian folklore:"When Stories Take Flight."

On the shores of mystery 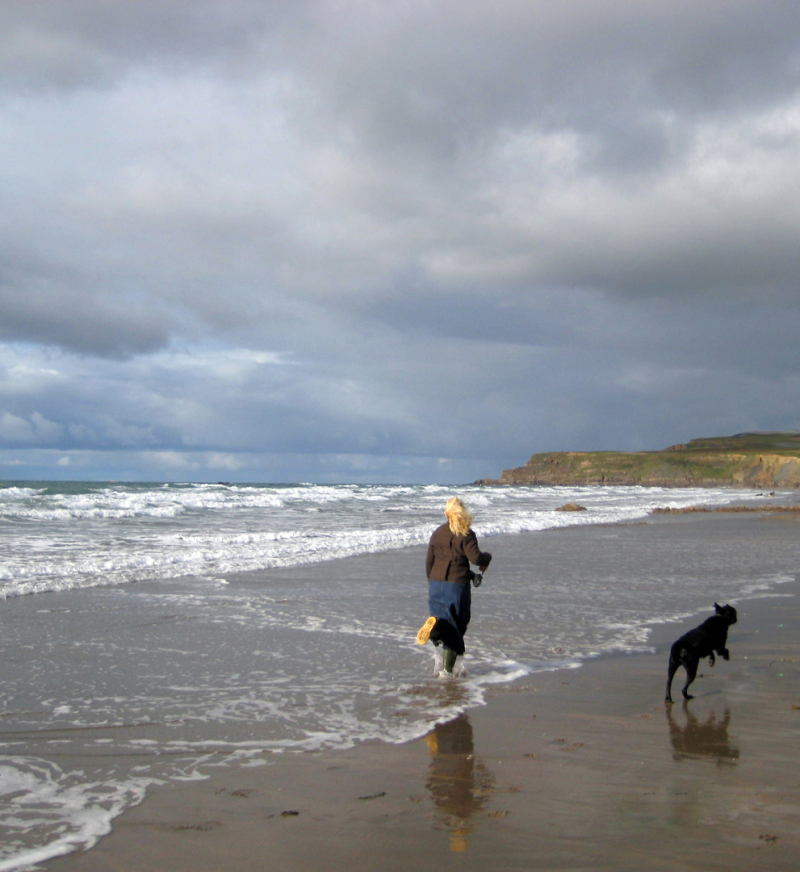 Here's one more passage from Kathleen Dean Moore's Wild Comfort: The Solace of Nature, which (as you may have guessed by now) I highly recommend:

"Some people suggest that science is the enemy of the sacred. This puzzles me. I suppose the argument is that the more we understand or think we understand, the smaller the realm of mystery becomes; under the hot light of scientific knowledge, the sacred warps and shrinks, like Styrofoam in flames. But this argument won't work because mystery is infinite, the only natural resource that humans can't exhaust in this giant fire sale we call an economy. 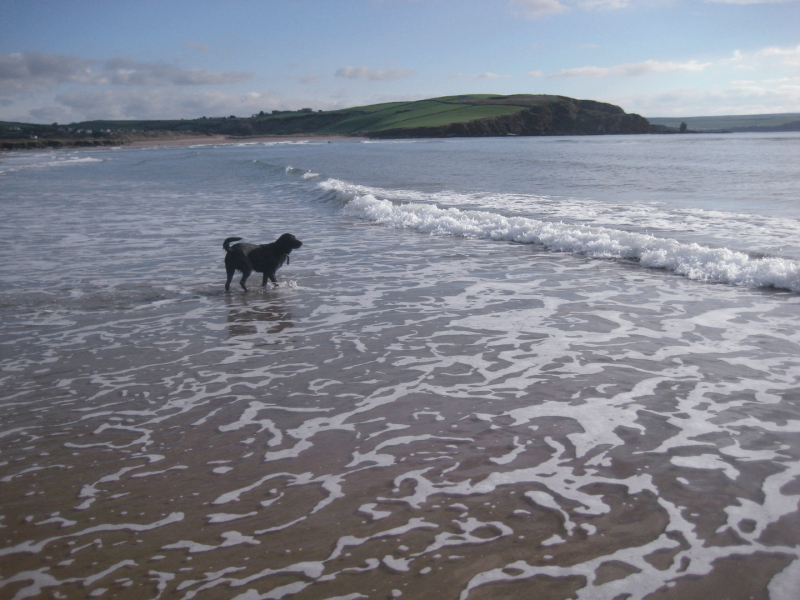 "The physicist Chet Raymo thinks of scientific understanding as an island in a sea of mystery. The larger the island, the longer its coastline -- that area where the deep sea of what we don't understand slaps and smacks at the edge of what we think we know, a rich place of bright water and dark, fecund smell. 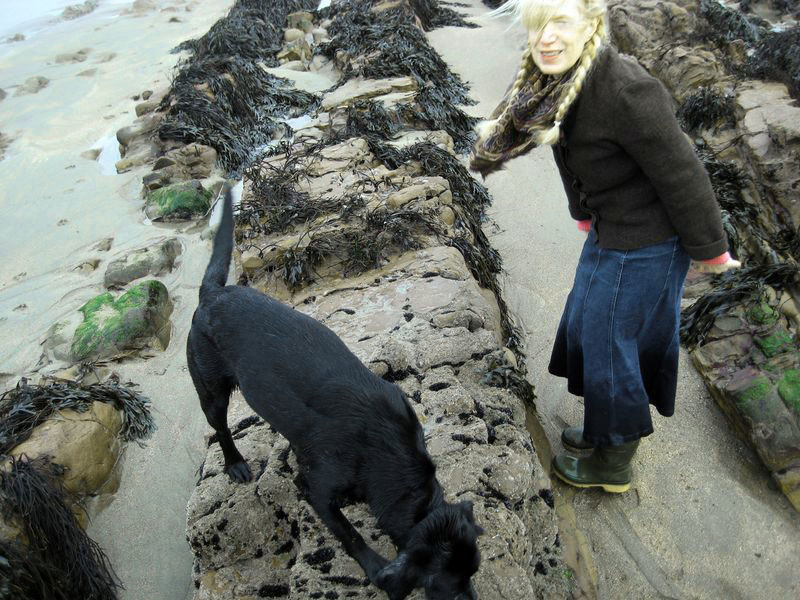 "If so, then this is our work in the world: to pull on rubber boots and stand in this lively, dangerous water, bracing against the slapping waves, one foot on stone, another on sand. When one foot slips and the other sinks, to hop awkwardly to keep from filling our boots. 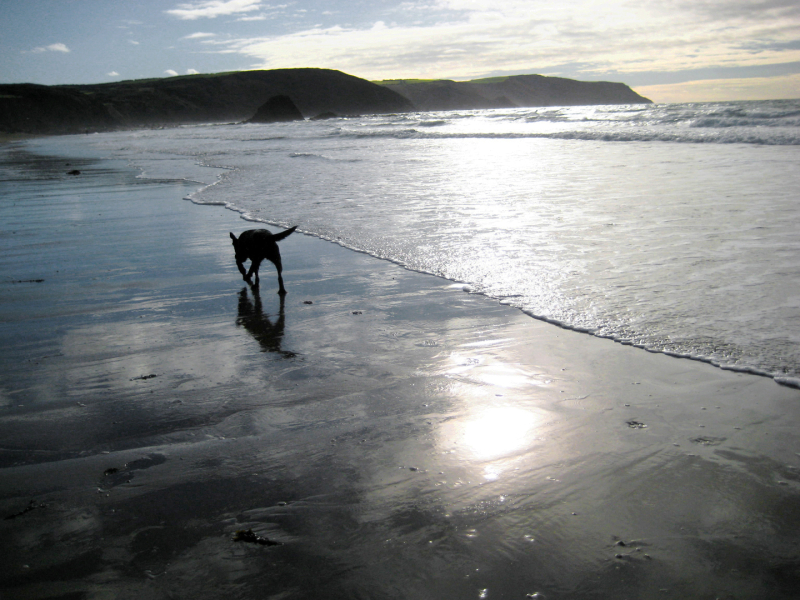 "To laugh, to point, and sometimes to let this surging, light-flecked mystery wash into us and knock us to our knees, while we sing songs of celebration through our own three short nights, our voices thin in the darkness." 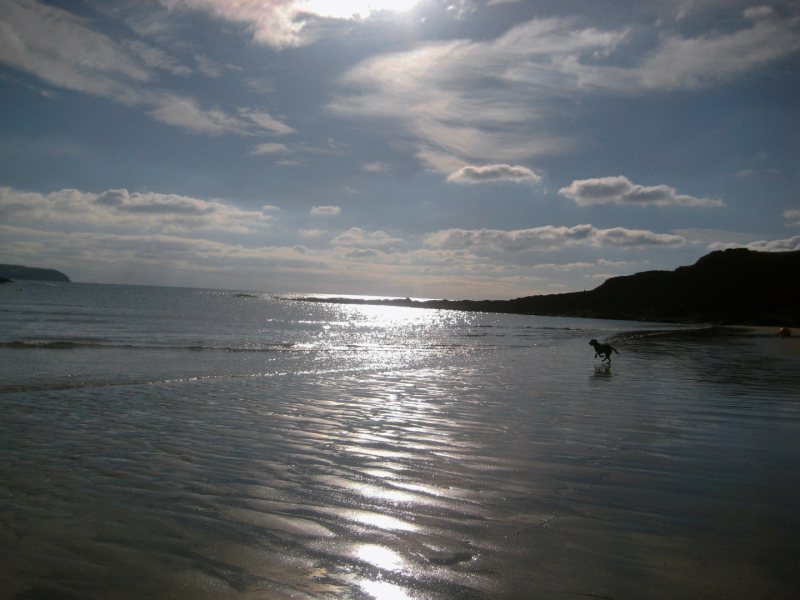 The passage above is from "The Time for the Singing of Birds" by Kathleen Dean Moore, published in her essay collection Wild Comfort (Trumpeter/Shambhala, 2010). The poem in the picture captions is an untitled shaman song by the 19th century Inuit oral poet Uvavnak, translated by Jane Hirshfield, from Women in Praise of the Sacred (HarperCollins Publishers Inc, 1994). All rights reserved by the authors. The photographs were taken on Devon/Cornwall north coast.

Floating on the pulse of the Earth 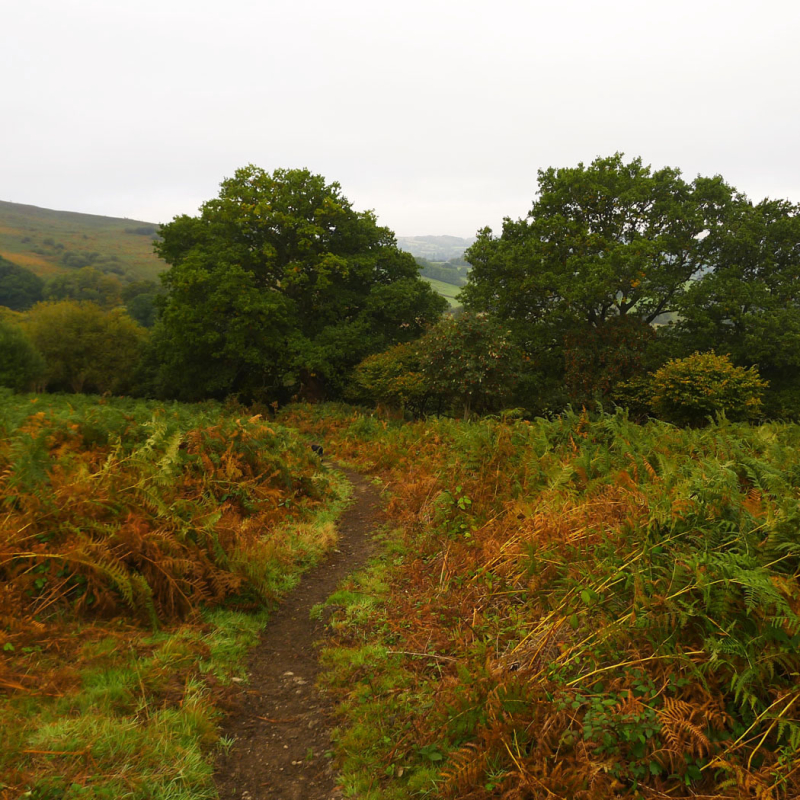 After a week's disconnection from the Internet and the news headlines, it was disheartening to return home again and find the world in worse shape then ever. The UK government's xenophobic pronouncements are truly frightening, the American election is even worse...while climate change roars on and refugees prepare for another hard winter, homeless and unwanted. I'd come back to Chagford feeling calm and restored by a week of solitude in nature, yet the tide of dreadful news threatened to sweep me back into a state of despondency.  The following passage by Kathleen Dean Moore steadied me, however, reminding me that hope and despair, happiness and sorrow, are cyclical things, like nature itself. There will be good news, there will be bad news, and we carry on: fighting the good fight and finding ways to make beauty, even out of the darkest of materials.

"I don't know what despair is," writes Moore," if it's something or nothing, a kind of filling up or an emptying out. I don't know what sorrow does to the world, what it adds or takes away. What I think I do know now is that sorrow is part of the Earth's great cycles, flowing into night like cool air sinking down a river course. To feel sorrow is to float on the pulse of the Earth, the surge from living to dying, from coming into being to ceasing to exist. 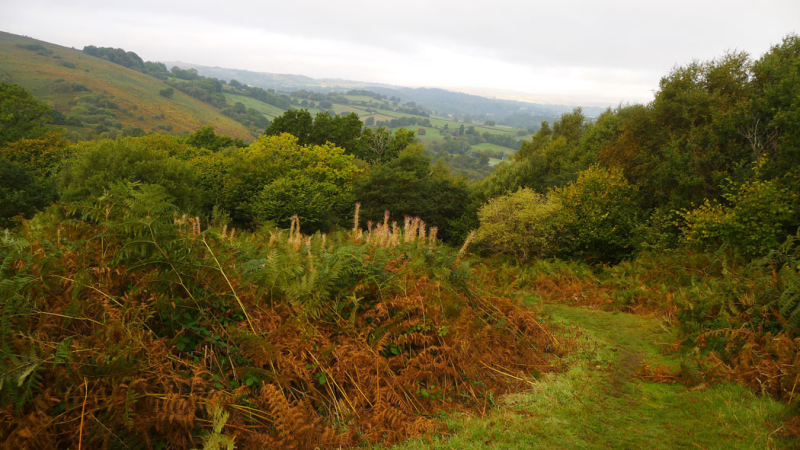 "Maybe this is why the Earth has the power over time to wash sorrow into a deeper pool, cold and shadowed. And maybe this is why, even though sorrow never disappears, it can make a deeper connection to the currents of life and so connect, somehow, to sources of wonder and solace. I don't know. 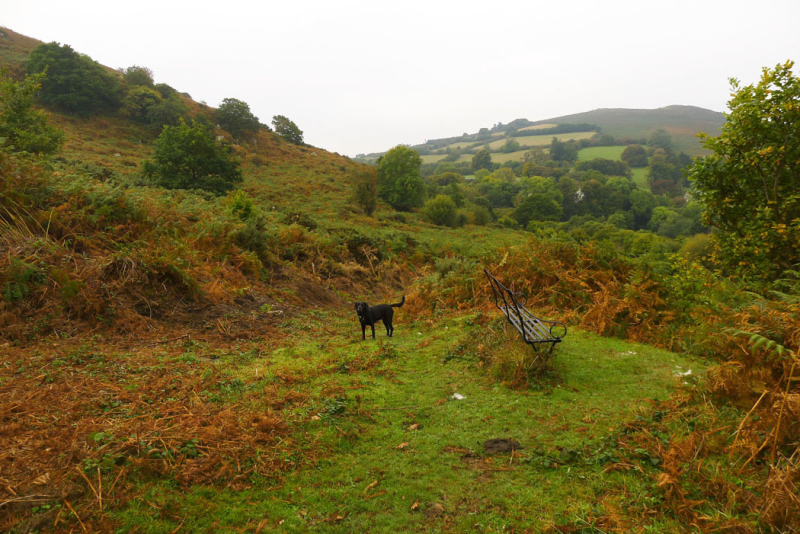 "And I don't know what gladness is or where it comes from, this splitting open of the self. It takes me surprise. Not an awareness of beauty and mystery, but beauty and mystery themselves, flooding into my mind suddenly without boundaries. Can this be gladness, to be lifted by that flood?" 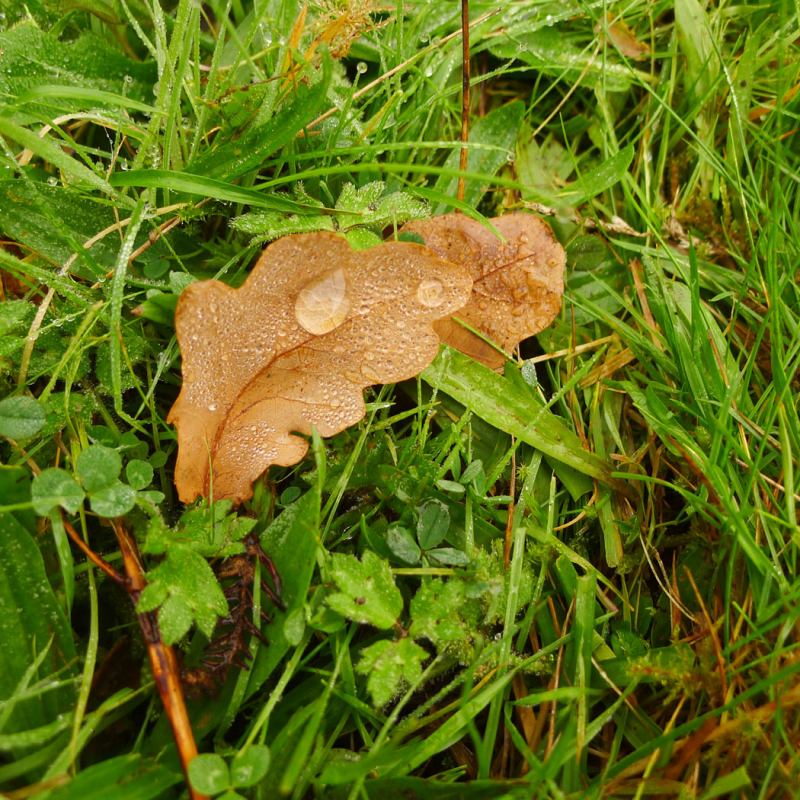 The passage is above is from the introduction to Wild Comfort: The Solace of Nature, essays by Kathleen Dean Moore (Trumpeter/Shambhala, 2010); all rights reserved by the author.

in Hope & Resistance, On beauty, On the creative process, Wild ethics | Permalink | Comments (34)