The Gift of Wild Time
An ode to slowness 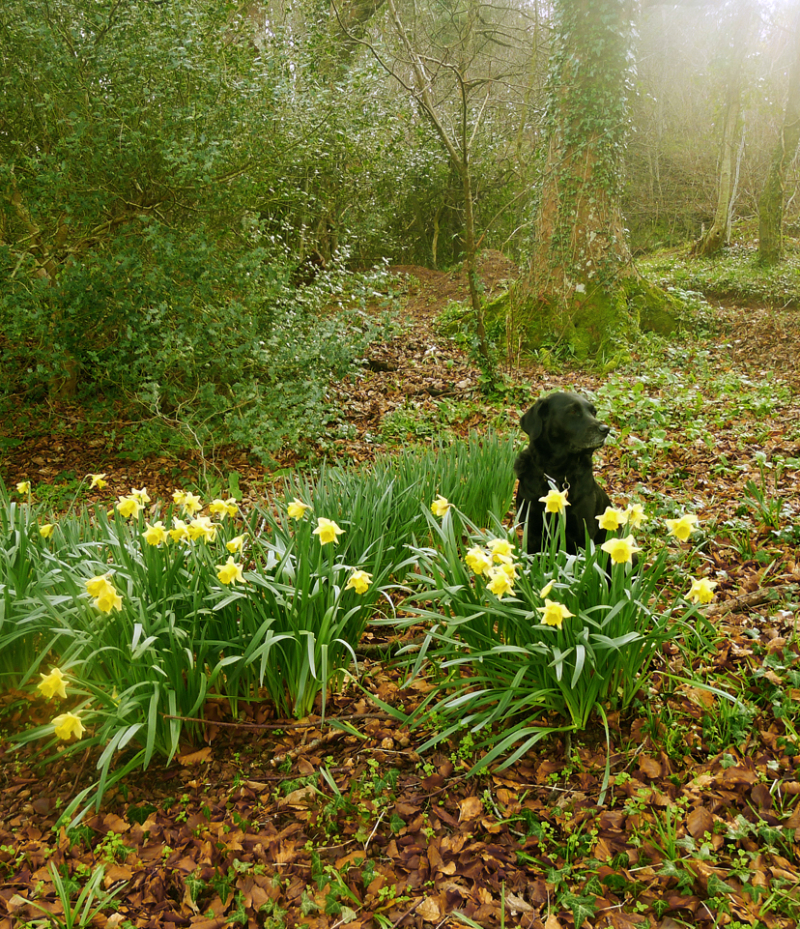 Spring is truly here, at long last. The earliest flowers in our garden have done their work to wake the land from sleep: the primroses and grape hyacinths, the purple aubretia climbing up the stone walls, the columbines that have seeded themselves and run riot on the hillside. The cherry trees have burst into bloom, with the apple and plum trees soon to follow. The woods behind the studio are golden with wild daffodils, which in turn will give way to the smaller pleasures of cranesbill, sicklewort, and bluebells. 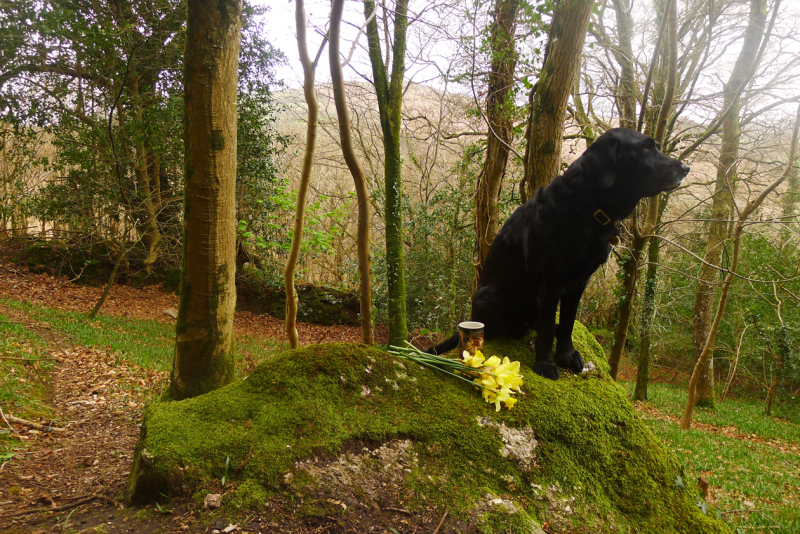 The movement of the landscape through its seasons reminds me of the energy and vitality to be found in cycles and circles...and as someone who works in the narrative arts, I find that I need that reminder.

Narrative, in its most standard form, tends to run in linear fashion from beginning to middle to end. A story opens "Once upon a time," then moves -- prompted by a crisis or plot twist -- into the narrative journey: questing, testing, trials and tribulations -- and then onward to climax and resolution, ending "happily ever after" (or not, if the tale is a sad or ambiguous one). In the West, our concepts of "time" and "progress" are largely linear too. We circle through days by the hours of the clock, years by the months of the calendar, yet our lives are pushed on a linear track: infant to child to adult to elder, with death as the final chapter. Progress is measured by linear steps, education by grades that ascend year by year, careers by narratives that run along the same railway line: beginning, middle, and end.

But in fact, narratives are cyclical too if we stand back and look through a broader lens. Clever Hans will marry his princess and they will produce three dark sons or three pale daughters or no child at all until a fairy intervenes, and then those children will have their own stories: marrying frogs and turning into swans and climbing glass hills in iron shoes. No ending is truly an ending, merely a pause before the tale goes on. 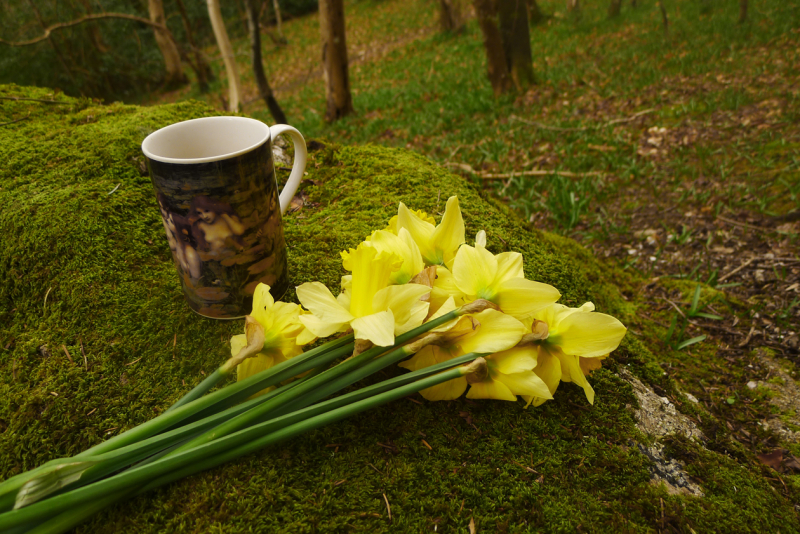 As a folklorist and a student of nature, I know the importance of cycles, seasons, and circular motion -- but I've grown up in a culture that loves straight lines, beginnings and ends, befores and afters, and I keep expecting life to act accordingly, even though it so rarely does. Take health, for example. We envision the healing process as a linear one, steadily building from illness to strength and full function; yet for those of us managing long-term conditions, our various trials don't often lead to the linear "ending-as-resolution" but to the cyclical "ending-as-pause": a time to catch one's breath before the next crisis or plot twist sets the tale back in motion.

Relationships, too, are cyclical. Spousal relationships, family relationships, friendships, work partnerships: they aren't tales of linear progression, they are tales full of cycles, circles, and seasons. The path isn't straight, it loops and bends; the narrative side-tracks and sometimes dead ends. We don't progress in relationships so much as learn, change, and adapt with each season, each twist of the road. 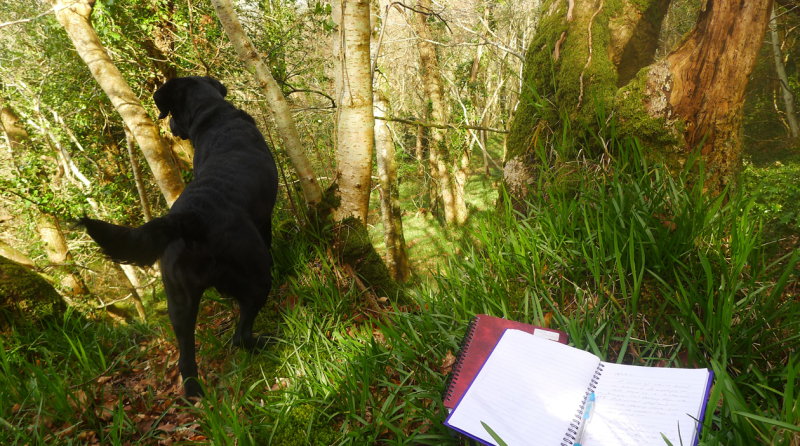 As a writer and a reader, I'm partial to stories with clear beginnings, middles, and ends (not necessarily in that order in the case of fractured narratives) -- but when I'm away from the desk or the printed page (or the cinema or the television screen), I am trying to let go of the habit of measuring my life in a strictly linear way. Healing, learning, and art-making don't follow straight roads but queer twisty paths on which half the time I feel utterly lost...until, like magic, I've arrived somewhere new, some place I could never have imagined.

I want especially to be rid of the tyranny of Before and After. "After such-and-such is accomplished," we say, "then the choirs will sing and life will be good." When my novel is published. When I get that job. When I find that partner. When I lose ten pounds. No, no, no, no. Because even if we reach our goal, the heavenly choirs don't sing -- or if they do sing, you quickly discover it's all that they do. They don't do your laundry, they don't solve all your problems. You are still you, and life is still life: a complex mixture of the bad and the good. And now, of course, the goal posts have moved. The Land of After is no longer a published book, it's five books, a best-seller, a major motion picture. You don't ever get to the Land of After; it's always changing, always shimmering on the far horizon.

I don't want to live after. I want to live now, moving with, not against, life's cycles and seasons, the twists and the turns, the ups and the downs, appreciating it all. 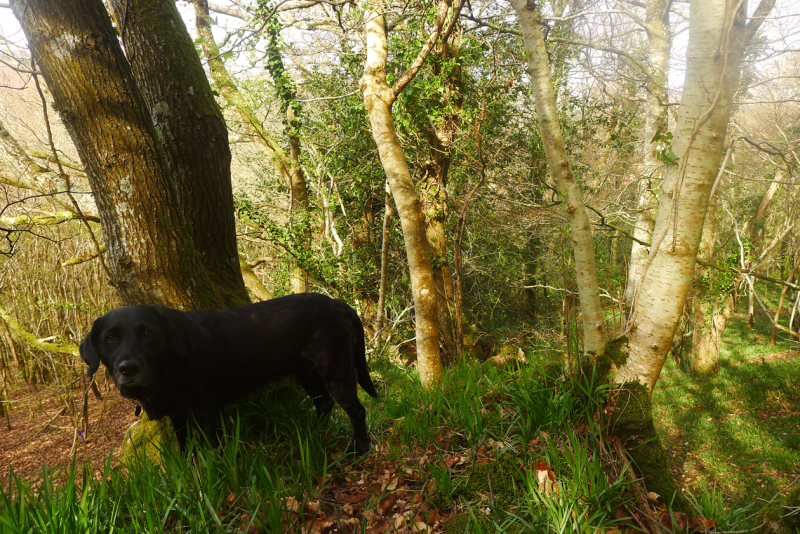 Today, I walked among spring's first flowers, chose a few to bring back to the studio -- where they sit on my desk in a pickle jar, glowing as bright as the sun and the moon. At my desk, I work in a linear artform, writing words in a line across a ruled page -- and the flowers remind me that cycles and seasons should be part of the narrative too. Circular patterns. Loops and digressions. Tales that turn and meander down paths that, surprise!, are the paths that were meant all along. Stories that reach resolutions and endings, but ends that turn into another beginning. Again. Again. Tell it again. 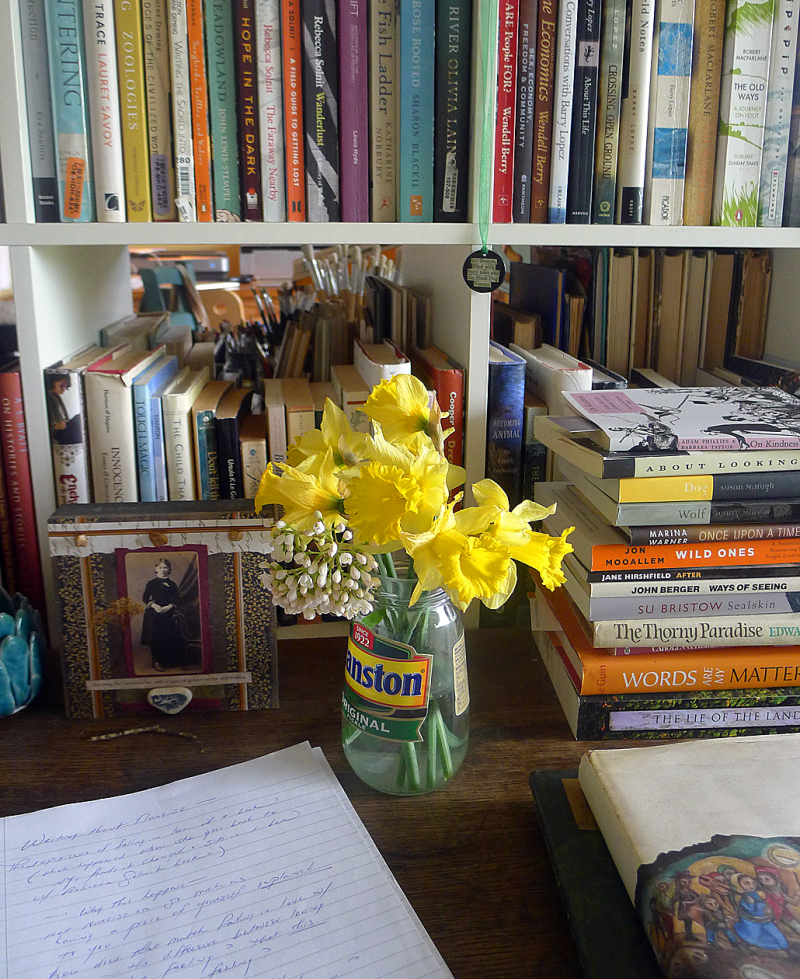 The poem in the picture captions is from Bitter Angel by Amy Gerstler (North Point Press, 1990); all rights reserved by the author.

in On the creative process, On writing | Permalink | Comments (10)

Green shoots do it,
poking at the end of cold.
Flowers do it,
making the world unfold.

Skies do it,
with canopies of blue.
Rivers do it,
rilling as they run through.

Grass does it
with its underfoot green.
Moles do it
with their humps between.

Hill does it
with its gentle slope.
And we folks do it
sewing seeds of hope.

"No ending is truly an ending, merely a pause before the tale goes on." Yes! Maybe this mantra comes with the aging process. If that is the truth of it, I for one am, truly thankful, to have come of age.

A very lovely look at your edge of world at springtime, thank you.

Terri, your thoughts on cycles align with my meditation this morning, and also speak to the narrative I am writing, which seems to be resisting a linear form. The more I try to make it be so, the more I have the feeling of "going in circles." Maybe it is time to take those bits I put aside and follow them in the circular way they are insisting on, to see where they lead. Thank you for the inspiration, and support for my intuition.

A very wise post and one I should take note of, especially the part about not waiting for the 'after' (still hoping maybe.)

"I am trying to let go of the habit of measuring my life in a strictly linear way. Healing, learning, and art-making don't follow straight roads but queer twisty paths on which half the time I feel utterly lost...until, like magic, I've arrived somewhere new, some place I could never have imagined." Thank you, Terri! I needed this reminder.

Oh yes, we folk do it sewing seed of hope!

I had to research Amy Gerser! I just was knocked out of her wit and charm! Another gift from Terri!

Not only do these beautiful examples of yours wake the land, they also wake the senses of the reader. I love how you pick up on the minor and the larger details of the landscape that awaken and revive the land. And perhaps, the most transformative/blessed aspect of this awakening is how humans sew each day with seeds of hope. I believe our efforts and spiritual awareness is also felt in the spirit of the land. Thank you for this lovely poem!! As always I thoroughly enjoy your work and perspective!

Love that last line, Jane. And the rivers rilling. <3

So wonderful, Terri. I especially cherish these posts that are rich with your own language and thoughts. That last paragraph is perfect.