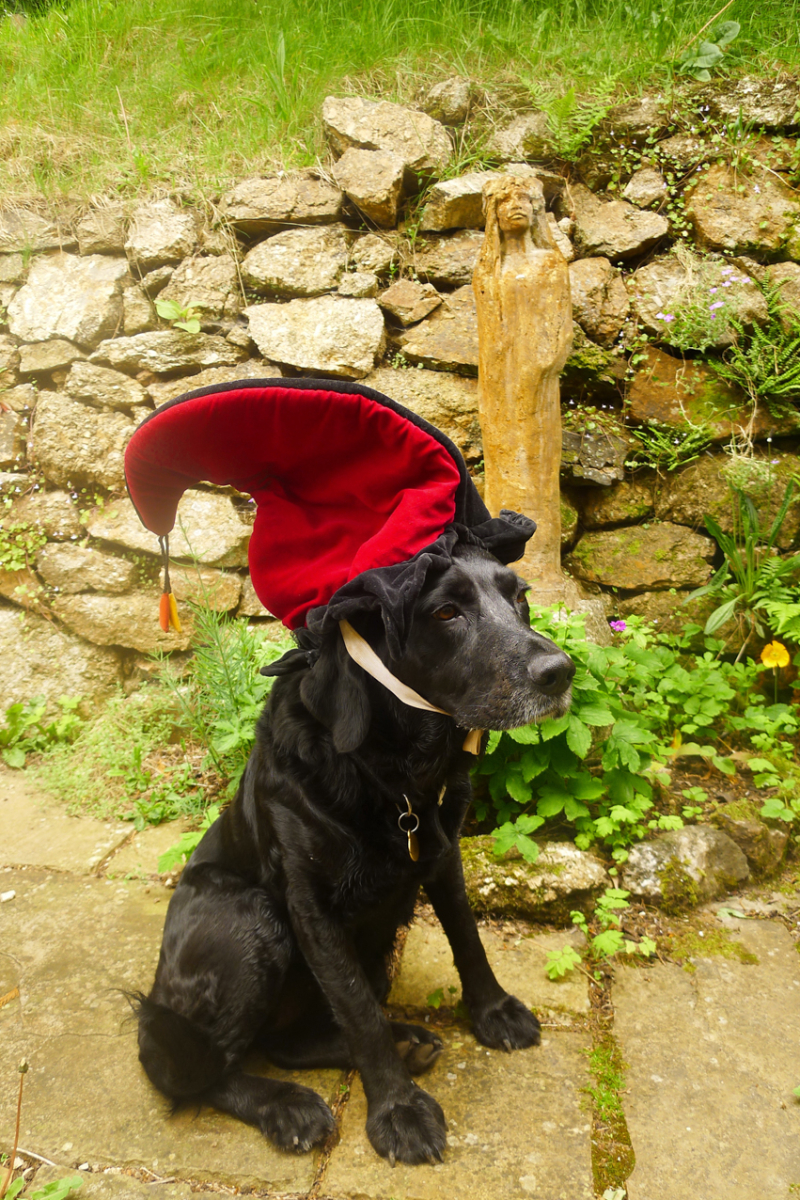 Howard has gone off to London for a month, where he's teaching Commedia dell'Arte at the East 15 Acting School. We had the usual flurry of getting him packed and on the road, with one suitcase full of masks and another full of books. Afterwards, as I was tidying up, I found a pile of discarded costumes on a chair, including a couple of Jester caps. Then I had a wicked thought and whistled for Tilly....

It's a good thing she's such a good sport. 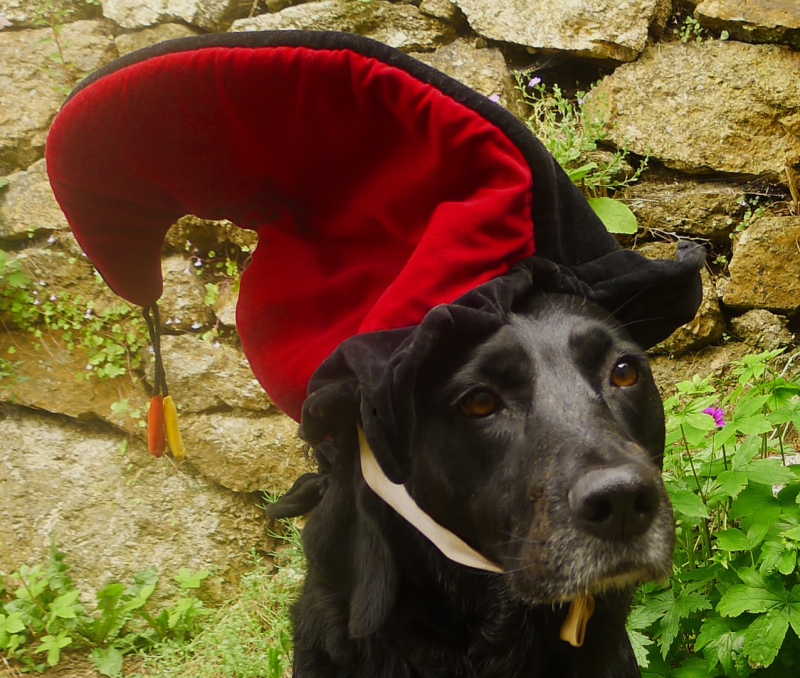 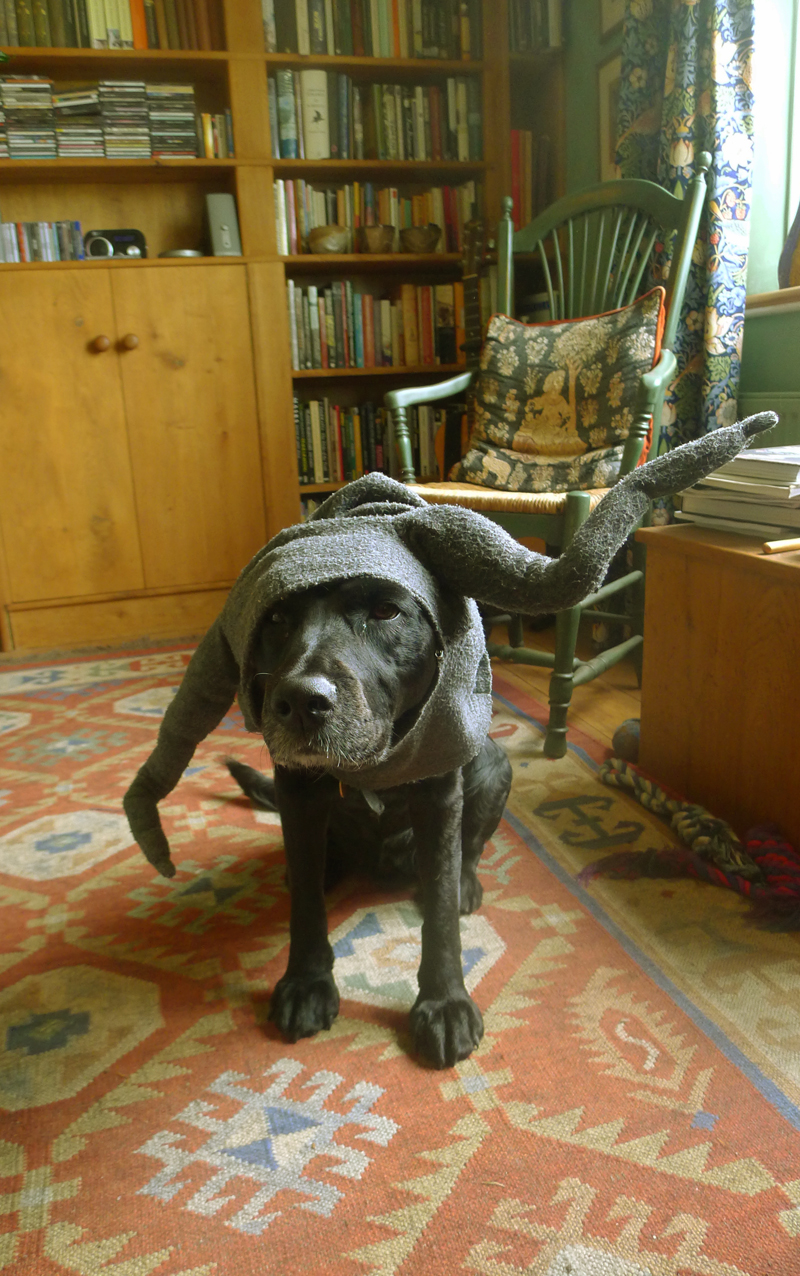 For a fascinating piece on the mythic roots of comedy, clowning, and Commedia, I recommend "A Chorus of Clowns and Masked Comic Theater" by my friend Midori Snyder.

"Humor is an old response to fear of the unknown and contempt for the familiar," she writes. "For 3,000 years, somewhere a chorus of clowns has misbehaved, and in their audacity, called down gods, heroes, and legends for a face to face meeting with humanity, offering laughter as a form of reverence." 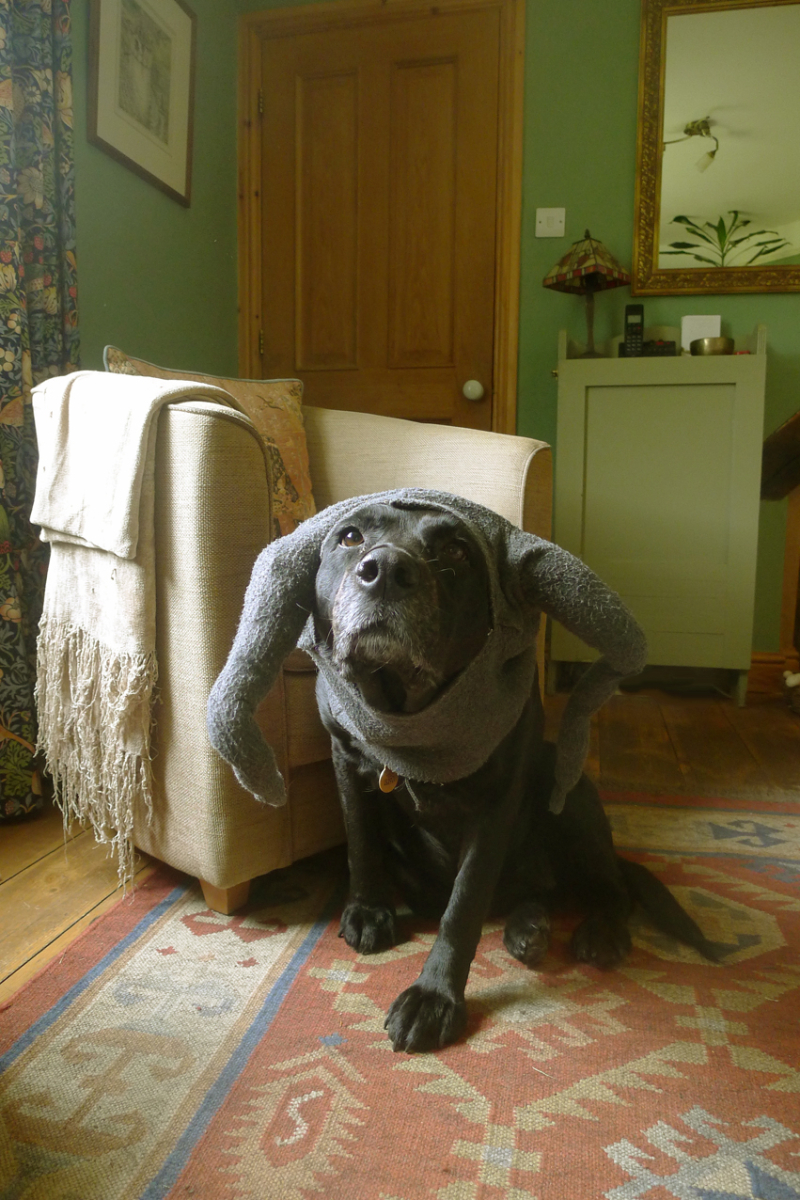 "You will do foolish things, but do them with enthusiasm."  - Colette Disclaimer: no hounds were harmed in this portrait session. She was paid Equity rates in dog treats for her work. 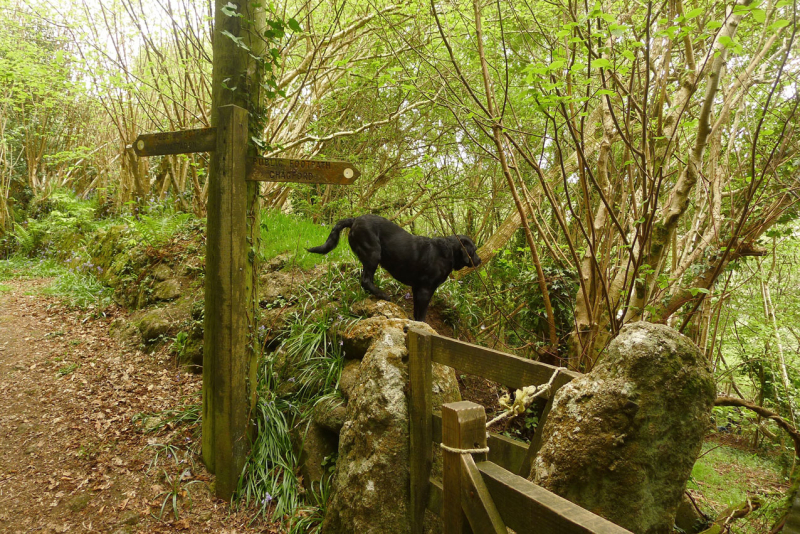 Here's another interesting passage for our on-going discussion of 'writers and place" -- from an essay by Susan Cooper, the British-born author of The Dark Is Rising series:

"When I was twenty-six years old," she writes, "I left every aspect of home: place, friends, occupation, nation -- the lot, and I married an American and came to live in the USA. If put back in the same situation, I should probably do the same again, but I wouldn't say it was a reasoned choice. When you are uprooted in this way, and leave home completely and suddenly, what you leave is not a place only, but the whole fabric of life. You leave the sights and sounds and smells of your native environment, familiar and reassuring; the particular patterns of day and night, climate and weather, roads and rivers, and above all, people, all the different layers of relationships. You lose things you had never realized you possessed: a way of thinking, an ingrained pattern of assumptions and prejudices, and of delights felt never so acutely as when they are no longer there. Of course, you gain things too, but they don't fill these particular holes, because they are a different shape." 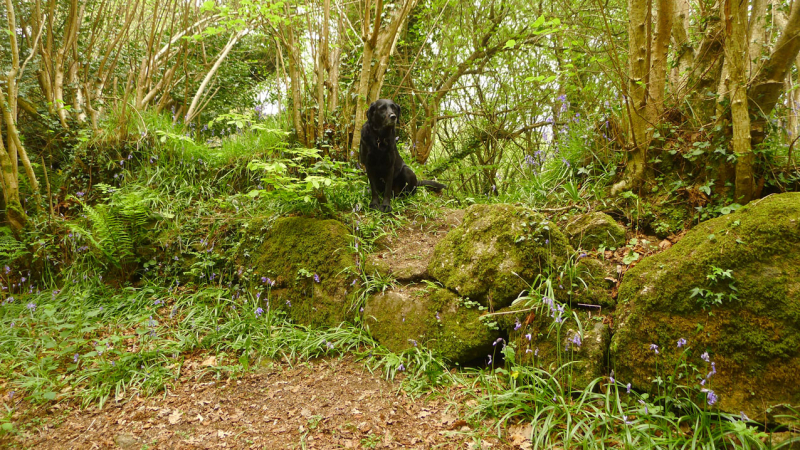 A little later in the essay, Cooper adds:

"I can tell you a lot about homesickness; I am an expert on the matter of living and loving across a divide, on the kind of ache that is bearable only because its absence would signify emptiness, the loss of all feeling. The Welsh call this ache hiraeth, and by that word they mean something more than homesickness: they mean a kind of deep longing of the soul. They guard the value of the word, and are contemptuous of those who use it lightly....My Dark is Rising books were written out of hiraeth, the longing; it infuses every image and description in them. 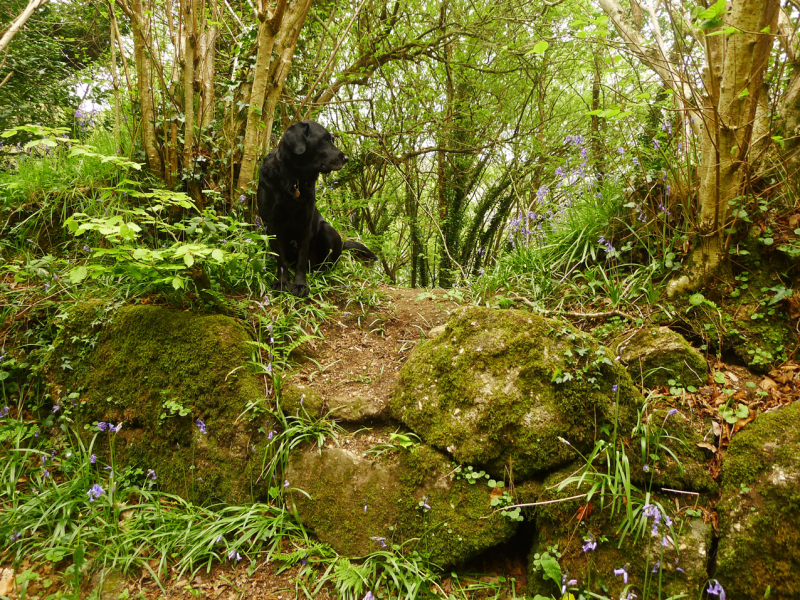 "Like many authors published for children, I've often said I don't write for children, but for myself, and in the case of these books it's especially true. It's true, that is, of the last four of the five books in the sequence, which were written after I'd lived for more than ten years in the United States. These four are quite different from the first book, Over Sea, Under Stone, which was written when I still lived in London. (For one thing, they're better books, and I should hope so after ten years of practice. The worst thing you can ever say to an author is, 'Oh, my favorite of all your books is the first' -- it's like telling him that his whole life has been a downhill slide.) Those last four Dark is Rising books are layered with Englishness and Welshness, the two sides of my mongrel British nature; they're full of the history and geography of the British Isles, their time and place, their people and weather and skies and spells, all echoing to and fro. I couldn't live there in reality, so I lived there in my books. Perhaps the sequence put hiraeth to rest, in its most painful and acute form, because I seem not to have written anything about Britain since, except for three small retellings of folktales. 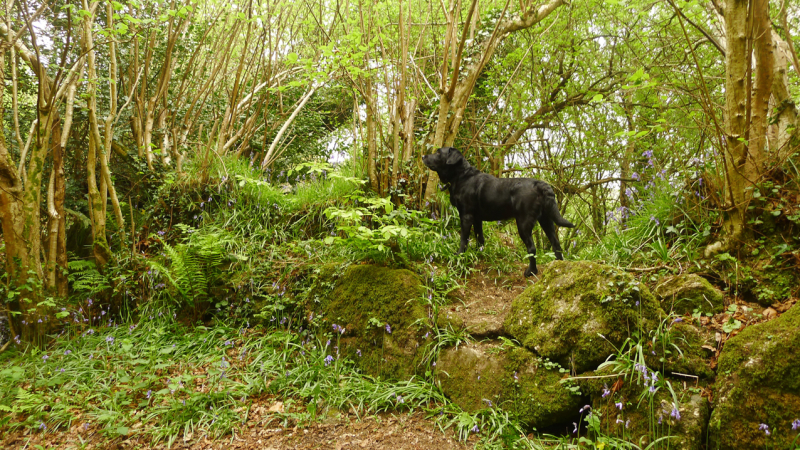 "Everyone leaves the first home. Time passes, nothing stays the same. We all leave childhood behind, even though that process may take decades, and not really be completed until our parents die. It's not an easy process; perhaps there's no such thing as easy growth, unless you're a dandelion. It isn't easy because you have to fight all the way against the pull of home. 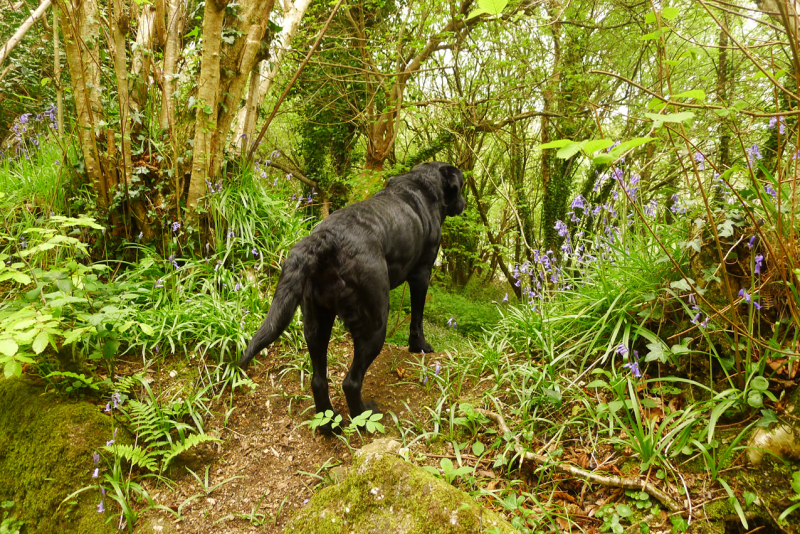 "Not all the aspects of that world are warm and cozy," Cooper cautions; "there are many that are sinister. There's home as octopus, home as snare; home as Venus Flytrap, home as black hole. Home can be the place you can't escape from, or haven't the courage to leave or replace; the womb you have never really left. This is the dark side of home, and we should never lose sight of it, in a romantic haze of nostalgia.

"If one is to grow, home has to be replaced, over and over again, in a progression through life." 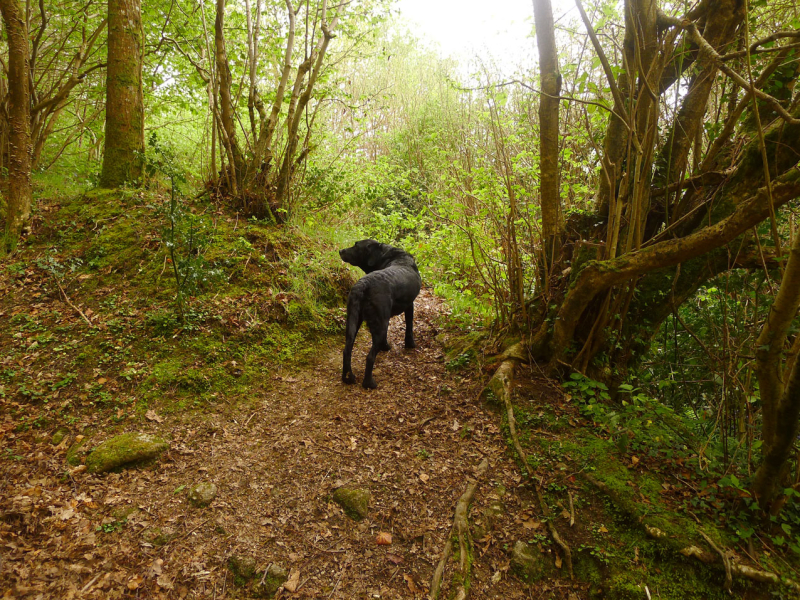 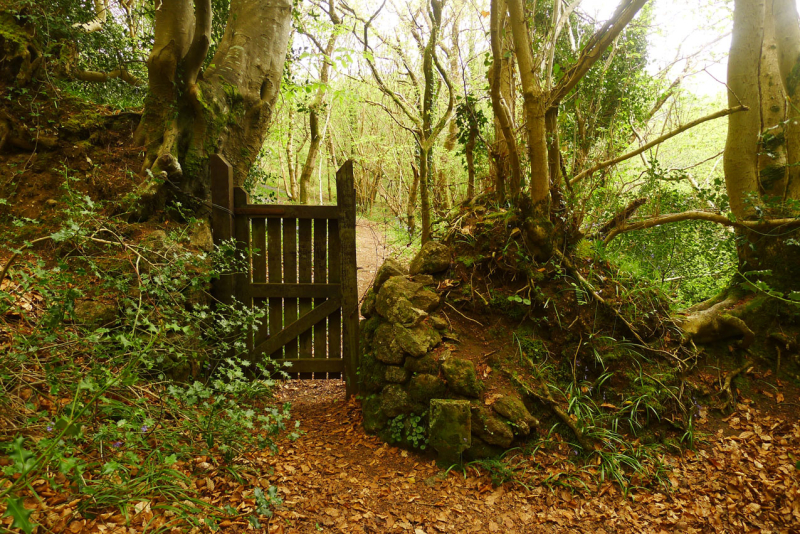 Credits: The passages above are from "Moving On," published in Dreams and Wishes: Essays on Writing for Children by Susan Cooper (Margaret K. McElderry Books, 1996). The exquisite poem in the picture captions is from Selected Poems by Gillian Clarke, who is currently the National Poet of Wales (Picador, 2016). All rights reserved by the authors. Related posts: Kith and Kin and On Loss & Transfiguration. (For more on the subject of stories, place, and home, click on the "home &  homelessness" link below.) 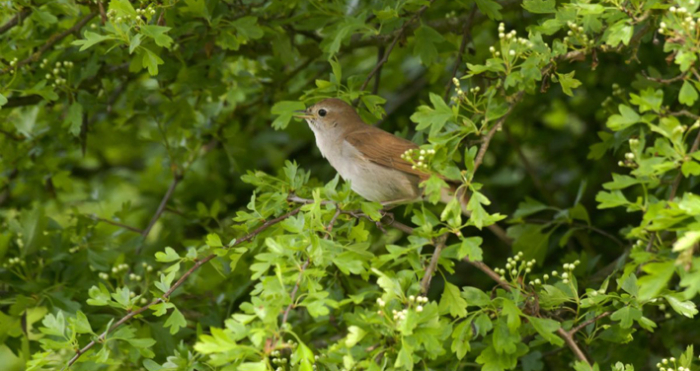 Today's music comes from the brilliant British folk singer and folk song collector Sam Lee. I'm completely in love with this young man's music -- as well as with the wide variety of collaborative projects he instigates or contributes to. If you ever have the chance to see him live, please don't miss it.  His recordings of old ballads and Gypsy Traveller songs are wonderful, but hearing them live -- as they are meant to be heard -- is just extraordinary. 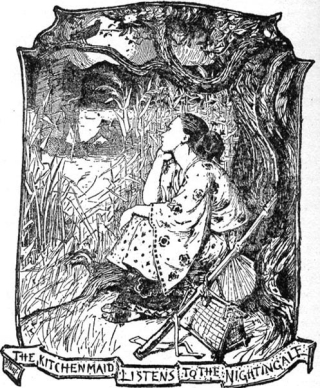 Above: A BBC profile of Lee's "Singing With the Nightingales," an annual series of events in which folk, classical, and jazz musicians collaborate with nightingales in their natural habitats. As the website explains, guests at the nightingale gatherings are invited "not just to listen to these birds in ear-tinglingly close proximity, but to share an evening around the fire, delving into your hosts’ and guest musicians' own funds of rare songs and stories." After supper by the fire, the small audience for each event is lead "in silence and darkness into the nightingale’s habitat, not only to listen to these majestic birds, but to share in an improvised collaboration; to experience what happens when bird and human virtuosi converge in musical collaboration."

Below: "One Morning in May," a traditional British song performed by Lee and Kathryn Tickell (on Northumbrian smallpipes) for BBC Radio 3.

Above: "Blackbird," a traditional British Traveller song peformed by Lee in Amsterdam -- with Jonah Brody on piano, Joshua Green on percussion, amd Flora Curzon on violin.

Above: "Lovely Molly," a gorgeous rendition of a Scottish Traveller song by Lee, Brody, and Green for The Lullaby Project at the Howard Assembly Room in Leeds.

Above: "The Blind Beggar," performed by Lee with Lisa Knapp and Nathaniel Mann at the Foundling Museum in London as part of their Broadside Ballads project. A broadside, the three musicians explain, "is a single sheet of inexpensive paper printed on one side, often with a ballad, rhyme, news and sometimes with woodcut illustrations. Broadside ballads, from the sixteenth to twentieth centuries, contain words and images once displayed and sung daily in Britain’s streets and inns. Although part of living traditions of folksong, popular art and literature, these illustrated printed sheets are now rare and preserved in only a few libraries." In developing the project, they spent time researching the ballads at the Bodleian, and then created new contemporary arrangements for these historic songs.

Below: "Lord Gregory" (Child Ballad #76) performed by Sam Lee with the Choir of World Cultures (directed by Barbara Morgenstern) from Berlin. 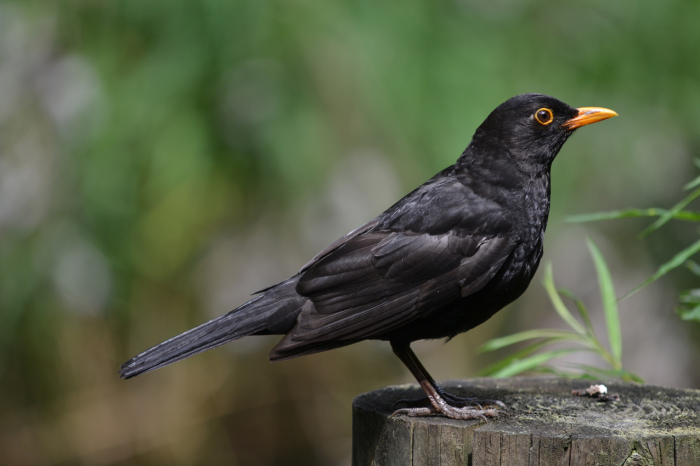 For more on Sam Lee's work with Gyspy ballads, see this previous post from 2015,  and a video talk about his work here.

The strength of oaks 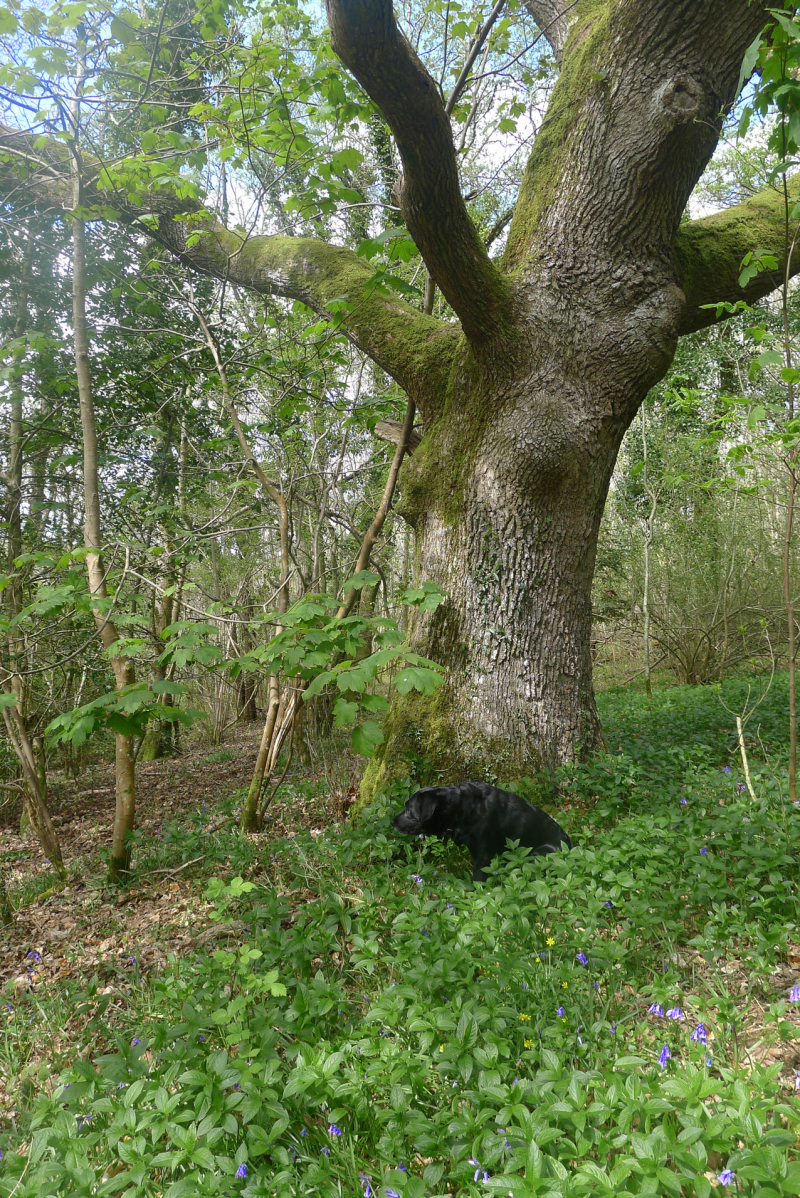 It's been another week in which family and health matters have kept me out of the studio -- my apologies. As I despair about missing so much work time, I've been thinking about this quote from painter Vincent Van Gogh:

"It is good to love many things, for therein lies the true strength, and whosoever loves much performs much, and can accomplish much, and what is done in love is well done." 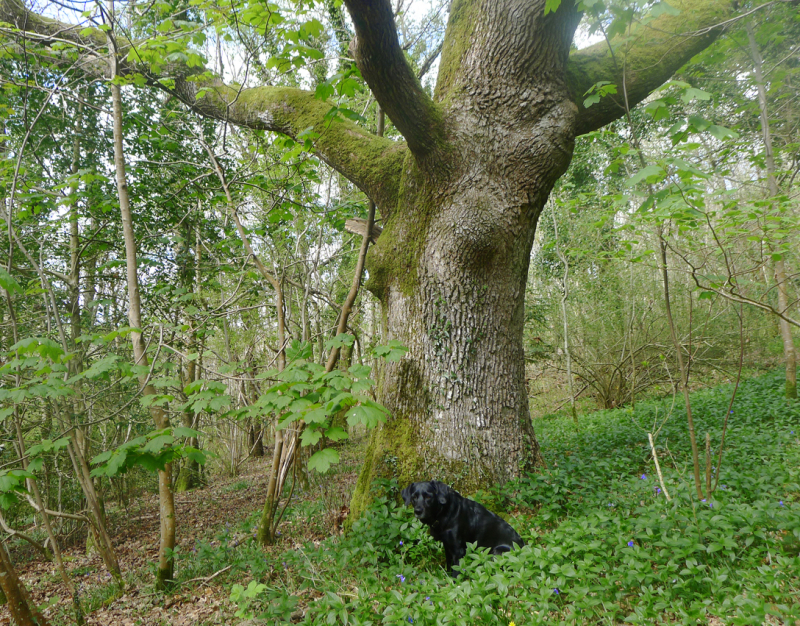 Above: "The Holland Hankerchief" (Child Ballad #272) performed by The Morning Tree, an Irish-Italian-American folk trio based in Dublin. The group consists of Eoghan O’Shaughnessy (guitar), Consuelo Nerea Breschi (fiddle and bouzouki), and Lindsay Straw (guitar and bouzouki).

Below: The magical video for "Hiljainen Suru," a Finnish folk song, by Slow Moving Clouds, a Dublin trio that draws inspiration from both the Irish and Nordic traditions: Danny Diamond (fiddle) and Kevin Murphy (cello), and Aki (nyckleharpa). 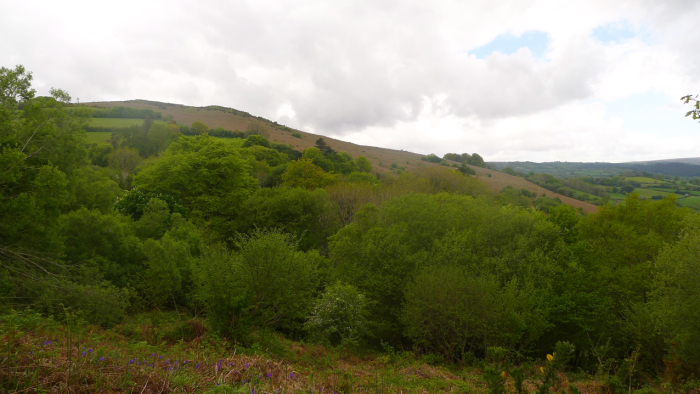 And an instrumental piece to end with: "Devil's Polska" by Slow Moving Clouds.