Returning to work
The Writing Life 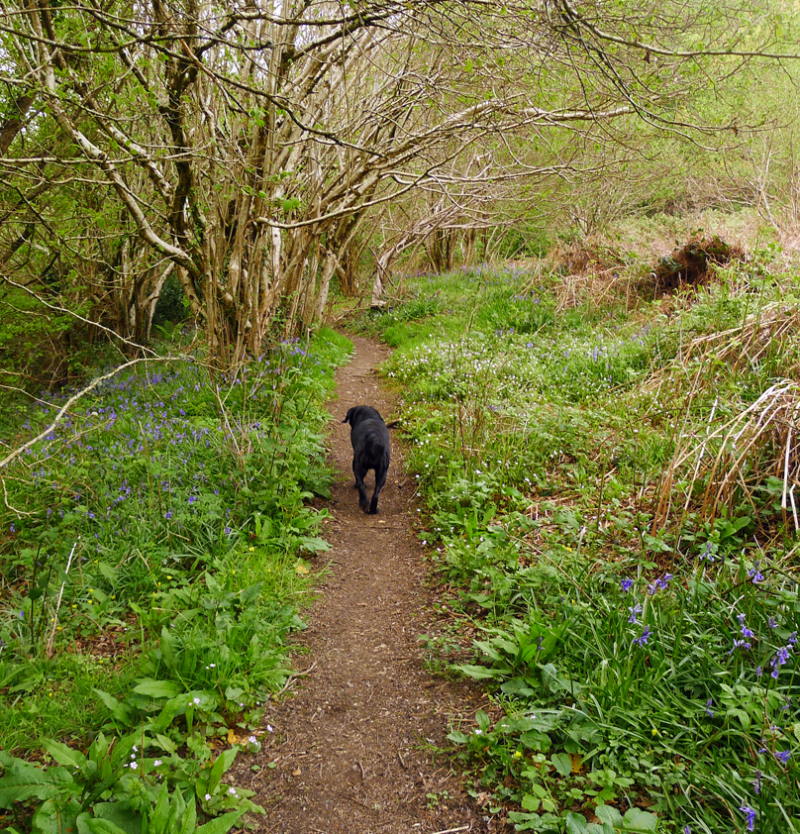 "I suppose that it is because literature is so abstract that people evince so little common sense about it. For children's writers, like other writers, practice a craft. I don't imagine many people think that a children's doctor need not be so good at medicine as his colleagues, or that a carpenter who 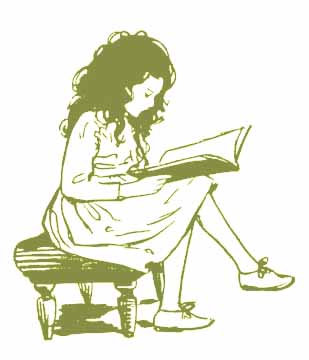 makes toys can manage with shoddy joinery. The truth is that a book which is bad literature just doesn't have much effect of any kind; doesn't work for anyone, young or old. Like any other writer, a children's writer has got to be good.

"It isn't even true that there is somehow a different sort of goodness appropriate to children's books. The problems and the satisfactions of the writer-craftsman working for children are mainstream problems, mainstream satisfactions. I am taking it for granted that an adult writer will seek to embody and communicate adult insights in his books, will not solve problems by talking down to his audience. That being so, one might think that the writer for children has a much greater problem in getting himself understood. But that thought underestimates children, and over-values understanding. 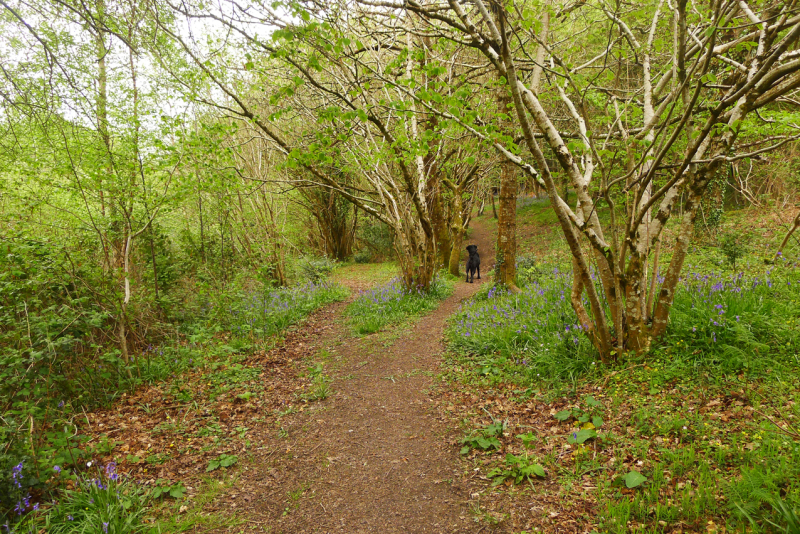 "One doesn't specially want a child reader to understand intellectually, to (as it were) decode the message in a work of fiction. After all, he doesn't -- God keep us from it! -- have to sit an examination on his reading. It is enough, it is better, if the reader simply experiences a book, simply feels it. And a reader can feel truly on a very partial understanding. 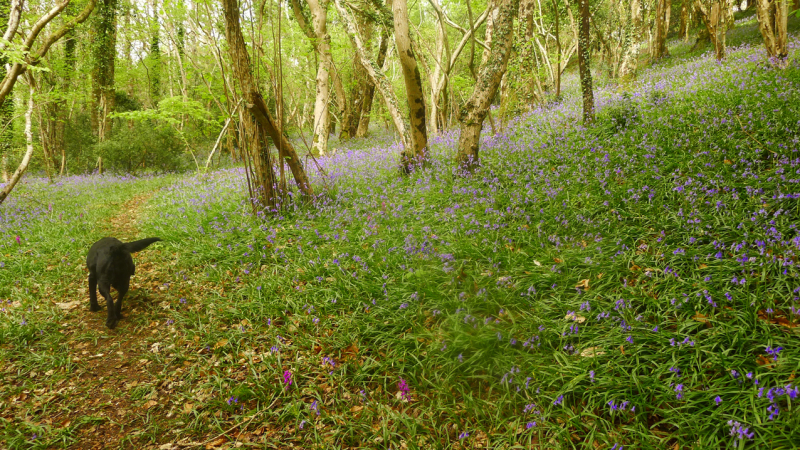 "I will instance my own children, watching the televised War and Peace. When Natasha met clandestinely with Kuriagin they became deeply agitated. She couldn't! -- what would happen? -- what about Prince Andre? -- oh dear no! Of course, they couldn't understand the passion that motivated Natasha; they saw it entirely as a question of loyalty. But it is that, among other things. They see only a part of the whole, but what they do see is seen truly, not in distortion. 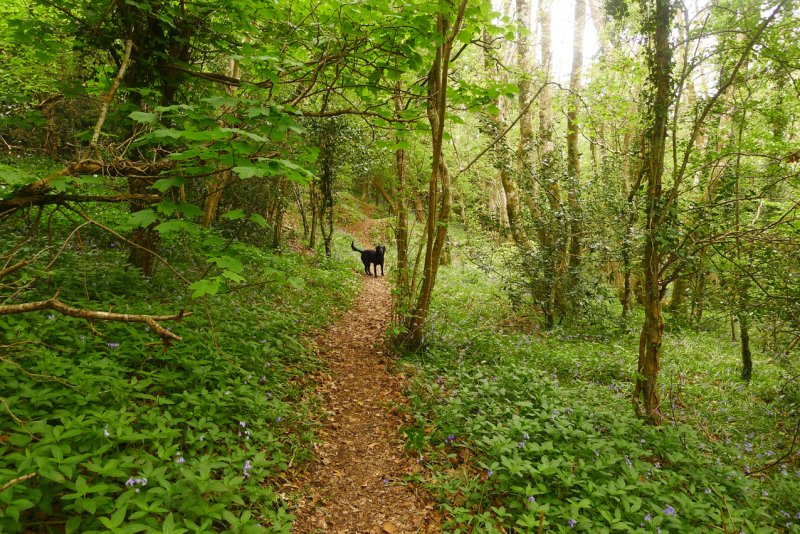 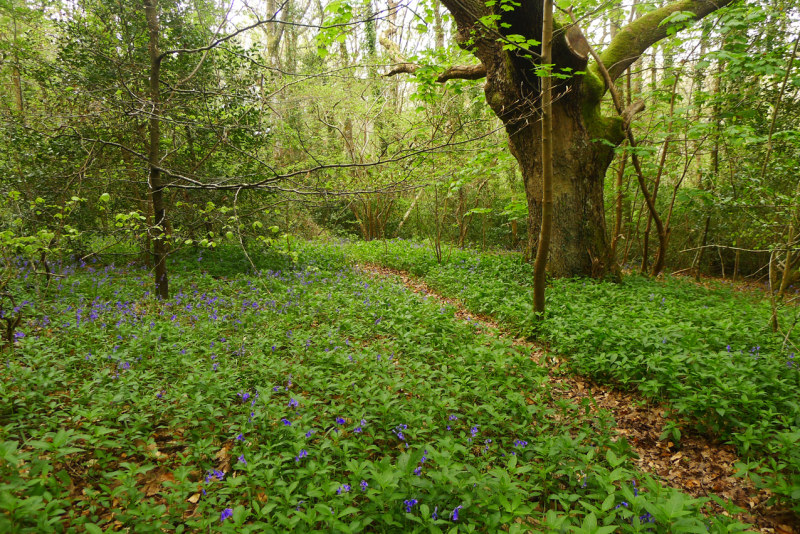 "Fully understanding a book is too often like being led forward in front of a pointilliste painting, and shown how the green is made up of spots of pure blue and pure yellow. One 'understands,' but one can no longer see green. 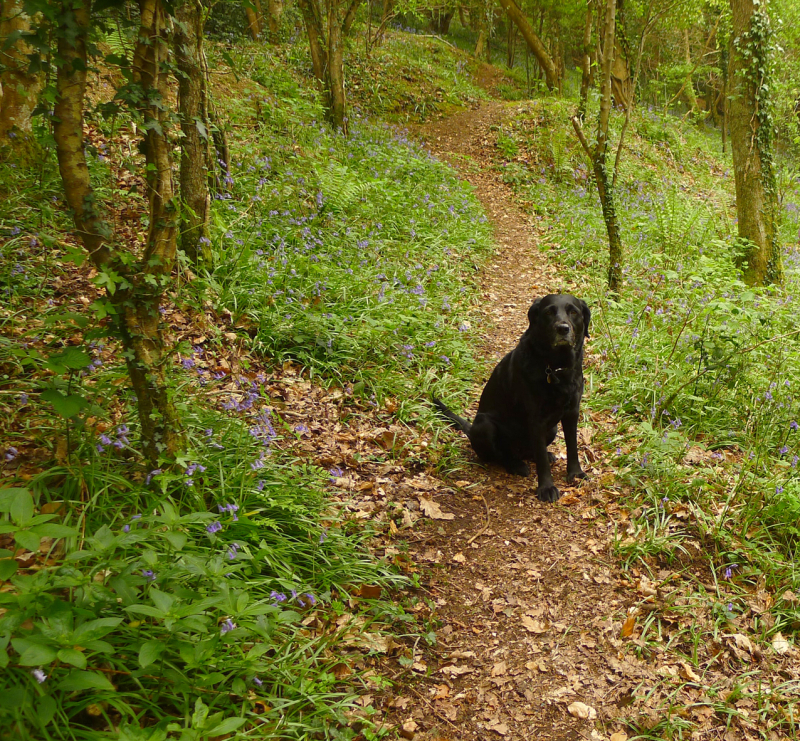 "I can do without being understood," Walsh concludes, "as long as the reader sees green. The problem of being comprehensible is an emotional, an aesthetic problem -- that of making the book adequately embody its meaning: that of getting the reader to 'see green' and making the seeing of green, just thus and then, emotionally meaningful. This is the central problem of literary art." 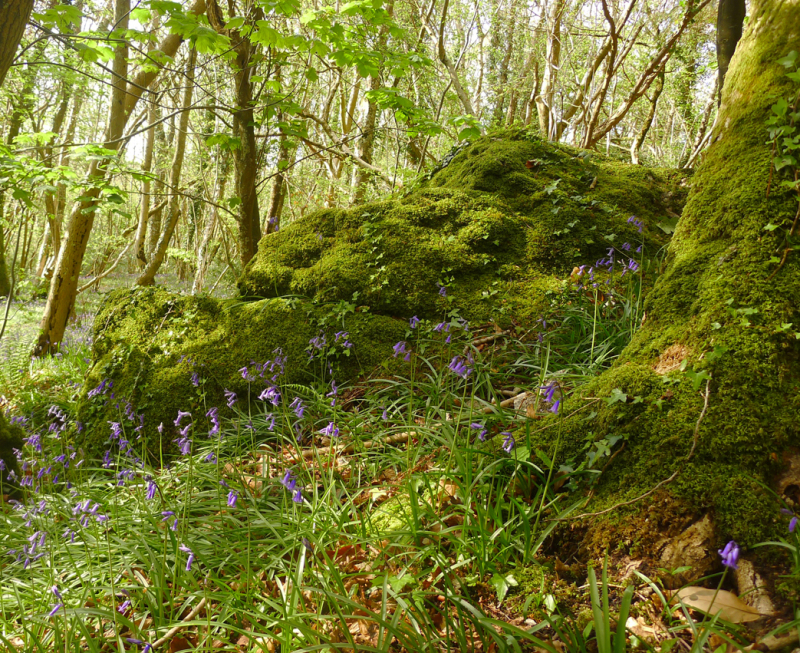 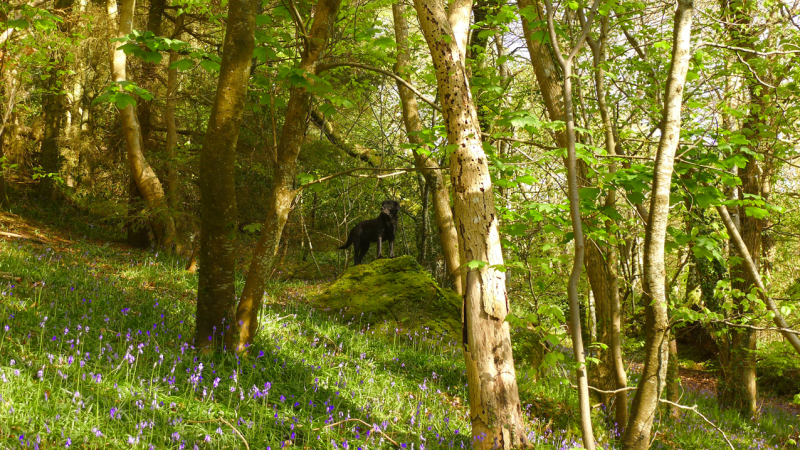 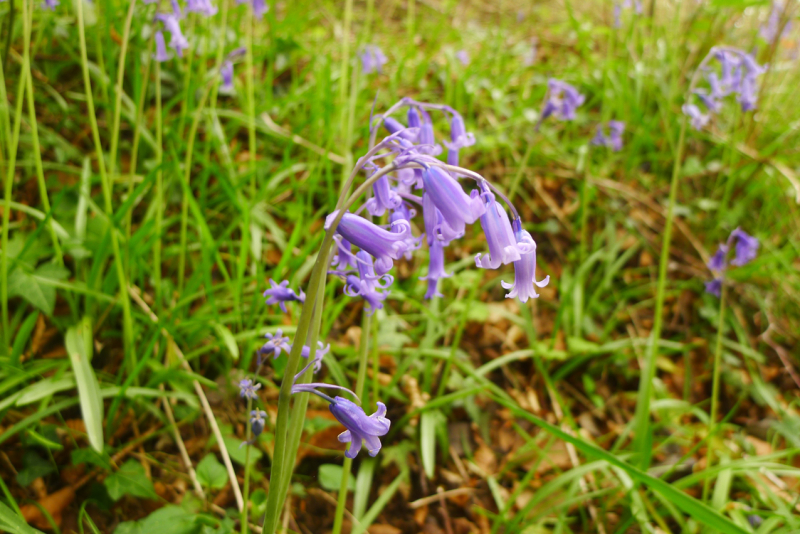 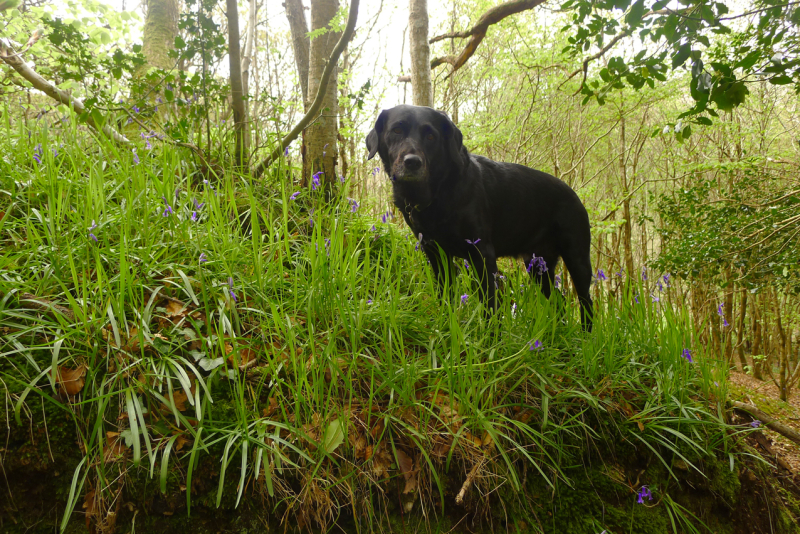 Words: The passages above and in the picture captions are from "Seeing Green" by Jill Paton Walsh, published in The Thorny Paradise: Writers on Writing for Children, edited by Edward Blishen (Kestral Books, 1975); all rights reserved by the author. I recommend seeking out Blishen's book and reading the essay in full. Pictures: Bluebell season in the woods behind the studio. The drawing is an illustration for Heidi by Jessie Willcox Smith (1863-1935).

I love the articulation of "seeing green" as opposed to understanding every bit of a book-- and how we achieve this as writers! I only realized how brilliant Phillip Pullman's His Dark Materials books were when I reread them at age 25, uncovering whole new layers of meaning that had gone right over my head when I first read them at age 10. I think that he could achieve this in part by keeping the narration close to Lyra's point of view at all times, so that as a young reader, you don't mind all the things you don't understand, because you know Lyra doesn't other, but as an adult, you see and can appreciate the bigger picture. But in both cases, the book's green heart comes through... Anyhow, thank you as ever Terri for your reflections here. Your blog is such a treasured resource. x

I long ago understood that I belonged to two of the very few sections of the broad sweep of humanity against whom it is still quite permissable to be prejudiced. Firstly I'm a middle-aged male (apparently I control everything and oppress everybody) and secondly I'm a genre writer. Not only that but I write the lowliest form of genre amongst all genres, because I write for children and young adults. Even when meeting fellow writers it's still possible to detect the condescending sneer on the faces of otherwise quite reasonable people when they hear what sort of books I produce. And yet I think it's fair to say that the vast majority of people who write and love the written word do so as a result of an early introduction to literature in the form of children's books. Without that introduction (some of which is beautifully written and amazingly complex) they might never have begun their own literary journey.

Also this idea of young readers 'seeing green'...well, judging by some of the emails I receive, I would say that the vast majority of them see the entire spectrum without any difficulty at all.

And as for narrative being disapproved of by some of the elite of literature, all I can say is narrative is story-teling and any writer of fiction who fails in that most simple of practices has, in my opinion, failed as a writer.

I too, as Sylvia commented, love the distinction between seeing green and understanding. For me, the example is coming from something very close to home and Myth & Moor. For years I have read, reread and then read again, The Wood Wife. In the layers of words, the threads of poetry, letter writing, narrative, and conversations have been my guidebook and compass for myth-making... seeing the colors of the South West, the tastes of ceremony and the skillful witchery of both the characters and their creator. For years my husband has seen me lose myself in those pages again and again. This spring he asked, "Can I read this now?" after he saw me put the novel down for the thirty-somethingish time. He has been reading The Wood Wife, very slowly, with a hint of green creeping from the roots of his purely white head of hair I know he has been bewitched by the tale and knows now how powerful a master of myth can be.

We, my husband and I, both see the green of a tale that has inspired me for years to be wild in my sight, and the bargain rather than a promise threaded in the novel? That, is a truth that is blue and yellow in unequal measures. Our conversation this morning was about just that practice of bargaining and it took us to such lovely places.

For The Wood Wife, and your musings and invitation to share, thank you Terri.

I've been thinking about this post since reading it a few days ago. I love the idea of "seeing green". So much of my adult life is breaking things apart in thought, discussion, and argument. For me, "seeing green" suggests the whole of experience that children are more able to access. To feel, to be, here in this story, without searching necessarily for more meaning or for what is wrong or broken and how to fix it. Thank you for this post.