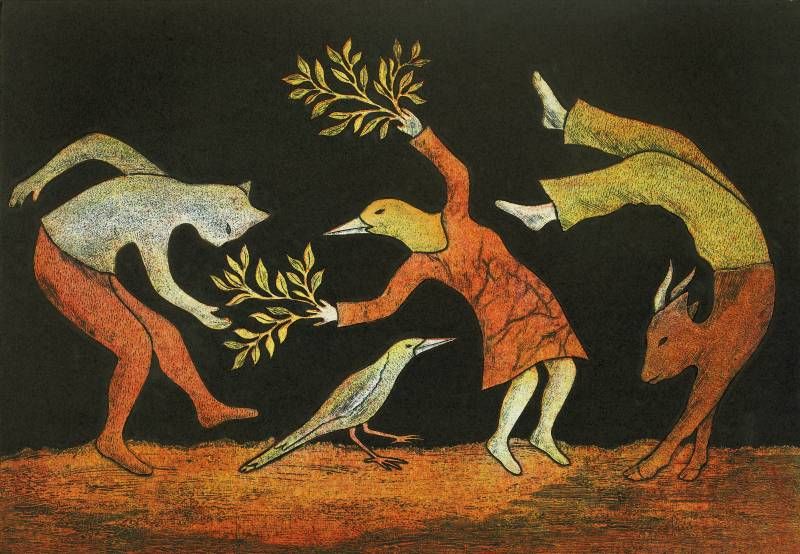 From "First People" by Linda Hogan, an American poet, essayist, and novelist of the Chickasaw Nation:

"When I was younger...I heard stories of the times when humans and animals spoke with one another, but even while I concerned myself always with the lives of animals, caretaking the wounded ones, visiting the healthy, I never gave the old stories as much thought as they deserve. They were just stories, as if stories didn't matter. I didn't think then, as I do now, that a story is a container of knowledge. It is not only how we know about the world, but story is also how we find out about ourselves and our place of location within this world, as species, as Indian people, as women.

According to people who are from the oldest traditions, the relationship between the animal people and the humans is one of most significance. And this relationship is defined in story. Story is a power that describes our world, our human being, sets out the rules and intricate laws of human beings in relationship with all the rest. And for traditional-thinking native peoples, these rules of conduct and taboo are in place to keep a world alive, to ensure all life will continue.

'Once the world was occupied by a species called Ikxareyavs, "First People," who had magical powers. At a certain moment, it was realized that Human Beings were about to come spontaneously into existence. At this point, the First People announced their own transformation -- into mountains or rocks, into disembodied spirits, and above all into the species of plants and animals that now exist in the world....At the same time, it is ordained how the new species, the Human Beings, will live.'   - Mamie Offield (Karok)

"As a young person, I didn't notice the similarity of stories the world over, that the Dineh people say we are the relatives of the animals, and that the aboriginal people of Australia say we are only one of many kinds of people. Nor did the old stories fit with my American education. Even though I was a half-hearted student at best, this education taught what my own, indigenous people once knew were the stories of superstitious and primitive people, not to be believed, not to be taken in a serious light. But we live inside a story, all of us do, and not only does a story prescribe our behavior, it also holds the unfathomed and and beautiful depths of a people, fostering and nurturing the very life of the future. 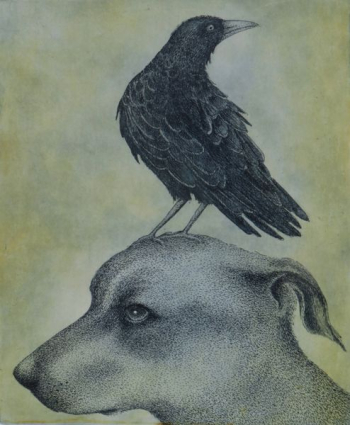 "The traditional native complex of laws and religion creates a way of seeing the world that doesn't allow for species loss, whether animal, plant, or insect. It has also been in the indigenous traditions, the place of ancient stories and ways of telling, that I have found the relationship between between humans and other species of animals most clearly articulated. Or, I might better say that the stories have found me. In this half-century-old Chickasaw woman they have found a ground in which to grow; they have found their place.

"What finally turned me back toward the older traditions of my own and other Native peoples was the inhumanity of the Western world, the places -- both inside and out -- where that culture's knowledge and language don't go, and the despair, even desperation, it has spawned. We live, I see now, by different stories, the Western mind and the indigenous. In the older, more mature cultures where people still live within the kinship circle of animals and human beings there is connection with animals, not only as food, but as 'powers,' a word that can be taken to mean states of being, gifts, or capabilities. 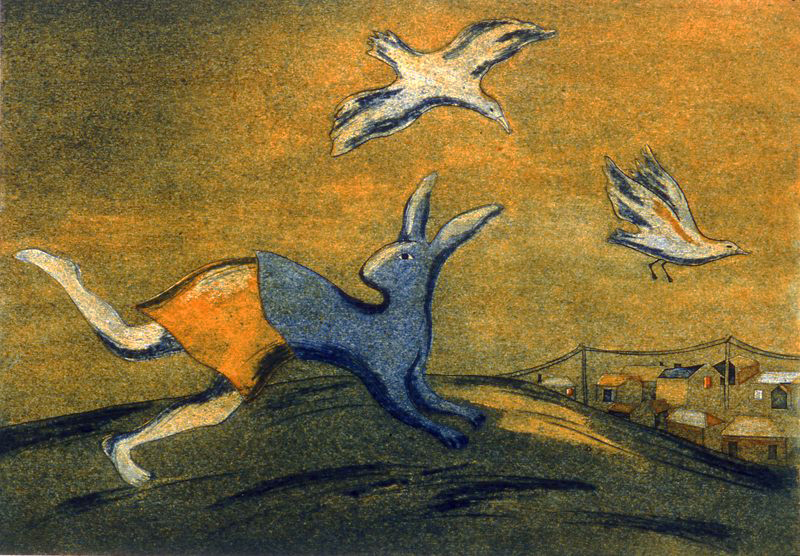 "I've found out too that the ancient intellectual traditions are not merely about systems of belief, as some would say. Belief is not a strong enough word. They are more than that: They are part of a lived experience, the ongoing experience of of people rooted in centuries-old knowledge that is held deep and strong, knowledge about the natural law of Earth, from the beginning of creation, and the magnificent terrestrial intelligence still at work, an intelligence now newly called ecology by the Western science that tells us what our oldest tribal stories maintain -- the human animal is a relatively new creation here; animal and plant presences were here before us; and we are truly the younger sisters and brothers of the other animal species, not quite as well developed as we thought we were. It is through our relationships with animals and plants that we maintain a way of living, a cultural ethics shaped from an ancient understanding of the world, and this is remembered in stories that are the deepest reflections of our shared lives on Earth. 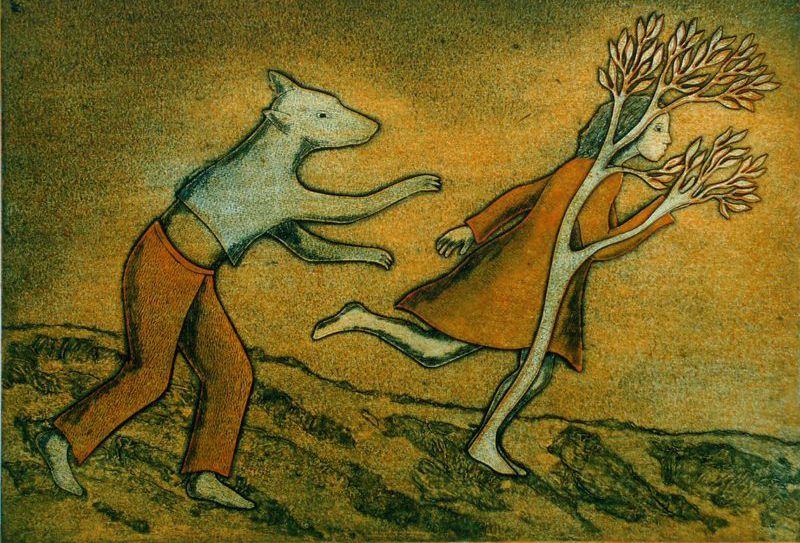 "That we held, and still hold, treaties with the animals and plant species is a known part of tribal culture. The relationship between human people and animals is still alive and resonant in the world, the ancient tellings carried on by a constellation of stories, songs, and ceremonies, all shaped by lived knowledge of the world and its many interwoven, unending relationships. These stories and ceremonies keep open the bridge between one kind of intelligence and other, one species and other."

The beautiful imagery today consists of collographs, etchings, linocuts, and shadow prints by Australian artist Kati Thamo. Born in Western Australia to Hungarian parents, she studied art at Edith Cowan University and the Hobart School of Art, and now lives an works on the far south-west coast. From her website:

"The telling of tales has always been integral to Kati's art practice, and she draws on personal stories and incidents along with grander narratives to devise a form of visual fable. Using a cast of characters including animals and objects, her storylines describe the mystery, frailty, hopefulness and anxiety of life. She says, 'I often think of my images as small theatre settings where various dramas are enacted.' Her art is often imbued with her Eastern European heritage, and a journey to trace her migrant family's homelands in 2010 is reflected in subsequent exhibitions, and in the development of a series of works. More recently, Kati has been exploring the natural world, looking at ways to depict the fragility and complexity of natural ecosystems." 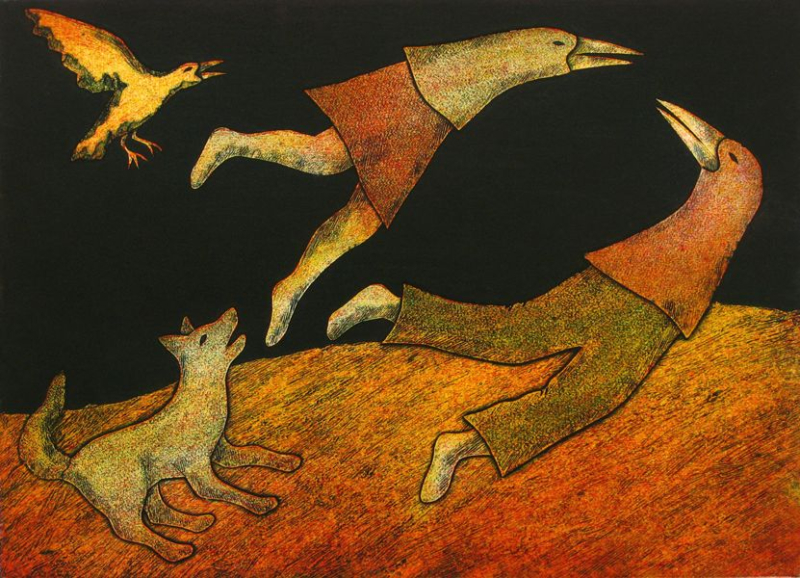 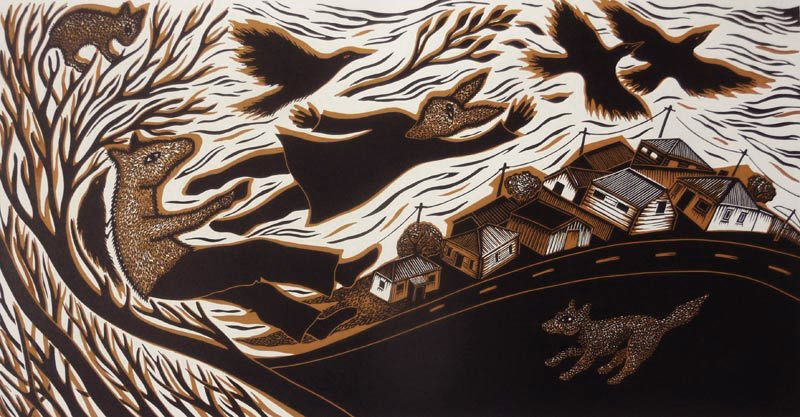 The passage above is from "First People" by Linda Hogan, published in Intimate Nature: The Bond Between Women & Animals, edited by Linda Hogan, Deena Metzger, and Brenda Peterson (Fawcett Columbine, 1998), which I highly recommend. All rights to the text and art above reserved by the author and artist.

The Cat Talks to Me

The cat, black and white
and feisty, leaned heavily
against the wall
as if fearing her legs
would not hold her up.
My daughter took her
to the emergency room
where they heard
the cat's heart murmur.

"Threw a blood clot,"
they said, though she
looked unable to throw
anything, who used to
throw her weight around
being the alpha
to a much larger male.
We Yolen women are like that.
"Take her home," was the advice.

Next day my daughter
needed to go into town
so I went next door,
found the cat asleep
under the covers,
then lay down beside her,
till she felt secure enough
to curl into the place
where my breast and arm meet.
That shielding of the heart.

It was then she spoke,
her voice a murmur, a purr,
a plaint, a satisfaction--
all of these. I understood.
We were heart to heart
in that small space,
where fur is no obstacle
to intimate conversation,
vestigial tail twitching
till it twined with hers.

This poem is really lovely. Thank you!

PS The cat seems to be doing well.

Thank you, these words and this way of living are absolutely true and right, I feel that down to my bones. I was just thinking how encountering any wild animal brings me instant happiness, and often a sense of wonder. Maybe it is a recognition of our relationship at a heart level, and a longing to be reunited as peoples, human and more-than-human.

Thanks for your lovely page. It deepened my knowledge of the paths I felt I was treading alone or without human company. You tell a good story and I am glad to be in it.

First, I am so glad to hear the cat is doing well! Secondly, this poem is so beautifully woiced showing how the bond between human and animal is intimately formed during times of struggle or need. The animal possesses instincts we have forgotten or not yet awakened within ourselves. This passage moved me very deeply --

It was then she spoke,
her voice a murmur, a purr,
a plaint, a satisfaction--
all of these. I understood.
We were heart to heart
in that small space,
where fur is no obstacle
to intimate conversation,

Thank you for sharing this very moving poem! As always, your depth of perception and wisdom underscore the theme and allow the reader to feel their intensity.