Holding the world in balance
Tunes for a Monday Morning “We need another and a wiser and perhaps a more mystical concept of animals. We patronize them for their incompleteness, for their tragic fate of having taken form so far beneath ourselves. For the animal shall not be measured by man. In a world older and more complex than ours, they move finished and complete, gifted with extensions of the senses we have lost or never attained, living by voices we shall never hear. They are not brethren, they are not underlings; they are other nations, caught with ourselves in the net of life and time, fellow prisoners of the splendour and travail of the earth.”  - Henry Beston (The Outermost House) 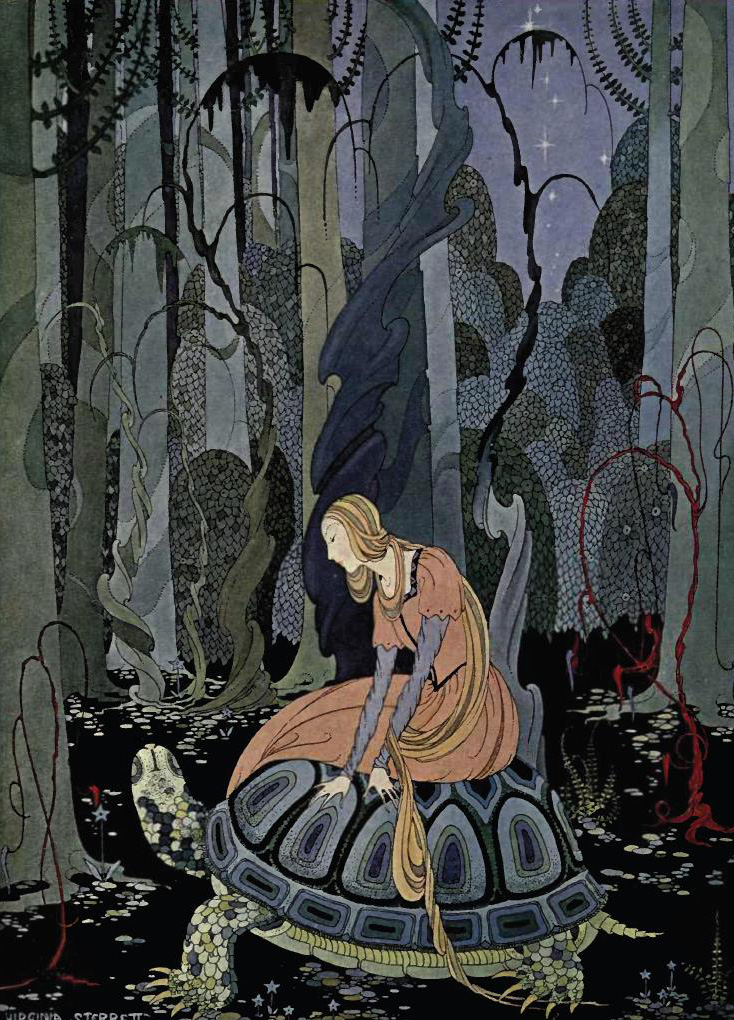 “How monotonous our speaking becomes when we speak only to ourselves! And how insulting to the other beings – to foraging black bears and twisted old cypresses – that no longer sense us talking to them, but only about them, as though they were not present in our world…Small wonder that rivers and forests no longer compel our focus or our fierce devotion. For we walk about such entities only behind their backs, as though they were not participant in our lives. Yet if we no longer call out to the moon slipping between the clouds, or whisper to the spider setting the silken struts of her web, well, then the numerous powers of this world will no longer address us – and if they still try, we will not likely hear them.”  - David Abram (Becoming Animal) 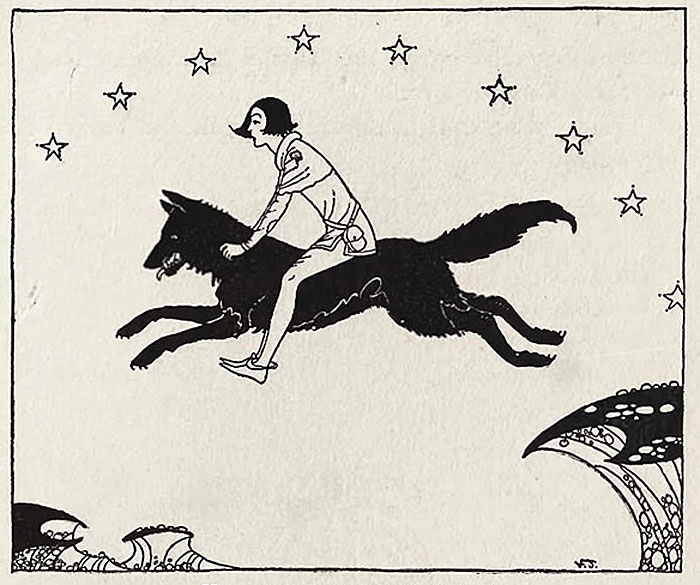 "Maybe it's animalness that will make the world right again: the wisdom of elephants, the enthusiasm of canines, the grace of snakes, the mildness of anteaters. Perhaps being human needs some diluting."  - Carol Emshwiller (Carmen Dog) 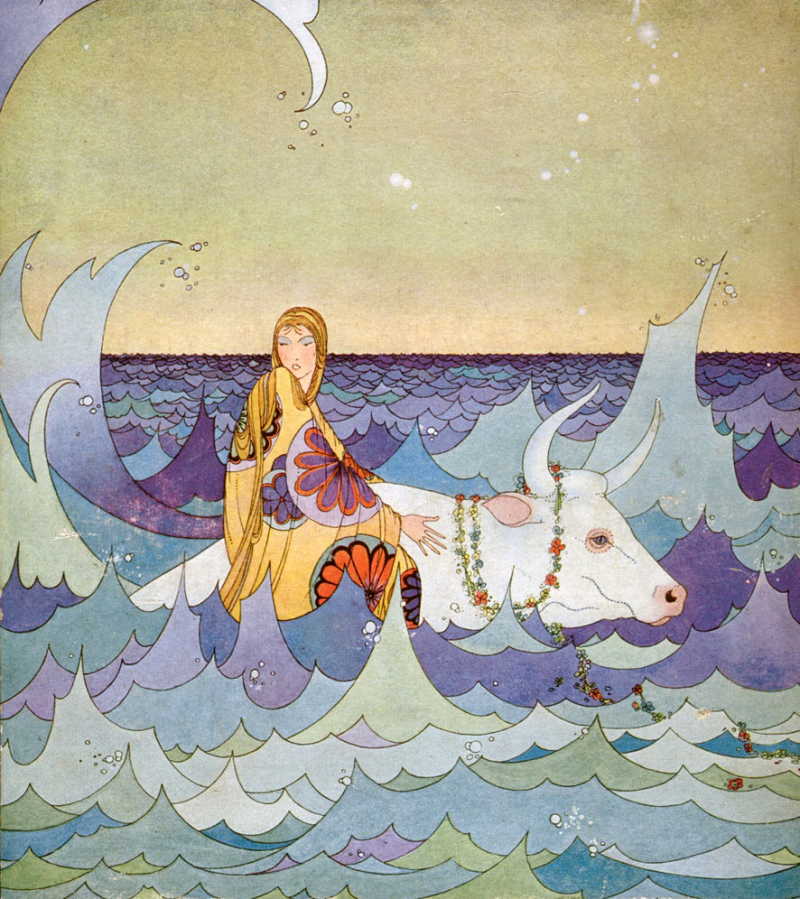 The art today is by American illustrator Virginia Frances Sterrett (1900-1931), who was born Chicago, but raised in Missouri after the early death of her father. She studied briefly at the Art Institute of Chicago, receiving a full scholarship when she was just 15 -- but had to leave when her mother grew ill and she took on sole support of her family. She worked in Chicago's advertising industry, and obtained her first book commission at the age of 19: illustrating Comtesse de Ségur's Old French Fairy Tales for the Penn Publishing Company in 1920, followed by Nathaniel Hawthorne's Tanglewood Tales in 1921.

At the same time Virginia's own health was failing and the diagnosis was grim: tuberculosis. The family moved to the warm, dry climate of California, but her health grew worse and worse, and she entered a sanatorium in Pasedena at age 24. She continued to work, but her output slowed, and her third book, The Arabian Nights, was not published until 1928. She was working on her last commission, Myths & Legends, when she died in 1931. 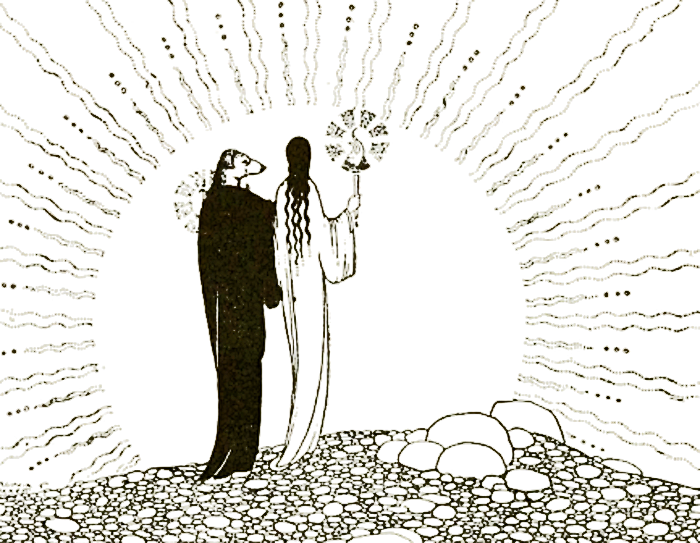 In a tribute to Sterrett, the Saint Louise Post-Dispatch reported: "Her achievement was beauty, a delicate, fantastic beauty, created with brush and pencil. Almost unschooled in art, her life spent in prosaic places of the West and Middle West, she made pictures of haunting loveliness, suggesting Oriental lands she never saw and magical realms no one ever knew except in the dreams of childhood....Perhaps it was the hardships of her own life that gave the young artist's work its fanciful quality. In the imaginative scenes she set down on paper she must have escaped from the harsh actualities of existence." 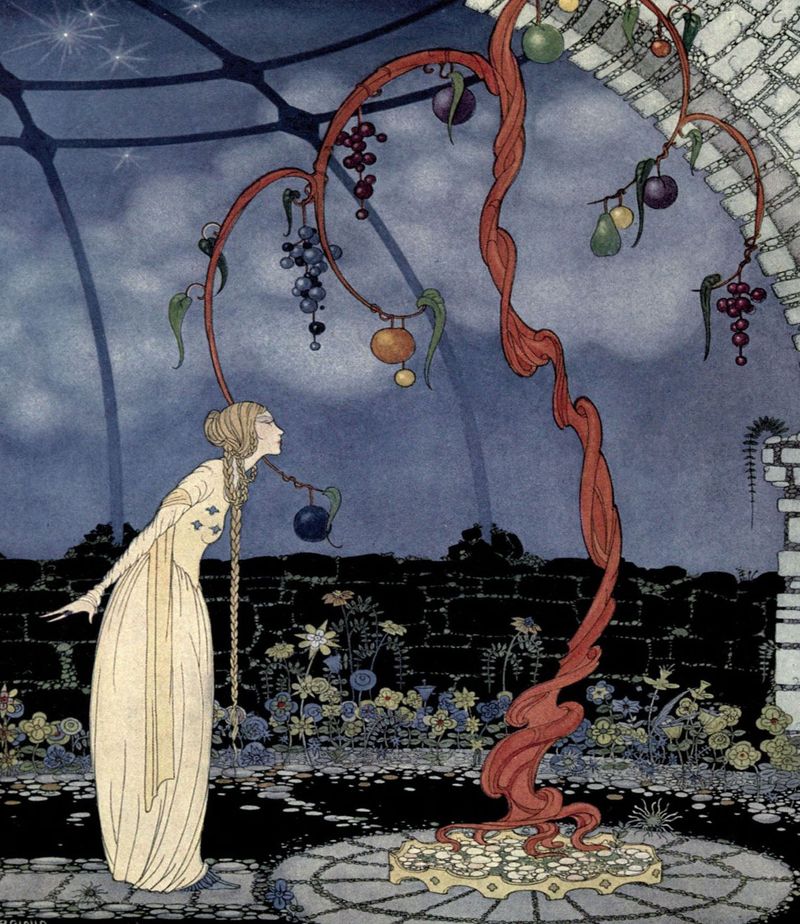 The quotes above first appeared on Myth & Moor in 2012, reposted today with updated art.

Maybe it's animalness that will make the world right...
Carol Emshwiller

One woman knows
her horses and wolves,
another her coyotes
and mountain lions.

They discuss their habits,
instincts and shadows
haunting field or butte
in the moonlight,

how they move in a wind
that blends the scent
of tame and wild;

I can't compete
but remember the crows
in my garden.

How one lingered
on the desert pine,
still and elegant,

his head bent, his beak
curved like the spout
of a dallah

drawing sky and viewer
into his presence, prompting me

to partake
of the moment
and celebrate a story

that could be overlooked, so
easily interred
in the white noise of routine.

Thank you Terri, this week's animal posts are close to my heart, at the center of my concerns. I picked up a copy of the Sterrett illustrated French Fairy tales in the rare book room at Strand after first seeing the picture of woman with the deer and on the tortoise here at myth and moor. Many thanks and hope you are well.

It is difficult to express how deeply this rings in my soul, Terri. Thank you so much...Henry Beston is an old friend, one of my first inspirations as a naturalist, and David Abram a newer one.

Thank you. Your work is always inspiring.

That is a lovely poem which I would like to share. I can't quite make out who the author is or what the title is. I've hunted the net and it always just leads me back here. Is this your poem? Can I share it?

I am so glad you liked this poem -- and it is titled, "Over Lunch" and I am the author. I was inspired to write this poem by not only the articles this past week on the importance and influence of the animal world in our human lives, but also a real luncheon with some women who really knew about coming close to the wild and natural world. And please, free to share this, I would be honored to have it viewed by others. Thank you!!

and just a quick mention, I should have put quotation marks around the epigram quote by Carol Emshwiller, (as her perspective really influenced me as well) but I forgot and with plain text in the comment box, there is not an italics feature.

I am stuck now "in the white noise of routine" and this poem has lifted me up. Thanks Wendy

So glad this poem can help as I have been there myself, recently. Thank you so much for reading and commenting. I always enjoy hearing from you!

Absolutely beautiful images. So sorry she passed away so young. Thank you, Terri.